Nail matrix disorders are common in dermatological practice. Their clinical manifestations include leukonychia, melanonychia, Beau′s line, trachyonychia, nail lichen planus, et al. [1],[2] Nevertheless, nail biopsy and histopathology have received little attention in the dermatologic literature. This may result from patients′ apprehension, such as pain from the procedure, a risk of scarring or morphologic change of the nail after nail surgeries, and the physicians′ unconcern for many different nail diseases and lack of experience about pathologic findings of nail diseases. [3],[4],[5]

Dermatologists have traditionally taken the nail matrix tissue by exposing the nail matrix after incising the proximal nail fold. [1],[2],[3],[4],[5] Although this has offered much more histopathological information to dermatologists and shown a high success rate in achieving a diagnosis, it has many disadvantages. First, the method is a complex one which needs expert skills of the operator because it needs several steps until exposure of the nail matrix, so called cul-de-sac. Second, because of the anesthesia which needs much amount of local anesthetic, the patients surely suffer from harsh pain during injection. Third, the traditional nail matrix biopsy leads to decrease in the size of the nail plate, eventually. Therefore, the patient may undergo cosmetic problems. Finally, a long period of wound healing is necessary and a postoperative scar may result.

Hence, we introduce a simple but informative method for patients with nail matrix disorders [Figure - 2]. After achieving local anesthesia that does not need lots of anesthetic as compared to the conventional method, we performed two 2-mm punch biopsies on the proximal nail fold for taking proximal nail matrix tissue. Considering the individual difference of the location of the nail matrix, we chose two different punch biopsy sites from the proximal nail fold. The 2-mm punch was advanced down to the nail matrix until the physician got the feeling of touching bone. Then, we punched through the nail plate of lunula to the underlying tissue using a 2-mm punch to obtain the distal nail matrix. Without suturing, a simple dressing with topical antibiotics was needed for three to five days. The advantages of our technique are: it is less painful, has a rapid healing time, there is almost no risk of scarring and morphological change.

We adapted this simple technique for 18 patients which yielded the satisfactory results without exposing nail matrix. As a result we found that 17 out of 18 nail specimens contained the nail matrix (94.4%). Almost histological findings were consistent with clinical diagnoses. The method especially benefited to classify twenty-nail dystrophy into several histological types [Table - 1]. It shows a relatively high success rate in achieving a diagnosis, considering that 2-mm specimens are prone to crush injury during handling and are hard to interpret. However, matrix tissue was sometimes missing in tissue specimens because of its fragility and size. Thus we are developing an advanced technique to reduce the loss of tissue. Another limitation is that it is not suitable to be applied to a malignancy such as acral lentiginous melanoma because blind technique may not capture the atypical area of the lesion, correctly. In general, malignant lesions may be clinically distinguish from other benign lesions by using other devices such as dermoscopy, clinicians can choose more invasive and conventional technique to the doubtful cases. Therefore, our less invasive technique could be widely applicable to various benign nail disorders especially involving the nail matrix, like twenty-nail dystrophy and median nail dystrophy, and it can provide histopathologic information of whole nail tissues. The dorsal portion of the proximal nail fold, ventral part of the proximal nail fold, and the proximal nail matrix are sequentially shown in the specimen from the proximal nail fold [[Figure - 3]a]. The specimen from the lunula shows the distal nail matrix just beneath the nail plate [[Figure - 3]b]. 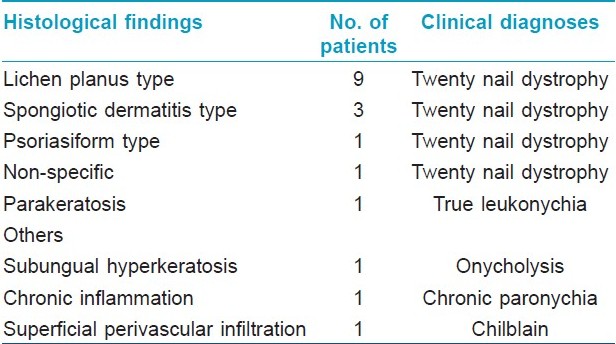 Since early 2009, we have got useful histopathologic findings from patients with various nail disorders through this technique. So far, no complications concerning the procedure have occurred and the physicians and the patients are all satisfied.

In summary, the proximal nail fold-lunula double punch technique is both, a physician- and patient-friendly diagnostic tool. This enables the physician to take nail biopsies more easily and to detect more histopathologic findings of inflammatory nail disorders in the future.