Background: Oral minocycline has been recently shown to halt disease progression in active vitiligo. Aims: The present study was planned to compare the efficacy and tolerability of oral minocycline with oral mini pulse (OMP) corticosteroids in active vitiligo. Methods: A total of 50 patients with actively spreading vitiligo were randomized to receive either minocycline 100 mg/day (Group I - 25 patients) or OMP 2.5 mg dexamethasone on 2 consecutive days in a week (Group II - 25 patients) for 6 months. These were followed-up at every 2 weeks interval. Mean vitiligo disease activity score (VIDA) and mean Vitiligo Area Scoring Index (VASI) were assessed in all patients in addition to the photographic comparison before and after treatment. Results: Both groups showed a significant decrease in VIDA from 4.0 to 1.64 ± 0.86 (P < 0.001) in Group I and from 4.0 to 1.68 ± 0.69 (P < 0.001) in Group II. However, the difference between the mean VIDA scores in the two groups was not statistically significant (P = 0.60) at the end of treatment period. The mean VASI declined from 1.71 ± 1.45 to 1.52 ± 1.43 Group I (P = 0.06) and from 1.39 ± 1.31 to 1.17 ± 1.34 in Group II (P = 0.05). The difference between VASI in Group I and II was not significant at the end of 24 weeks of treatment (P = 0.11). Conclusion: Both dexamethasone OMP and oral minocycline are effective drugs for managing the arrest of disease activity in vitiligo.
Keywords: Minocycline, oral mini pulse, vitiligo

Vitiligo is an acquired, often heritable disorder of melanogenesis that occurs due to a complex interaction between environmental and genetic factors leading to melanocyte destruction and the characteristic depigmented lesions. The profound cosmetic disfigurement produced can lead to an increased sense of humiliation, loss of self-esteem and an impaired quality of life. A definitive cure of vitiligo remains elusive despite progress in our understanding of the disease pathogenesis. Recently, epidermal oxidative stress has been documented in vitiligo patients and it has been postulated that a free radical-mediated damage acts as an initial pathogenic event in melanocyte degeneration in vitiligo. [1]

Management of actively spreading vitiligo involves limiting the spread of disease followed by repigmentation of the lesions. Corticosteroids given systemically, either daily or in pulsed form have been found to be effective in controlling the activity of disease. [2] Oral Ginkgo biloba has been reported to be effective in patients with limited and slow spreading disease. [3] Recently it has been shown that minocycline can rescue melanocytes from oxidative stress in vitro. [4] An open-labeled prospective study involving 32 patients showed the effectiveness of minocycline 100 mg/day in arresting the spread of disease activity in vitiligo. [5] The present study was designed to evaluate the efficacy and tolerability of oral minocycline and compare it with oral mini pulse (OMP) corticosteroids in patients of vitiligo vulgaris with actively spreading disease.

This was a prospective, randomized study of 6 months duration. Approval was taken from the institute′s ethical committee before initiating the trial. Patients with a clinical diagnosis of vitiligo vulgaris attending the pigmentation clinic at our department were screened for recruitment in the study.

Patients receiving topical or systemic therapy for vitiligo were given a wash-off period of 2 weeks and 4 weeks respectively prior to recruitment into the study. Patients were recruited in this study irrespective of gender, duration and previous therapy.

A detailed history and clinical examination was performed, which included the age at onset of vitiligo, duration of disease, presence of family history or any other associated illness, extent of BSA involvement and presence of mucosal involvement. A total of 50 consecutive patients who satisfied the inclusion and exclusion criteria were recruited and subsequently randomly assigned to one of the two treatment groups of 25 each. Randomization list was generated using the random number table.

Group I - Patients in Group I received minocycline 100 mg/day.

No topical therapy or phototherapy was allowed during the study period. Patients were followed up at 2 week intervals to assess for the stability of disease and extent of repigmentation. The treatment was continued for 6 months.

At each visit, repigmentation in each topographical area was assessed by standard protocol of digital photography and by using Vitiligo Area Scoring Index (VASI). [8]

The VASI for each body region is determined by the product of the area of vitiligo (in hand units) and the extent of depigmentation within each hand unit measured patch.

Repigmentation was graded as no improvement; minimal, less than 25%; mild, 26-50%; moderate, 51-75% and marked to complete improvement, more than 75%. Photographic documentations were collected using a digital camera before and throughout the study period at 2 weeks interval for the first 2 months to assess the initial response. Thereafter, photographs were taken at 4 weekly intervals for the rest of the study period.

The statistical analysis was carried out using statistical product and service solutions (SPSS Inc, chicago. IL) Version 17.0 for windows. Normality of data was checked by measures of Kolmogorov Smirnov tests of normality. For normally distributed data means were compared using Student′s t-test for two groups. For skewed data or for scores, Mann-Whitney test was applied for two groups. Qualitative or categorical variables were described as frequencies and proportions. Proportions were compared using Chi-square test. All statistical tests were two-sided and were performed at a significance level of α =0.05.

[Figure - 1] shows the flow diagram of the study. In this study, 50 patients with the clinical diagnosis of active vitiligo were included and were randomly allocated to two treatment groups. The youngest patient was 14 years and oldest 55 years. All patients completed the study period of 6 months and were included in the final analysis. Demographics and disease parameters of patient in the groups are given in [Table - 1]. There was no significant difference between the two groups based on any of the baseline characteristics [Table - 1]. The mean age was 35.20 ± 14.1 years (range 14-55 years) in Group I and 25.96 ± 12.53 years (range 14-49 years) in Group II (P = 0.18). Of the 50 patients, 4 (16%) patients in Group I and 8 (32%) patients in Group II complained of mild itching in the lesions. Five (10%) patients reported trauma as a precipitating factor. Only 7 (14%) patients had other diseases associated with vitiligo, diabetes mellitus type II was present in 4 (8%) patients and hypothyroidism was found in 2 (4%) patients. Four (16%) patients had family history of vitiligo in first degree relatives. 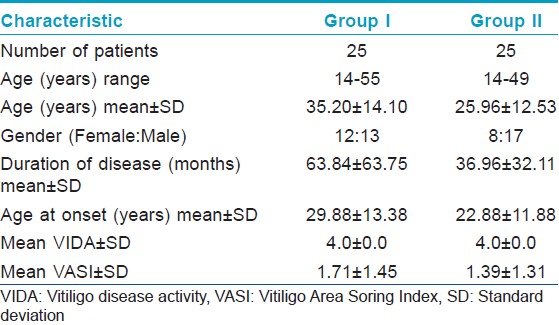 At 0 week, both groups had VIDA + 4 (P = 1.0); that means new lesions appeared since last 6 weeks or less. Using Wilcoxon signed rank test, both groups showed a significant decrease in VIDA after 24 weeks of treatment with the mean VIDA decreasing to 1.64 ± 0.86 (P < 0.001) in Group I and to 1.68 ± 0.69 (P < 0.001) in Group II. However, the difference between the mean VIDA scores in the two groups was not statistically significant (P = 0.60) at the end of treatment period. Patients in both groups showing similar reduction in VIDA score [Figure - 2]. Of 25 patients in Group I, 6 (24%) patients continued to develop new lesions while only 3 (12%) patients in Group II developed new lesions during the study period; though the difference was not statistically significant (P = 0.46). During follow-up period, out of 9 visits as mentioned in [Table - 2], at none of visit the difference between two groups showed statistically significant difference. [Figure - 3], [Figure - 4], [Figure - 5] and [Figure - 6] illustrate the pre-treatment and post-treatment photographs of the patients in the two groups.

The precise pathogenesis of vitiligo is yet an enigma. For effective treatment of vitiligo, it is as important to arrest the activity of the disease initially during the course of disease, as it is to induce repigmentation. Active vitiligo involves either an expansion of existing lesions or appearance of new lesions. Although various studies have demonstrated that local application of corticosteroids can induce repigmentation in vitiligo in nearly 50% of patients, their role in arresting the disease activity is doubtful. Corticosteroids given systemically in adequate doses have been found to be effective in controlling the activity of disease in many studies. [2],[9],[10],[11],[12],[13] Several dosages of systemic corticosteroids have been formulated in managing active vitiligo. These include low dose daily prednisolone, intravenous methyl prednisolone pulse and dexamethasone OMP.

Kim et al. used low dose prednisolone (0.3 mg/kg/day for 2 months followed by tapering of oral steroids) and showed a halt in disease progression in 87% patients and repigmentation in nearly 70% of the patients. [10] Seiter et al. [11] found that administering methylprednisolone 8 mg/kg intravenously for 3 days in patients with generalized vitiligo led to cessation of disease progression in 85% and repigmentation in 71%. The earliest study done on controlling activity of vitiligo by OMP corticosteroids done by Pasricha et al. was encouraging with progression of the disease arrested in 89% of the patients within 1-3 months of treatment. [2] Since then it has been used by a number of independent researchers with variable results. [12],[13] Kanwar et al. [13] used OMP in 32 patients and reported that in 14 patients new lesions stopped appearing and there was mild to moderate repigmentation while 18 patients showed no response. No side effects pertaining to OMP treatment were observed. One of the main advantages of the OMP treatment schedule is its simplicity as it requires oral administration of medication on only two days in a week. Systemic corticosteroids may also produce many unacceptable side effects, although OMP corticosteroids are considered to have a better side effect profile.

In active vitiligo patients, both an imbalance of the intracellular redox status and a significant depletion of enzymatic and non-enzymatic antioxidants lead to an abnormal oxidative stress. [10] Minocycline possesses a wide repertoire of anti-inflammatory and immunomodulatory actions. The mechanism of action is complex and incompletely understood and includes inhibition of free radical and cytokine production, interference with protein synthesis and modulation of matrix metalloproteinases activity. More recently, minocycline was also shown to possess potent anti-apoptotic properties manifested by inhibition of caspase 1 and 3 expression and direct blockade of cytochrome c release from mitochondria. [14] It has been shown that antioxidant and direct radical-scavenging activity of minocycline contributes toward neuroprotection in some cell based assays. [15] Both oxidative stress and apoptosis have been shown to play a significant role in the pathogenesis of vitiligo. Thus, minocycline offers a unique and potentially powerful approach to the management of arresting the activity of the disease.

The pilot study done on oral minocycline in treatment of vitiligo by Parsad and Kanwar [5] showed an arrest in the progression of disease in 29/32 patients and only three patients showed development of new lesions and/or enlargement of existing lesions. We observed that of the 25 patients in minocycline group, only 6 (24%) patients developed new lesions during 24 weeks of follow-up period, whereas in OMP group only 3 (12%) patients showed activity of disease (P = 0.46). Patients in both the groups showing similar reduction in VIDA score. Similarly, patients in both the groups showed a similar reduction in VASI at the end of 24 weeks of follow-up period. The results obtained by us in minocycline group were comparable to those observed in previous study by Parsad and Kanwar. One of the limitations of the present study is the lack of any placebo group. However, when compared with historical controls (i.e., placebo group in a study by Agarwal et al. [6] ), both OMP and minocycline group showed highly significant better efficacy compared with the placebo (P < 0.001). The power of the study was calculated based on comparing our study groups with previous study placebo group. The power of the study came out to be 79% at confidence interval of 95% with sample size of 25. [6]

The results of our study reiterate the fact that minocycline is an effective and safe drug to control the activity of vitiligo with relatively mild adverse effects of nail, facial and oral mucosa hyperpigmentation and nausea. Oral corticosteroids administered as OMP corticosteroids are also effective in halting the activity of vitiligo with results comparable to oral minocycline. Although, OMP given as twice weekly regimen may offer an advantage over daily administration of minocycline in terms of adherence to treatment yet the latter may be a safer option if the treatment needs to be continued for a longer duration. To the best of our knowledge, our study is the first to compare the efficacy and tolerability of oral minocycline with OMP corticosteroids.

Both low dose dexamethasone OMP and oral minocycline are safe and effective drugs for the management of arresting the activity of vitiligo with a few mild side-effects. However, since the study was relatively short i.e., 24 weeks of follow-up, long-term studies are needed to know the recurrence of activity of the disease.