Relevance of patch testing in patients with nummular dermatitis 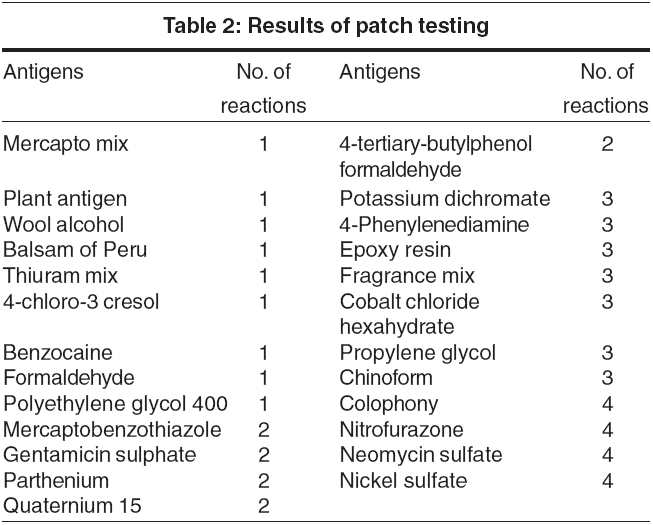 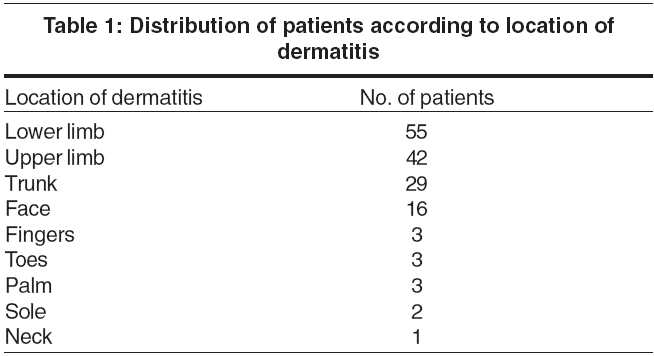 Nummular dermatitis, also known as discoid eczema, is a common type of endogenous eczema. It was first described by Rayer in 1845 but the term was introduced by Devergie in 1857.[1] It is characterized by coin shaped or oval plaques with a clearly defined border. The etiology is obscure and a number of factors have been proposed as causative agents. Contact sensitivity to a number of substances is one of the etiological factors.[1] This study aims at finding the incidence of allergic contact dermatitis in patients with nummular eczema.

Readings were taken on Day 2 (48 hr) and Day 4 (96 hr) and interpreted according to ICDRG criteria.[3] Reactions on Day 4 were taken as significant. The relevance of positive reactions was explained to patients as being relevant to the present dermatitis, due to past exposure, or as significant reactions yet to prove their relevance and a source of caution against future exposure.

Of the 78 patients who participated in the study, 39 each were male and female. The youngest patient was 2 years old and the oldest was aged 84 years (mean age, 38.04 years). Most patients were in the age group of 21-50 years. Dermatitis was present in almost all the sites, with the lower and upper limbs being the commonest affected sites [Table - 1]. Forty-five patients had involvement of more than one site while 31 patients had only one site involved.

Of the 50 patients who were patch tested, a reaction was seen in 23 patients. In all, 56 reactions were seen, the most common allergens being nickel sulfate, neomycin, nitrofurazone and colophony [Table - 2]. Nine patients reacted to one antigen while 14 patients reacted to more than one [Table - 3]. Reactions to topical medications, cosmetics and toiletries constituted about 64% of the reactions (cosmetic antigens, 17.85%; toiletry antigens; 10.7%; and topical medications, 35.7%).

Shenoi et al found that the common sensitizers in patients with allergic contact dermatitis were gentamicin, potassium dichromate, colophony and fragrance.[13] In a study by Fleming et al, 50% of 48 patients with nummular dermatitis showed positive patch test reactions and 33% of these were considered clinically relevant. The commonest allergens were rubber chemicals, formaldehyde, neomycin, chrome and nickel.[14] Khurana et al found that 50% of 56 patients with nummular dermatitis showed positive reactions on patch testing, the commonest allergens being potassium dichromate, nickel, cobalt chloride and fragrance mix in decreasing order.[15] In our study, two-thirds of patients with nummular dermatitis required patch testing and about half of them showed significant reactions. Two-thirds of these reactions were to antigens in cosmetics, toiletries and medications that would remain in prolonged contact with the skin. The antigens include the following:

l Balsam of Peru used as fixative and fragrance in perfume, topical medications

l Benzocaine, a local anaesthetic which cross reacts with parabens

l Formaldehyde used as a preservative in cosmetics, shampoos, etc.

l Nitrofurazone, a topical antibiotic which indicates past exposure

l Quaternium 15, a preservative in many cosmetics, topical medicines

Patients with nummular dermatitis are at increased risk of developing secondary contact dermatitis due to impaired barrier function that contributes to the chronicity and severity of dermatitis. Patch testing has the potential to increase the quality of life in these patients. Therefore, it is recommended that patients with chronic, recalcitrant nummular dermatitis be patch tested.