Relevance of trichoscopy in the differential diagnosis of alopecia: A cross-sectional study from North India

Background: Trichoscopy is an office tool used in the diagnosis of alopecia but its utility has not been assessed. Objectives: To compare the trichoscopic characteristics of different types of alopecia, identify features of diagnostic value, and to determine the utility of trichoscopy in the diagnosis of alopecia. Methods: A descriptive cross-sectional study was performed in patients with alopecia. After clinical assessment and relevant investigations, trichoscopy was performed using a non-polarized trichoscope (×10). The utility of trichoscopy in difficult cases of alopecia was assessed statistically. Results: One hundred and twenty patients of alopecia (90 non-cicatricial, 30 cicatricial) were recruited. The diagnosis was made on the basis of a detailed history and clinical examination, and confirmed by biopsy and relevant investigations in difficult cases. Yellow dots (63.3%) were the most common trichoscopic feature followed by thin hair (40.8%). Among the 21 difficult cases of alopecia, trichoscopy was diagnostic in 19 (90.5%). Statistically significant features on intergroup comparison included black dots (Fischer's exact test, P< 0.001), cadaverized hair (P = 0.024), exclamation mark hair (P < 0.001) in alopecia areata; diameter diversity more than 20% (P < 0.001) and thin hair (P < 0.001) in androgenetic alopecia; broken hair of different lengths (P < 0.001), frayed hair (P < 0.001), split ends (P < 0.001) in trichotillomania; comma hair (P < 0.001) in tinea capitis and arborizing blood vessels in discoid lupus erythematosus (P = 0.012). Limitations: The small number of patients in some types of alopecia was a limiting factor. Conclusions: Trichoscopy is useful in the differential diagnosis of alopecia. Among the various trichoscopic findings, those of diagnostic value were identified.
Keywords: Alopecia, cicatricial, dermoscopy

Consecutive patients with alopecia attending the dermatology out-patient department at the All India Institute of Medical Sciences, New Delhi, between September 2012 and March 2014 were studied. Ethical clearance was obtained from the Institutional Ethics Committee. For this study, alopecia was defined as visible thinning or loss of hair from the scalp. Patients who did not consent, uncooperative children and patients with active secondary bacterial infection in the alopecic patch were excluded. Two dermatologists independently assessed each patient clinically as well as with a hand lens (×4), recorded the history and examination findings on a proforma and made a diagnosis. When there was a doubt in the diagnosis, the patient was labeled as “difficult case” and a biopsy was performed. Skin biopsies were performed in all cases of cicatricial alopecia. Hair shaft microscopy (in hair shaft disorders), trichogram (in telogen effluvium) and hormonal profile (in female pattern hair loss) were performed when indicated. Standard textbook criteria were followed while making a diagnosis. Trichoscopy was performed with a non-polarized Heine delta 20 mini dermoscope (10× magnification) using liquid paraffin as the contact medium. The center and periphery of the alopecic patch were examined by trichoscopy and photographs taken using an 8MP Samsung S2 camera (3264 × 2448 pixels, autofocus, LED flash) without and with 4x magnification.

A STATA version 12.1 (Stata corp. 2011. Stata Stastistical Software. Release 12. College station, TX: StataCorp LP) software package was used for statistical analysis. Since the number of patients in each group was small, the Fisher's exact test for categorical data was used for comparative analysis. P < 0.05 was considered significant. The analysis of hair shaft diameter diversity in androgenetic alopecia and diffuse hair loss was done manually. The number of thick and thin hair were counted in each trichoscopic field and the percentage of thin hair was calculated.

The calculation of sample size was complicated by the fact that all types of alopecia were included and the overall prevalence of alopecia in our population was not known. A convenient sample size of 100 was arbitrarily adopted. A total of 120 patients were recruited including 57 men and 63 women. The mean age at presentation was 24.9 years (range: 1–60 years). Ninety patients had non-cicatricial alopecia and the remaining 30 had cicatricial alopecia. The demographic and trichoscopic findings of each type of alopecia are shown in [Table - 1]. 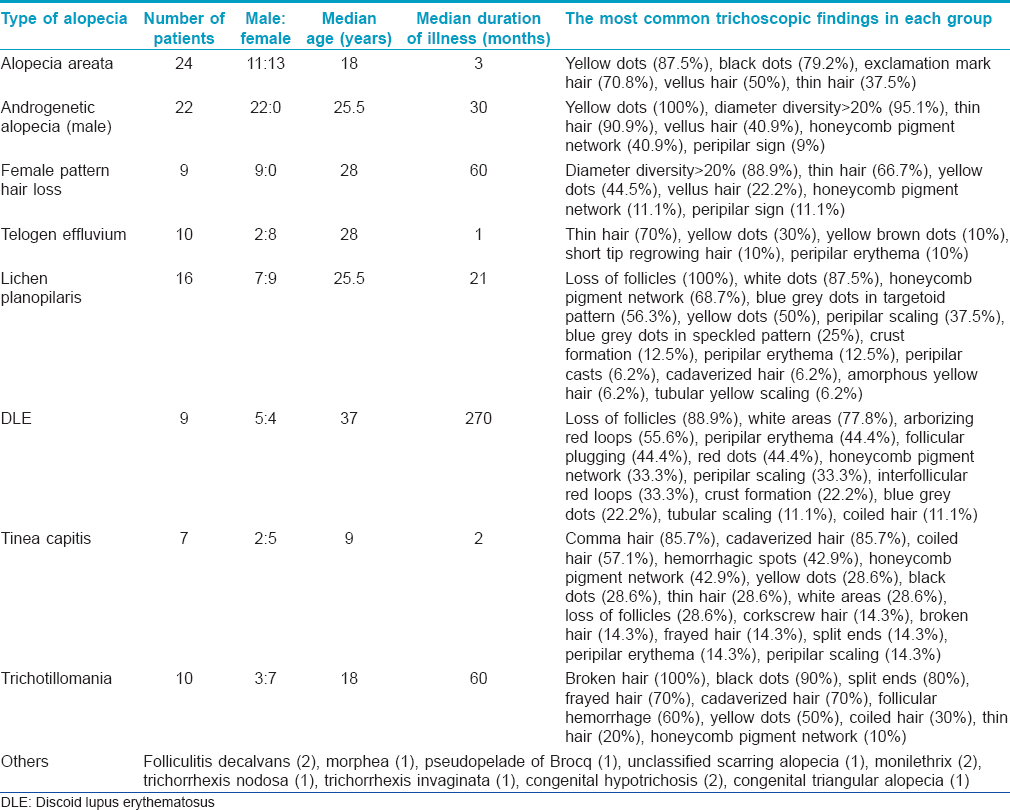 Table 1: Demographic and trichoscopic features in each type of alopecia

The most common trichoscopic findings were yellow dots (76 patients, 63.3%) and thin hair (49 patients, 40.8%). In patients with alopecia areata, the most frequent findings were yellow dots (87.5%), black dots (79%) and exclamation mark hair (70.9%) [Figure - 1]. The mean diameter diversity was 57.7% (SD 23.2) in androgenetic alopecia and 29.4 (SD 21.94) in female pattern hair loss. The most common finding in telogen effluvium (TE) was thin hair which was seen in 70% of patients. Short tip regrowing hair was seen in only 1 patient. The patient with chronic telogen effluvium showed yellow dots, some coiled hair and a honeycomb pigment network. Thin hair were not seen, in contrast to acute telogen effluvium. The most common trichoscopic findings in trichotillomania were broken hair of different lengths (100%) and black dots (90%) [Figure - 1]. Comma hair (85.7%) and cadaverized hair (85.7%) were the most common trichoscopic findings in tinea capitis [Figure - 2].

In the patient with monilethrix, beading of scalp and trunk hair was observed by trichoscopy. This patient also demonstrated the “regularly bended ribbon sign” and yellow dots. The patient with trichorrhexis nodosa showed acute angle turns on dermoscopy corresponding to the node. No specific trichoscopic features were seen in the patient with congenital hypotrichosis.

There was substantial overlap in the trichoscopic findings of the various alopecias. We attempted to isolate those features that were significantly associated with a particular diagnosis. Comparisons were made between scarring and non-scarring groups as a whole and also among specific diagnostic groups which were easily confused clinically. The statistically significant findings in each group are shown in [Table - 2]. 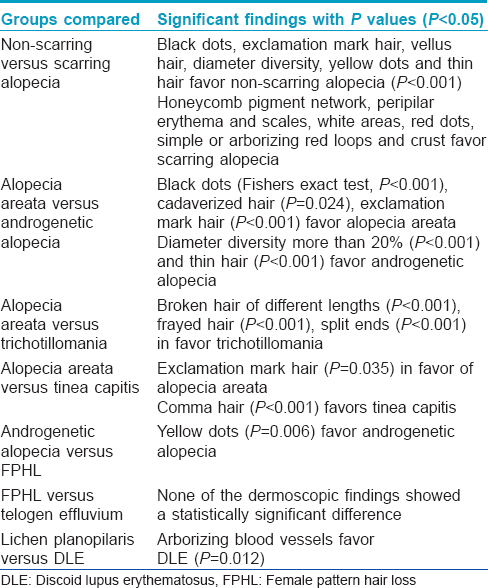 The clinical diagnosis was made with ease in 99 of the 120 cases as all the investigators agreed on a single diagnosis based on the clinical picture. In the remaining 21 cases in which the investigators were unable to reach a single diagnosis, trichoscopy helped to narrow down the differentials in 19 (90.5%) of these patients to reach the correct final diagnosis [Table - 3]. In the other 2, trichoscopy did not add to the diagnostic process and other investigations such as biopsy and hair microscopy were necessary for confirmation of diagnosis. 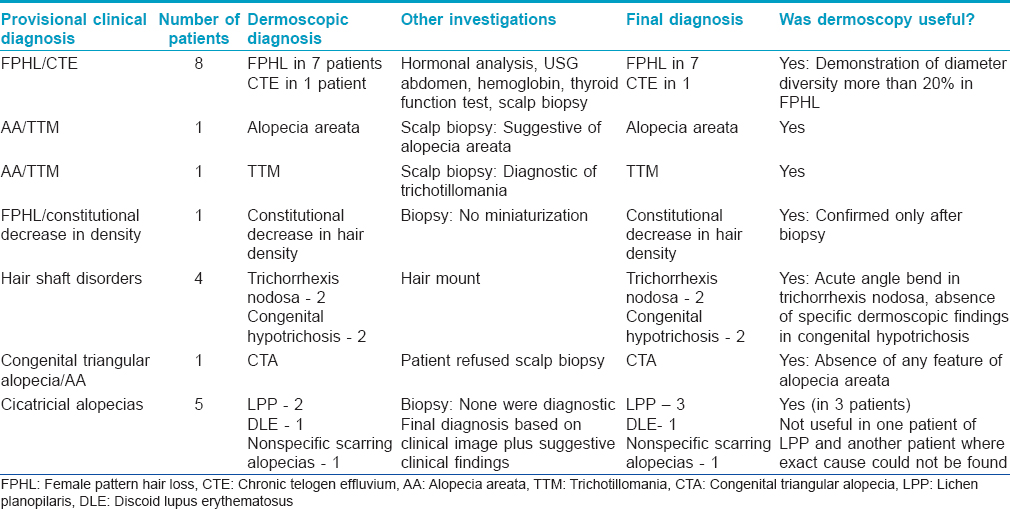 Our study focused on identifying the role of trichoscopy in alopecia. The findings in each group were in accordance with those already described in the literature [Table - 1].

In androgenetic alopecia, yellow dots, hair shaft diameter diversity and thin hair were the prominent features. Inui et al.[2] evaluated 50 Asian men with androgenetic alopecia and found hair shaft diameter variation of more than 20% in all the patients. Peripilar sign was positive in 66.6% compared to 9% in our study, possibly owing to the difficulty in identifying this feature in dark skin. Female pattern hair loss was diagnosed based on hair shaft diameter variation >20%. We found diameter diversity to be less prominent in female pattern hair loss patients compared to androgenetic alopecia. Although thin hair were the most prominent feature in telogen effluvium, there was a paucity of specific findings; these findings were similar to those of Kowalska-Oledzka et al.[3], who observed reduced terminal hair, increased vellus hair and empty follicles in the frontal area in female pattern hair loss and early regrowth of terminal hair and some vellus hair in telogen effluvium to be the prominent findings. Radowska et al. formulated major and minor trichoscopic criteria for diagnosis based on trichoscopic findings in 131 female patients.[4] We did not apply these criteria in our patients as we used a trichoscope with lower magnification as compared to the one used in their study.

All the trichoscopic features described in trichotillomania: black dots, hair broken off either close to the hair follicles or at different distances from them, fraying of hair, longitudinally split hair, coiled hair and stretching of the shaft, decreased hair density, empty follicular ostia and some yellow dots that may or may not contain black dots and areas with signs of scratching and bleeding were all observed in our patients.[5] The non-inflammatory type of tinea capitis demonstrated more signs as compared to the inflammatory type. Comma hair was the most common feature, as described in previous reports.[6],[7]

After a review of all articles published on trichoscopy of scalp disorders in 2012, Miteva et al. concluded that trichoscopy and videodermoscopy were very useful in differentiating non-scarring from scarring alopecia and alopecia areata from other patchy alopecias, as well as in diagnosing early androgenetic alopecia and tinea capitis.[13] In our study, trichoscopy helped to reach a conclusive diagnosis in 90% of the 21 patients in whom the diagnosis was not clear [Table - 3]. Trichoscopy is a valuable investigation in patients with alopecia and has a definite role in the diagnosis of difficult cases.

The limited number of patients in each group restricted our comparative analysis to only some types of alopecia. Some patients had been earlier treated elsewhere and treatment could have modified the trichoscopic findings. Biopsies were not performed in every patient as the diagnosis was evident clinically in many patients and an invasive procedure seemed unwarranted.

Trichoscopy helped to reach a conclusive diagnosis in 19 of the 21 patients in whom the diagnosis was not clear. We conclude that trichoscopy is a relevant investigation in patients with alopecia and has a definite role in the diagnosis of difficult cases.