Retrospective study on the characteristics and treatment of late-onset vitiligo

Background: Late-onset vitiligo, defined as being aged 50 years and above at the point of clinical onset, remains poorly characterized till now.
Aim: This study aims to describe the clinical characteristics and treatment response of patients with late-onset vitiligo.
Methods: We retrospectively reviewed the case records of all patients diagnosed with late-onset vitiligo, from January 1, 2010 to December 31, 2014. Information obtained included patient demographics, characteristics of vitiligo and treatment responses.
Results: Of the 3128 patients diagnosed with vitiligo over the 5-year period, 461 (14.7%) had late-onset disease. The study had more females (n = 260, 56.4%) than males, with an average onset age of 59.4 ± 7.4 years. Majority of patients were Chinese (n = 308, 66.8%) and 45 (9.8%) patients had an associated autoimmune disease. Focal vitiligo, defined as the localized presence of depigmented patches, was most common (n = 209, 45.3%). Treatment response was evaluated in 359 patients, of which 216 received monotherapy (topical creams: n = 210, 97.2%; phototherapy: n = 6, 2.8%) and 143 received both modalities. Fifty six (15.6%) patients received oral steroids. Patients who were treated with both topical creams and phototherapy yielded better clinical responses compared to those on monotherapy (P < 0.001) with 56.6% (n = 81) of them achieving good epidermal repigmentation, defined as >50% return of pigmentation compared to baseline (vs. n = 66, 30.6% in the monotherapy group). The choice of phototherapy (targeted, narrowband ultraviolet B or psoralen + ultraviolet A) did not significantly affect clinical response (P = 0.774).
Limitations: This study is limited by its retrospective nature, the nonstandardized documentation resulting in the inability to determine disease progression and associated metabolic comorbidities and also by the gradual loss to follow-up of patients.
Conclusion: Late-onset vitiligo is not uncommon and tends to be of the focal vitiligo subtype. Nonsegmented vitiligo is more prevalent than segmental vitiligo. Combination therapy with topical medications and phototherapy is superior to monotherapy.
Keywords: Late-onset vitiligo, repigmentation, phototherapy, vitiligo treatment

Vitiligo is a common acquired skin and mucosal disorder, characterized clinically by circumscribed white macules that enlarge and can potentially affect the entire skin. Its mechanism involves the progressive and selective destruction of melanocytes resulting in complete loss of pigmentation. While vitiligo is a relatively benign condition, it can pose dire psychosocial challenges to those affected by the disease.[1]

Vitiligo has an estimated prevalence of 0.5%–1% in most populations worldwide and usually occurs in childhood or young adulthood. Many studies record disease onset before the age of 20 years in around half of the patients.[1],[2],[3] The epidemiology of late-onset vitiligo is not well characterized. No standardized definition for late-onset vitiligo exists, but previous studies have defined this as being aged 30 years or 50 years and older.[4],[5],[6] As we wish to draw attention specifically to comorbidities of vitiligo in the older age group, we have chosen to define late-onset vitiligo as being aged 50 years and above at the time of clinical onset for the purpose of this study. To date, only two relatively small-scale studies have investigated the epidemiological and clinical features of late-onset vitiligo and both studies did not explore treatment efficacy in this subset of patients.[4],[5] This present study aims to describe the clinical characteristics and retrospectively determine treatment response of patients with late-onset vitiligo.

We carried out a retrospective study, approved by the Ethics Board (study reference E/15/696), at a tertiary care dermatological institution in Singapore. The profiles of all patients diagnosed with late-onset vitiligo, defined as being aged 50 years and above at the point of clinical onset, from January 1, 2010 to December 31, 2014 were reviewed. Electronic medical records were used to identify such cases. The diagnosis of vitiligo was made clinically by experienced dermatologists and for patients with uncertain diagnoses, investigations such as wood's lamp examination and fungal skin scrapings were done to rule out common differentials such as tinea versicolor and pityriasis alba.

Information obtained included patient demographics such as the age of disease onset, their race, gender, Fitzpatrick skin type and the presence of personal history of other autoimmune diseases. Family history of vitiligo and/or other autoimmune conditions, defined as the presence of disease in either first- or second-degree relatives, was also ascertained. Vitiligo was classified broadly into segmental, nonsegmental as well as mixed disease as guided by the Vitiligo Global Issues Consensus Conference.[7] Focal vitiligo, defined as the presence of depigmented patches located in a small area without a segmental distribution, was classified as a subtype of nonsegmental vitiligo in this study.[8] The presence of associated phenomenon such as koebnerization, leukotrichia and halo nevi as well as the treatment received and the maximal clinical response achieved subsequently were also determined. Epidermal repigmentation responses were categorized as “poor,” corresponding to ≥50% repigmentation or “good,” corresponding to >50% repigmentation compared to baseline.[9]

Descriptive statistics were used to summarize the demographics and clinical characteristics of the patients. Fisher's exact test was used to compare therapeutic efficacy between treatment groups due to the presence of small group counts (<5) and also because it allows for the provision of exact statistics as opposed to Chi-square test. A P< 0.05 was considered statistically significant. 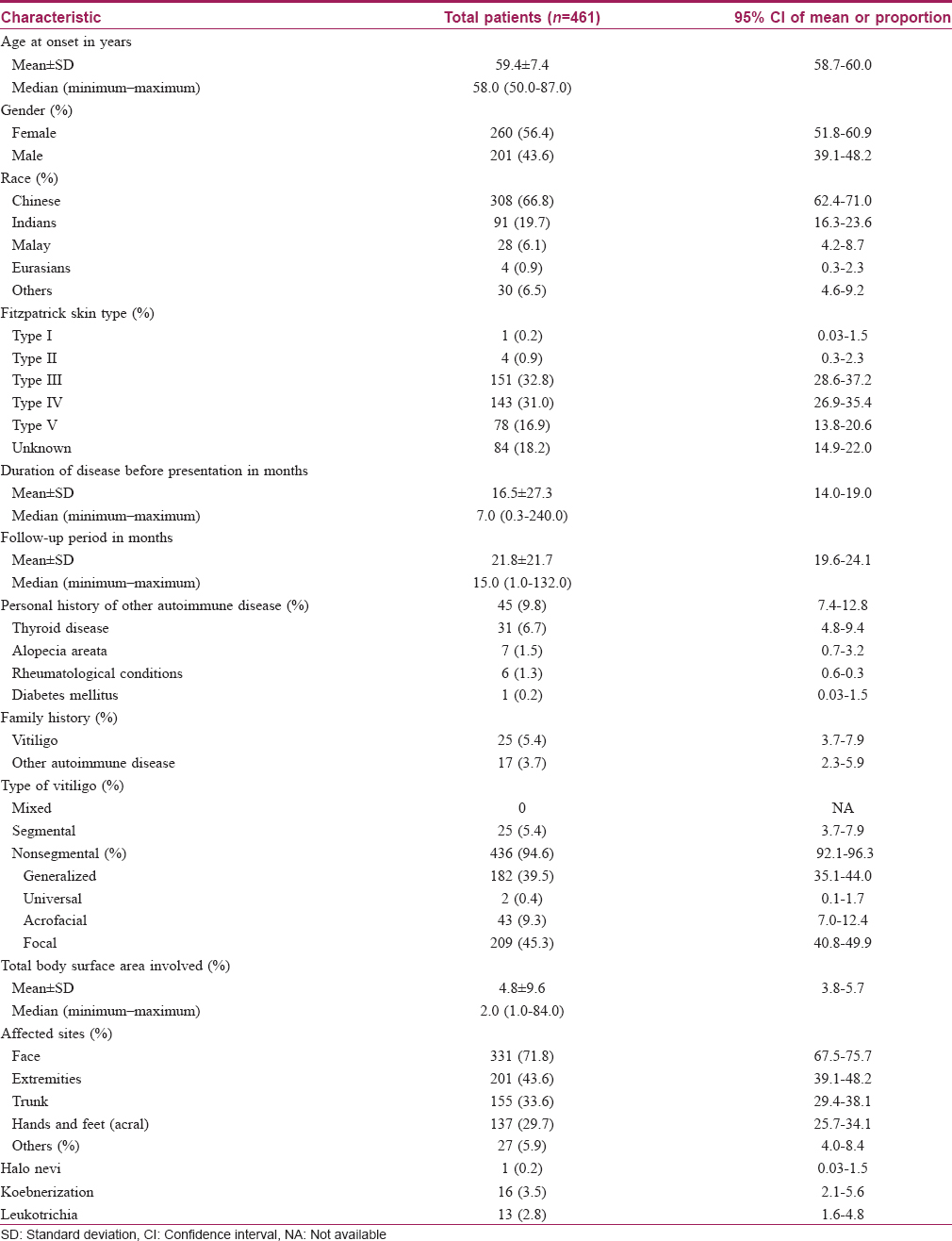 Treatment response, which is detailed in [Table - 2], was evaluated in 359 patients, after excluding those who defaulted after a single visit (n = 97), those who did not receive any treatment (n = 4) as well as a patient with universal vitiligo who underwent depigmentation therapy. The two main treatment modalities were topical creams and phototherapy and a minority of patients with stable vitiligo also underwent surgical grafting. Two hundred and sixteen patients received monotherapy, either with topical creams (n = 210, 97.2%) or phototherapy (n = 6, 2.8%). The remaining 143 patients received combination therapy, of which 139 (97.2%) patients were treated with both topical creams and phototherapy. Four (2.8%) patients also underwent surgical grafting. Of the 353 patients who received topical creams, 104 (29.5%) patients were prescribed topical steroids only, 22 (6.2%) patients received calcineurin inhibitors only and 227 (64.3%) patients were treated with both. Phototherapy options included targeted light treatment for localized disease, involving < 2% of the total body surface area, narrowband ultraviolet B for generalized disease and less commonly, topical psoralen + ultraviolet A for acral involvement.[10] Among the 149 patients who received phototherapy, 137 (91.9%) of them were treated with 1 modality (narrowband ultraviolet B: n = 53, 35.6%; psoralen + ultraviolet A: n = 1, 0.7%; targeted: n = 83, 55.7%). Only 12 (8.1%) patients were treated with more than one type of phototherapy. In addition, for patients who were deemed by the attending physician to have unstable or rapidly progressing disease (n = 56, 15.6%), short courses of oral steroids were given for an average of 2.3 months (range = 0.5–4 months). No other steroid-sparing agents were used. 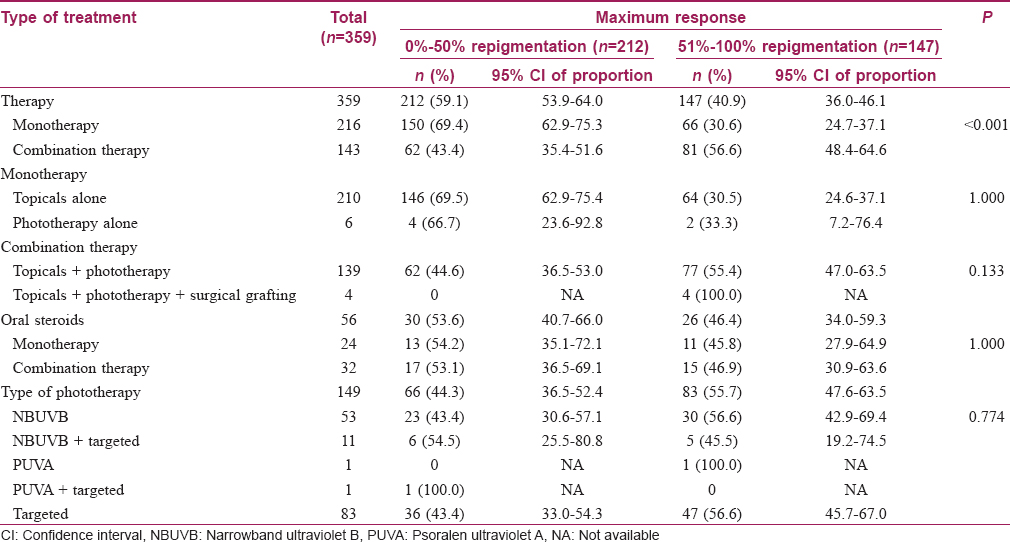 Overall, 147 (40.9%) of patients achieved good treatment response with the return of pigmentation to more than 50% of the affected sites. Among them, 26 (17.7%) patients received short courses of oral steroids. Combination therapy with topical creams and phototherapy with or without the addition of surgical grafting, yielded better clinical response with 56.6% (n = 81) of patients achieving good epidermal repigmentation. In comparison, only 30.6% (n = 66) of patients receiving monotherapy obtained good epidermal repigmentation [Table - 2], P < 0.001]. Among the patients receiving combination therapy, 32 (22.4%) patients received short courses of oral steroids as compared to 24 (11.1%) patients in the monotherapy group. However, the type of phototherapy (targeted, narrowband ultraviolet B or psoralen + ultraviolet A) that the patient underwent did not significantly affect clinical response [Table - 2], P = 0.774]. All 4 patients who underwent surgical grafting had excellent results with 3 (75.0%) patients achieving more than 95% repigmentation on the grafted sites.

Due to aging populations worldwide, greater importance is being placed on the understanding and management of diseases that afflict the elderly. At present, there is scarce data on late-onset vitiligo and hence, we decided to embark on this study. [Table - 3] summarizes the findings in the present study compared to previously published reports on late-onset vitiligo. Compared to earlier studies, there was a higher proportion of patients at our center who were diagnosed with late-onset disease.[4],[5] This may be a reflection of Singapore's aging population, where rising life expectancies mirror the falling birth rates.[11] According to the 2015 Singapore Population Census, Chinese (74.3%) make up the majority of our multiracial population, followed by the Malays (13.3%) and the Indians (9.1%).[11] Interestingly, there was a significantly higher proportion of Indians with late-onset vitiligo compared to the racial distribution in Singapore. The result is consistent with previous studies reporting a higher prevalence of vitiligo in India which may be due to the apparent color contrast in individuals of darker skin type, causing them to seek medical treatment early.[12],[13] Of significance too is the lower prevalence of late-onset vitiligo in Malays compared to their racial distribution. This has been demonstrated in previous vitiligo studies done in multiethnic populations which may indicate a genetic protection against vitiligo in this subgroup.[14],[15] 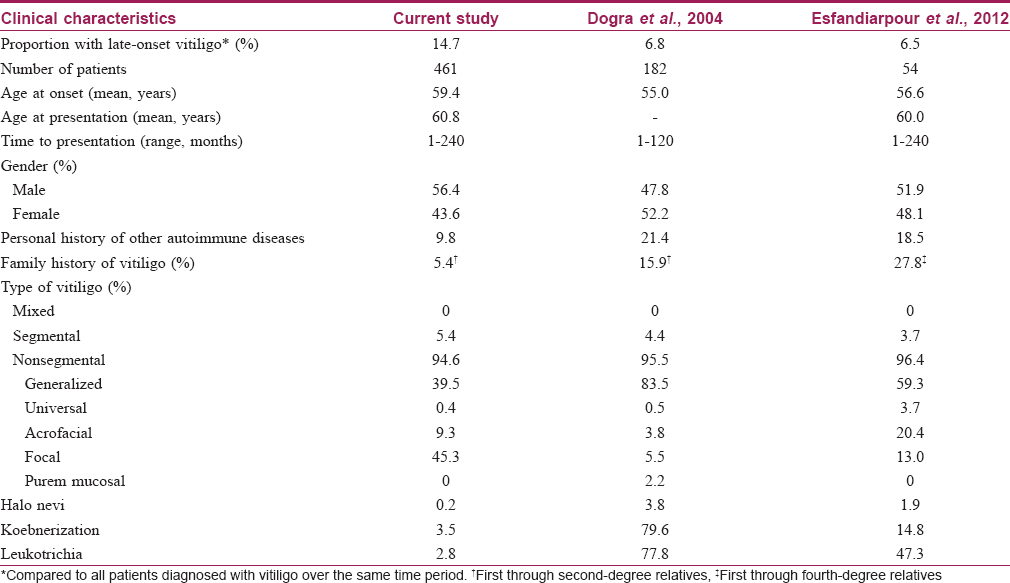 Table 3: Comparison of features in the current study to previous studies on late-onset vitiligo

Interestingly, 45.3% (n = 209) of our elderly patients presented with focal vitiligo. This differs from the two studies on late-onset vitiligo, in which generalized vitiligo vulgaris was more prevalent than focal vitiligo.[4],[5] In this study, we determined the clinical type of vitiligo based on the diagnosis at first presentation to our institution. Hence, some of the patients diagnosed with focal vitiligo could have evolved into generalized vitiligo vulgaris subsequently but were not captured in our data, thereby resulting in skewing of the data with a smaller-than-expected percentage of patients having vitiligo vulgaris. In addition, as focal vitiligo is known to respond to monotherapy if treated at early stage, the observation of better outcome after combination therapy in this study hints that patients with focal vitiligo may have progressed to generalized vitiligo vulgaris subsequently. Segmental vitiligo was uncommon in our study which concurs with the existing literature.[5] Segmental vitiligo generally occurs at a younger age with 41.3% presenting before 10 years of age and forms a significantly large subgroup of childhood vitiligo.[16] Among the patients with late-onset vitiligo locally, 9.8% (n = 45) had a personal history of other autoimmune conditions and 5.4% (n = 25) had a family history of vitiligo which are both lower than the figures reported in two late-onset vitiligo studies.[4],[5] The difference may be attributable to genetic heterogeneity in the different populations studied. While type I diabetes mellitus was previously reported as the most commonly associated autoimmune condition in late-onset vitiligo, thyroid disease and alopecia areata were more prevalent in our study population and only one patient had a history of type I diabetes.[4],[5] Interestingly, among the eight patients who were diagnosed with thyroid disorders only upon diagnosis of vitiligo, majority (n = 6, 75.0%) had good repigmentation following monotherapy with topical treatment only. This suggests the importance of screening for associated autoimmune diseases and its aggressive treatment upon diagnosis of late-onset vitiligo.

The major limitation of this study is its retrospective nature. A significant number of patients (n = 97, 27.0%) were also lost to follow-up. Due to the nonstandardized documentation by the attending doctors, information of disease progression could not be confirmed in some patients. Hence, we were unable to determine the number of patients with focal vitiligo who eventually evolved into generalized vitiligo vulgaris. Metabolic comorbidities commonly afflict the geriatric population, but because the presence of associated medical problems was not consistently documented, we were unable to study the association between metabolic disorders and late-onset vitiligo. In addition, the use of short courses of oral steroids in some patients could have affected the analysis of treatment response.

We thank Miss. Virlynn Tan for assistance with statistical analysis.