Background: In spite of the availability of multiple treatment options, viral warts are known for their persistence and recurrence, causing frustration to patients and treating physicians. Aims: To study the effectiveness and safety of autoinoculation as a treatment modality in cutaneous warts. Methods: A double-blind, placebo-controlled study was carried out. In the treatment group, full-thickness warty tissue was excised, minced and implanted in a small dermal pocket. In the control group, warty tissue was only excised and not implanted, though a dermal pocket was made. Patients were evaluated every four weeks with lesion counts. The procedure was repeated at 4 and 8 weeks. Response was assessed at each visit and at 12 weeks. Results: Forty-eight patients with cutaneous warts (male: female = 32:16) were randomized into autoinoculation and control groups. The number of warts at baseline was comparable in both groups (P = 0.293). Reduction in the number of warts was significantly more in the autoinoculation group (8.50 ± 13.88) than in the control group (10.04 ± 5.80) from 8 weeks onwards (P = 0.010). Complete resolution occurred only in the autoinoculation group, in 62.5% of cases. Adverse effects were seen in 11 patients, including infection of the donor site (5 cases), keloid formation (3) and hypopigmentation (3). Conclusion: Autoinoculation may be an effective therapeutic modality for cutaneous warts and two sessions may be required for optimum results.
Keywords: Autoinoculation, cutaneous wart, placebo-controlled, randomised controlled trial

Viral warts are papillomas caused by the human papilloma virus (HPV) and can grow anywhere on the body, commonly on the hands and feet. Although some warts regress spontaneously, [1] most require treatment. Management is difficult, primarily due to recalcitrance to standard therapy and high recurrence rates. The potential for spread to contiguous sites and to contacts along with disfigurement and psychosocial effects result in considerable morbidity and a constant demand for a cure. Currently available options including cryosurgery, laser, electrosurgery, curettage, and topical keratolytics are generally painful and limited by recurrences. [2] The need for immunotherapy that can target remote warts (i.e. those which are not intervened with directly) is felt by all practicing dermatologists, especially in cases of multiple warts and warts at inaccessible sites. Diphenylcyclopropenone (DCP), squaric acid dibutyl ester (SADBE), imiquimod, tuberculin jelly, Candida antigen and autologous vaccines have all been tried for immunotherapy but none has been consistently effective. [2] Further, DCP and SABDE can cause allergic contact dermatitis, urticarial lesions, and pigmentary disturbances, while autologous vaccines may have oncogenic potential. [3] On the other hand, autoinoculation of warts seems to be an inexpensive and effective treatment modality. We therefore did a study to explore the potential of autoinoculation as an immunotherapeutic modality to target remote warts.

The study was designed as a double-blind, randomized (1:1), placebo-controlled trial and carried out between September 2012 and February 2013 at a tertiary care hospital in eastern India. Clearance from the institutional ethics committee was obtained before starting the study. All consecutive treatment-naive patients of either sex with more than five clinically diagnosed cutaneous warts attending the dermatology out-patient department were included. Our exclusion criteria were: pregnancy and lactation, immunosuppression due to drugs or disease, advanced disease of vital organs, inability to come for monthly follow-ups, alcohol or other substance abuse, and those with mucosal warts. All patients included were tested for HIV infection and found negative. Equal randomization was done by a balanced unstratified randomization technique using WINPEPI software, ETCETERA version 2.32. Concealment of randomization was done by opaque sequentially numbered and sealed envelopes.

At the screening visit, patients were enrolled based on inclusion and exclusion criteria. Written informed consent was obtained from the patient (or the legally authorized representative, in the case of 5 illiterate patients). Only hitherto untreated patients were included.

Patients were randomized equally into two groups (autoinoculation and control groups) by a computer-generated random number table. A thorough clinical examination was done in all patients and the number of warts was recorded in a standard form. A routine hemogram, fasting blood glucose, serum urea, creatinine and liver function tests were done. The first session of autoinoculation was then carried out. Patients who were not immunized against tetanus were given intramuscular tetanus toxoid (0.5 ml) at the baseline visit.

Adverse events reported by patients and those noted by the clinician were recorded. Laboratory tests done at the screening visit were repeated at the third follow-up visit.

Autoinoculation was performed thrice in each patient in the treatment group: at baseline, then at first and second follow-up visits. The procedure was performed under strict aseptic precautions in the dermatology operation theatre. The technique followed was that of Shivakumar et al., with some modifications. [4] A wart of substantial volume was chosen as the donor and anesthetized by 2% lignocaine infiltration. It was then shaved using a number 15 scalpel blade [Figure - 1]. Hemostasis was achieved with a radio-frequency monopolar probe in coagulation mode. The tissue thus obtained was placed in a petri dish and minced into tiny bits. Using a 20 gauge needle, a dermal pocket extending up to the subcutis was created over the volar aspect of the left forearm, 5 cm below the antecubital crease with prior infiltration anesthesia. The minced bits of the donor wart were introduced into this pocket using the tip of the same needle [Figure - 2]. Both donor and recipient sites were dressed with sterile medicated gauze and adhesive plaster (Micropore® ). Systemic and topical antibiotics (oral amoxicillin + clavulanic acid and topical mupirocin) were prescribed for 5 days. Patients were advised not to wet or remove the plaster for 5 days after the procedure.

At each visit a different wart was chosen to obtain tissue for inoculation and a new dermal pocket was made because the old pocket healed in 5-7 days. If no lesions were present after the first treatment, the patient was followed-up without further inoculation.

Pre- and post-treatment laboratory values were compared in patients for whom both sets of data were available (41 patients). For other safety analysis, all subjects were considered.

Patients were unaware of which group they were allocated to, and wart tissue was taken from patients in both the groups. While autoinoculation was done in the treatment group, a sham inoculation procedure was carried out in the control group, wherein only a dermal pocket was created but no wart tissue was inoculated. The procedure was carried out thrice in each control patient. Dressings of the donor and recipient sites as well as antibiotics given were similar in both the groups. The dermatologist who noted the number of warts and adverse events at each visit was also unaware of the treatment received.

The target sample size was 48, with 24 evaluable subjects in each group. This was calculated assuming 30% spontaneous reduction of warts [1] and 70% resolution in the autoinoculation group [4] with 80% power and a 5% probability of Type 1 error, and 10% possible dropouts considering a superiority trial. Continuous variables were compared between groups by the independent samples t-test and within groups by the paired t-test. Mann Whitney U test and Wilcoxon′s matched pairs signed rank test were employed for comparison of unpaired and paired nonparametric data. Friedman′s analysis of variance (ANOVA) was carried out with non-parametric data for within-group repeated measures comparisons, followed by a post-hoc Dunn′s test. Categorical data were compared between groups by a Chi-squared test or Fisher′s exact test, as appropriate. Analysis of co-variance (ANCOVA) was done where the baseline was a co-variate. MedCalc version 11.6 [Mariakerke, Belgium: MedCalc Software, 2011 and GraphPad Prism version 5 [San Diego, California: GraphPad Software Inc., 20057 software were used for statistical analysis.

Effectiveness analysis was done on modified intention-to-treat basis with subjects reporting for at least one post-baseline follow-up visit. Missing values were dealt with by the last observation carried forward strategy. Pre- and post-treatment laboratory values were compared in patients for whom both sets of data were available (41 patients). For other safety analysis, all subjects were considered.

The flow of study participants was as shown in [Figure - 3]. Forty-eight patients were randomized equally into two groups. None was lost to follow-up and all patients returned for follow-ups as advised, on time.

Males outnumbered females and patients were mostly in their mid-twenties. Patients in the autoinoculation group were younger on average than those in the control group (P = 0.028). There were no pediatric patients. The groups were comparable with respect to the duration of illness, size of lesions, sex distribution, residence (rural or urban), and income (above or below poverty line) [Table - 1]. 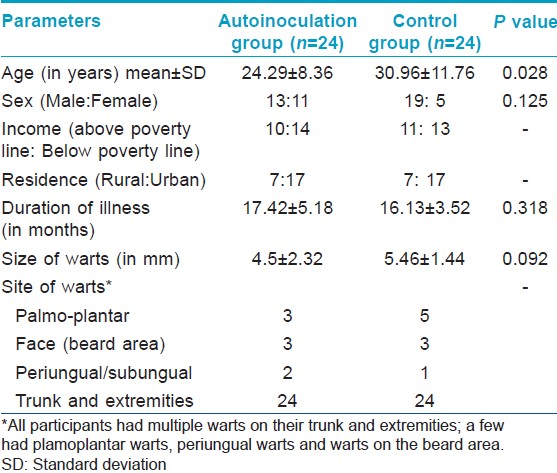 Table 2: Comparison of the number of warts in the two treatment groups

Subgroup analysis within the autoinoculation group showed no statistically significant difference with respect to age or sex between complete and partial responders [Table - 3]. However, it was seen that the patients whose warts cleared completely had had them for a longer duration than those with partial improvement. Importantly, the number of warts at baseline did not affect the degree of reduction in warts (P = 0.144) [Table - 3]. 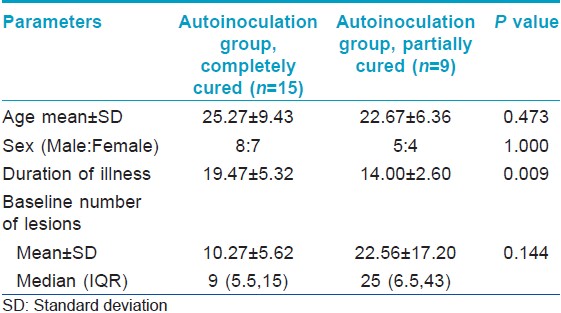 Table 3: Subgroup analysis of complete and partial responders within the autoinoculation group

Adverse events were observed in eleven patients, with infection of the donor site in 5 patients in the control group, while 3 patients each in the autoinoculation group developed keloids and hypopigmentation. Laboratory parameters were within normal limits and comparable between the groups.

Evidence suggests that the patient′s cell-mediated immunity plays an important role in the treatment of warts. [5] Studies exploring the potential of immunotherapy for warts are mostly open-labeled or non-randomized, hence their interpretation is difficult. A systematic review on the treatment of warts could not recommend local immunotherapy for the same reason. [6] Another recent review has suggested intralesional antigen immunotherapy (Candida, mumps skin test antigen, MMR vaccine) as the first line for treatment of numerous (>5) warts, large (>1 cm) warts, warts associated with distant lesions, warts at difficult sites (e.g. periungual warts) and as the second line of management in recalcitrant warts that have failed to clear despite destructive therapies. [5]

Autoinoculation may work by activating a delayed hypersensitivity response to the wart tissue antigens, aiding clearance of both local and distant warts. This therapy was shown to be associated with the production of Th1 cytokines. [7] Th1 cytokines TNF-α and IL-1 downregulate the transcription of HPV genes whereas INF-γ and IL-2 stimulate cytotoxic T cells and natural killer cells to eradicate HPV-infected cells. [5] Intralesional antigen therapy has been shown to alter the cytokine profile to a predominant Th1 type, decreasing the Th2 response and inducing strong cell-mediated immunity. [5]

We could not find any reported randomized controlled trials of autoinoculation therapy in the current literature. Three open-labelled studies reported response to autoinoculation therapy in 66-74% of patients. [4],[8],[9] It has been shown that hypnotherapy [10] can induce a response in warts and the psychological effects of undergoing a procedure may be therefore be important. To exclude this possibility, we performed a sham inoculation procedure as placebo in the control group. Resolution was achieved in 62.5% of patients in the treatment group and those cured did not show any recurrence within three months of the study period. Local adverse events were mild and did not necessitate withdrawal from therapy. Systemic symptoms (fever, myalgia, arthralgia) or local pain, erythema and itching, seen with other forms of immunotherapy (Candida, mumps, trichophytin antigens) [3] were not observed in our patients.

Our study indicates that autoinoculation has potential in patients with multiple warts where removing all lesions is a difficult task. Longstanding warts as well as peri- and subungual warts, which are difficult to manage otherwise, also responded well to autoinoculation in our study [Figure - 6]a and b.

A limitation of our study was that we could not determine the HPV type to account for type-specific differences in therapeutic outcomes. We also could not check the levels of relevant Th1 cytokines (TNF-α, IFN-γ, IL-2, IL-12) to ascertain their role. The follow-up period could also not be extended beyond 12 weeks.

Our study indicates that autoinoculation therapy holds promise in the management of viral warts. Being an easy day-care procedure, it is also a cost-effective option.