Second to fourth digit ratio in female patients with acne vulgaris: Could it be a predictor of androgen receptor status?

Acne vulgaris is a chronic multifactorial inflammatory disease of the pilosebaceous unit.[1] It is characterized by androgen-induced excess sebum production, follicular hyperkeratinization, inflammation and altered adaptive immune response.[2] Presence of high androgen levels is important for the development of acne lesions. However, majority of acne patients exhibit normal levels of circulating androgens, suggesting that the impact of androgens on development of acne lesions might be related to end-organ sensitivity.[3],[4]

Therefore, we aimed to investigate the relationship between second to fourth digit ratio and androgen receptor status in acne lesions in female patients and to assess its association with clinical aspects (age of onset, duration and/or severity) of the disease.

This was a cross-sectional study of female patients (n = 352, ≥16 years old) with different degrees of acne vulgaris severity, controlled to age-matched acne-free healthy volunteer females (n = 168) from biorepository banking services who agreed supporting our research. Cases were recruited from a tertiary health care provider in dermatology clinic at Menoufia University Hospitals, Shebin El-Kom, El Menoufia, Egypt, during the period between January 2015 to October 2016, following institutional approval of the study by the Ethics Committee, Faculty of Medicine, Menoufia University, Egypt in accordance with the Helsinki declaration, 1975 (revised in 2000). An informed consent was signed before enrolling into this study. We excluded subjects with a history of injury and/or illness that could have lead to deformities of fingers, as well as those with a history of drugs that could induce acne. Double-blind randomization was followed up to the end of the study. Study coordinator disclosed the patient identification, to link lab results, and for classification of patients groups for statistical analysis and results tabulation.

Each participant in this study was subjected to a thorough medical history and physical examination to apply the inclusion/exclusion criteria. Dermatological examination was performed using the International Consensus Conference on acne classification system, to confirm acne diagnosis and grade its severity.[22] Mild acne presented with comedones and papules. Moderate acne was distinguished by several papules, pustules and some nodules. Severe acne was characterized by numerous or extensive papules–pustules or both, along with many nodules. Very severe forms of acne included acne conglobata and acne fulminans.

For all participants in the study, the lengths of second and fourth fingers were measured using a digital caliper with a resolution of 0.01 mm. Finger length was measured on the palmar side of the hand from the basal meta-carpo-phalangeal crease or, if more than one, from the most proximal crease to the fingertip in both right and left hands. Finger lengths were evaluated before assessment of acne to eliminate inter-observer measurement differences. The second to fourth digit ratio was obtained by dividing the length of second finger by fourth finger's length, for both right and left hand, and the average of both hands was calculated to represent the total second to fourth digit ratio. So, for each participant right, left and total second to fourth digit ratios were calculated, as described in a previous studyr.[13]

From the back of all participants, 2 mm punch skin biopsies were taken. From each biopsy, multiple 4 μm thickness sections were cut. Slides were subjected to subsequent steps of deparaffinization and rehydration. Antigen retrieval was performed by boiling in citrate buffer saline (pH 6) for 20 min, followed by cooling at room temperature. Endogenous peroxidase activity was blocked by incubation with 6% H2O2 in methanol. The primary antibody [mouse monoclonal antibody against androgen receptor (Clone AR441) at 1:50 dilution] (LabvVsion ®, Neomarker, CA, USA) was incubated overnight at room temperature. Immunoreactivity for androgen receptor was visualized using Envision system (Dako ®, Copenhagen, Denmark) with DAB chromogenic substrate and Mayer's hematoxylin as a counter stain. Negative control was prepared by substituting the primary antibody with cross-matched isotopes. Normal prostate was used as a positive tissue control. Specimen was considered androgen receptor positive if more than 1% of cells showed nuclear immunoreactivity. Evaluation of intensity and percentage of immunoreactivity was done, after which H score formula (H score = mild intensity (1) × percentage + moderate intensity (2) × percentage + strong intensity (3) × percentage) was calculated and reported for every specimen.

Data of this study was collected and processed on IBM-PC compatible computer using SPSS software version 20.0 (SPSS Inc., Chicago, USA). Student's t-test and Mann–Whitney U-test were used to compare quantitative data according to its distribution. Chi-square test was used for qualitative data and Spearman correlation to assess correlations. P < 0.05 was considered as the cut-off value for significance.

The demographic and clinical data of studied subjects

Clinical data of the acne patient group are presented in [Table - 1]. 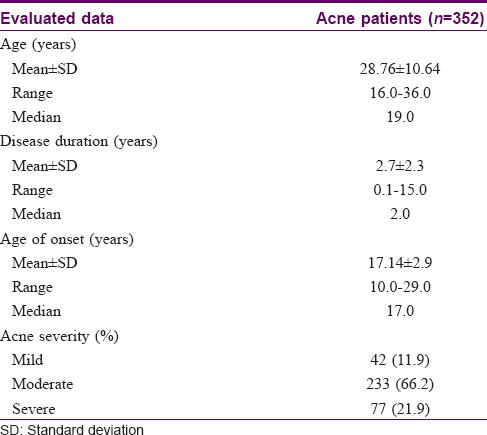 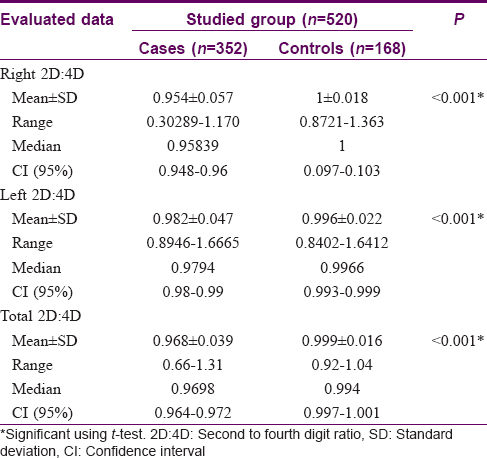 Table 3: Correlation between acne duration and 2D: 4D ratios in the studied patients

Table 4: Correlation between acne duration and 2D: 4D ratios in the studied patients

In controls, androgen receptor immunoreactivity was seen in the cytoplasm of 80% of the examined cases which was considered as artefactual (i.e. negative).[23]

In agreement with the results of Bilgiç et al., in our study, female patients with acne demonstrated significant decrease in right, left and total second to fourth digit ratios when compared to their matched peers.[21] Zouboulis et al. detected an increased sebum secretion in adult female rats that were exposed to androgens in the first week of their fetal life.[24] This suggests that female fetuses exposed to higher androgens are at higher risk of developing acne., Second to fourth digit ratio is different in males and females and thus could be used as a predictor of development of acne vulgaris in females.

On the contrary, Unal et al. reported an insignificant decrease in second to fourth digit ratios (right, left and total) in female acne patients compared with their matched controls.[25] However their sample size was small (91 patients).

Surprisingly, we found a positive correlation between acne severity with both left and total second to fourth digit ratios in our cases i.e. feminine second to fourth digit ratio is associated with severe acne in females, indicating that acne vulgaris is a multifactorial disease and reasons other than androgens may account for acne severity. Absence of significant correlation between acne severity and the clinical or laboratory androgenicity indicators was also reported in another study.[26]

However, in the right hand, second to fourth digit ratio showed a negative correlation with acne severity (r = −0.065); although this correlation could not reach the level of significance (P = 0.223). This supports the result of an earlier study in which the authors reported that the right second to fourth digit ratio had stronger relationship with fetal testosterone than the left ratio, suggesting that the right hand is more sensitive to prenatal sex androgens than the left.[27]

Parallel to its observed role in predicting acne development in females, second to fourth digit ratio could also predict expression of androgen receptors in acne vulgaris skin, indicated by the demonstrated significant correlation between right and left second to fourth digit ratios and androgen receptor H score mean values in acne skin biopsies in our study.

Recently, Pakhiddey et al. reported that, in acne vulgaris patients, androgen receptor expression may be used to predict clinical response to acne treatment and may be used to plan the treatment of acne vulgaris.[23] Androgen receptor evaluation necessitates skin biopsy, which is an invasive procedure usually not accepted by acne patients. However, from the present study, we recommend evaluation of second to fourth digit ratio as a noninvasive simple tool, to give an idea about the cutaneous androgen receptor load in female acne patients, which could subsequently be taken as a base parameter in planning treatment.

In this study, the focus was only on female patients with acne vulgaris. Absence of male participants and lack of follow-up were the limitations of the current study. Further studies will be needed to examine masculine second to fourth digit ratio in both male and female acne patients and response to different treatment modalities on cutaneous androgen receptor expression.

Based on aforementioned findings, we confirmed the role of second to fourth digit ratio as a predictor for development of acne vulgaris, its severity, and disease duration in female patients. Additionally, it may be considered as an indirect measurement of androgen receptor status, and could be taken as a basal clinical parameter in planning treatment for acne.

The authors are grateful to Dr. Sally Mohsin, Department of Public Health and Community Medicine, Faculty of medicine-Menoufia University, Egypt, for helping in the statistical analysis of this study.