Serum and tissue angiotensin-converting enzyme in patients with alopecia areata

Alopecia areata is an immune-dependent disorder characterized by the interaction of T-lymphocytes with follicular antigens. It is the most common cause of immune-mediated nonscarring alopecia, with a female to male ratio of about 1:1.[1],[2]

Angiotensin-converting enzyme (ACE) is a membrane-bound zinc-dependent dipeptidase that catalyzes the conversion of angiotensin I to a physiologically active peptide named angiotensin II. Recent studies have shown the presence of a local renin–angiotensin system in some organs such as the brain, kidneys, epithelial cells, heart and skin, which works separately from its circulating counterpart. In this local renin–angiotensin system system, ACE has a role in autoimmunity and inflammation.[3],[4]

This case–control study was conducted on patients with alopecia areata and healthy controls in Razi Hospital, Tehran University of Medical Sciences, Tehran, Iran, from February to September 2016. The study proposal was approved by the Ethical Committee of Tehran University of Medical Sciences. Informed consent was obtained from all study subjects.

Patients with clinically diagnosed alopecia areata of the scalp and/or beard area who were 16 years or older were included. Cases with the following were excluded: sarcoidosis, hypertension, tuberculosis, diabetes mellitus, liver disease, thyroid disease and other autoimmune diseases, alcohol consumption, smoking, and the use of systemic or topical medications such as immunosuppressives, ACE inhibitors and diphencyprone within 2 months prior to the study. The control group consisted of candidates for excision of scalp pilar cysts, selected because their normal skin could be obtained without additional surgery. Normal skin over the cyst was used as control for the evaluation of tissue ACE activity.

Demographic and clinical data of the patients were collected. Hair loss activity was defined as “losing” hair, “stable” disease, or “growing” hair, on the basis of the history and clinical examination. The amount of hair loss was estimated according to SALT score (S0: no hair loss, S1:< 25%, S2: 26-50%, S3: 51- 75%, S4:76- 99%, S5:100%; and presence of body hair loss B0: no involvement, B1: some body hair loss, B2: 100% body involvement; and nail involvement N0: no nail involvement, N1: some nail involvement, N1a: 20-nail dystrophy or trachyonychia). Then, 5 cc of serum was obtained and a biopsy performed in patients (from an active lesion with progressive hair loss, if there were any, or otherwise, from an old lesion), and controls. Serum ACE activity was assessed using the ACE Kit (Audit Diagnostics Company, Ireland) via the Hitachi 717 Chemistry Analyzer. Serum ACE level was determined by the furylacrylolyl phenylalanyl method.

Tissue sections were stained with hematoxylin and eosin (H and E) for histologic diagnosis. Immunohistochemistry was carried out on all samples. We used anti-angiotensin-converting enzyme1 antibody (EPR2757) (ab75762) at a dilution of 1/100 on skin specimens (Abcam 's RabMAb® technology). Intensity of the cytoplasmic reaction for ACE in the immunopositive cells located in the epidermis or follicular epithelium was documented as negative (0), weakly positive (1+) or strongly positive (2+). For endothelium, it was reported as negative or positive. Distribution of immunopositive cells in the epidermis and follicular epithelium was classified into basal layer keratinocyte staining and full-thickness staining (basal to upward layers of the epidermis).

Statistical analysis was carried out using Statistical Package for the Social Sciences, version 22. Quantitative data are presented as mean ± SD or mean rank, and categorical variables are shown as numbers and percentages. We used Chi-square and Fisher's exact tests to assess the relationship between categorical variables and to compare these variables between case and control groups. Independent samples t-test, analysis of variances, or Mann–Whitney U test were used to compare continuous variables between groups. Two sided P values ≤0.05 were considered significant.

Twenty-five patients with alopecia areata (60% male, mean age 32.08 ± 9.9 years) were included in the study. The mean age at disease onset was 28.3 ± 3.4 years. Twenty-four healthy persons with pilar cysts were included as controls (50% male, mean age 37.4 ± 8.8 years). The diagnosis in all cases of alopecia areata was confirmed by histology. Demographic and clinical characteristics of patients and correlations of clinical characteristics with serum ACE activity are summarized in [Table - 1]. There were no significant differences in age, sex, personal history of atopic diathesis, and family history of alopecia areata between patients and controls. 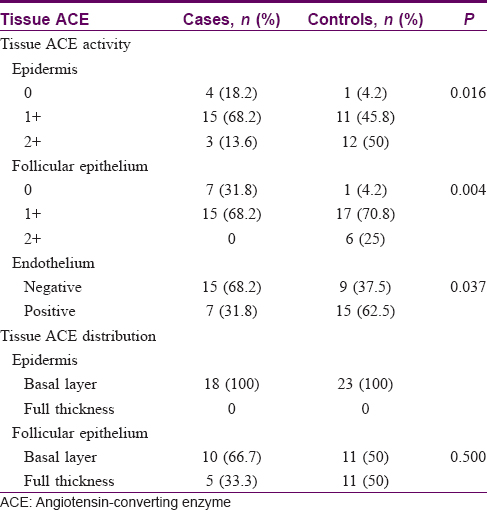 In the case group, serum ACE activity was significantly higher in patients with more severe disease (P = 0.03), nonpatchy alopecia areata (universalis, ophiasis, patchy and ophiasis, diffuse) (P = 0.029), and with nail involvement (P = 0.027). Serum ACE did not vary significantly with age, sex, and other clinical characteristics (including disease duration, duration of current episode of hair loss, and hair loss activity), or histopathologic findings [Table - 1]. Tissue ACE also had no significant correlation with clinical characteristics (P > 0.05). Moreover, serum ACE activity had no relationship with the severity of tissue ACE activity in different parts of the tissue (epidermis, endothelium, and follicular epithelium) (P > 0.05).

ACE converts angiotensin I to angiotensin II, which results in increased vasoconstrictor activity of angiotensin.[3],[4] Recent studies have demonstrated local ACE activity in inflammatory diseases such as rheumatoid arthritis, pemphigus vulgaris, lupus erythematous and multiple sclerosis, and point to local involvement of the renin–angiotensin system and ACE activity in their pathogenesis, independent of its major role in vasoconstriction, blood pressure, and electrolyte balance.[5],[6],[7],[8]

In our study, although serum ACE was lower in alopecia areata patients, it had significant relationship with disease severity, which may show the role of ACE in the pathogenesis of alopecia areata. In a study by Namazi et al., serum ACE activity was higher in the patient group compared to the controls but the difference was not statistically significant. Moreover, there was no correlation between ACE activity and disease severity and duration in their patients.[3]

Huskić et al. showed that tissue ACE activity in the lesional skin of psoriatic patients was significantly increased in comparison to the uninvolved skin of these patients and the skin of healthy individuals. After topical and/or systemic therapy, there were no significant differences in tissue ACE activity between treated skin and healthy skin. Nevertheless, tissue ACE activity was not higher in patients with lichen planus and seborrheic dermatitis. Therefore, they concluded that measurement of tissue ACE activity could be used in the differential diagnosis of indistinct clinical forms of psoriasis.[4] Robati et al. found no significant difference in mean serum ACE between patients with pemphigus vulgaris and healthy controls, but mean ACE level was significantly lower in male patients compared to male controls. Therefore, they suggested that ACE might have some association with pemphigus vulgaris, especially in male patients.[6]

Cobankara et al.[9] reported increased ACE in the synovial fluid of rheumatoid arthritis patients and suggested that local production of ACE leads to joint destruction in rheumatoid arthritis. In a report from Egypt by Abbas et al., compared with controls, the mean serum ACE levels were significantly higher in patients of lupus nephritis and systemic lupus erythematosus with vasculopathy. They suggested that serum ACE activity may be related to disease activity.[7]

Unlike the findings in some other inflammatory diseases, the mean tissue level of ACE was significantly lower in alopecia areata than in normal controls in our study. We did not find previous reports of any condition where tissue ACE was lower than normal. We suggest that angiotensin I may have a role in the inflammation of alopecia areata, causing ACE consumption and lower tissue levels of this enzyme.

This study has some limitations. The sample was too small to draw definite conclusions. The study was conducted on patients with mostly mild and moderate alopecia areata; only a limited number of patients with severe alopecia areata were included. We used the normal skin adjacent to pilar cysts in otherwise normal individuals as controls, and we could not find any relationship between ACE and pilar cysts in the literature.

We found that serum ACE was higher in more severe cases of alopecia areata, while the tissue level of ACE was significantly lower in alopecia areata than in controls. Further studies of tissue and serum ACE levels with larger samples and including more of the severe types of alopecia areata should be done to draw definite conclusions. Assessment of the role of the renin–angiotensin system in alopecia areata in animal models is also recommended for future studies, with evaluation of micro-RNA and protein expression and also the effect of ACE inhibitors on the immunomodulation in this system.

This study was supported by a research grant from Tehran University of Medical Sciences (registered code: 94-03-30-30024). We would like to thank Dr Teymourpour, for helping with revision of statistical analysis.

The authors certify that they have obtained all appropriate patient consent forms. In the form, patients have given their consent for their images and other clinical information to be reported in the journal. The patients understand that their names and initials will not be published and due efforts will be made to conceal identity, but that anonymity cannot be guaranteed.