Hailey-Hailey disease (HHD; MIM 169600), also known as familial benign chronic pemphigus, is a rare autosomal dominant dermatosis. The disease is characterized by recurrent blisters, crusted erosions, and warty papules occurring mainly in the sites of friction and flexures, particularly the groin [Figure - 1], neck, and axillary, perianal, and submammary regions. Histology reveals acantholysis of the epidermis, giving the appearance of a "dilapidated brick wall" [Figure - 1]. The ATP2C1 gene on 3q22.1 was identified as the defective gene of HHD. The gene encodes an Adenosine Triphosphate (ATP) powered calcium channel pump, [1],[2] also known as human secretory pathway Ca 2+ /Mn 2+ ATPase protein 1 (hSPCA1), localized in the Golgi apparatus. [3] In this paper, we performed mutation analysis of the ATP2C1 gene in four familial HHD patients and four sporadic HHD patients. The patients were diagnosed on clinical and histopathological findings [Figure - 1].

Seven mutations were identified in our eight HHD patients; six of these were novel [Table - 1] and [Figure - 1]. 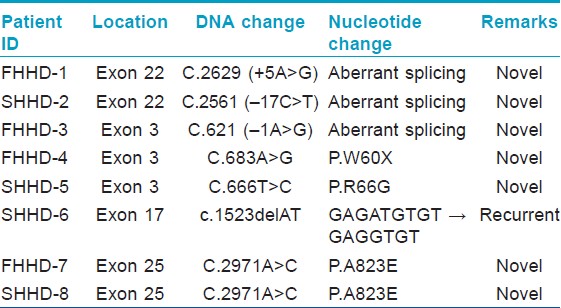 The ATP-powered calcium channel pump of the human keratinocyte localizes on the Golgi apparatus and competitively transports Ca 2+ and Mn 2+ into it. So, it has an irreplaceable role in controlling the Golgi Ca 2+ stores. To date, more than 110 mutations of ATP2C1 gene have been reported. [5] In this paper, we reported three splicing-site mutations (c.2629 + 5A > G, c.2561-17C > T, and C.621-1A >) in FHHD-1, SHHD-2, and FHHD-3, respectively and one missense mutations c.666T > C in SHHD-5. An APT2C1 gene with these mutations may encode abnormal gene products. Two mutations, c.683 A > G in FHHD-4 and c.1523delAT in SHHD-6, resulting in premature termination and frameshift may cause a significant and an absence in the level of hSPCA1.

In summary, we report six novel mutations of the ATP2C1 gene and one reported mutation of the ATP2C1 gene in eight Chinese patients, which will further expand the database of ATP2C1 mutations in HHD. We failed to find any relationship between genotype and phenotype, just like the previous reports.