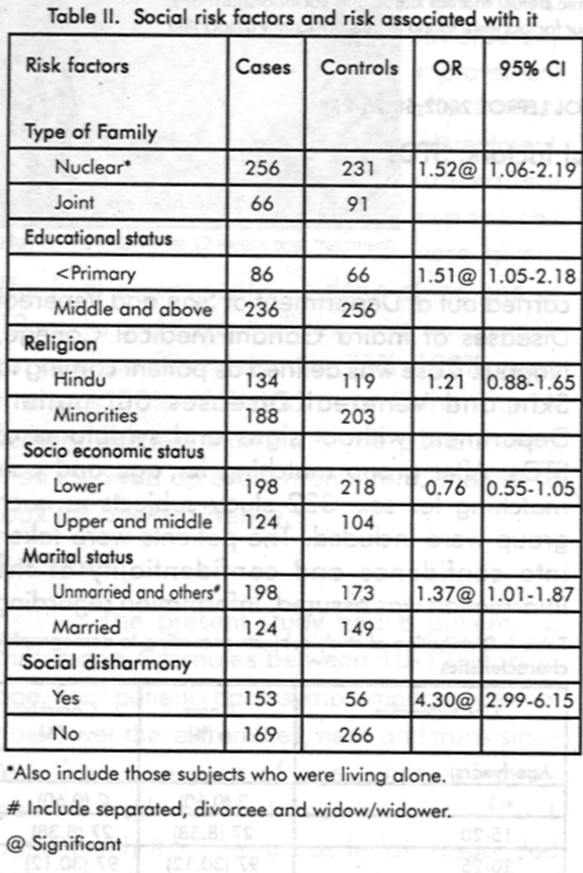 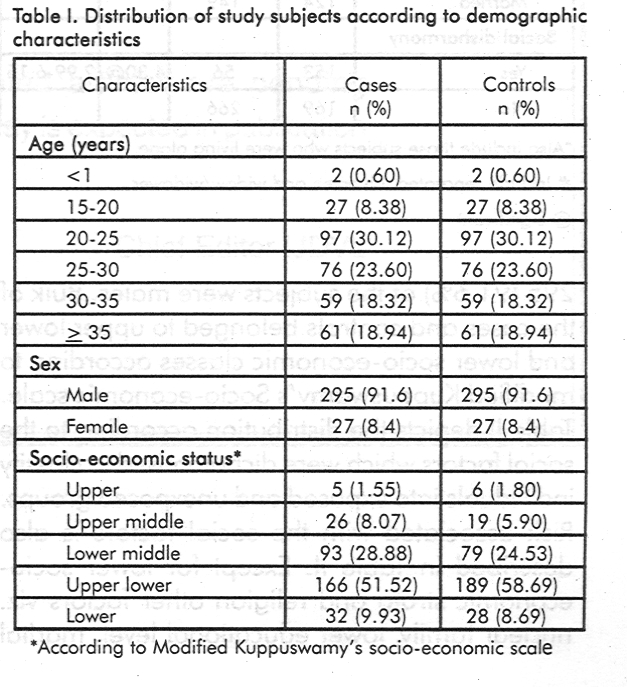 Sexually Transmitted Diseases (STDs) are an important public health problem not only because of their severe complications and sequelae but also because they increase the risk for transmission of the human immunodeficiency virus.[1] Apart from physical morbidity, the victim also suffers from the social consequences of acquiring STDs. However there are some social factors which make an individual more vulnerable to indulge into risk-taking behaviours, thereby increasing the risk of acquiring STDs. These social factors include educational status, socio-economic status, marital status, type of family, religion, social disharmony, etc. However, very few studies[2],[3],[4] have reported the role of these social factors in acquring STDs and that too not comprehensively. Fortified with this fact the present case-control study was undertaken to study the role of social factors in acquiring sexually transmitted diseases.

The present case-control study was carried out at Department of Skin and Venereal Diseases of Indira Gandhi Medical College, Nagpur. Case was defined as patient coming to Skin and Venereal Diseases out patient Department without signs and symptoms of STDs. After group matching for age and pair matching for sex, 322 study subjects in each group were included. The patients were taken into confidence and confidentiality of the information was assured. Information regarding demographic characteristics was collected on pretested questionnaire using interview technique/statistical analysis included calculation of proportion, odds ratio and their 95% confidence intervals.

[Table - 1] shows the distribution of study subjects according to demographic characteristics. Majority (53.72%) of the study subjects belonged to 20-30 years age group. 295 (91.6%) of the subjects were males. Bulk of the cases and controls belonged to upper lower and lower socio-economic classes according to modified Kuppuswamy′s Socio-economic scale. [Table - 2] depicts the distribution according to the social factors which were dichotomised to classify individuals into exposed and unexposed groups. Risk associated with the social factors is also described in [Table - 2]. Except for lower socioeconomic strata and religion other factors viz. nuclear family, lower educational level, marital status and presence of social disharmony were found to be significantly associated with STDs.

The present case control study shows that majority of the subjects belonged to 20-30 years group. This period has maximum sexual activity, the chances of exposure are also likely to be increased and hence more prevalence is found in that age group.[2],[3] Males enjoy more freedom in all respects in society including sex because of which there is high proportion of males as compared to females.

The study included as many as six risk factors viz. type of family, educational status, religion, socio-economic status, marital status and social disharmony. Those who were single or living in nuclear family were at increased risk as compared to those living in joint family (OR=1.52;95% Cl=1.06-2.19). This high risk may be due to loneliness or frustration because of which they are likely to fall prey to the STDs or there might be nobody to supervise, guide or advise individuals living in nuclear family.[6],[7]

Significant low educational status could be reason for unawareness of mode of transmission and preventive measures for STDs.[2],[3] Religion and lower socio-economic status were found to be non-significant risk factors. This could be due to the similar distribution of cases and controls in exposed and unexposed group as the hospital being a governmental institute where patient turnover is from lower socioeconomic classes. Earlier studies have also shown the non-significance of religion[4] and lower socio-economic class.[8] The unmarried, separated, widow and divorcees are exposed to high risk sexual behaviour to satisfy rheir sexual desire which increases the chance of acquiring STDs. This could explain the excess risk among unmarried and singles as compared to married subjects (OR=1.37; 95% CI:1.1.01-1.87).

Basserr et al[9] found that marital status was independent risk factors for HIV infection whereas Moses et al[10] in their study found that in multivariate analysis, the important predictor of STD acquisition was marital status (unmarried or married but living apart from their wives). Social disharmony in form of broken homes, quarrels in family and child abuse were found to be a significant social risk factor (OR=4.30;95% Cl: 2.99-6.15) as reported by Bartholow et al.[11] Thus to conclude, the present study recognised nuclear family and those living alone, lower educational status, unmarried and those married but living apart from their partners and social disharmony as significant risk factors for acquiring STDs.