Solitary nodular lesion on forehead in a 56-year-old woman

A 56-year-old woman came to the surgical out-patient department of ESIC Medical College and Hospital, Faridabad, Haryana, with a swelling above the left eyebrow which she noticed since 5 years. There was no history of trauma. There was no significant past history or other relevant complaints. Systemic examination was within normal limits. On local examination, a well-circumscribed reddish nodular lesion of size 2 × 2 cm was seen just above the left eyebrow [Figure - 1]. It was non-tender and soft to firm in consistency.

Fine-needle aspiration was done; smears were moderately cellular, comprising of tight clusters of small basaloid cells with scant cytoplasm, round to oval bland nuclei and inconspicuous nucleoli. Basement membrane material was seen lying in between the tumor cells with cells embedded in it. A few histiocytes along with multinucleated giant cells were seen in the background.

An excision biopsy was advised. A grey-white soft tissue mass measuring 2 × 1 cm was excised, from which multiple sections were taken. There was a well-circumscribed lesion in the dermis comprising lobules of basaloid tumor cells, separated by fibrous septa [Figure - 2]. On further sections, a few of the lobules showed presence of retraction artifacts [Figure - 3], mitotic figures (3-4/10 high power field) [Figure - 4] and a few horn cysts. No amyloid or melanin was seen in the sections examined. An immunohistochemistry panel comprising of CD10 [Figure - 5], CD34, bcl-2 [Figure - 6], epithelial membrane antigen and cytokeratin 20 was advised.

What is Your Diagnosis?

On immunohistochemistry, CD10 showed focal cytoplasmic membranous positivity in tumor cells and stromal negativity. Bcl-2 was diffusely positive in the cytoplasm of tumor cells, although weak; while CD34, epithelial membrane antigen and cytokeratin 20 came out to be negative. So a final diagnosis of basal cell carcinoma was arrived at. The margins of the lesion were free of the tumor. On follow-up, it was found that the patient was doing well.

It is very difficult to differentiate between trichoepithelioma and basal cell carcinoma, which poses a great difficulty for both the clinicians as well as the pathologists.[1] Trichoepithelioma is a benign neoplasm derived from basal cells in the hair follicle. It may occur sporadically or is inherited in an autosomal dominant pattern. The principal feature of a common genetic disorder called multiple familial trichoepithelioma is the presence of many small tumors, predominantly on face.[2] Both basal cell carcinoma and trichoepithelioma can present as solitary, slow-growing, flesh-colored papules or nodules with a pearly appearance, commonly located on the face.[1] Similarly in the present case, the patient presented with a flesh-colored nodule on the face. 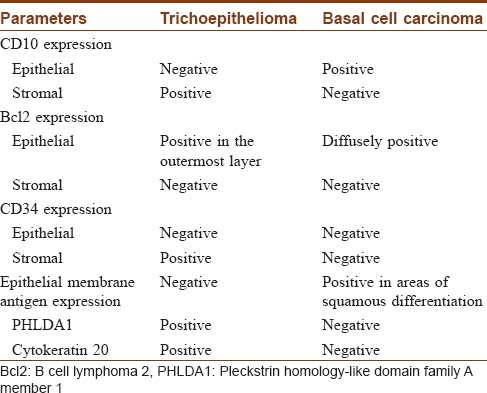 In the present case, a diagnosis of basal cell carcinoma was favored over trichoepithelioma due to some supporting histomorphological features like focal connection with the epidermis, retraction artifact and mitosis along with focal membranous staining of CD10 in the basaloid cells and weak diffuse positivity of bcl-2 on immunohistochemistry.

Both the tumors share similar clinical as well as histological features. It is very important to distinguish these neoplasms because they have variable clinical behavior and require different therapeutic planning. Basal cell carcinoma is a locally aggressive neoplasm and must be totally excised with safe margins. However, trichoepithelioma is a benign neoplasm, which may be partially excised by shaving.[6]

The authors certify that they have obtained all appropriate patient consent forms. In the form, the patient has given her consent for the images and other clinical information to be reported in the journal. The patient understands that name and initials will not be published and due efforts will be made to conceal identity, but anonymity cannot be guaranteed.