Background/Purpose: Genetic factors play an important role in the pathogenesis of vitiligo. Cyclooxygenase 2 (COX2) gene induced by ultraviolet radiation controls the synthesis of prostaglandins, which are are found to be beneficial in treating vitiligo. COX2 gene polymorphism has been previously evaluated in Chinese population. We aimed to study the relation between two common COX2 gene polymorphisms with vitiligo and its subtypes amongEgyptian patients.
Patients and Methods: This study included 200 participants (100 vitiligo patients and 100 healthy controls). COX2-765G/C and -1195A/G gene polymorphism was studied by restriction fragment length polymorphism polymerase chain reaction analysis and the results were compared between the two groups and among different subtypes of vitiligo.
Results: Frequency of COX2-1195 AA, AG, GG genotypes showed no significant association among patients with vitiligo (P = 0.626, 0.321, 0.08, respectively); those with generalized vitiligo (P = 0.739, 0.291, 0.101, respectively) and those with segmental vitiligo (P = 0.410, 1.00, 0.676, respectively) compared to the control group. Regarding COX2-765G/C genotypes, GG genotype was more frequent among patients with vitiligo [84 (84%)] compared to controls [63 (63%)] (P = 0.001). GC genotype was significantly less frequent [15 (15%)] among patients compared to controls [32 (32%)] (P = 0.005). Generalized and segmental types of vitiligo also showed no significant difference in the frequency of COX2-765G/C genotypes compared with controls.
Limitations: Being a pilot study, a relatively small number of participants were included.
Conclusion: COX2-1195A/G gene polymorphism is not associated with the risk of developing vitiligo or with vitiligo subtypes. COX2-765 GG genotype is associated with vitiligo, especially of the generalized type.

Vitiligo is a common acquired depigmentation disorder of the skin manifested clinically as white macules.[1] Clinical presentation includes segmental, non-segmental, and mixed vitiligo.[2] Though its exact pathogenesis is not clearly known, vitiligo is considered as a multifactorial disease 3 in which genetic and environmental factors play a role.[4]

According to genetic hypothesis, vitiligo has a multigenic inheritance. Several attempts have been made to identify a risk group pattern for vitiligo by genetic analyses.[5]

Cyclooxygenases are key enzymes that mediate the conversion of free arachidonic acid into prostaglandin H2 and other eicosanoids.[13],[14],[15] There are two major cyclooxygenase (COX) isoforms, COX1 and COX2. COX1 is constitutively expressed in most cell types, while COX2 is not normally expressed in most tissues, but can be induced to do so by several stimuli including growth factors, cytokines, and tumor promoters.[16] Ultraviolet radiation is a known stimulus for COX2 expression in the epidermis.[17],[18] Ultraviolet-induced COX2 expression increases prostaglandin E2.[19]

COX2 gene is mapped to chromosome 1q25.2–q25.3 and is about 8.3 kb in size.[20] Polymorphisms may either eliminate or create binding sites for various factors, potentially altering the expression of COX2. Among the several single nucleotide polymorphisms in COX2, promoter polymorphisms COX2-1195A/G and -765G/C have been shown to modify COX2 transcription and messenger ribonucleic acid levels.[21]COX2-765G/C polymorphisms were associated with the production of prostaglandin E2.[22]

This study included 100 patients with vitiligo and 100 healthy individuals as controls. All participants were recruited from the dermatology outpatient clinics of Ain Shams University Hospital, Cairo, Egypt and National Research Centre, Giza, Egypt. Vitiligo was classified as segmental or nonsegmental.[26] Segmental vitiligo was diagnosed if the disease had a dermatomal distribution. Active vitiligo was defined as the appearance of new lesions or the enlargement of existing lesions in the three months before presentation.[25]

All participants gave informed consent to participate in this work. The study was approved by the research ethics committee of National Research Centre, Giza, Egypt.

All participants were subjected to full history taking, general and dermatological examination, and venous blood sample collection for the study of COX2 -765G/C and -1195A/G gene polymorphisms.

Restriction fragment length polymorphism polymerase chain reaction analysis was used to amplify the COX2 polymorphisms (-765G/C and -1195A/G) according to Zhang et al., 2005.[21] The primers used to amplify the target fragments containing these two polymorphisms were: 5′-TCTCACCCTCA-CATGCTCCT-30 (forward) and 5′-TCTTTTCTGTCCACTTTTCCAA-3′ (reverse) for COX2-1195A/G; 5′-ATGAGGAGAATTTACCTTTCGC-3′ (forward) and 50-TTTTGTGGAATGAAATAGCTACCT-3′ (reverse) for COX2-765G/C.

The polymerase chain reaction products were confirmed by electropheresis on 2% agarose gel and visualized by ethidium bromide staining.

Continuous variables were expressed as mean and standard deviation (SD). Categorical variables were expressed as frequencies and percentages. Student's t-test and analysis of variance (ANOVA) test were used to assess the statistical significance of the difference between two and more than two study group means, respectively. Chi square and Fisher's exact test were used to examine the relationship between categorical variables. Logistic regression was used for calculating odds ratio. A significance level of P < 0.05 was used in all tests. All statistical procedures were carried out using statistical package for the social sciences (SPSS) version 15 for Windows (SPSS Inc, Chicago, Illinois, United States of America). 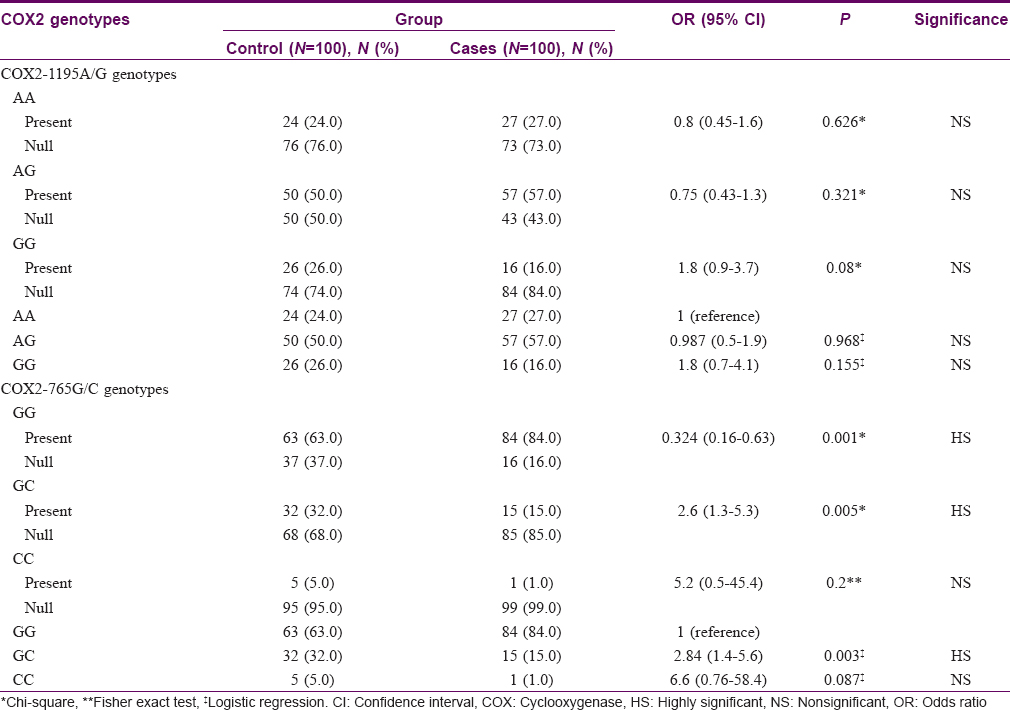 Table 1: Comparison between vitiligo patients and controls regarding COX2-1195A/G and COX2-765G/C gene characteristics

Comparison between vitiligo patients with different COX2-765G/C genotypes regarding age, sex, family history of vitiligo (P = 0.309, 0.078, and 0.816, respectively), as well as disease duration, subtype, and activity showed no statistically significant difference between the two groups (P = 0.880, 1.00, and 0.682, respectively).

Frequencies of COX2-1195A/G genotypes did not seem to vary with age, sex, disease duration, subtype or activity. However, family history was found to be related with this polymorphism; as patients with -1195 AA genotype showed a significantly higher percentage and patients with AG genotype showed a significantly lower percentage of positive family history of vitiligo. This denotes that COX2-1195A/G gene polymorphism may be related to familial occurrence of the disease.

Regarding COX2-765G/C polymorphism, we found that GG genotype was significantly more frequent whereas GC genotype was significantly less frequent among patients (including those with generalized vitiligo) compared to the control group. Patients with COX2-765 GC genotype have a lower risk of having vitiligo and specifically the generalized type. So COX2-765 GC genotype seems protective against vitiligo. This could be as a result of enhanced prostaglandin biosynthesis as a functional consequence of −765G/C polymorphism.[21] This finding is biologically rational as the −765G/C change also creates a binding element for the E2F transcription factor, a cyclin-dependent regulator of expression of several genes.[21] In contrast to generalized vitiligo, we found that the segmental type is not related to COX2-765G/C gene polymorphism. These results are contradictory to that of Li et al. which found no relationship between the COX2-765 polymorphism and vitiligo risk.[25] It is possible that rare functional alleles are present in linkage disequilibrium with the alleles assessed in the present study.,[21] Our results may explain the beneficial effect of topical prostaglandin E2 in the treatment of localized vitiligo.[11],[12]

Limitation of this work is the relatively small number of participants as this is a pilot study. Studies with a larger sample size are needed to validate our findings.

COX2-1195A/G gene polymorphism was not related to the risk of developing vitiligo or to vitiligo subtypes in the Egyptian population studied. However, COX2-765 GG genotype was associated with a higher susceptibility to develop vitiligo especially of the generalized type. These results may support the possible beneficial effect of topical prostaglandins in vitiligo treatment.