Sub-block level monitoring in leprosy programme: Need of the hour

In the year 2004–2005, the Government of India decided to extend the focus of attention under the National Leprosy Eradication Programme from endemic states to certain high-priority districts and blocks under a special situational plan called Block Leprosy Awareness Campaign.[1] Specific activities are planned and being followed for high- and low-endemic districts and blocks with an objective of achieving elimination of leprosy in the 12th 5-year plan period (2012–2017).[2] Every year, the Central Leprosy Division publishes an annual progress report containing details of the number of districts reporting annual new case detection rate (ANCDR) of less than 10 per 100,000 population. Any district with annual new case detection rate of less than 10 per 100,000 population is considered non-endemic and the number of such districts is regularly monitored. The annual new case detection rate at the district level has remained stagnant in most of the states in the last few years. The state leprosy officers have shown concerns that programme activities as designed for the National Leprosy Eradication Programme are not being fully carried out at the block primary health centre level, resulting in inability to deliver quality services as desired.[2]Hence, the National Leprosy Eradication Programme of India, in its plan for the year 2013–2017, has proposed special search activities for high endemic blocks to be carried out twice in a year.[2]

Since 2010–2011, on an average, Maharashtra reports that 12 to 14 (~40%) out of 35 districts have an annual new case detection rate less than 10 per 100,000 population with the numbers fluctuating between 11 and 16 districts in various years [Table - 1].[3] A similar trend is observed in Chhattisgarh with 6–7 districts (~39%) out of 18 districts on an average every year. The trend is the same in most of the states in India and similar patterns are observed when analyzing the annual new case detection rate at the block level in most states. As these rates at the district and block level are not changing much over the years, these do not yield any extra information from a planning point of view. Hence, to better assess the leprosy situation in the field, the programme administrators' concerns need to shift to smaller areas below block level to allow for programme strengthening and planning of alternate strategies. 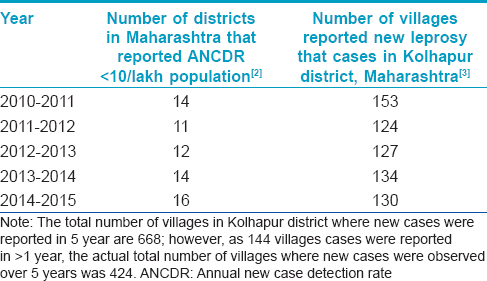 Table 1: Number of districts in Maharashtra reporting annual new case detection rate less than 10 per 100,000 and number of villages reporting new leprosy cases in Kolhapur district, Maharashtra, from 2010 to 2015

For example, Kolhapur district in Maharashtra has 1212 villages in total, of which new leprosy cases were reported only in 424 villages (35%) during the period from 2010-2015 [Table - 1].[4] This may indicate that either the disease is endemic only in these 424 villages or conversely that the activities of the National Leprosy Eradication Programme are being better implemented allowing for better case detection in these villages. The other explanation could be that the villages reporting no new cases may be harboring infected individuals who are still in the incubation period.

As most indicators in leprosy are programmatic rather than epidemiological, studying the trends of annual new case detection rate at the sub-block level over 4 to 5 years will be helpful in estimating the real targets for sub-block level monitoring. So far, the reported number of registered cases is based entirely on operational data which reflect the extent of on-going work more than the extent of the leprosy problem. But, the introduction of the “Rate of new cases with grade 2 disabilities per 100,000 population” as a new indicator by the World Health Organization indicator may be less influenced by operational factors and act as a more robust marker of the occurrence of leprosy in the community.

If India aims to reach an annual new case detection rate of less than 10 per 100,000 population in all the districts by 2017, there must be a greater thrust to monitor the new case detection below the block level. It should encompass all areas, with monthly village to village monitoring along with recording of new child cases among total cases rather than the consolidated district or block level annual new case detection rate alone. This is important because even a single new case with grade 2 disability or a single new child case may be evidence of hidden endemicity of leprosy in that area. To sustain the achievements made so far, villages that report a “zero new case” for 5 consecutive years can be named areas with “zero leprosy reported.” Once an area is marked as “zero leprosy reported,” efforts should be made to sustain that achievement. At the same time, targets to be achieved should be in terms of the “number of villages/blocks” with “zero leprosy”. We believe that only when such targets are set, the leprosy programme will move forward towards complete elimination/eradication.