Subclinical atherosclerosis and cardiovascular markers in patients with lichen planus: A case–control study

Background: Lichen planus is an idiopathic and chronic inflammatory disease that affects the skin and the mucous membranes, and has been associated with an increased risk for cardiovascular diseases. Hyperhomocysteinemia has been regarded as a risk factor for atherosclerosis and cardiovascular diseases. Increased plasma fibrinogen levels are also associated with increased risk of myocardial infarction.
Objective: The main aim of this study is the evaluation of common carotid artery mean intima media wall thickness, serum fibrinogen and homocysteine levels in patients with lichen planus.
Methods: Forty-three patients with lichen planus and 43 age, gender and body mass index (BMI) matched healthy controls (from general population without the disease) were included in this study.
Results: Compared to the healthy controls, patients had statistically significant greater mean intima media wall thickness of the common carotid artery. Moreover, a positive correlation was observed between lichen planus and increased serum homocysteine and c-reactive protein levels.
Limitations: The main limitation of this study is the small sample size due to the time limitation and financial constraints.
Conclusion: Early diagnosis of atherosclerosis in patients with lichen planus might afford better prophylaxis, including weight control and/or lipid profile monitoring. Measurement of the mean intima media wall thickness of the common carotid artery by duplex high-resolution B-mode ultrasound scanning could be beneficial as a valuable method for early diagnosis of atherosclerosis in lichen planus.

Lichen planus is an idiopathic inflammatory skin condition, characterized by itchy, small, polygonal, flat-topped pink or purple lesions on the arms and legs. Other parts of the body may also be involved, including the mouth, nails, scalp, vulva, vagina and penis. Involvement of the scalp can result in hair loss, sometimes permanent.

Although its etiology remains unknown, it is believed that lichen planus represents a T-cell-mediated inflammatory disorder. Psoriasis is associated with an increased risk of cardiovascular diseases, metabolic syndrome and dyslipidemia. Being similar to psoriasis, it is possible that lichen planus may also be associated with such a risk, as a result of chronic inflammatory disease.[1],[2],[3]

Homocysteine is an amino acid in the body and an essential amino acid present in foods regularly consumed within the diet.[4] Hyperhomocysteinemia has been regarded a risk factor for atherosclerosis and cardiovascular diseases.[5] It has been seen as an independent risk factor for cardiovascular disease in adults.[6],[7] An increase of 5 μmol/L of homocysteine in serum was associated with a significant increased risk of ischemic heart disease, thromboembolism and stroke. A small number of studies have shown that homocysteine was increased in patients with lichen planus.[8],[9]

Fibrinogen is a circulating glycoprotein involved in wound-healing, thrombosis, platelet aggregation and inflammation which also plays a role in cell adhesion, vasoconstriction and chemotactic activity.[10] Increased plasma fibrinogen levels are also associated with increased risk of myocardial infarction, stroke and vascular mortality.[11] Increasing evidence from epidemiological studies suggests that elevated plasma fibrinogen levels may promote a prothrombotic or hypercoagulable state and are associated with an increased risk of cardiovascular disorders.[12]

In this study, we evaluated the potential association between subclinical atherosclerosis and lichen planus. We measured mean intima-media wall thickness of common carotid artery and serum fibrinogen and homocysteine in patients with lichen planus and compared them with those in sex- and age-matched controls.

A total of 43 consecutive patients with lichen planus presenting to dermatology clinic completed study examinations and follow-up; 43 age, gender and body mass index-matched controls were also included in this study. The controls were selected amongst companions of patients with cosmetic problems who were attending the dermatology clinic, and without any known dermatologic disease. The matching algorithm for age is as follows: the frequency of controls in each 5-year interval equalizes to the number of patients on it. In addition, the total P value for age is 0.26 [reported in [Table - 1]] which is not statistically significant. Participants were ≥18 years. The diagnosis of lichen planus was based on clinical findings and confirmed by biopsy. Participants were recruited from Shohada-e-Tajrish Hospital of Shahid Beheshti University of Medical Sciences, Tehran, Iran, between January 2014 and January 2015. The institutional ethics committee approved the study protocol which was formulated as per the Declaration of Helsinki. The inclusion criteria were the presence of lichen planus affecting the skin or mucosa and the participants signing an informed consent before participation. The exclusion criteria were as follows: 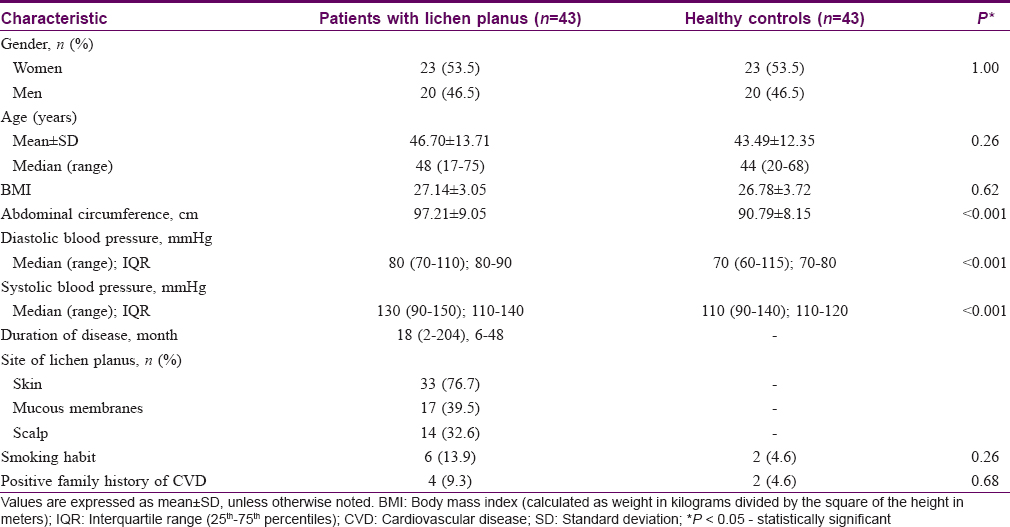 Table 1: Demographics and clinical characteristics of patients with lichen planus and healthy controls (who did not have lipid profile abnormality)

Data was gathered on smoking, alcohol consumption and personal or family history of cardiovascular disease. The presence of metabolic syndrome was determined according to adult treatment plan-III criteria if three or more of the five following criteria were present:[14] abdominal circumference >102 cm in men and >88 cm in women; hypertriglyceridemia >150 mg/dL, high-density lipoprotein cholesterol >40 mg/dL in men and >50 mg/dL in women, blood pressure >130/85 mm Hg or glucose levels >110 mg/dL. The presence of dyslipidemia was defined by the following parameters: triglycerides >150 mg/dL, total cholesterol >200 mg/dL and low-density lipoprotein cholesterol >130 mg/dL.

Continuous variables are expressed as mean ± standard deviation or as medians with total and interquartile ranges (25th to 75th percentiles). Categorical data were reported as numbers (percentages). Shapiro–Wilk's W-test was used to examine the normality assumption of continuous variables.

Spearman's correlation test was used to assess the association between mean intima-media wall thickness and other continuous variables.

A total of 43 patients with lichen planus and 43 healthy control subjects (who do not have lichen planus) matched for age, gender and body mass index were recruited in this study. The demographics and baseline clinical characteristics of the two groups are summarized in [Table - 1]. The two groups did not differ significantly on age, gender, body mass index, positive family history of cardiovascular disease and self-reported smoking habits [Table - 1]. The severity in all lichen planus subtypes constitutes a wide range from limited to generalized involvement; from early stage of limited inflammation to cicatricial follicular involvement and from reticular non-erosive type to ulcerative mucosal involvement. The analysis of the association between different subtypes and severity of lichen planus with parameters of this study was not performed due to the small sample size.

Table 2: Laboratory findings and mean intima-media wall thickness of common carotid artery of patients with lichen planus and healthy controls (who did not have lipid profile abnormality)

Table 3: Serum levels of c-reactive protein, homocysteine and fibrinogen according to metabolic syndrome and dyslipidemia status in patients with lichen planus

No significant difference was found in median serum c-reactive protein and homocysteine and fibrinogen levels of patients with and without metabolic syndrome [P = 0.24, P = 0.87 and P = 0.40, respectively; [Table - 3].

In addition, the median mean intima-media wall thickness of common carotid artery was significantly higher in patients with lichen planus with dyslipidemia compared with that of patients without dyslipidemia [P = 0.001 and [Table - 3].

According to the results of covariance analysis, there was no significant difference in the mean intima-media wall thickness of common carotid artery of the two groups after adjusting for age, systolic blood pressure and fasting blood glucose levels of subjects (P = 0.19).

Lichen planus is a chronic inflammatory mucocutaneous disease of unknown etiology and may be caused by a cell-mediated immunological response. When inflammation becomes chronic, the changes in lipid profile become sustained and thereby augment the accumulation of cholesterol in cells and formation of lipid foam cells which, in turn, produce fatty streaks in the arterial walls. This increases the chance of occurrence of atherosclerotic plaques, which may lead to symptomatic cardiovascular disease in such patients.

Recent studies have documented dyslipidemia and increased cardiovascular risk factors in patients with lichen palnus.[16],[17] Previous reports showed that increased high-sensitivity c-reactive protein, insulin resistance, dyslipidemia, obesity and hypertension play an important role in the pathogenesis of atherosclerosis and cardiovascular disease.[18] Our results showed that patients with lichen planus had a significantly abnormal lipid profile, and a high association with obesity and metabolic syndrome compared with controls, which was consistent with previous studies.

Homocysteine is known to have proatherogenic and prothrombotic effects mediated through adverse effects on platelet, endothelial and smooth muscle cell function.[19] It has been demonstrated that homocysteine may have permissive role in endothelial damage of coronary artery mediated by increasing oxidative stress.[20] Similar to findings in previous studies, serum levels of homocysteine were significantly higher in patients than in controls in our study. Previous studies mentioned that homocysteine is an independent predictor of atherosclerotic events and of carotid intimal-media thickness in hyperlipidemic subjects.[21] However, our results showed that homocysteine levels were not significantly associated with increased intima-media wall thickness of common carotid artery in either cases or controls. However, homocysteine was increased in patients with lichen planus and could be a predictor of cardiovascular disease.

We found some previous studies that evaluated subclinical atherosclerosis in patients with lichen planus and showed, similar to this study, that mean intima-media wall thickness of common carotid artery is significantly elevated in lichen planus compared with the controls.[24],[25]

Our cross-sectional single-center study has some notable limitations. The main limitation is the small sample size, which, in turn, makes it statistically infeasible to assess the association between different subtypes of lichen planus, severity and duration of disease and cardiovascular risk. Future multicenter studies with a larger sample size are needed to more definitively determine the associations between lichen planus and atherosclerosis.

Finally, early diagnosis of atherosclerosis in patients with lichen planus may afford better prophylaxis, including weight control and/or lipid profile monitoring. Measurement of the mean intima-media wall thickness of common carotid artery by duplex high-resolution B-mode ultrasound scanning could be beneficial as a valuable method for early diagnosis of atherosclerosis in lichen planus.