Subcutaneous phaeohyphomycosis caused by Bipolaris hawaiiensis in an immunocompetent patient

Phaeohyphomycetes are dematiaceous (brown pigmented) fungi which derive their pigmentation from melanin in cell walls. Cutaneous and subcutaneous infections due to this group of fungi are reported globally, usually following traumatic implantation of the fungal elements through contaminated soil, wood splinters or thorns. Bipolaris hawaiiensis is a phaeohyphomycete which belongs to division Deuteromycota and genus Cochliobolus. They have been occasionally found in humans, mainly as chronic colonizers and in patients with allergic sinusitis. We present a case of post surgery subcutaneous infection due to Bipolaris hawaiiensis, which has very rarely been reported in the literature.

A 30-year-old lady presented with complaints of recurrent swelling and pus discharge from a laparotomy surgery scar for 3 months. She had undergone surgery for removal of ovarian cysts due to polycystic ovarian disease, two weeks prior to the beginning of these complaints. There was mild to moderate pain at the site in addition to occasional discharge of pus. She later developed multiple similar swellings on the surgery scar and was prescribed antibiotic courses.She would partially respond to these drugs and relapse on stopping the medicines.

Dermatological examination revealed multiple painless nodules on and in the region surrounding the abdominal surgical scar [Figure - 1]. There was no evidence of any underlying immunosuppression or other risk factors. Biopsy from the medial and uppermost swelling revealed the presence of dense granulomatous infiltrate and fungal material [Figure - 2]. Microscopic examination of nodular tissue after treatment with 10% KOH revealed light brown septate hyphae. The material was cultured on potato dextrose agar (PDA). Colonies on PDA after 7 days were whitish-grey, which later became blackish brown. The growth on Sabouraud′s agar was downy grayish within 3-6 days, which rapidly became woolly gray along with dark pigmentation on the reverse of the colony. A slide culture of the isolate on corn-meal agar stained with Lactophenol Cotton blue (LCB) showed brown septate hyphae with geniculate, sympoidal conidiophores bearing conidia through pores [Figure - 3]. Conidia were ellipsoidal and rounded at the ends with 4-6 pseudoseptae which did not extend to the cell wall and cells were enclosed within sacs. The fungus was identified as Bipolaris hawaiiensis on the basis of cultural characteristics and the arrangement of poroconidia on LCB mount. Anti-fungal susceptibility testing was carried out by agar dilution method (a modification of the Clinical Laboratory Standards Institute (CLSI) broth based methodology) and the isolate was found to be sensitive to itraconazole. Surgical evacuation of the collection was done and oral itraconazole, 400 mg was administered twice daily to which there was a good response after 16 weeks [Figure - 4].

Bipolaris is a filamentous dematiaceous fungus that usually grows on plant debris and in soil. It is an emerging human pathogen that has been occasionally reported from countries with hot climates like southern states of USA, Australia, Pakistan and India.The increasing incidence is due to the ever increasing population of immunosuppressed patients. Several reports of allergic fungal sinusitis (AFS) due to Bipolaris have appeared in the literature. [1] Other human infections reported include allergic bronchopulmonary disease, keratitis, orbital cellulitis, prosthetic heart valve infection, meningoencephalitis and osteomyelitis. 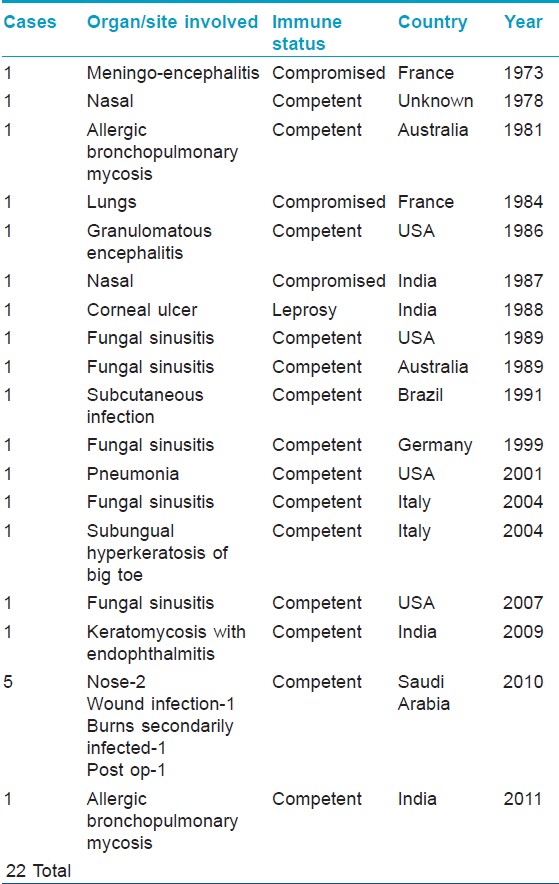 Amphotericin B, itraconazole, voriconazole and surgical excision were reported to be successful modes of therapy. Surgery is preferred in immunocompromised patients.

We acknowledge the assistance provided by our lab technician, Mr. B Damodara Rao in microbiological investigations.