Subcutaneous phaeohyphomycosis is an infection of the skin and subcutaneous tissue, caused by dematiaceous fungi. An adult male presented with a history of multiple reddish nodules over the face and hands. Histopathological examination of the skin biopsies showed a dense granulomatous infiltrate of macrophages, containing intracytoplasmic basophilic bodies throughout the dermis. Gomori methenamine-silver stained sections revealed yeast cells within macrophages. Multiple cultures on Sabouraud's dextrose agar grew Cladophialophora boppii. The patient was treated with oral itraconazole for a year and the response monitored with dermal ultrasound. This is the first case report of subcutaneous phaeohyphomycosis caused by Cl. boppii in India.
Keywords: Phaeohyphomycosis, dematiaceous fungi, Cladophialophora boppii, ultrasound biomicroscopy, itraconazole

Dematiaceous fungi are characterized by their dark pigmentation derived from the melanin complex in their cellular wall. The major infection patterns, typically based on histological findings, are grouped into three broad classes: chromoblastomycosis, phaeohyphomycosis, and eumycotic mycetoma. Phaeohyphomycosis is an umbrella term for all those mycoses where the fungus is present in host tissues with melanized filaments, and represents a broad range of primary and opportunistic mycoses by Fonsecaea, Exophiala, Cladophialophora and others. [1] Subcutaneous phaeohyphomycosis involves skin and subcutaneous tissue. We present this case of subcutaneous phaeohyphomycosis due to the rarity of the etiological agent and the unusual clinical manifestation. This is the first case report of subcutaneous phaeohyphomycosis caused by Cladophialophora boppii in India. Also, another interesting aspect of this case is the use of ultrasound biomicroscopy with 50 MHz ultrasound in monitoring the treatment response which helped us to decide the duration of therapy, in the absence of established guidelines for the same.

A 23-year-old Indian man, software engineer by occupation, with no medical history, presented with a 2-month history of slowly growing multiple asymptomatic reddish nodules which appeared simultaneously on the face and right hand. He was otherwise well. The patient denied any apparent antecedent trauma, arthropod bite, family history or contact with a person with similar lesions or foreign travel. He had not sought any treatment previously.

Physical examination revealed multiple erythematous, non-tender, firm nodules ranging in size from 0.5 to 0.8 cm on the right lower eyelid [Figure - 1]a and right hand, and a tumid plaque about 1 Χ 1 cm on the chin [Figure - 1]b. The nodule on the eyelid showed surface crusting. Regional lymph nodes were not enlarged. There was no thickening of peripheral nerves or loss of sensations. A review of systems revealed no abnormalities.

The patient was treated orally with itraconazole 200 mg and 30 drops of supersaturated solution of potassium iodide per day. The hand lesion did not recur following excision. At 4 months of therapy, the chin lesion was excised due to absence of clinical improvement; however, histology and cultures were negative for Cl. boppii. The potassium iodide was discontinued and oral itraconazole continued. At 9 months of therapy, there was noticeable reduction of the eyelid swelling with minimal erythema and post-inflammatory hyperpigmentation. The chin lesion did not recur following excision. However, ultrasound biomicroscopy in the region of the affected eyelid using a 50 MHz probe revealed a normal epidermal entry echo, a well-defined oval hypoechoic mass lesion (granuloma) measuring 2.5 Χ 1.5 mm in the dermis with normal underlying subcutaneous tissue [Figure - 4].

Hence, therapy was continued to a total duration of 1 year at the end of which the lesion healed with post-inflammatory hyperpigmentation [Figure - 5], and a repeat ultrasound biomicroscopy showed healing of the dermal granulomas. Five months after completion of the therapy, there was no recurrence of lesions.

Dematiaceous fungi are characterized by their dark pigmentation derived from the melanin complex in their cellular wall. They are ubiquitous in nature, found mostly in soil and vegetation. Infection is probably introduced by traumatic inoculation or inhalation of the etiologic agent. Trivial unnoticed trauma may be responsible for initiating infection in this case. Chromoblastomycosis, eumycetoma and phaeohyphomycosis are the distinct clinical syndromes. [1],[2],[3],[4] 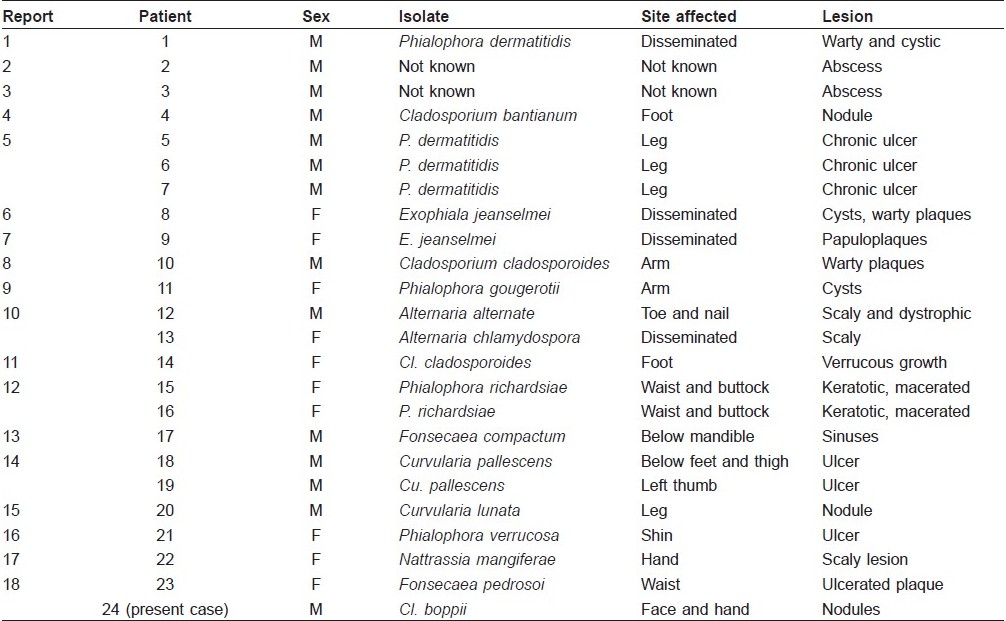 Laboratory diagnosis includes isolation of fungal hyphae on potassium hydroxide mounts and culture on Sabouraud′s dextrose agar. [4] Histopathologically, the lesions show brown-walled septate hyphae or yeast or a combination of both in tissue. The Fontana-Masson stain (specific for melanin), periodic acid-Schiff and Gomori methenamine-silver stains can be used to confirm the diagnosis. [4],[5]

Local infection may be cured with excision or cryotherapy alone, or in combination with antifungals. [2] Dematiaceous fungi are most susceptible to itraconazole, voriconazole and posaconazole. Ketoconazole and fluconazole have limited activity. Amphotericin-B and 5-flucytosine may be used. Systemic disease is often refractory to therapy. [4],[7] The precise duration of therapy is not established, and it may range from 1 to 48 months. Hence, non-invasive techniques like ultrasound biomicroscopy can be useful in delineating the dermal lesions and monitoring response to therapy.

In our case, the duration of treatment was decided based on ultrasound findings in spite of apparent clinical resolution. As there are no conclusive guidelines regarding duration of antifungal therapy which may range widely, UBM can be a useful tool to guide duration of therapy.