Sulfasalazine induced lichen planus in a patient of rheumatoid arthritis

Lichen planus (LP) is a fairly common inflammatory skin disorder that affects skin, mucous membranes, nails, and hair. Overall incidence has been estimated between 0.14 and 0.80% worldwide. [1] Classical lesions of LP are characterized by shiny, violaceous, flat topped polygonal papules, which can be closely aggregated or widely distributed, especially on the flexures of wrist, lumbar region, and around ankles. [1] Drug induced LP or lichenoid drug eruption (LDE) can appear identical to classical lesions of idiopathic LP; however, the former is usually less pruritic, more psoriasiform, rarely involves oral mucosa and tends to be more widespread with variable desquamation. [2] The eruption usually appears symmetrically on the trunk and extremities, unlike the flexural distribution of classic LP and lacks Wickham′s striae. Differentiating drug-induced LP from classical LP is sometimes difficult and most evidence is based on de-challenge and re-challenge with the implicated drug [Table - 1]. [3]

There is an ever-increasing list of drugs causing lichenoid drug eruption. Few of the most commonly attributable drugs are gold, mepacrine, penicillamine, demeclocycline, thiazide diuretics, amlodipine, etc. [2],[4],[5] However, sulfasalazine-induced lichen planus deserves a separate mention and reporting because sulfasalazine has been concluded as a successful therapeutic option for cutaneous lichen planus, constituting an alternative to corticosteroid and retinoids. [6],[7] The mechanism by which drugs induce a lichenoid tissue reaction are unknown, but they may develop as a result of autoreactive cytotoxic T cell clones directed against a drug class II MHC-antigen complex, such that native keratinocytes and Langerhan′s cells are viewed by the immune system as ′non self′. [2] 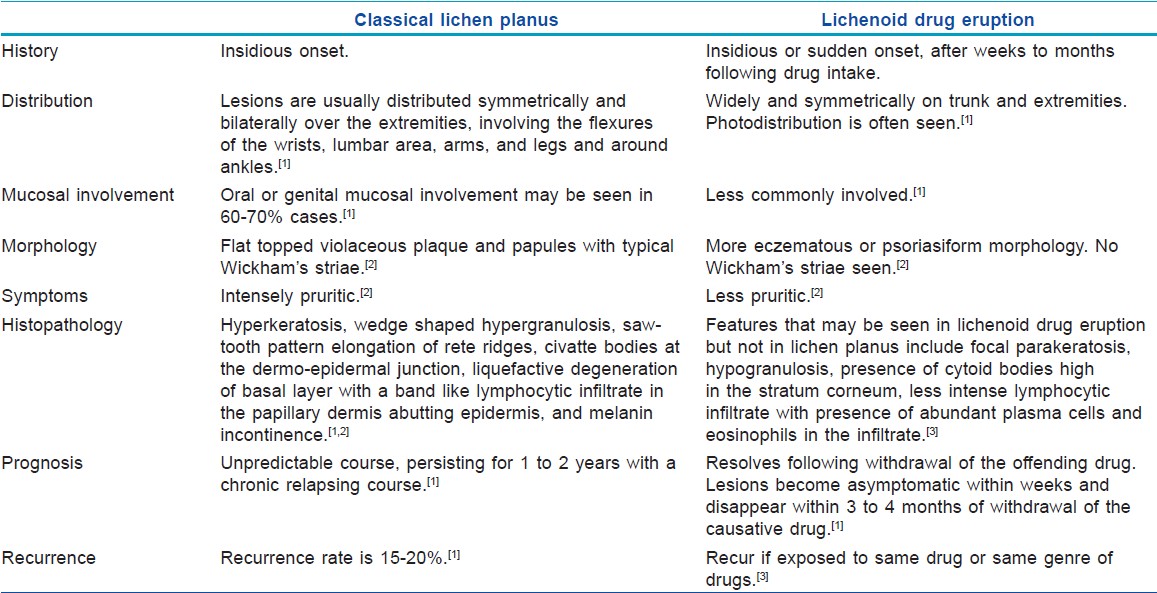 Fifty five-year-old lady, a known case of rheumatoid factor positive rheumatoid arthritis for three years, presented to us with progressively increasing number of moderately itchy pigmented lesions on bilateral forearms, chest, and forehead. Her arthritis was being managed with non steroidal anti-inflammatory drugs (NSAIDs) until three months back, when she was put on sulfasalazine with a dose of 500 mg twice daily. This was done in view of her peptic ulcer disease, which was suspected to be NSAID-induced, and also due to an increased severity of arthritis, which was no longer responding to NSAIDs. She tolerated sulfasalazine well and her arthritis improved within one week of introduction of this drug, but she started to develop itchy pigmented skin lesions on face and limbs over last four weeks. She denied any similar eruptions in past. There was no history of oral ulcers or hair loss or nail changes along with the skin eruption.

On examination, patient had multiple violaceous to hyperpigmented, flat topped, discrete papules and plaques over photo-exposed sites, namely the extensors of bilateral forearms, v-area of chest, upper back, and forehead [Figure - 1] a-d. On oral examination, bilateral buccal mucosa showed irregular hyperpigmented plaques without any ulcerations or white lacy pattern. Nail plates had no abnormalities and there was no involvement of scalp hair follicles. On general examination, patient was otherwise healthy except for typical bony deformities of bilateral hands and feet [Figure - 2] a and b. Large joints clinically appeared normal. Routine blood investigations were all within normal limits. Rheumatoid factor was positive with a titre of 1:32. Erythrocyte sedimentation rate (ESR) was 12 mm in first hour and C- reactive protein was positive. There was no evidence of hyperuricaemia. On the basis of these findings, a provisional diagnosis of drug-induced lichen planus was made and sulfasalazine was withdrawn for this patient. Rheumatology opinion was sought for an alternative medication. Histopathology of a representative skin lesion showed hyperkeratosis, focal parakeratosis, wedge-shaped hypergranulosis, and liquefactive degeneration of basal cell layer with interface dermatitis [Figure - 3]a-c. Patient did not consent for the re-challenge test after being informed about the nature and the method of the test. However, she reported marked improvement in her pruritus and flattening of cutaneous lesions with topical steroid and oral antihistaminics within two weeks following the withdrawal of sulfasalazine. She was followed up for the next two months to monitor recurrence of similar episodes.

Sulfasalazine is a disease-modifying drug used to treat rheumatoid arthritis, psoriatic arthritis, crohn′s disease, ulcerative colitis, etc. Dermatologists prescribe this medicine in psoriatic arthritis and lichen planus. Sulfasalazine is a combination of an aspirin-like anti-inflammatory component and a sulfur antibiotic-like component. It appears to have anti-inflammatory effects and also reduces the activity of immune system. Gastrointestinal side effects like loss of appetite, nausea, and abdominal pain are most common. Though skin rash and oral ulcers are rare, they are known side effects of this drug. [8],[9] But reports of lichen planus as a side effect of this drug are scarce in the literature. [10] The aminosalicylic moiety has been held responsible for inciting LDE in the few reported cases that are assumed to be sulfasalazine induced. [10],[11]

In this case, though the patient also received NSAIDs before starting sulfasalazine, there was a considerable gap of three months after NSAIDs were stopped and before the first cutaneous eruption appeared. Although spontaneous remission could occur in the course of LP and there are a few isolated case reports of idiopathic lichen planus associated with RA; in our patient, the typical photodistribution of the lesions and prompt resolution of LP after withdrawal of the suspected drug, along with lack of recurrence, are arguments in favor of lichenoid drug eruption. [12]