Bullous ichthyosiform erythroderma (BIE) was first described by Brocq in 1902.[1],[2] Ichthyosis bullosa of Siemens is a milder variant of the condition, which is now designated as superficial epidermolytic ichthyosis. It is distinguished clinically from epidermolytic hyperkeratosis by the absence of erythroderma, localization of dark grey hyperkeratosis to the flexures, and areas of peeling of skin; known as the “Mauserung phenomenon”.[3]

An 8-month-old boy, born of non-consanguinous parentage presented to us with generalized thickening of the skin. There was scaling over the trunk, extremities and face, the scales being accentuated over the flexural creases. Besides, some areas showed peeling of normal skin on the slightest pressure. The patient was born with normal, non-erythematous and non-scaly skin. There was no history of a restrictive membrane at birth. From the time the child was two months old, he had generalized erythema and blistering which ruptured easily with eventual thickening of the skin. This was followed by peeling of skin without any underlying erythema, and subsequent clearance. Lesions occurred over the entire skin sparing the palms and soles. The lesions occasionally became pruritic and he would scratch and peel them. After application of emollients, the hyperkeratotic skin would peel away and appear normal but the multiple recurrences prompted the parents to seek medical help.

Cutaneous examination revealed dark grey hyperkeratosis over the trunk, extremities and cheeks. There was no bulla when the child presented to us, however, there was a definite history of blistering. Hyperkeratosis was accentuated over the flexures and axillae, sparing the palms and soles [Figure - 1]a and [Figure - 1]b. Hair, nails, mucosae and teeth were normal. “Mauserung” phenomenon could be elicited and there was peeling of the hyperkeratotic skin with underlying normal skin, in the absence of any erythema [Figure - 2]a and [Figure - 2]b. No one else in the family had a similar illness.

A biopsy from a lesion on the arm showed basket weave hyperkeratosis and thickening of the granular layer with vacuolar degeneration of keratinocytes in the spinous and granular layer. We made a provisional diagnosis of superficial epidermolytic ichthyosis (ichthyosis bullosa of Siemens) and treated the patient with topical emollients. Genetic studies could not be done due to lack of infrastructure and financial constraints.

Mutations in keratin genes are responsible for a wide range of disorders of keratinization. K1 and K10 are present in the suprabasal cells, and K2e is normally expressed in the upper spinous cells and granular cells.[4] Bullous ichthyosiform erythroderma is caused due to mutations involving K1 and K10, whereas ichthyosis bullosa of Siemens occurs due to an underlying mutation in K2e.

Bullous ichthyosiform erythroderma typically presents with fragile skin (epidermolysis), which gives way to progressive hyperkeratosis. A mild, generalized erythroderma is present at birth. Flaccid blisters, peeling and superficial erosions at sites of minor trauma or friction are apparent within the first few hours of life. The superficial erosions heal rapidly without scarring, and easy blistering ceases in the first few months of life. Erythroderma fades away while the characteristic grey, waxy scale evolves. Increasing hyperkeratosis is obvious from early childhood and is most prominent around the anterior neck, flexures, abdominal wall, infragluteal folds and scalp. Yellow-brown, waxy, ridged or corrugated scale builds up in skin creases. The colour of the scales may vary from dark brown to grey or white. The hair, nails and mucosae are usually normal.[2]

In contrast, superficial epidermolytic ichthyosis (ichthyosis bullosa of Siemens) is less severe, often without any abnormalities at birth. It is the result of mutation in the K2e gene located on 12q13.13. Blistering in response to trauma develops in infancy. Hyperkeratosis with dark brown skin is found predominantly over the flexures of limbs. A collarette-like lesion may be found where the uppermost epidermis has been lost, a finding noted in our patient. Superficial peeling of the skin ("Mauserung” phenomenon) is the diagnostic hallmark of superficial epidermolytic ichthyosis.[5],[6] The blistering and peeling generally improve with age. The hyperkeratosis may grow more severe but it remains localized to flexural folds. Rajiv et al. described a 14-year-old boy whose blistering improved with age but the problem of skin peeling increased.[7] Koley et al. presented a case where there was no history or clinical evidence of blistering at the time of presentation.[8] Salient points of difference between bullous ichthyosiform erythroderma and superficial epidermolytic ichthyosis (ichthyosis bullosa of Siemens) have been provided in [Table - 1]. 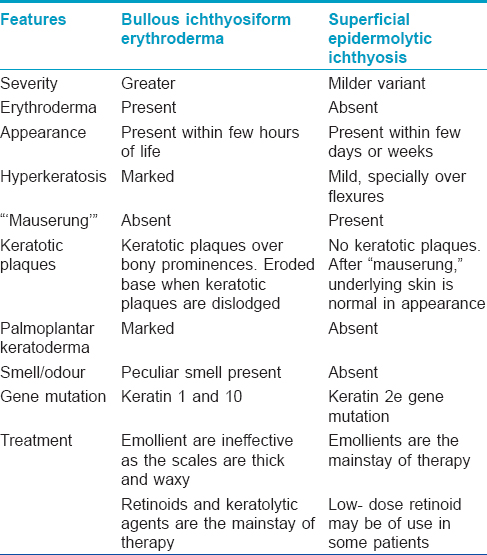 The term “epidermolytic hyperkeratosis” is derived from the characteristic light microscopic observation of intracellular vacuolization, clumping of tonofilaments and formation of small intra-epidermal blisters, commonly seen in ichthyoses as a result of keratin mutations. Therefore the term ''epidermolytic hyperkeratosis” is used (by some) as synonymous with bullous ichthyosis, ichthyosis exfoliativa, bullous congenital ichthyosiform erythroderma (of Brocq), or ichthyosis bullosa of Siemens. To simplify the nomenclature, Vinzenz et al., proposed the novel umbrella term of “keratinopathic ichthyosis” (KPI). They also proposed the novel disease name “superficial epidermolytic ichthyosis'' for the well-defined entity, ichthyosis bullosa of Siemens.[9]

Direct sequencing of PCR products of keratin K2e shows a point mutation in the highly conserved helix termination motif.[2] The diagnosis can be confirmed only by molecular genetic testing but clinical examination helps to differentiate bullous ichthyosiform erythroderma from superficial epidermolytic ichthyosis.[10]

Antibiotics, emollients, mild keratolytic preparations and topical tazarotene [7] are good therapeutic options to offer and these are reliably known to lead to improvement.