Synopsis of Psychodermatology 2011: Conducted by the Department of Dermatology, Kasturba Medical College, Manipal, 6th - 7th May, 2011

An International meeting on ′Psychodermatology′ the first of its kind in India, perhaps in Asia, was conducted by the Department of Dermatology, Kasturba Medical College, Manipal, on 6 th and 7 th May, 2011.

The national and international faculty comprised of Dr. John Koo, an eminent personality in the field of psoriasis and psychodermatology, Director, UCSF Psoriasis Center and Psychodermatology Clinic, University of California; Dr. Tina Bhutani, Senior Research Fellow, University of California; Mrs. Asha Thomas, Walden University, USA; Dr. Piyanjali de Zoysa, Department of Psychological Medicine, University of Colombo; Professor C R Srinivas, Head of Dermatology Department, PSG Medical College, Coimbatore; Dr. Janardhan Reddy, Professor in Psychiatry, NIMHANS, Bangalore, Ravish Tunga Professor and Head of Psychiatry Department, KMC, Mangalore, PSVN Sharma, Professor and Head of Psychiatry Department, KMC, Manipal and many notable others. There were stimulating discussions and interactions on various psychodermatological conditions, psychological aspects of common, but emotionally debilitating diseases like vitiligo, acne, psoriasis, and atopic dermatitis, as also discussions regarding the best therapeutic approach - whether medical, psychological, or a combination of both. A holistic and empathetic approach to such patients, with stress upon their mental well-being and on the need for teaching them various simple although effective psychological interventional processes, such as, Jacobson′s Progressive Muscle Relaxation (JPMR) and cognitive and mindfulness therapy were discussed.

The first day started with a scintillating discussion on the practice of psychodermatology and use of psychopharmaceutical agents by the dermatologists and referral centers in the US, by Dr. John Koo, a pioneer in this field. The diseases were classified into purely psychodermatological and those with underlying psychopathology [Table - 1]. He went on to discuss that many of the common dermatoses had emotional triggers [Table - 2].

Table 1: Classification into purely psychodermatological and those with underlying psychopathology 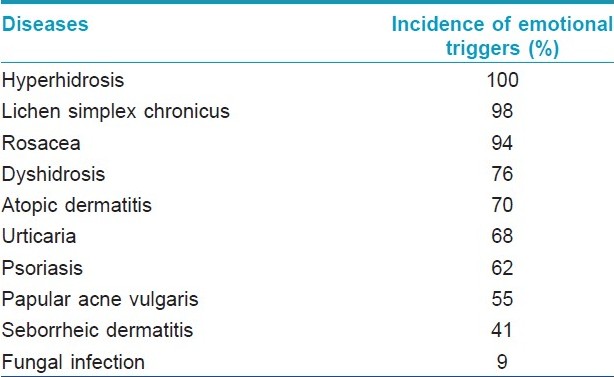 The various psychological aspects of dermatological diseases as well as pure psychodermatological diseases were discussed and the key drugs to be used in each case [Table - 3] and their side effects were elaborated upon. The next session was on the psychological evaluation of a dermatology patient by Dr. PSVN Sharma, which covered many unchartered areas of the patient′s psyche. He said that visibility of the lesions produce major psychological upsets and this distress depends on the personality rather than the disease per se. He divided the talk into subheadings like psychological effects of skin disease [Table - 4], psychocutaneous diseases, [Table - 5], links between skin disease and psychology, evaluation of mental status by a detailed history, taking care that the dermatologist shows confidentiality, empathy, willingness to listen, and understanding, giving realistic advice and further assessment by detailed tests, including rating scales, personality scales, and projective techniques. He also discussed ′stigma′ - a relatively unknown entity to dermatologists, and went on to say that there were various types of stigmas like anticipation of rejection, feeling flawed, sensitivity to other′s opinion, secretiveness, vicarious stigmatization, and stigmatizing the self and tactics to reduce stigma including reducing visibility of the stigmatizing lesion, improving self-image and education, and the attitude change of society. The dermatologists were given an idea of how to approach the mind of the patient, while evaluating his skin. 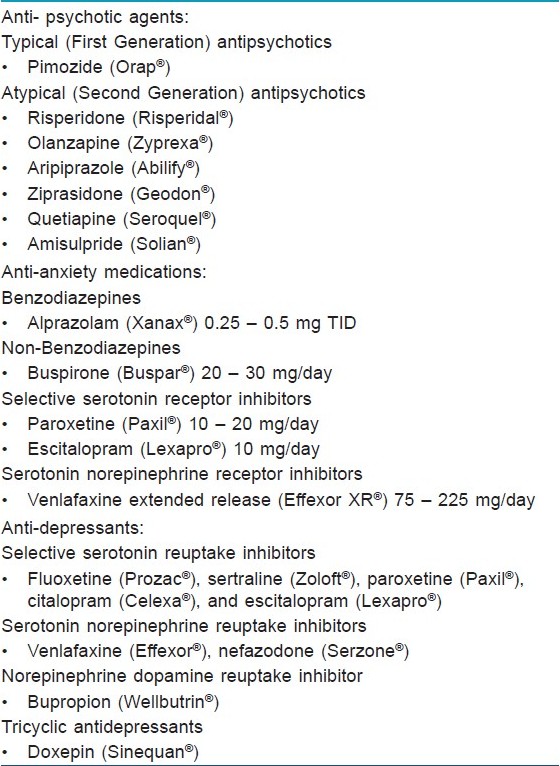 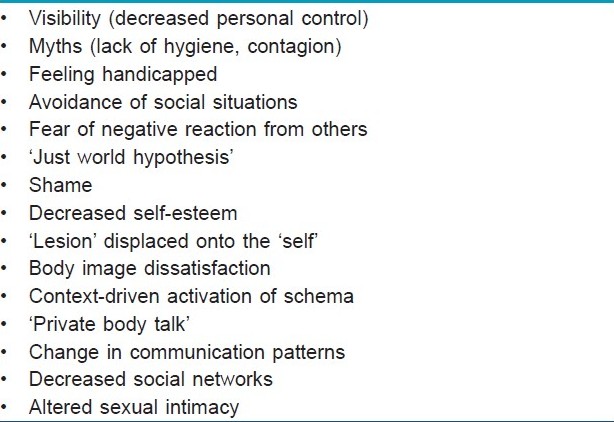 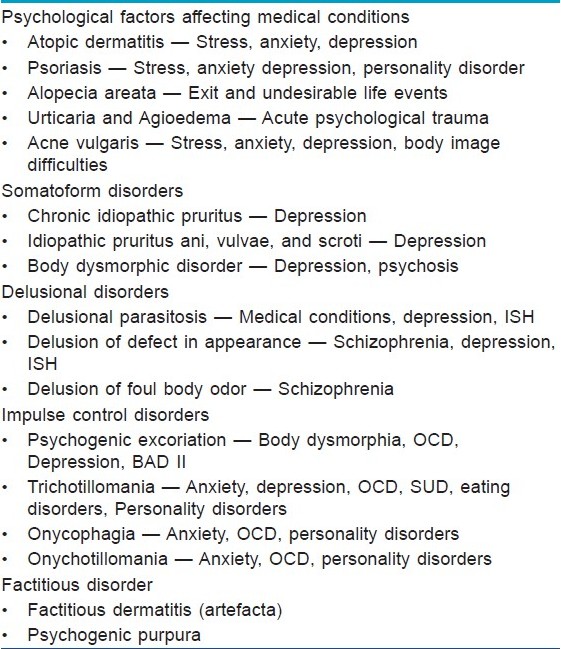 Asha Thomas, a research fellow from Walden University, USA, discoursed upon the connection between mind and skin, as to how these are derived from the same fetal ectoderm. She elaborated on a study consisting of 600 patients who had psoriasis, alopecia, acne, urticaria and vitiligo, their pre- and post-treatment psychological assessment and the scope for improvement in each disease after treatment. Acne and alopecia areata showed significant positive improvement, urticaria moderate, and psoriasis, mild improvement, whereas, the negative symptoms worsened in the case of vitiligo patients. Demonstration of JPMR, which was useful to the patient (as well as the doctor, perhaps) was an interesting part of her talk. JPMR was a group of easy to perform, relaxing, progressive muscle tensing and relaxing exercises, which the patient could perform in the comfort of his home, while relaxing in an easy chair and which had shown efficacy in many disorders.

The next lecture was on ′Psychoneuroimmunology and Skin′ by Dr. Ravish Thunga, Professor and Head of the Department of Psychiatry, KMC, Mangalore, who simplified everything aptly stating, "If brain is the hardware, psyche is the software". The individual is not seen as a collection of systems, but as a whole, without division between the mind and body. There are networks of communication that exist between the brain and the neurological, endocrine, and immune systems. Communication systems between mind and skin include hypothalamic-pituitary-adrenal (HPA), sympathetic nervous system, noradrenergic innervated immune systems, and cytokines, which can induce symptoms of illness.

A scintillating symposium on ′Holistic approach to psoriasis′ followed next. The speakers from US stressed upon the advantage of older and cheaper remedies like the Goeckerman therapy using crude coal tar and UV light over more expensive options like the biological ones; they also stated that group therapy with Goeckerman regime helped the patients in other ways too - mingling of patients led to a feeling of social acceptance and a positive approach, leading to improvement in the quality of life. This was followed by a panel discussion on all topics, touching upon psoriasis and psychodermatology. Various views were expounded and explained. Dermatologists, Psychologists, and Psychiatrists were exposed to each others′ view points. Many questions were asked, answered, and debated upon.

Dr. Tina Bhutani, the chief author of the handbook on psoriasis, ′Contemporary diagnosis and management of psoriasis,′ elaborated on the various new and innovative measures in the treatment of psoriasis, like targeted therapy and biologicals, with stress upon etanercept, infliximab, adalimumab, and trials with the newer ustekinumab and briakinumab; and the major safety issues to be considered when initiating treatment with those. She also talked on the targeted excimer supraerythemogenic laser phototherapy, which required only eight to ten sittings, thus proving superior to the traditional suberythemogenic and erythemogenic types, but stated that she found the age old and tested Goeckerman′s regime the best, followed by phototherapy. She also touched upon the ever strengthening link between psoriasis, the metabolic syndrome, and myocardial infarction.

The second day started off with a discussion by Dr. John Koo and Dr. Tina Bhutani about a few of their interesting cases of delusions of parasitosis. Dr. Koo stressed upon the need to sympathize and empathize with the patient and to slowly introduce them to antipsychotics. His five-phase step-by-step approach includes pre-visit preparation, establishing therapeutic rapport, a detailed history and physical examination, to rule out other obscure causes, slow initiation of therapy, and the most important of all, maintenance of the therapy.

Obsessive compulsive disorders and their implications on the skin were talked about by Dr. Janardhan Reddy, Professor in the Department of Psychiatry, NIMHANS, Bangalore. We got a good understanding of this disease and also clues on when to suspect that a dermatological patient may be suffering from the disease of the psyche too. After a short tea break, Dr. Koo continued on his talk on Psychodermatology and Psychopharmacology, which imprinted in our minds the treatments of various commonly seen pyschodermatological diseases.

Dr. Koo gave a short, but succinct lecture on the interpersonal aspects of psoriasis management; how as doctors, we should take care of compliance and adherence to treatment, and also do a little ′cheerleading′ to keep up the patients′ spirits. He stressed upon patient education and forming a therapeutic alliance with the patient.

Dr. Tina Bhutani revived our interest in the Goeckerman therapy. She opined that even in comparison to cyclosporine, biologics, and psoralen plus ultraviolet A (PUVA), the modern ′ultra′ Goekcerman therapy is the most effective, the fastest, and the safest treatment regime, which gives the longest average remission [Table - 6]. She also touched upon the holistic practice in their daycare centre where all patients undergoing the regime stay together in a room with plastic occlusion for 3-4 hours, sharing thoughts and experiences and undergoing relaxation therapy via soothing music and other exercises.

Finally, the eagerly awaited highlight of the session: ′Psychological interventions in Dermatology′ by Dr. Piyanjali de Zoysa from the Department of Psychological Medicine, University of Colombo, Sri Lanka, commenced. She expounded upon the various psychological interventions like cognitive therapy and mindfulness meditation. She divided the psychodermatological process into two broad groups - the first group of diseases did not require any major psychological interventions and could be managed by an empathic dermatologist, and the second group required a change in the psychological setup of the patient, wherein, more deeper sessions by well-trained practitioners was required. Mindfulness meditation was a new term to many of the audience. It was the essence of Buddhist meditation (Vipassana), wherein a person was taught to acknowledge and accept his thoughts as and when they entered his mind. Its goal was spiritual enlightment, and psychological well-being was just a ′side effect′. This therapy needed specially trained personnel and the patient also had to be well motivated.

Five posters were put up. The first poster portrayed two cases of psychogenic excoriations resulting in disfiguration. It urged us to ′look beyond the skin′ for a cause and treatment, as it was commonly associated with at least one comorbid psychiatric diagnosis, rendering multimodal treatment a necessity. The second and third posters were on studies of the quality of life in alopecia areata and chronic urticaria, respectively. The fourth was a case report on psychological intervention in chronic urticaria, which included eliciting and working upon the various cognitive errors experienced by the patient. Assertiveness training, social skill training, and anger management were carried out on the patient. The final poster depicted personality profiles of select dermatology patients, including urticaria, alopecia areata, and psoriasis, which suggested predominantly introvert, sensitive, apprehensive, tense, and analytical personalities with anankastic and anxious-avoidant traits.

The meeting adjourned after a productive one and a half days, with a promise of exploring many such gray areas in the practice of dermatology in future.