Background: Targeted phototherapy is a new form of phototherapy which has many advantages and disadvantages over conventional phototherapy. This article reviews the different technologies and outlines recommendations based on current evidence. Methods: A literature search was performed on targeted phototherapy to collect data. Relevant literature published till March 2014 was obtained from PubMed, EMBASE, and the Cochrane Library. Keywords like “targeted phototherapy”, “excimer laser”, “excimer lamp”, “Nonchromatic ultraviolet light”, “vitiligo”, and “psoriasis”, were used for literature search. All systematic reviews, meta-analysis, national guidelines, randomized controlled trials (RCT), prospective open label studies and retrospective case series in English were reviewed. Results: Three hundred and forty studies were evaluated, 24 of which fulfilled the criteria for inclusion in the guidelines. Conclusions and Recommendations: All forms of targeted phototherapy are useful in vitiligo. Good responses were seen in localized involvement, resistant lesions and in children in whom their use is more accepted and convenient (Level of evidence 2+, Grade of recommendation B). Similarly it is useful in psoriasis, either alone or in combination with drugs, even in resistant forms such as palmoplantar psoriasis. In view of expense and practical application, their use is limited to resistant lesions and localized disease. (Level of evidence 2+, Grade of recommendation B). But in other conditions there is no convincing evidence for its use. (Level of evidence 3+, Grade of recommendation C).
Keywords: Guidelines, psoriasis, targeted phototherapy, vitiligo

Targeted phototherapy (also called concentrated phototherapy, focused phototherapy and microphototherapy) is a new form of phototherapy which seeks to overcome some of the disadvantages with conventional phototherapy.[1],[2],[3],[4] This modality involves application of light energy directly focused on or targeted at the lesion through special delivery mechanisms such as fiberoptic cables. The term “targeted phototherapy” includes different technologies such as excimer laser (308 nm), intense pulse light systems and non-laser ultraviolet light sources with improved hand-held delivery systems.

Several advantages have been claimed for targeted phototherapy:[3],[5]

However, targeted phototherapy devices have certain disadvantages. They are more expensive. Furthermore, they are not adequate to treat extensive areas given the cost of treatment and time involved. They are not recommended for use if lesions occur over more than 10% of the body area.

Different technologies can deliver targeted phototherapy and these include:

The advantages of the light sources over excimer laser include smaller size, lesser maintenance problems and lower cost. Some machines also include the ultraviolet A spectrum and this is an added advantage. [Table - 1] shows the various indications and contraindications of targeted phototherapy.[6],[7] 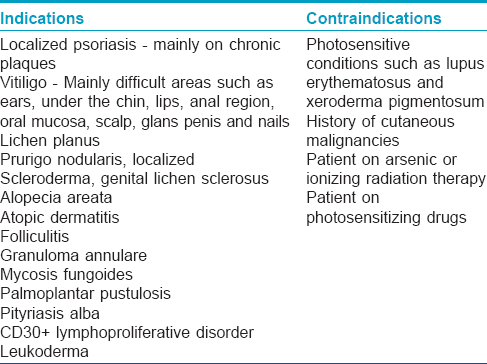 Relevant literature published until March 2014 was obtained from PubMed, EMBASE and the Cochrane Library. Keywords such as “targeted phototherapy,” “excimer laser,” “excimer lamp,” “non-chromatic ultraviolet light,” “vitiligo” and “psoriasis” were used for literature search. All systematic reviews, meta-analysis, national guidelines, randomized controlled trials, prospective open-label studies and retrospective case series in English were reviewed. The levels of evidence and grades of recommendations for each guideline were according to the format suggested by the British Association of Dermatologists. The studies selected were assessed for their methodology as per the NICE Technical Manual and graded using a code “++,” “+” or '”−,” based on the extent to which potential biases were minimized. Thereafter, the grade of recommendation was made.

Three hundred and forty studies were evaluated, 24 of which fulfilled the criteria for inclusion in the guidelines.

Low fluencies (50–200 mJ/cm 2) were used in vitiligo compared to psoriasis. An initial dose of 200 mJ (150 mJ for women and men under 16 years of age) was used by Shi et al.[8] The subsequent dose was determined as follows: dose increased 20% from treatment 1 to 10, 10% from treatment 11 to 13, 5% from treatment 14 to 16 and 2% from treatment 17 to 20 sessions. If symptomatic erythema or blistering developed, one or two treatments were withheld until resolution of phototoxicity; when treatment was resumed, the dose was reduced to the last well-tolerated dose. Sessions were performed once, twice or 3 times a week. Although administering treatments more frequently (i.e. 2 or 3/week) appears to trigger earlier repigmentation of vitiligo patches, the start of repigmentation appears to depend ultimately on the total number of laser treatment sessions.[9]

Several studies have demonstrated the efficacy of excimer laser in vitiligo. A pilot study in 2002 showed significant benefits among vitiligo patients in 29 patches of vitiligo from 18 patients. Twenty three vitiligo patches from 12 patients received at least 6 treatments and resulted in some repigmentation in 57% of the treated patches. Eleven vitiligo patches from 6 patients received 12 treatments and resulted in some repigmentation in 82% of the treated patches, with parameters 120 ns, 20 Hz pulse with a 10 mm × 10 mm spot size and a power output of 60 mW of laser light. The study concluded that “the degree of repigmentation in a period of 2–4 weeks is much higher than that achieved with any other present vitiligo therapy”. The xenon chloride excimer laser may represent a new treatment modality for the management of stable vitiligo.[4] These results were confirmed by other studies which showed benefit with excimer laser in patients of localized vitiligo that had been unsuccessfully treated with other modalities of treatment.[10] A large study of 140 patients with vitiligo treated by excimer laser showed excellent results in ultraviolet-sensitive areas while ultraviolet-resistant areas such as acral lesions and lesions on joint areas responded poorly.[11] However, these and other studies were small studies in some patients and uncontrolled.[12] A meta-analysis comprising seven randomized controlled studies with 390 vitiligo patients showed no significant differences between 308-nm excimer laser and 308-nm excimer lamp when evaluating either ≥75% or ≥50% repigmentation rate, or between 308-nm excimer laser and narrowband ultraviolet B on either 100% or ≥75% repigmentation rate. However, more lesions achieved ≥50% repigmentation when treated with 308-nm excimer laser than with narrowband ultraviolet B (level of evidence 1+).[13]

Several studies have been published which demonstrate the efficacy of excimer light (intense pulsed light). In a pilot study of excimer light in 37 patients of vitiligo, Leone et al. obtained initial repigmentation in the first eight treatments and excellent repigmentation in 50% of patients at 6 months.[14] Some patients who had not previously responded to narrow band ultraviolet B therapy were also found to respond. The results were comparable to excimer laser and superior to narrowband phototherapy. Studies have suggested that combination with topical immunomodulators and fluticasone could enhance the clinical response in vitiligo, especially in more resistant anatomical sites and in segmental vitiligo (level of evidence 1+).[15],[16],[17]

Several non-coherent light sources have been shown to be effective in vitiligo.[18],[19] A study by Akar et al. in 32 patients using Daavlin T500x high-dose targeted phototherapy system showed that therapeutic effectiveness is limited and depends on the locations of vitiligo lesions. In this study, only 4 (12.5%) of 32 patients showed visible repigmentation. All the lesions responsive to treatment were facial lesions.[20] Welsh et al. too demonstrated that extremities did not respond satisfactorily.[21] In a prospective intra-patient placebo-controlled randomized trial, 20% of the lesions treated with narrowband ultraviolet B achieved repigmentation scores above 50% but none of the lesions treated with monochromatic excimer light achieved a repigmentation higher than 50% after 24 sessions (level of evidence 1+).[22] In a similar multicenter controlled study comparing 308-nm monochromatic excimer light and narrowband ultraviolet B phototherapy, results with 308-nm monochromatic excimer light were superior (level of evidence 1+).[23]

Summary of recommendations in vitiligo

Evidence suggests that all forms of targeted phototherapy are useful in vitiligo. They can be used in combination with other drugs. However, response is limited to hairy areas and acral, resistant areas are resistant to these new and expensive treatment modalities, too. Hence, these devices may be used in localized areas, in resistant lesions and in children in whom their use is more acceptable and convenient (grade of recommendation B).

In psoriasis, the efficacy of excimer laser has been confirmed by several reports.[11],[28],[29] Localized resistant lesions of psoriasis on elbow and knees were reported to be cleared in as few as 1–3 exposures with moderately long remissions.[28] Scalp psoriasis was also shown to respond well.[3] In another study which evaluated patient satisfaction, 55% of patients reported overall satisfaction and 25% reported that laser treatments were better than any other treatment they had tried.[30] Side effects reported, though usually mild, included burning pain during and after treatment, severe erythema and blistering of the skin.

After a period of initial excitement, subsequent studies have led to a reappraisal of the role of excimer laser in psoriasis.[31],[32] Comparison of excimer laser, excimer lamp and 311-nm narrowband ultraviolet B in patients with psoriasis showed similar clearance and no statistically significant difference in results after 10 weeks of treatment.[31] The study did show enhanced clearance in the group of patients treated with the excimer laser when they were treated using an accelerated scheme of administration but these patients also had a higher rate of side effects such as blistering and crusting. The study concluded that “the only advantage of laser seems to be the ability to treat exclusively the affected skin and with a reduced cumulative dose, thus perhaps reducing the long term risk of carcinogenicity.” This experience has been confirmed in another similar study.[33] A study evaluated seven published reports on the use of excimer laser and concluded that there is no consensus for a single excimer laser therapy protocol and as a result, patient preferences should continue to be an important consideration for phototherapy regimen planning (level of evidence 1+).[34]

Non-laser light sources have proven popular because of their small size and lower costs. Some studies have demonstrated the safety and efficacy of these machines in psoriasis. Both ultraviolet B (narrowband and broadband) and ultraviolet A therapies, alone and in combination with drugs such as calcipotriol and dithranol have been shown to be effective (level of evidence 2+).[35],[36],[37],[38],[39],[40],[41],[42]

All forms of targeted phototherapy are useful in psoriasis, either alone or in combination with drugs, even in resistant forms such as palmoplantar psoriasis. Given expense and practical application, their use is limited to resistant lesions and localized disease (grade of recommendation B).

Excimer laser has been reported to be effective in other dermatoses also such as oral lichen planus, alopecia areata, atopic dermatitis, mycosis fungoides and lymphomatoid papulosis.[43],[44],[45],[46] Interestingly, excimer laser has been found to be effective in hypopigmented striae, hypopigmented scars, acne vulgaris and other diseases and conditions generally considered difficult to treat.[47],[48],[49],[50],[51] Increase in melanin pigment, hypertrophy of melanocytes and an increase in melanocytes within striae leading to darkening of striae were reported after use of excimer laser.[52] These results, if confirmed by larger studies, will open up exciting new avenues for the treatment of these important and common cosmetic problems.

Most of these studies are isolated reports in a small number of cases. Hence, the therapy needs to be used after a careful consideration of cost and benefit (grade of recommendation C).

Targeted phototherapy is an exciting new technology in the management of several dermatological conditions. Their main advantages are safety, ease of administration and suitability for difficult to treat areas and in children. There is no conclusive evidence that they are superior to existing technologies and are also more expensive. Hence, their use may be undertaken in selected cases as outlined.