Targeted ultraviolet B phototherapy in vitiligo: A comparison between once-weekly and twice-weekly treatment regimens

Vitiligo is one of the most common acquired disorders of skin pigmentation, that affects about 1% of the world population. The disease causes tremendous psychological trauma, especially in people with coloured skin.[1],[2] Treatment of vitiligo is done on two fronts: to control the progress of the disease and to achieve repigmentation in lesions that have already developed. Phototherapy is one of the best known and documented treatment options in vitiligo.[3],[4] Originating with the use of crude psoralens and sun exposure, phototherapy in vitiligo has advanced to psoralens with ultraviolet A, narrowband ultraviolet B, and its combination with topical treatment options, and finally targeted phototherapy with lasers and ultraviolet light.[4],[5],[6],[7],[8] Among the treatment options currently available in vitiligo, targeted phototherapy is one of the most effective, especially in patients with localized vitiligo.[9],[10] As the term denotes, targeted phototherapy specifically targets the lesional skin, while the rest of the skin remains unexposed. As a result, the uninvolved skin remains protected and the lesional skin can be exposed to higher energies, enabling a rapid therapeutic effect.[9],[11] In addition, the adverse effects of whole body irradiation are avoided.

This study was conducted in 60 patients with stable non-segmental vitiligo over the face, neck and trunk, involving less than 5% of the total body surface area. For the purpose of the present study, stable vitiligo was defined as vitiligo showing no further spread or spontaneous repigmentation over a 3-month period. The patients were selected from the outpatient department of our institute (Cutis Skin Institute, Srinagar, Kashmir) and the study was conducted from February 2013 to January 2014. Informed consent was obtained from every enrolled patient prior to the start of the study. Patients with photosensitive disorders, history of intake of immunosuppressant or immunomodulator drugs, and patients who had received any other form of phototherapy in the past were excluded from the study. Pregnant patients and those with segmental or acrofacial vitiligo were also excluded. All the patients had Fitzpatrick skin type 3 or 4.

The patients were divided into two groups of 30 each, based on their ability to come for twice or once weekly targeted ultraviolet B treatment. Those who were ready to come for twice-weekly treatment were included in group A, whereas those reluctant or unable to come twice a week were included in group B. Lesions present on the face, neck and trunk were selected for targeted ultraviolet B phototherapy in both these groups. Lesions on the limbs or acral areas were excluded.

All patients were treated with a targeted phototherapy device named Levia R Professional targeted ultraviolet B device (Lerner Medical Devices Inc., USA). The device uses a short arc metal halide lamp with a filter to produce narrowband ultraviolet B light (300-320 nm) with a peak at 314 nm. The output of narrowband ultraviolet B delivered by the machine is in the range of 100−120 mW/cm 2 and the individual dose that the machine can provide ranges from 5 to 800 mJ/cm 2 with possible increments of 5 mJ/cm 2. A stencil is provided with the device to treat vitiligo lesions of different shapes and sizes.

In both groups, the initial dose of targeted ultraviolet B was 200 mJ/cm 2 and the energy was increased by 50 mJ/cm 2 after every dose until a faint erythema or perifollicular pigmentation was noticed. The same dose was continued until the patient continued to show mild erythema or perifollicular pigmentation. In case of blistering or painful erythema, treatment was stopped for a week and the dose was reduced by 50 mJ/cm 2 from the last dose received. No topical or oral drugs were used in any of the groups during the study period. Targeted narrowband ultraviolet B was continued until the patients continued to show pigmentation or for a maximum of 30 sessions.

The primary outcome measure monitored was the extent of repigmentation achieved. This was calculated separately for each body site (face, neck and trunk). This was then compared between the two groups. In addition, the number of doses needed for repigmentation to start, the cumulative dose of targeted ultraviolet B administered as well as the number of doses required to achieve complete repigmentation for each body site were also compared. Adverse events that were monitored included painful erythema, blistering, koebnerization, extension of lesions and any other adverse reaction. The chi-square test was used to assess the statistical significance of the results and a P value of < 0.05 was considered as statistically significant. 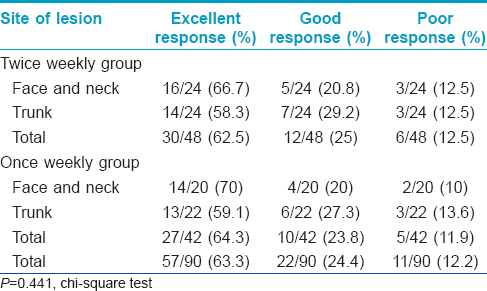 Table 1: Comparison of the repigmentation achieved in the twice weekly and once weekly treatment groups 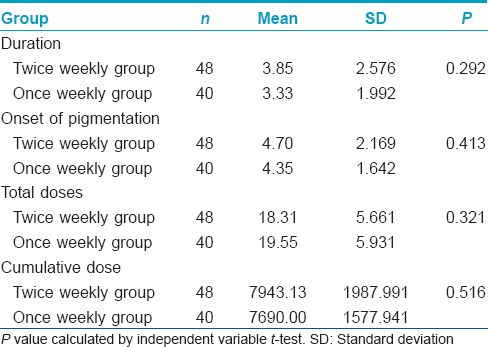 Table 2: Comparison of other variables in the two treatment groups

In most of the clinical studies on targeted phototherapy, either twice-weekly or thrice-weekly treatment regimens have been used. A twice-weekly treatment schedule has been most commonly followed, whether it is excimer laser, targeted broadband ultraviolet B or narrowband ultraviolet B.,[13],[14],[15],[16],[17],[18] There are only a few clinical studies which have employed a different dosage schedule or compared different dosage frequencies with targeted phototherapy devices in vitiligo.

A study by Hofer et al. in 2005 commented on the efficacy of different dosage schedules of targeted phototherapy with excimer laser in vitiligo. They found almost similar results with once weekly, twice weekly and thrice weekly light exposures. They observed that repigmentation started earlier in patients who were treated with twice or thrice weekly excimer laser treatment, compared to those who received treatment once weekly. The ultimate extent of repigmentation was almost similar in all the groups. They concluded that the ultimate repigmentation achieved seemed to depend entirely on the total number of treatments, and not their frequency.[23]

Another related study by Shen et al. from China reported similar observations with four different dosage schedules of excimer laser treatment. The patients in this study were treated with excimer laser on face and neck vitiligo at 0.5, 1, 2 and 3 exposures per week.[24] The final repigmentation achieved was almost similar in patients treated with 1, 2 or 3 exposures every week while those receiving 0.5 doses (one dose every two weeks) could not achieve the same level of repigmentation. Repigmentation occurred fastest with twice and thrice weekly exposures but the final repigmentation achieved was the same as that with once weekly treatment.[24]

We are not aware of any such comparison studies between different dosage frequencies by targeted ultraviolet B devices. However, there is a clinical study that has reported a successful outcome in vitiligo with a targeted ultraviolet B device, where treatment was delivered once every two weeks. This study reported >75% repigmentation in 69.5% of 734 patients treated over 12 months. Of the 734 patients treated, 112 (15.3%) patients achieved complete repigmentation of the treated lesions.[19] The device used in this study (Bioskin) provides targeted narrowband ultraviolet B with the emission spectrum of 300−320 nm peaking at 311 nm.

Practically, whenever targeted phototherapy is considered in any patient suffering from vitiligo, the most important factor that affects this choice is the ability of the patient to comply with a twice or thrice weekly treatment schedule. If given a choice, most patients would favour an option that interferes the least with their daily life. Visiting a phototherapy clinic twice or thrice a week for months together is a difficult proposition for most patients. This is the primary reason for the limited use of targeted phototherapy in vitiligo. Most of the patients are not able to get the benefit of this rapidly acting therapeutic modality.

We studied vitiligo lesions on the face, neck and trunk as these are the sites where targeted ultraviolet B is most effective. Acral lesions and segmental vitiligo were excluded as they are considered to be relatively resistant to this treatment. We were able to achieve excellent results in 63.3% of the treated lesions, which is a figure consistent with almost all studies conducted on targeted ultraviolet B in vitiligo. Lesions on the face and neck responded better with 68.8% lesions showing excellent results collectively in both the twice weekly and once weekly treatment groups.

We feel that compliance to treatment can be greatly improved if a once weekly treatment schedule is followed in targeted ultraviolet B therapy. The results show that therapeutic efficacy is not compromised. If the choice of once weekly treatment schedule is offered to vitiligo patients, it is likely many more would be willing to opt for targeted phototherapy, including targeted ultraviolet B therapy.