The effects of normobaric oxygen therapy on patients with periorbital darkening: An open, uncontrolled trial

Periorbital darkening is a condition with a complex etiology, including dermal melanosis, post-inflammatory hemodynamic congestion and skin laxity. Therefore a combination treatment approach has been suggested. [1] We found no previous reports of the use of oxygen in the treatment of periorbital darkening.

Thirty-five patients complaining of periorbital darkening, attending the dermatology outpatient clinic at Kasr Al ainy hospital, Cairo University, were included in this study. The study was approved by the institutional dermatology research ethical committee. Detailed personal and medical history of patients was obtained.

Before treatment, patients were graded clinically for pigmentation as mild, moderate and severe, for presence or absence of textural changes and dermoscopically for the different dermoscopic patterns of pigmentation, and presence or absence of erythema and telangiectasia. Details of the clinical, demographic and dermoscopic manifestations of periorbital darkening have been previously described and serve as ′pretreatment′. [2]

Oxygen was administered via a nasal cannula at a rate of 1 litre/min, for 1 hour twice weekly for 3 weeks. Multiple clinical and dermoscopic photographs of the periorbital area were obtained before and after therapy.

Following treatment, evaluation of the pre- and post-treatment clinical and dermoscopic photographs of patients was made by two independent observers. Clinical improvement including color lightening and/or reduction in the size of the affected area were assessed using a per patient relative improvement score that was graded such that a difference of 0 was recorded as no change, up to 25% as fair, >25-50% as good, >50-75% as very good and >75% as excellent. Dermoscopic evaluation included change in erythema and/or telangiectasia (when present) using the following grading system: decreased, increased and no change.

A final evaluation of the periorbital area was performed by three independent evaluators (one additional evaluator was external to the study), and an average overall improvement score was obtained. Inter- evaluator agreement was assessed using kappa test for agreement which ranged between a minimum of 0 and a maximum of 1. A final score (an average of the three evaluators′ assessment) was computed. Patients were subdivided into three groups accordingly:

The major clinical changes following treatment included lightening of the color and/or reduction in the size of the darkened area [Figure - 1]a and b and decrease in intensity of pigmentation and erythema and/or telangiectasia on dermoscopy [Figure - 2]a and b [Table - 1]. An average score of improvement (1.7) for all patients, compared to baseline 0.1 (approximately 0) was statistically significant (P= < 0.001). According to this score, 6 (17.1%) patients showed no change (group A); 19 (54.3%) patients showed up to 50% improvement (group B); and 10 (28.6%) patients showed >50% improvement (group C). Interestingly, all six patients with skin phototype III showed improvement; marked in four and moderate in two. We may therefore presume that periorbital darkening in fair skinned individuals is more favorably responsive to oxygen therapy. 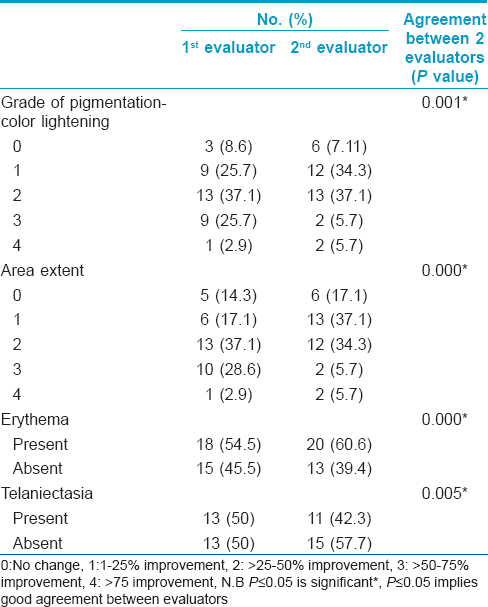 Pre-treatment dermoscopic evaluation of patients revealed that 33 (94.3%) of patients showed erythema and 26 (74.3%) patients showed telangiectasia. Post-treatment evaluation showed that improvement of erythema and telangiectasia took place in 22 (66.7%) and 15 (57.7%) patients, respectively. Oxygen significantly improves tissue oxygenation despite vasoconstriction. [3] This could explain improvement of patients through affection of the vascular component of periorbital darkening.

Healing of stasis ulcers, with regeneration of peri-ulcer skin following intra-ulcer application of hemoglobin and inhaled normobaric oxygen has been previously reported. [4] This was attributed to the anti-inflammatory effect of oxygen, [4] and promotion of oxygen-dependent collagen matrix formation. [5] This might explain the overall improvement of our patients, along with improvement of skin texture ([Figure - 1]b). All patients received no treatment except for normobaric oxygen, 4 weeks prior to the study indicating that the changes observed may perhaps be attributable to normobaric oxygen. Lack of a control arm is a major limitation of this study.