The enigma of lamivudine rash: Experience on re-challenge from an anti retroviral treatment center in South India

Although combination anti retroviral treatment is highly effective in patients infected with the human immunodeficiency virus (HIV), adverse drug reactions pose major challenges. Cutaneous drug reactions are more common (10%–15%) in people infected with HIV and may vary from mild itching to life-threatening adverse reactions like Stevens–Johnson syndrome. Among the anti-retrovirals, adverse drug reactions are most commonly associated with nevirapine and rarely, other anti-retroviral drugs such as zidovudine and lamivudine. The exact incidence of rash following the ingestion of these drugs is difficult to estimate, as they are administered in fixed dose combinations.

If a patient develops rash following an initial regimen, it is presumed to be due to nevirapine. National AIDS Control Organization guidelines recommend replacing nevirapine with efavirenz if the rash is mild, and with a boosted protease inhibitor if the rash is severe. Such decisions are usually taken at the state level expert committee (State AIDS Clinical Expert Panel).[1] Rarely, when a patient develops rash even to these alternative regimens containing protease inhibitors, lamivudine may be implicated as the cause of the rash, as it is included in all regimens. There have been two case series reported from India on rash following lamivudine during anti retroviral treatment.[2],[3]

Of the 9923 patients initiated on anti retroviral treatment in Kerala, South India, during the past 12 years, 78 were referred to the anti-retroviral treatment center at Thrissur (which functions as a State AIDS Clinical Expert Panel center for the state), for the management of grade 3 or 4 rash with nevirapine and efavirenz. We report our experience on identification of the probable causative drug and subsequent management in seven patients who continued to have rash, even on the alternative regimen. The selection and sequencing of individual drugs for rechallenge were performed on a case to case basis, and also depending on the availability of the individual formulation and the clinical situation. Two patients required hospitalization, while a few of them made arrangements to stay near hospital. We used the World Health Organization Uppsala Montoring Centre criteria (1991) to relate the causality.[4] Rechallenge was attempted for a patient who presented with Stevens–Johnson syndrome also, with her informed consent, as she was deteriorating without anti retroviral treatment and could not afford any other drugs outside the program [Table - 1]. 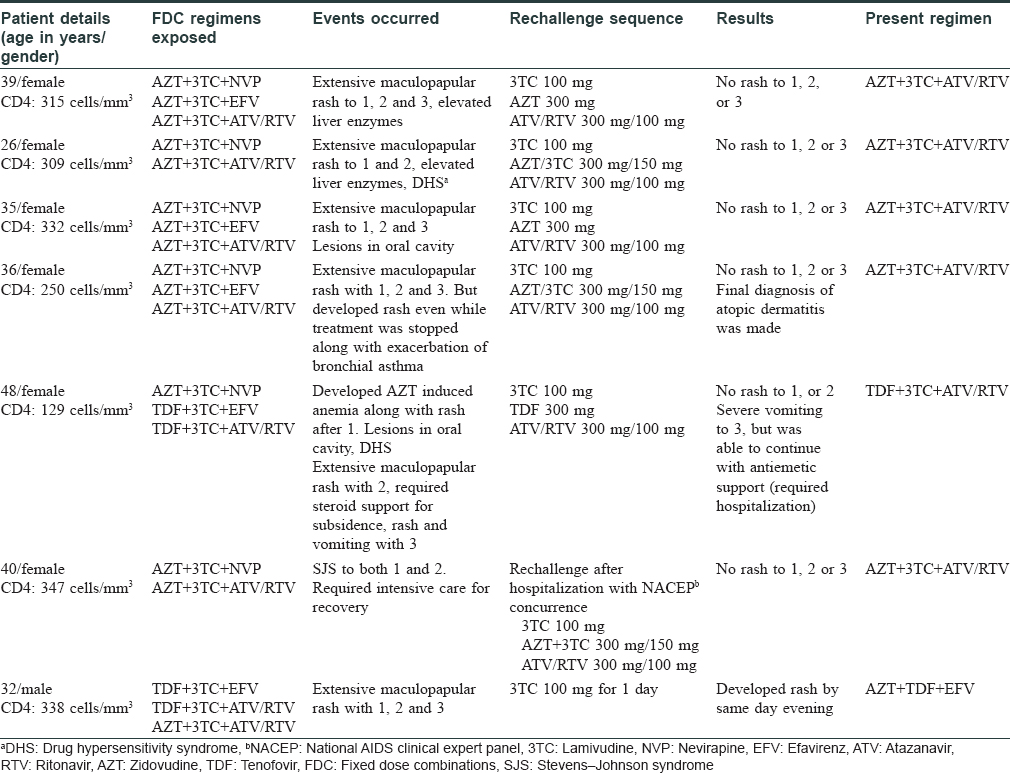 On rechallenge with individual drugs, one person developed rash to lamivudine (certain, as per the World Health Organization Uppsala Montoring Centre criteria). Thus, out of the total 9923 patients receiving lamivudine-containing regimen in Kerala, true sensitivity was established in only one patient (incidence of 1/10,000).

The technical resource group of National AIDS Control Organization recommends a 10 days' trial of zidovudine/tenofovir + lamivudine, for drug rash due to anti-retroviral treatment and a re-challenge monotherapy with zidovudine/tenofovir. Observing the presence or absence of rash to zidovudine/tenofovir, the offending agent is identified. Due to the low genetic barrier, lamivudine is not recommended as a single drug and the causality of rash is established as a diagnosis of exclusion, especially with regard to lamivudine. However, we had to re-challenge with lamivudine alone as a desperate measure since zidovudine was not available as a single drug neither in the program or outside.

Rash, occurring in the background of human immunodeficiency virus infection is a complex clinical scenario. Close temporal proximity of rash to drug ingestion does not exclude other possibilities such as viral fever with rash, secondary syphilis, eosinophilic folliculitis, exaggerated insect bite reactions, immune reconstitution and relapse of dermatitis like atopic and seborrheic dermatitis.[5] Re-challenges are not routinely carried out for fear of inducing resistance or severe adverse drug reactions. Our experience suggests that a careful clinical evaluation can rule out some causes of rash like atopic dermatitis (as in case 4). Re-evaluation of the clinical situation and a stepwise reintroduction which also served as re-challenge turned out to be fruitful in our patients.

Looking back, though our patients developed rash repeatedly with fixed dose combinations, it failed to occur on re-challenge with individual drugs and lamivudine was exonerated as the cause in the majority. It is also possible that some of them got desensitised to the offending drug due to repeated exposures. Considering the overall outcome and apparent benefits, we would like to propose the following re-challenge plan in recurrent drug rash during anti-retroviral treatment initiation [Flow Chart 1]. 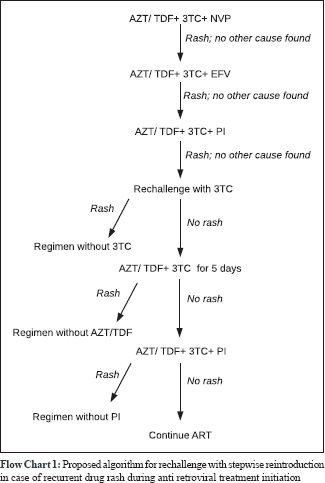