The exemplary life of Dr. J. W. Aurangabadkar: A humble and humane dermatologist 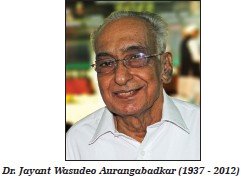 For over four and a half decades his name was and still is synonymous with Dermatology in Hyderabad. Jayant Wasudeo Aurangabadkar was born on 18 th March 1937 at Solapur, Maharashtra, India. After school and college education, he joined MBBS course in Kasturba Medical College, Mangalore, and completed the course in 1961. In those days when everyone was craving to become a surgeon or physician with MS or MD qualification, he opted to become a dermatologist when the specialty was at its infancy. He joined JJ Hospital, Mumbai and obtained diploma in dermatology and venereology from the College of Physicians and Surgeons in 1963. He worked as registrar at GT Hospital, Mumbai and passed diploma in venereology and dermatology from Bombay University in1965. He then moved to Andhra Pradesh against all odds (on the advice of his mentor dermatologist and leprologist Dr. SJ Yawalkar and cardiologist friend Dr. Tulpule, Mumbai). He joined as a tutor in Skin and Venereal Disease (VD) Department at Kakatiya Medical College, Warangal. He started his private practice in 1966 as a consultant dermatologist, which was unheard of at that time in this part of the country and became a pioneer in this regard.

When private practice was banned for government employed doctors, he was forced to quit government service and opted for consultancy service as a skin, VD, and leprosy specialist at Hyderabad in the year 1968. For nearly a decade, he commuted up and down by public transport between Warangal and Hyderabad. In those days in Hyderabad, even when VD specialists were feeling shy to write as VD specialists, he put his sign board as skin, VD, and leprosy specialist, least afraid of the taboo.

Being a Maharashtrian, he did not know the local language Telugu, but soon he learnt and became proficient in it. Because of his efforts, he could educate the public about our specialty through the interaction with media, especially newspapers. With his ethical practice, ever smiling face, and healing touch, no wonder he became the most famous skin, VD, and leprosy specialist drawing patients from far and wide. People would sleep on the foot path in front of his house at night to get a token in the early morning. So confident of his diagnosis, he rarely advised investigations. Like his old time contemporaries, the only aid was a magnifying lens. He gracefully used to refer difficult cases to the seniors and more qualified personnel′s.

He was a founder member and the first life member of Indian Association of Dermatologists, Venereologists and Leprologists (IADVL), Andhra Pradesh with a membership no. LM/AP/001. He was a life member of Indian Medical Association city center branch. He regularly used to attend meetings, conferences of IADVL, both state and national. He did yeomen service to IADVL AP branch but never aspired for any posts like president or secretary, etc. However, for using his good offices through the then Health Minister late Sri. Madan Mohan, the annual conference of IADVL in 1982 at Hyderabad would not have been such a great success.

At a relatively young age, he authored two chapters on dermatology and venereology in the Association of Physicians India Textbook of Medicine and in a book on Leprosy by his mentor Dr. S.J. Yawalkar. Although, not attached to any teaching hospital, he was a consultant dermato-venereologist to eight reputed hospitals, some of them charitable with purely honorary service. On Saturdays, he used to give free consultation and donate medical samples to Sai Baba Temple Trust, Hyderabad for the benefit of the poor.

He was a committee member of and trustee of Vivek Vardhini Educational Society, and member of Maharashtra Mandal in Hyderabad. His love for our specialty was rewarded as his son Dr. Sanjeev and daughter in law, Dr. Madhavi both opted to be dermatologists. He attended to his patients until his admission into the hospital.

Dr. J.W. Aurangabadkar will be remembered as a gentleman par excellence. Such persons are few and far between in this world. He had his last breath on 10-11-2012 at Hyderabad after a brief illness. He is survived by his wife, two sons Rajeev and Sanjeev and a daughter Dr. Jyoti. May His Soul rest in Peace!