White superficial onychomycosis is a relatively uncommon type of onychomycosis where the fungus invades the superficial layers of the dorsal nail plate. The fungal colonies appear as white or yellow opacities on the nail plate surface producing “pseudo-leukonychia.” The clinical diagnosis is often missed and the dermoscopic features are not well-described due to paucity of such cases.[1]

A 38-year-old man presented with yellowish-white discoloration of all toenails for the past 1 year [Figure - 1]. On examination, the toenails had a friable looking nail plate surface with no evidence of subungual hyperkeratosis and periungual inflammation. Fingernails were spared. The rest of the mucocutaneous examination was noncontributory.

Similarly, a 20-year-old woman presented with whitish discoloration of all toenails for the past 8 months. In this case also toenails appeared to have a friable nail plate surface with no signs of periungual inflammation.

Both cases were diagnosed clinically as white superficial onychomycosis, and onychoscopy was performed as the first step of assessment in both cases. We used a contact handheld dermatoscope (Dermlite DL4-3Gen; 10×; polarizing) and a universal serial bus dermatoscope (Dinolite AM7115MZT; 20–220×; polarizing) for the assessment. The purpose of using a universal serial bus dermatoscope was to observe any additional features at higher magnification (150×). Onychoscopy showed yellowish-white, opaque and friable debris on the nail plate, which was concentrated proximally [Figure - 2]. The appearance can be likened to “chickpea flour” sprayed on the nail unit (can be seen sometimes in housewives working with flour). On higher magnification (150×), these patches appeared to be composed of linear striae, progressing from the proximal to the distal end of the nail plate [Figure - 3]. In between, these patches showed a unique grid pattern within as well as between adjacent patches [Figure - 4]. Other features included nail plate discoloration, onychoschizia, loss of cuticle and inflamed nail folds. A 10% potassium hydroxide examination and histopathology [Figure - 5] confirmed the fungal etiology in both cases.

Onychoscopy has greatly improved the diagnostic armamentarium of dermatologists in diagnosing nail pathologies.[2],[3],[4],[5] Onychomycosis, especially the distal lateral subungual onychomycosis, has been extensively studied with onychoscopy. [Table - 1] shows the onychoscopic features of various types of onychomycosis. There is a paucity of literature for the uncommon forms such as endonyx and white superficial onychomycosis.[5],[6] Onychoscopy of the nail plate in the latter shows several small white or yellow opaque and friable patches.[5] Both cases in this report showed features similar to the previous report. In addition, we also noticed the proximal concentration of these friable patches, possibly due to the higher concentration of fungal elements near the nail folds and henceforth, the greater damage to the nail plate at this location. Higher magnification with the universal serial bus dermatoscope offered the visualization of a unique “grid pattern” within these friable patches. This grid pattern probably represents the macroview of the pattern of proliferation of fungal colonies on the nail plate surface. The most common differential diagnosis for the friable and brittle nail in such cases is nail lichen planus. Onychoscopy in nail lichen planus has been reported to show onychorrhexis, onychoschizia, pitting, chromonychia, pterygium, erythematous lunula, nail bed dyschromia, splinter hemorrhage and subungual hyperkeratosis.[7] Both onychopathies show typical onychoscopic features. Onychoscopy as the first step in diagnosis can help reduce the need for a biopsy. 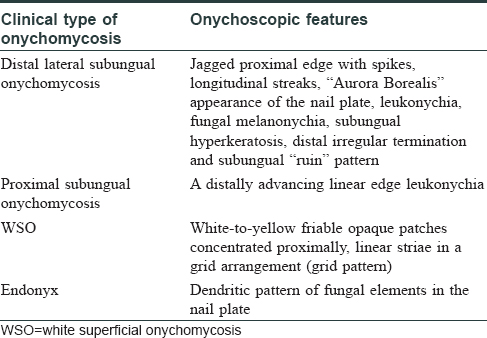 Table 1: Various clinical types of onychomycosis and their onychoscopic features

In conclusion, a proximally concentrated yellowish white-colored friable, opaque debris on the nail plate and grid pattern of linear striae is a useful diagnostic clue for white superficial onychomycosis.