Background: Dermoscopy is a useful method that allows dermal and epidermal structures to be easily analysed non-invasively. Aim: In this study, immersion oil, which is widely used in dermoscopy, and ultrasound gel, which is less preferred, are evaluated comparatively in terms of displaying structural parameters and number of air bubbles in the image. Methods: A total of 71 nevomelanocytic or non-melanocytic pigmented lesions were taken up for this study. Structural characteristics of the obtained images were assessed by an experienced observer who scored the images in terms of color, pigment network, globule, vascular structure, number of air bubbles and other pigmentation parameters. Results: In the images obtained through immersion oil or ultrasound gel from all of the lesions, no statistical difference was found between the average values of air bubbles and in the evaluation of structural components (t=1.09, P=0.2). In the identification of pigment network in melanocytic lesions, immersion oil was observed to be more appropriate than ultrasound gel (t=0.01, P=0.02). Conclusions: Ultrasound gel may be preferred in the assessment of mucosa and nail bed lesions. Ultrasound gel is a good alternative compared to immersion oil in pigmented skin lesions as it is cheap and easily removable.
Keywords: Dermoscopy, dermatoscopy, immersion, liquids, techniques

Dermoscopy is a non-invasive, simple and cheap technique allowing identification of structures that cannot be seen with the naked eye. It has provided a better understanding for the morphology of pigmented skin lesions. The first-hand dermatoscope was developed in 1989 by Stolz and Braun-Falco. [1] In recent years, dermoscopy has witnessed a rapid technological change. As a result, new, practical and useful digital dermatoscopes have been developed and the data obtained can be easily stored in a computer environment. [2],[3]

In dermoscopic examinations, many physicians generally prefer immersion oil. The use of immersion oil seems to be the unchangeable part of dermoscopy. Nevertheless, the use of numerous immersion liquids has been reported in the literature. [1],[4],[5],[6],[7],[8],[9],[10] Immersion liquids can be divided into four groups: (i) water-based gels, (ii) oils, (iii) disinfectant solutions and (iv) water. The properties expected from an ideal immersion liquid can be summarized as being easily procurable, making structural parameters of the lesion visible well, not changing color, being cheap, containing less air bubbles, not being too quickly volatile, being usable in special locations like circumocular mucosa and not leading to very matte or excessive bright image.

In this study, whichever method is convenient for the identification of some specific structural parameters in the diagnosis of the images obtained from nevomelanocytic non-melanocytic pigmented lesions by using immersion oil and ultrasound gel has been analysed.

A total of 71 pigmented lesions from 31 cases, 17 of which were males and 14 females who applied to Istanbul University, Cerrahpasa Faculty of Medicine, Department of Dermatology, Polyclinic of Pigmented Lesions and Tumour, from the year 2002 to 2005, were taken. Verbal informed consent was obtained from all the participants. Scalar video microscope was used as a digital dermascope and Grimed software 1.2 program was used for the patient follow-up. Images were recorded in the computer with Geforce MX 4000, 128 MB graphics card, 512 RAM speed and analysed on 17" Likon screen (1024×768 resolution, 32 bits color). Scalar CCD cameras help the lesions of size 0.56 cm 2 to be obtained at 310.000 pixel quality by autofocusing with six LED lights at fixed 30× amplitude and the data obtained through USB cable is recorded in the computer by means of Grimed software 1.2. By the virtue of this program, general details of the patients, lesion settlement areas, diagnoses, treatment and follow-up stages can be easily recorded.

In our study, whether various immersion liquids affect the structural analyses of skin lesions in different structures and in some special settlement was analysed and a minimum of 12 digital images were taken for each lesion. Six of these taken images were obtained by using immersion oil and other six were obtained by using an ultrasound gel. Immersion oil was applied onto the pigment, which was to be analysed with the help of dermatoscope in a manner that would completely cover the lesion and spread sensitively from the center of the lesion toward the periphery. Since the ultrasound gel is more viscous, it was applied onto the lesion with a spatula-like plastic stick and again spread sensitively from the centre of the lesion toward the periphery with the help of the dermatoscope. After the dermatoscope was placed at an angle of 90° to the skin in all lesions, immersion liquid was spread to the periphery with circular movements until whole of the glass surface would contact with the skin. Both immersion liquids were used in the manner that would cover the entire lesion. The images obtained were examined by a blind experienced observer. From a minimum of six images taken for every case, the image of each immersion liquid was decreased to one, with each image containing the same details by the same observer. These images were stored in the software program. In selection of the image, the ones that had one of the pigmented skin lesions grouped into the following were considered: nevomelanocyctic nevus, malignant melanoma (MM), basal cell carcinoma, lentigo, blue nevus, vascular lesions, palmoplantar pigmented lesions and pigmented lesions in nail bed. Diagnosis of the lesions was carried out by the differential diagnosis algorithm of skin lesions. [1] All lesions that were suspicious for malignancy were excised and recorded together with their histopathological results.

In the images that belong to the lesion diagnosis group, which was determined and which was analysed by both immersion oil and ultrasound gel, differences in the below-specified characteristics were assessed. Digital photo shoots taken from all cases were scored according to the following criteria:

The data obtained at the end of the study is summarized in [Table - 1]. In [Figure - 1],[Figure - 2],[Figure - 3],[Figure - 4], sample pictures (one each) taken with immersion oil and ultrasound gel for each group are presented. 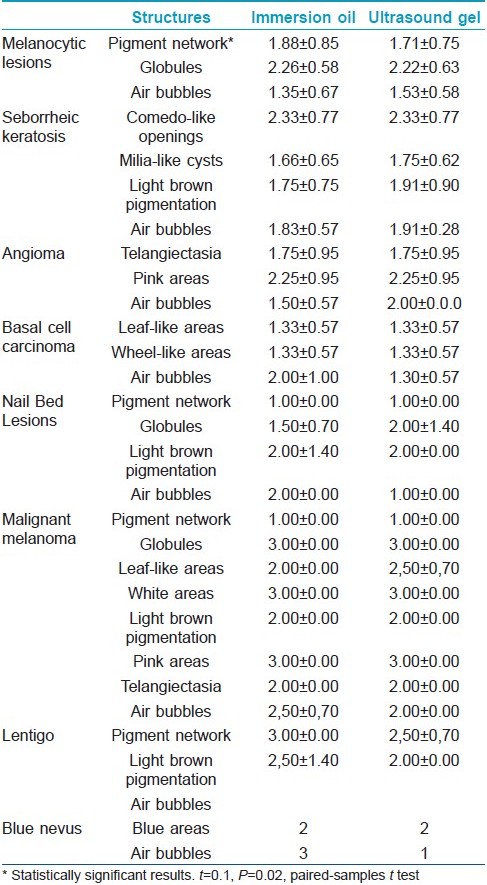 Table 1: Average values of structural analysis criteria and number of air bubbles in the images obtained by using immersion oil and ultrasound gel in groups enrolled in our study

In recent years, in many regions of the world, especially in people with light skin color, an apparent increase has been seen in the incidence of MM. [1] Dermatologists can diagnose MM correctly in 65-80% of the cases on clinical observation. [11] The correct diagnosis of MM increases by 10-27% with the use of dermatoscope. [12],[13],[14]

The prognosis of MM is directly associated with observing the lesions in the early stages and with the depth of the lesions. [3] With the use of dermoscopy, unnecessary excision of benign melanocytic lesions can be prevented. Undoubtedly, both an invasive intervention and an additional treatment cost are important issues. [15] There is also an apparent increase at the malign/benign rate in pigmented skin lesions sent for excision with the use of dermoscopy. This prevents the unnecessary excisions.

Gewirtzman et al., [8] in a study performed on immersion liquids and dermoscopy technique, graded the definition of lesion image and the number of air bubbles in the images they obtained by using water, 1% clorhexidine, alcoholic disinfectant, ethanol, isopropanol, liquid paraffin, ultrasound gel and assessed the results. From their study, it was concluded that the best image was obtained after placing the dermatoscope to the skin with an angle of 90° by means of spreading the immersion liquid to the periphery with circular movements until the whole glass surface would contact with the skin. It was reported that the best immersion liquid in terms of number of air bubbles and image definition were the disinfectant solutions and the ultrasound gel provided the best image for the assessment of pigmented lesions in some special locations such as mucosa and nail as they are non-viscous. [8]

In this study, immersion oil and ultrasound gel were used comparatively in dermatoscopic analysis of melanocytic and non-melanocytic formations containing different structural components. Gewirtzman et al. [8] excluded immersion oil from work probably because of its side effects. [7] These side-effects have not been reported in the literature until the time of our study. Although melanocytic lesions of only 10 patients were analysed in terms of definition in the study of Gewirtzman et al., [8] they were not evaluated individually in terms of structural parameters. And in our study, 71 pigmented lesions were selected from different diagnosis groups and different settlement regions. In our study, the best dermatoscope-using technique recommended by Gewirtzman et al.[8] was used.

Among 71 pigmented skin lesions, the ones that were suspicious for malignancy and aypia were excised and the results were recorded. Furthermore, some benign lesions causing discomfort were also excised. When the observer was asked to establish a diagnosis for the lesional photographs he or she examined, the rate of establishing correct diagnosis was found to be 97%.

The data obtained at the end of study was statistically assessed by using paired samples ′t′-test. The average values of air bubbles in all of 71 lesions were found not to be statistically different in the images that were obtained by immersion oil or ultrasound gel.

When the pigment net in 45 melanocytic lesions settled on face or any region of the body was assessed, immersion oil was found to be statistically superior than ultrasound gel in terms of structural components being selectable. In the assessment of globules, no statistically significant difference was found between ultrasound gel and immersion oil.

In the assessment of 12 seborrheic keratosis, milia-like cysts, comedo-like openings and light brown pigmentation, no statistically significant difference was found between ultrasound gel and immersion oil.

In two nail-bed-settled melanocytic lesions, two mucosa-settled angiomas and one blue nevus, better results were obtained with ultrasound gel. It was concluded on the basis of our study that ultrasound gel provided better results in special locations such as mucosa and nail. This result is in parallel with the results obtained by Gewirtzman et al. [8]

In this study, the image content of melanocytic and non-melanocytic skin-, nail- and mucosa-settled lesions were evaluated in terms of color and structural components. The literature contains no studies performed previously for this evaluation. Gewirtzman et al. [8] assessed the general definition of the image and did not enter into details about the image content. When the results were evaluated in terms of diagnoses, ultrasound gel or immersion oil was found to be no different in establishing the correct diagnosis. The diagnosis by the observer was found to be correct in 97% of the cases. In lesions that were not compatible with the histopathological diagnosis, the diagnoses established using both analysing liquids were found to be no different from each other. Additionally, Kelly et al. reported that alcohol-based gel presented the same quality of image definition with immersion oil. [16]

In the identification of pigment network, which is an important parameter for the diagnosis of melanocytic lesions, immersion oil was observed to be more appropriate than ultrasound gel. In the identification of structural components other than the pigment network, it was observed that the images obtained with ultrasound gel or immersion oil were not different from each other. Ultrasound gel may be preferred during dermatoscopic examination in special locations such as mucosa, nail bed, genital region and eyelid. In dermatoscopic examination of pigmented skin lesions, ultrasound gel is a better alternative than immersion oil because it is cheap and easily removable from the skin.