The strawberry tongue: What, how and where?

Morphological alteration of the dorsum of the tongue is seen in many disorders. These include alteration in color such as pallor and redness and surface alterations, giving rise to “balding,” “geographic tongue,” and the “strawberry tongue.” Iron deficiency anemia and vitamin B12/folic acid deficiency are the causes of balding/pallor and hyperemia (beefy red glossitis), respectively. Geographic tongue refers to a “map-like” appearance of the tongue seen in a host of disorders such as psoriasis and Reiter's disease. Strawberry tongue refers to the characteristic appearance of the tongue seen in certain disorders where it resembles the skin of a strawberry.

Anatomy of the Dorsum of the Tongue

The dorsal surface of the tongue is divided into anterior two-third and posterior one-third by the sulcus terminalis (a V-shaped groove). The anterior part of the dorsal surface of the tongue is covered by the filiform papillae which have a keratinizing epithelium that confer an abrasive texture. Interspersed between the filiform papillae are the red, mushroom-shaped fungiform papillae covered by nonkeratinizing epithelium and possessing taste buds on their surface. Eight to twelve large circumvallate papillae are situated anterior to the sulcus terminalis, each surrounded by a groove into which the ducts of minor salivary glands open. Taste buds are present on the walls of these grooves. The foliate papillae are seen as parallel ridges alternating with deep groves situated on the lateral surface of the tongue. The walls of these papillae have taste buds.[1]

What Is Strawberry Tongue?

Strawberry tongue (or raspberry tongue) is a distinctive enanthem of the dorsum of the tongue characterized by the prominence of inflamed and hypertrophic fungiform papillae together with hyperemia. While it is a diagnostic feature of disorders such as Kawasaki disease and scarlet fever (see below), it can also be seen in various other conditions [Table - 1] when it serves as a useful diagnostic indicator.[2] 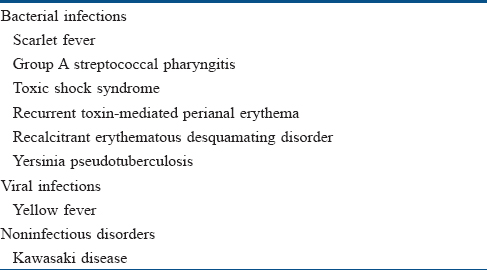 How Does a Strawberry Tongue Develop?

The topographic alteration leading to strawberry appearance of the tongue is possibly the desquamation of the keratinized epithelium of the filiform papillae. This gives a red denuded appearance to the surface that is interspersed with persistent, inflamed and hypertrophic fungiform papillae (seeds of strawberry). In certain conditions such as scarlet fever, the prominent papillae are initially covered by a white coating giving a “white strawberry” appearance to the tongue [Figure - 1]. This coating desquamates in a few days giving rise to the typical “red strawberry” tongue.[3] The term “strawberry tongue” used further in this article implies a red strawberry tongue.

Where All Do We See the Strawberry Tongue?

Most disorders exhibiting strawberry tongue are bacterial toxin-mediated disorders. The bacterial toxins act as superantigens and provoke a nonspecific polyclonal immune cell activation and massive release of inflammatory mediators. Consequently, most of these are multisystem disorders. However, certain other conditions are also associated with this unique morphological alteration [Table - 1].

Scarlet fever is an acute febrile exanthematous illness associated with group A streptococcal pharyngitis mediated by an erythrogenic toxin that produces cutaneous vasodilatation. The initial manifestations include an exudative tonsillitis accompanied by a white strawberry tongue which loses its coating in the next 1–2 days giving rise to the red strawberry tongue [Figure - 2]. The pharyngeal symptoms are followed in a couple of days by a papular exanthem that spreads cephalocaudally. The exanthem confers a typical rough and abrasive texture to the skin [Figure - 3] and is accentuated at the flexures. The rash resolves with desquamation along with palmoplantar peeling in approximately 2 weeks. The various mucocutaneous manifestations of scarlet fever have characteristic eponymous descriptions, as outlined in [Table - 2].[4],[5],[6],[7],[8],[9],[10] The disease, although usually uncomplicated, may develop toxin-mediated complications such as myocarditis, complications such as arthritis, osteomyelitis, hepatitis and/or meningitis caused by direct invasion of the tissues by the bacteria, as well as immunological complications such as rheumatic fever and/or glomerulonephritis. A raised antistreptolysin O titre is common and treatment mainly involves administration of penicillins.[4],[5] 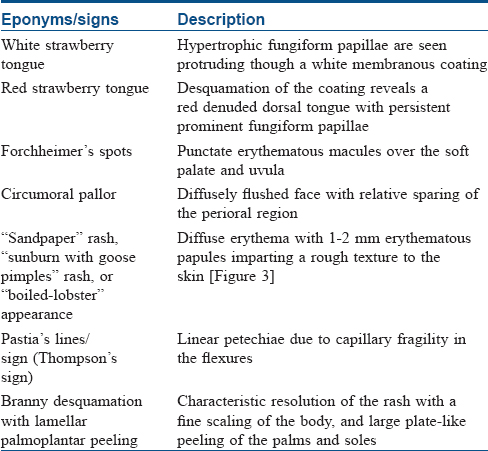 Group A streptococcal pharyngitis may also demonstrate a strawberry tongue which is accompanied by membranous tonsillitis with anterior cervical lymphadenitis and petechial lesions on the soft palate, posterior pharynx and uvula.[6] 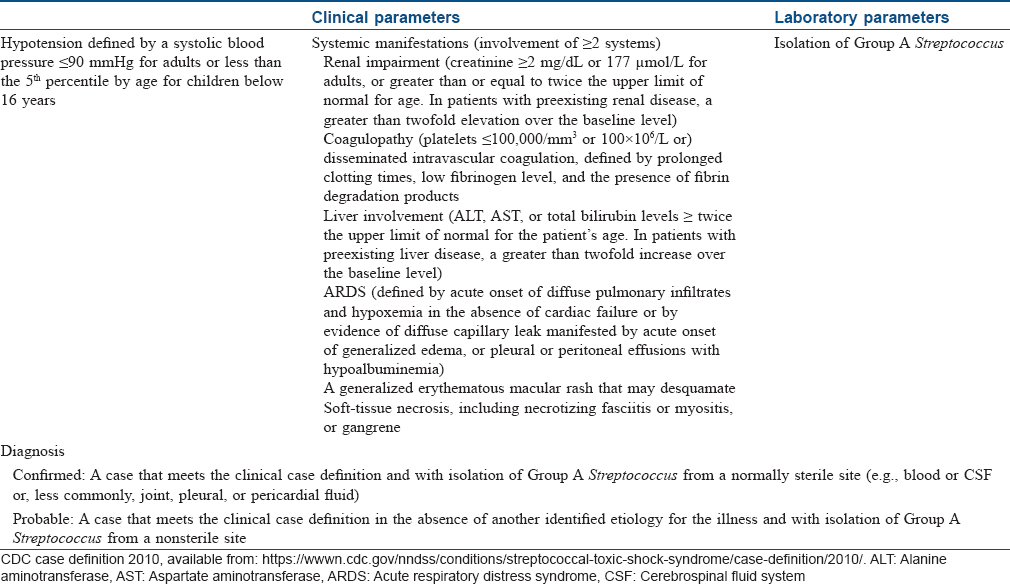 Recurrent toxin-mediated perianal erythema is a benign self-limiting disorder affecting the mucocutaneous structures. It is caused by superantigenic toxins of Staphyloccccus and/or Streptococcus, commonly affecting young adults. Initial manifestations include mild fever, strawberry tongue and erythema of the hands with desquamation. This is followed in a couple of days by perianal erysipelas-like erythema that resolves with desquamation. In a series of 11 cases, strawberry tongue was evident in 7 cases and group A β-hemolytic Streptococcus was isolated in all the cases (from the throat in 10 cases, and from the perianal lesion in 1 case). Though the course of the disease is usually self-limiting, recurrences are not uncommon. Perianal erythema and desquamation are also observed in other toxin-mediated bacterial diseases, such as toxic shock syndrome and scarlet fever, and is also a typical feature of Kawasaki disease (see below). However, these are multisystem disorders and differ significantly from recurrent toxin-mediated perianal erythema in terms of prognosis.[4],[14]

Recalcitrant erythematous desquamating disorder is another staphylococcal toxin-mediated disorder mediated by toxic shock syndrome toxin 1 or enterotoxins A or B. Clinically, recalcitrant erythematous desquamating disorder is characterized by fever, hypotension and a macular erythema with desquamation. Other manifestations include ocular and oral hyperemia and strawberry tongue. The disorder is similar to toxic shock syndrome but fulfils only a few of the diagnostic criteria. However, it differs from toxic shock syndrome in having a prolonged but less fulminant course, being recurrent and being frequently associated with HIV/AIDS when the mortality associated with the disease may be higher. Cases unassociated with HIV/AIDS have also been described. Treatment includes supportive measures and specific anti-staphylococcal antibiotics.[11],[15],[16]

Yersinia pseudotuberculosis is primarily a zoonosis that may be acquired by humans as a food-borne infection. The most common clinical manifestations include fever with leucocytosis and lower quadrant abdominal pain (pseudoappendicitis) with mesenteric lymphadenitis. The infection is usually localized and self-limiting although a septicemic form is seen in the presence of predisposing factors such as diabetes mellitus, chronic liver disease and hemochromatosis. The Far-Eastern scarlatinoid fever associated with strains in eastern Russia presents as a scarlet fever-like illness in children, mediated by a superantigenic toxin (Y. pseudotuberculosis mitogen). It is characterized by an erythematous rash involving the head and neck region and the extremities associated with mucous membrane enanthem and strawberry tongue. A clinical form resembling Kawasaki disease (see below) with fever of 1–2 days duration, strawberry tongue, pharyngeal hyperaemia, a scarlatiniform rash, inflamed and fissured tongue, conjunctival injection, sterile pyuria, periungual desquamation and thrombocytosis has also been described.[17],[18],[19]

Yellow fever is an arthropod-borne viral hemorrhagic fever caused by the yellow fever virus of the genus Flavivirus. The disease has a characteristic triphasic course with an initial prodrome lasting for 1–2 days characterized by a nonspecific febrile illness with headache, malaise, lassitude and lumbosacral pain. This phase mimics a host of other febrile illnesses but certain signs such as hyperemia of the head and neck, conjunctival injection, a strawberry tongue and a high fever accompanied by marked bradycardia (Faget's sign) may point towards the disease, especially in the endemic regions.[20] The redness affecting the tongue may be limited to the tip and sides alone.[21] This phase is followed by a brief period of remission before the third phase ensues which is characterized by hepatic, renal and hemorrhagic manifestations.[22]

Kawasaki disease is an acute febrile multisystem idiopathic systemic vasculitis of childhood, commonly affecting the age group between 3 months and 8 years. The exact etiology of the disease is unknown although a viral infectious and a bacterial superantigenic roles have been implicated based on certain characteristics of the disease such as focal outbreaks, seasonal peaks in winter and spring and clinical features of exanthem, enanthem, conjunctival congestion and lymphadenopathy. Profound immunological activation involving both T and B lymphocytes and elevated proinflammatory cytokines mediate the disorder.[3],[23],[24] The clinical course of Kawasaki disease can be divided into three successive phases. The initial acute febrile phase (lasting for up to 2 weeks) is characterized by prolonged unremitting fever unresponsive to antibiotics, bilateral bulbar conjunctival injection that is typically nonexudative and sparing the limbal region, dry fissured lips, hyperemia of the pharynx, strawberry tongue [Figure - 4], unilateral (usually single) nonsuppurative cervical lymphadenopathy, edema of the hands and feet and an exanthem which may be macular, maculopapular, scarlatiniform, or erythema multiforme-like. Perianal erythema and desquamation [Figure - 5] is also seen in the acute phase. Cardiac involvement in the form of myocarditis and pericarditis with effusion can also occur in the acute phase. The second (subacute) phase lasts for approximately 3 weeks and is characterized by periungual desquamation which may extend to involve the entire hands [Figure - 6] and feet, thrombocytosis and coronary artery aneurysm (developing in 25% of untreated cases). The third (convalescence) phase is characterized by remission of all the clinical signs with persistently elevated erythrocyte sedimentation rate which takes approximately 6–8 weeks to normalize.[25] Diagnosis of Kawasaki disease is based on the criteria laid down by the American Heart Association as there is no specific investigation for the diagnosis.[26] Treatment involves administration of high-dose aspirin with intravenous immunoglobulin (2 g/kg single infusion over 10 hours).[5]

Other conditions where “strawberry” is used eponymously

Although unrelated to this article, we would like to conclude with a list of other dermatological disorders wherein the characteristic clinical manifestations are described using the eponym “strawberry” [Table - 5].[27],[28],[29],[30],[31],[32],[33]

Table 5: Other conditions where “strawberry” is used eponymously

The authors certify that they have obtained all appropriate patient consent forms. In the form, the legal guardian has given his consent for images and other clinical information to be reported in the journal. The guardian understands that name and initial will not be published and due efforts will be made to conceal patient identity, but anonymity cannot be guaranteed.