Morphoea is known to be associated with an increased incidence of autoimmune disorders and auto antibodies, so the coexistence of other autoimmune diseases is expected. [1] The association of thyroid dysfunction in morphoea has not yet been established and only a few studies and case reports are available in the literature. [2],[3],[4],[5],[6] This was the basis for our study to look for thyroid dysfunction in patients suffering from morphoea.

In this study, all histopathologically confirmed cases of morphoea were evaluated for thyroid dysfunction by history, clinical examination, and thyroid function tests. The normal range for TSH, T3 and T4 were taken as 0.30-5.5 μIU/mL, 60-200 ng/dL, and 4.5-12 μg/dL respectively. Anti-thyroid peroxidase (anti-TPO) antibody testing and thyroid gland ultrasonography (USG) was done in a few patients with clinical features of thyroid dysfunction. If a patient had a TSH level of more than 5.5 μIU/mL, with no signs or symptoms of hypothyroidism, it was considered as subclinical hypothyroidism. Anti-TPO antibody testing was not done in all cases of subclinical hypothyroidism due to resource limitation. Fine needle aspiration cytology (FNAC) was done in patients with visible or palpable thyroid swelling. 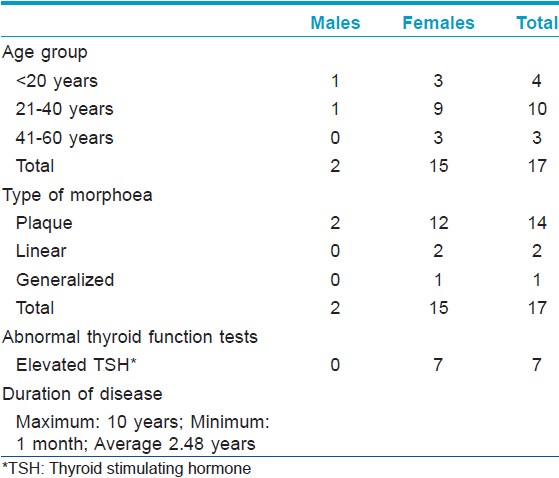 TSH levels were elevated in 7 (41.2%) patients, and all cases had normal values for T3, T4, anti-TPO antibodies, USG and FNAC. All the patients with abnormal TSH were females and were diagnosed to have subclinical hypothyroidism as they were asymptomatic. Six patients had plaque type morphoea and one had generalized morphoea. The two patients who suffered from linear morphoea had normal thyroid functions.

Morphoea is a connective tissue disease associated with sclerosis of the skin. It may be localized or generalized. The etiology and precise mechanisms that trigger the cascade of molecular events that culminate in skin fibrosis is not clearly understood. Many inflammatory and immunologic pathways are ultimately responsible for the vascular changes, increased collagen production and extracellular matrix proliferation. It is proposed that endothelial cell damage may represent the initial and pivotal step in the development of soft tissue change in morphoea.

There are many clinical subtypes of localized morphoea, which include plaque, profundus, bullous, linear, frontoparietal, segmental, and guttate type. Plaque type morphoea is the commonest subtype. [7] In our study, plaque type of morphoea was the commonest, followed by linear and generalized morphoea. The peak age of incidence is 20-40 years, [8] which was similar to our study. The female to male ratio is 3:1 in many studies, [8],[9] although our study recorded it at 7.5:1.

Morphoea is an immunological disorder and it may be associated with other autoimmune disorders. [10],[11] Organ specific auto-antibodies have been found to be more common in patients with morphoea than in controls. [1] The coexistence of two autoimmune diseases may not occur by chance, but could be attributed to autoimmune reactions elicited by the recognition of common antigens. [5]

Autoimmune thyroid diseases are one of the most common endocrine disorders. Hashimoto`s thyroiditis is a T-cell mediated organ specific autoimmune disease, that results in clinical hypothyroidism due to thyroid destruction which is mediated by infiltrating and locally activated thyroglobulin specific T-cells. Grave`s disease is characterised by hyperthyroidism due to excessive production of thyroid hormones induced by thyrpotropin receptor specific autoantibodies.

Demonstration of thyroid antibodies is essential for the evaluation of association between morphoea and autoimmune thyroid disease, and not merely on the basis of T3, T4 and TSH abnormalities. Thyroid antibodies were found to be within normal limits in our patients. In this study, abnormal thyroid function in the form of elevated TSH was found in 41.2% patients. It may just be a coincidental finding as the normal population can also show abnormal thyroid function. In conclusion, the abnormal thyroid function tests observed in patients of morphoea in our study should be considered a preliminary finding and further studies may be undertaken to detect or refute a definite association.