Background: Normal immune functioning requires sufficient levels of trace elements including zinc and selenium, while elements such as nickel can be immunotoxic.
Aim: To assess long-term abnormalities in zinc, selenium and nickel levels in patients with chronic recurrent warts.
Methods: Toenail samples were taken from 28 patients with chronic recurrent warts and 30 apparently healthy matching controls were analysed. Toenail concentrations of zinc, selenium and nickel were measured using inductively-coupled plasma-optical emission spectroscopy.
Results: Selenium levels were significantly higher in patients than in controls (P = 0.03). Levels of trace elements did not correlate with the number or duration of warts. Toenail nickel levels in all subjects were higher than globally reported values.
Limitations: A small sample size and the absence of regional reference ranges for concentrations of trace elements in toenails.
Conclusion: Zinc does not seem to be involved in the chronicity of warts, and it is unclear if selenium has a protective role against warts. Our finding of high concentrations of nickel in both patients and controls raises concerns about environmental exposure.

Nongenital warts (verrucae) are a common benign infection of epidermal cells with the human papillomavirus (HPV) that results in cell proliferation and a thickened papule on the skin.[1] Nongenital warts in healthy people are harmless and usually resolve spontaneously. The rate of resolution probably depends on a number of factors including host immunity.[1] However, some warts become chronic and resistant to treatment. The increased incidence and progression of human papillomavirus infection in immunosuppressed individuals illustrates the importance of cell-mediated immune responses in its control and resolution.[2] The reasons for apparent failure of the immune system in otherwise healthy individuals to clear warts are not completely understood.[3]

Zinc and selenium are trace elements essential for effective immune functioning[4] and influence susceptibility to viral infections,[5] while excess nickel may cause a variety of pathologic and immunotoxic effects.[6] Nickel may also negatively impact the humoral immune response.[7]

Our aim was to assess long-term abnormalities in zinc, selenium and nickel levels in patients with chronic recurrent warts. Compared with blood or urine, nails, particularly toenails, provide a relatively long-term measure of the body's content of trace elements and give the most time-integrated measure.[8]

This was an observational two-group comparative study performed at our dermatology outpatient clinic, Cairo University, Egypt. The study was approved by our Faculty Research Ethical Committee (derma REC). All collected samples were processed at our Faculty Central Laboratory for Research.

Thirty patients with one or more chronic recurrent non-genital warts (wart of 6-month duration or more, that failed at least one trial of conventional therapy) and 30 age- and sex-matched apparently healthy controls not known to suffer from any cutaneous or systemic illness were included in the study. Exclusion criteria included: subjects <15 years or >50 years old, pregnant or lactating ladies, history of major loss of weight or major surgery in the past six months, subjects having conditions known to affect trace elements levels like major nutritional disorders, liver diseases, gastro-intestinal illness or oral supplementations.

A detailed general and dermatologic history was obtained focusing on any current or past illness over the past 6 months, and a detailed skin examination was carried out. Routine laboratory investigations were performed, including complete blood counts, erythrocyte sedimentation rate, C-reactive protein, and liver and renal function tests. All data had been recorded in a preformed sheet. Eligible recruits were scheduled for a sampling appointment and were asked to not trim their toenails for at least one week.

Sampling of toenails for measuring concentrations of trace elements

To remove external contamination, subjects were asked to wash their toes thoroughly with soap and rinse with double deionized water, followed by thorough air drying. Approximately two millimeters were cut from one toenail/subject with sterile individualized stainless-steel clippers for immediate processing. Samples were washed with distilled water and then alcohol-dried in an oven at 11°C. Clippings from each participant were weighed and transferred into a beaker and 10 ml of concentrated nitric acid added. The solution was then heated for complete digestion, diluted in a volumetric flask with distilled water and analysed.

Twenty-eight patients with chronic recurrent nongenital warts and 30 apparently healthy controls were included in the final analysis. Data from two patients were withdrawn from analysis due to contaminated toenail sample and extreme zinc value (611 μg/g), not in linearity with the remaining values. 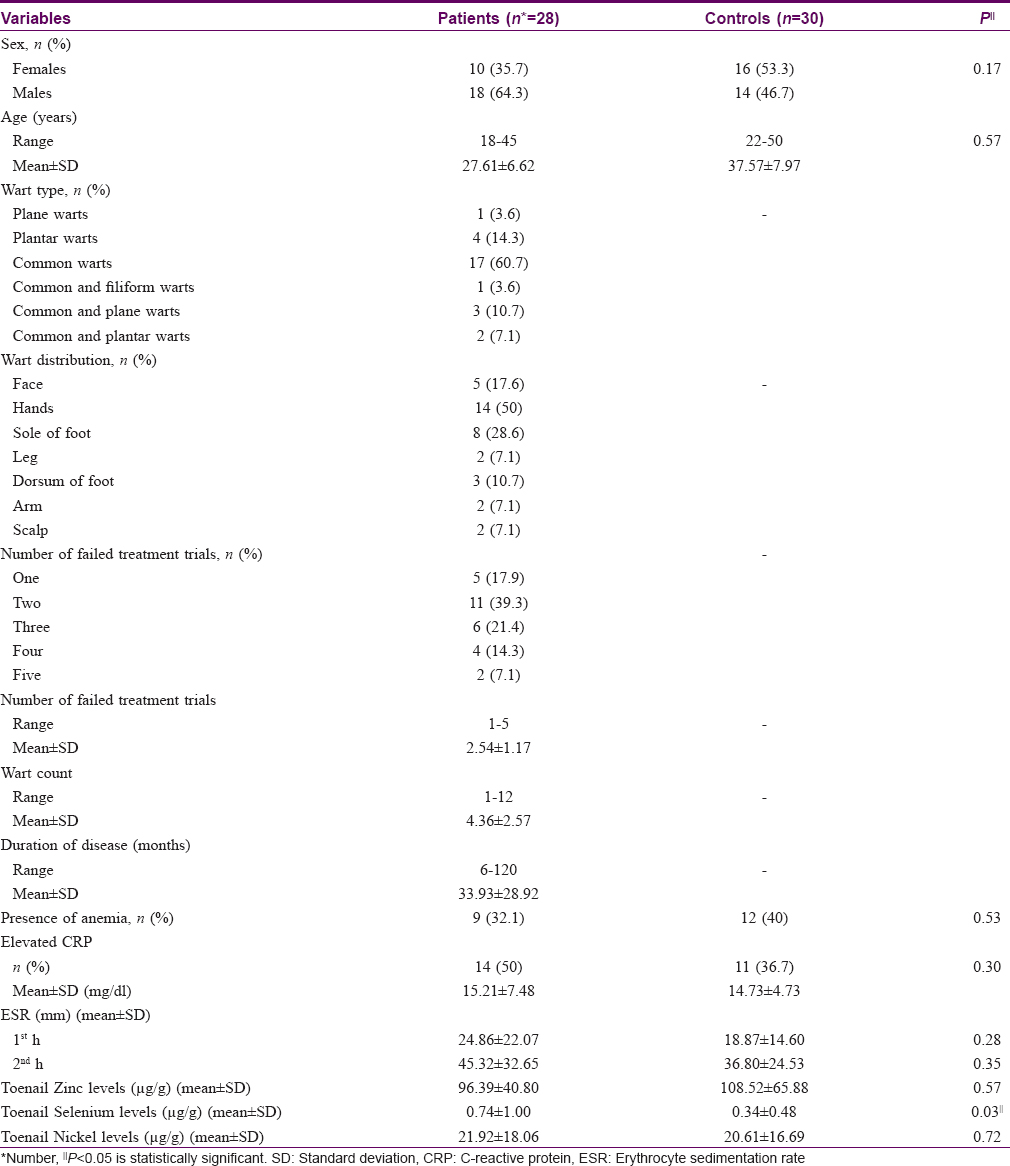 Although a high proportions of both patients and controls showed abnormal C-reactive protein, erythrocyte sedimentation rate and anemia, no statistical differences were detected between the groups. A significant inverse correlation was found between toenail selenium concentration and the number of patients with elevated C-reactive protein (r = −0.38, P = 0.04).

The mean toenail selenium concentration was significantly higher in the patient group (P = 0.03). No significant difference was detected between patients and controls with respect to zinc and nickel levels [Table - 1] and [Figure - 1].

Patients with recurrent or chronic warts in this study did not show long-term abnormal zinc levels, as reflected by their toenail concentrations; however, they showed slightly higher concentrations of selenium. Both patients and controls showed very high nickel concentrations with no significant difference between them.

The deficiencies of trace elements and infectious diseases often coexist and exhibit complex interactions.[5] Zinc is the only trace element whose possible contribution in human papillomavirus infections had been studied, but evidence is not conclusive. We found no reported studies of toenail zinc concentration in patients with viral warts, and the association between serum zinc deficiency and progressive or recurrent warts remains controversial.[9],[10]

Some investigators have reported low serum zinc in patients with warts,[9] while others failed to observe the same.[10] However, a possible role for oral,[9],[10],[11] topical[12] or intralesional zinc sulfate[13] in varying concentrations in the treatment of different types of cutaneous warts has been described. Al-Gurairi et al. reported low baseline serum zinc in patients with warts and that supplementation with oral zinc sulfate, when accompanied with elevation in serum zinc, is associated with a high cure rate.[9] Conflictingly, López-García et al. found that the efficacy of oral zinc sulfate in patients was not superior to that of placebo, but none of their patients in either group had low baseline zinc levels.[10]

Our findings suggest that persistent warts, are not associated with a disturbance in zinc levels in the long term, as reflected by toenail zinc concentrations. Interestingly, Mun et al. observed that treatment outcome did not seem to be related to increases in serum zinc levels with therapy in patients with warts, both responders and nonresponders.[11]

The role of zinc in the pathogenesis of warts remains unclear. The therapeutic effects of zinc sulfate may be due to enhanced immunity through zinc's immunomodulatory actions[14] or the virucidal effects[15] of high zinc concentrations and not necessarily due to a correction of zinc deficiency.

Serum zinc levels are not a reliable measure of zinc stores and therefore not recommended for routine screening.[16] Cellular zinc assays are a more sensitive indicator of whole-body zinc homeostasis, and intracellular zinc may possibly take part in the immune response against viral warts.[14] Ironically, it is not only the host cells that depend on zinc for their functions but also the infecting viruses, which use cellular free zinc ions (Zn2+) for their newly synthesized proteins.[15] Consequently, cellular systems controlling zinc balance constitute a natural protective barrier that limits access to zinc and thus interferes with virus replication. Indeed, disruption of this barrier, as in patients suffering from the rare genetic disease, epidermodysplasia verruciformis, leads to a zinc imbalance in the cell and confers an unusual sensitivity to infections by cutaneous human papillomaviruses.[17] Thus, assays of intracellular free zinc ions (Zn2+) might help clarify its role in the immunopathogenesis of viral warts.

Selenium is an essential trace element that is believed to boost immune responses by enhanced proliferation of activated T cells, and increased lymphocyte-mediated cytotoxicity and natural killer cell activity.[18] However, a 3-year randomized controlled trial with administration of selenium-enriched yeast failed to demonstrate any superiority over placebo in preventing the occurrence of warts in immunosuppressed patients despite increased serum selenium in the treated group.[19]

It might be that selenium is depleted in patients having chronic recurrent warts, due to oxidative stress,[20] but the present study found that the concentration of selenium in the toenails of patients was significantly higher than that in controls. The metabolism of trace elements is known to be closely interrelated. For example, mercury and arsenic antagonize the effects of selenium with and without affecting its concentration, respectively.[21]It is therefore not clear if the selenium levels in our patients were affected by other trace elements that were not assessed.

A significant negative correlation was found between toenail selenium concentration and the number of our patients with elevated C-reactive protein; selenium as an antioxidant can lower the levels of biomarkers of inflammation.[22]

Although no significant difference in toenail nickel concentration was found between patients and controls, values in 96.4% of our patients and all controls were considerably higher than those reported with populations in polluted areas,[21] and up to 60 times the French reference range (0.08–1.27 μg/g).[23] The pooled mean from several studies performed in adults was 10.18 μg/g, again a value much lower than in our participants.[24] Nickel has a direct effect on immune cells in that it can change natural killer cell activity and decrease the mobilization of some inflammatory cells into lesions.[6]

These alarmingly elevated nickel concentrations in our sample might be attributed to an external source either ingested or inhaled by subjects, or absorption into toe nails from external environment. Reported sources are contaminated water, air dust and nickel-containing coins.[25],[26] High values of toenail nickel were reported in an Arab-American population living near a large industrial zone in the most polluted area of Michigan, USA.[24] These results point to an environmental problem that may affect the health of the population, though the extent of damage is still not well-assessed. Although nickel as a contaminant could be found more in males who remain exposed to environmental pollutants more than females, our results did not reveal any significant sex differences in trace element levels, possibly due to our small sample size.

The absence of regional reference ranges for trace element concentrations in toenails is another limitation in interpreting our results. We also did not measure concentrations of other trace elements which could have contributed indirectly to the metabolism of zinc, selenium and nickel.

Further research is needed on the immunomodulatory role of trace elements in human papillomavirus infections. Data from this small study need to be verified on a larger scale, and with more trace elements. Correlations between toenail and intracellular zinc concentration in patients with chronic recurrent warts need to be looked at, including infected and noninfected tissues. It might also be useful to compare trace elements levels between immunosuppressed and immunocompetent subjects. Studying the metal content of human papillomavirus may extend our understanding of its pathogenic mechanisms and methods to evade immune regulation. There is a need to define reference ranges for toenail levels of trace elements in middle-eastern populations. We also recommend studies on the concentrations of other hazardous heavy metals in toenails in populations in polluted cities, and environmental measures to protect the populace of polluted cities from nickel toxicity.