Hand eczema is often a chronic, multifactorial disease which has enormous socio-economic consequences and a massive impact on patients′ quality of life. Oral and topical corticosteroids are mainstay of treatment but their long term adverse effects limit their use. In this study we used azathioprine as a steroid sparing agent. We compared the efficacy of topical clobetasol propionate 0.05% cream alone and in combination with low dose oral azathioprine in chronic hand eczema in this observer blinded randomized controlled trial.

One hundred and eight patients clinically diagnosed as hand eczema (disease duration of more than six months) were enrolled. The exclusion criteria in the study were pregnancy, lactating mothers, age less than 18 years or more than 65 years, any associated systemic diseases like diabetes, hypertension, thyroid disorders, any renal or liver disease, malignancy etc, and hypersensitivity to azathioprine. None of the patient was on any form of oral or topical medication for at least four weeks prior to study. Before starting the therapy, skin scraping for KOH examination and culture, skin biopsy to rule out psoriasis, baseline investigations and urine pregnancy test were carried out. Complete blood count and liver function tests were repeated weekly for four weeks and then monthly for next period of study. Patients were advised to take necessary steps for contraception to avoid pregnancy. At all visits all the patients were thoroughly examined and asked for common adverse effects like nausea, vomiting, diarrhea, any viral or bacterial infections. At the start of therapy patch testing was carried out to ascertain the etiology of hand eczema. Patients were randomized into two groups using block randomization. Group A was given a topical clobetasol propionate 0.05% cream twice daily application only and Group B was prescribed oral azathioprine 50 mg daily along with topical clobetasol propionate 0.05% cream twice daily application. Patients were instructed to use topical clobetasol cream intermittently i.e. to stop applying cream if there was no sign and symptoms and to reintroduce only when disease recurred. General preventive measures to avoid exposure to irritants were advised to all patients. Treatment was given for total duration of 24 weeks. Patients paid for the medicines themselves. The patients were asked to follow-up at two, four, eight, 12 and 24 weeks. Response was recorded for itching on a numerical scale from 0-10. Hand Eczema Scoring Index (HECSI) was used for assessing the response to treatment. [1] Statistical analysis was performed using unpaired -T test, Chi-square test and Mann-Whitney ′U′ Test wherever required. Complete remission was determined as more than 75% reduction in signs and symptoms.

A total of 91 patients completed the follow-up study of six months and were included in the analysis of data (intention to treat analysis was not done). Out of the total 91 patients, 62 (68.13%) were males and 29 (31.87%) were females. The male: female ratio was 2.1:1. The mean age of patients in Group A was 36.86 ± 11.55 years and in Group B, 35.82 ± 10.67 years. The average duration from which patients were having the hand eczema was 4.78 years (6 months to 30 years). All patients have tried some kind of oral and topical corticosteroids, anti-histamines, antibiotics in past but none of them reported the use of immunosuppressants.

Twenty four patients (26.3%) had positive response to patch testing. The maximum positivity of the patch test was for nickel antigen (20%). Bichromate, black rubber mix and colophony were the second most common antigens (10% each).

Total number of patients was 46 in Group A while 45 in Group B. There was a significant improvement in both the scores (p < 0.05) for both treatment groups [Table - 1]. At eight weeks, patients of Group B had complete response in 73.3% of patients which increased to 91.1% at 24 weeks. The same improvement for Group A was from 36.95 to 39.13 % at the end of 24 weeks. At 24 weeks mean percentage improvement in itching score was 74.15 and 95.55% for Group A and Group B respectively (P = 0.003). At 24 weeks mean percentage improvement in HECSI score was 64.66 and 91.29% (P = 0.001) in Group A and Group B respectively. Exacerbations were more in Group A than Group B. It was surprising that none of the groups reported any side effect requiring reduction of dosage or discontinuation of treatment. 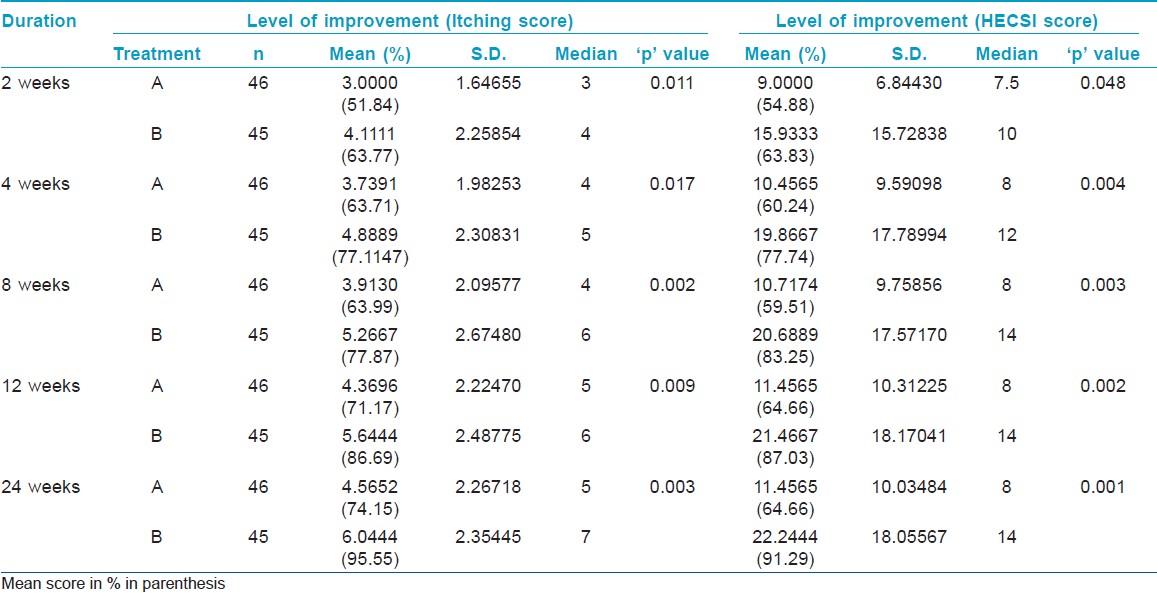 Table 1: Comparison of different treatment groups with respect to level of improvement in itching and HECSI score at different time intervals

Various steroid sparing agents were found useful in chronic hand eczema like azathioprine, cyclosporine, methotrexate, mycophenolate mofetil, etc. Azathioprine was found as useful agent for controlling the severity of disease of hand eczema patients in a review by Scerri. [2] Usual dose of azathioprine is 1-2.5 mg/kg daily in two divided doses. Though TPMT (Thiopurine methyltransferase enzyme) level should always be measured but if facilities for TPMT level assay are not available, low dose azathioprine (0.5-1 mg/kg/day) trial should be used along with extra care using hematological monitoring. [3] Azathioprine is lymphocyte specific immunosuppressant. It acts by disruption of purine synthesis, thus, interfering with the synthesis of DNA, RNA and proteins. Besides its action on purine metabolism, azathioprine also induces apoptosis and inhibits costimulatory signal for T cell activation. [4] One of proposed mechanism may be the action of azathioprine on memory T cells involved in chronic hand eczema associated with allergen exposure as it was found in a study of azathioprine in patients with inflammatory bowel disease by Tiede et al.[4] In other eczematous conditions like severe atopic dermatitis and parthenium dermatitis, azathioprine was proved to be highly effective. The main drawback of this study was that the patients were not followed up after the end of study period of 24 weeks.

In conclusion, low dose oral azathioprine therapy is an effective adjunctive treatment modality for controlling the severity of disease and reducing the frequency of exacerbation in patients with chronic hand eczema.