Topical sirolimus for the treatment of angiofibromas in tuberous sclerosis

Background: The skin is one of the most affected organs in tuberous sclerosis complex and angiofibromas are seen in almost 80% of such patients. These benign tumors impose a great psycho-social burden on patients. Objective: The aim of the study was to evaluate the effectiveness and tolerability of topical sirolimus for facial angiofibromas in patients with tuberous sclerosis complex. Methods: This was a prospective, single-blinded, cross-over study which involved twelve patients. We investigated the effect and safety of topical 0.1% sirolimus, which was obtained by crushing sirolimus tablets and mixing it with petrolatum. The patients were asked to apply the cream to one side of their face, and vaseline to the other side. The effect of topical sirolimus was evaluated using the “facial angiofibroma severity index.” Results: There was a significant improvement in the redness and extension of the tumors on the sides to which the active ingredient was applied. Some side effects such as itching and irritation occurred in three patients, which were treated with topical hydrocortisone cream. Conclusion: Topical sirolimus appears to be a promising, fairly well tolerated treatment for facial angiofibromas in patients with tuberous sclerosis complex. Although its efficacy diminishes with time, repetitive usage is effective.
Keywords: Angiofibromas, topical sirolimus, tuberous sclerosis

Tuberous sclerosis complex is an autosomal dominant neurocutaneous disorder in which multisystem hamartomas are seen. It is caused by the mutations in two genes: Tuberous sclerosis complex 1 on 9q34.3 that encodes the protein hamartin, and tuberous sclerosis complex 2 on 16p13.3 that encodes the protein tuberin.[1] Normally, these suppressor proteins inhibit the activation of mammalian target of rapamycin (mTOR). Any mutation in these genes lead to the dysregulation of this inhibitory process, leading to uncontrolled cell growth, proliferation and protein synthesis that results in multi-organ hamartomas.[2] This disorder has an incidence of 1/6000 births, and mostly affects the skin, kidneys, heart, brain and lungs.[1],[3]

The cutaneous manifestations of tuberous sclerosis complex include angiofibromas, forehead fibrous plaques, hypomelanotic macules or confetti-like lesions, periungual fibromas and shagreen patches.[4] Facial angiofibromas are small, symmetrical, pink to red papules which coalesce to form plaques. They are composed of blood vessels and fibrous tissue, and are seen in approximately 80% of patients, making it the most frequent cutaneous finding of this disease.[5] According to the recommendations of the “International Tuberous Sclerosis Complex Consensus Conference 2012,” they are considered as one of the major diagnostic criteria.[6] Although benign in nature, they can bleed or obstruct the nasal openings.[7] They cause great psychosocial burden to patients.[8] Therapeutic options included cryotherapy, electrocoagulation, dermabrasion, laser surgery and podophyllotoxin application.[9]

Sirolimus is a lipophilic lactone isolated from the soil bacteria, Streptomyces hygroscopicus. First considered to be an antifungal, it was subsequently found to have anti-T cell properties. It is now used as an immunosuppressant to prevent graft rejection, and classified in the anti-cancer drug family called mammalian target of rapamycin (mTOR) inhibitors. It is used after renal transplantation and is routinely incorporated in drug-eluting stents during cardiac angioplasty.[10],[11]

Hofbauer et al. reported a case of tuberous sclerosis complex with facial angiofibromas that improved after using systemic sirolimus following a renal transplant.[12] Since then, the effect of sirolimus on angiofibromas has been investigated. Systemic sirolimus is expensive and may cause carcinogenesis, hypersensitivity reactions, hypercholesterolemia and hypertension.[13] Topical application was hence considered as an alternative. Wataya-Kaneda et al. were the first to use sirolimus topically.[14] The topical preparation is obtained by crushing the pills and mixing it with vaseline, or using the solution form of sirolimus.

This study was approved by the Erciyes University Ethics Committee for Clinical Research (identification number of 2013656).

Children diagnosed with tuberous sclerosis complex according to the Roach and Sparagana criteria were included in the study.[15] Informed consent was obtained from the parents. Patients who could not come regularly for follow up were excluded.

Topical 0.1% sirolimus was prepared by the pharmacy department of the hospital. The tablets of 1 mg sirolimus were crushed and mixed with petrolatum, and stored in rigid plastic containers. Pure vaseline was put in similar looking containers. The containers were labeled “1” and “2,” and the patients were unaware about which contained sirolimus. They were asked to apply one cream to the left side of their face, and the other cream to the right side, twice daily for three months. They were advised to apply hydrocortisone cream in the afternoon if they developed redness or tenderness. The lesions were photographed at the beginning of the study and after three months. They were evaluated using the “facial angiofibroma severity index” created by Salido-Vallejo et al. [Table - 1].[16] After calculating the mean scores after three months, the side of application was reversed and continued for another three months. The mean facial angiofibroma severity index was again calculated at the end of six months, after which the patients were asked to stop the treatment. 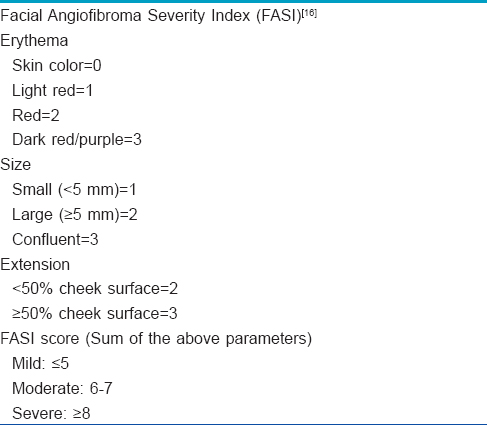 A few months after stopping treatment, the angiofibromas started to increase in size and redness, which was also observed by the physicians. The facial angiofibroma severity index was calculated again in order to understand if the effect of topical sirolimus diminished over time. After observing clinical and statistical relapse at the end of one year, we asked all the patients to re-apply topical sirolimus. This time it was to both sides of the face, twice daily for three months. After this, the facial angiofibroma severity index was calculated to assess the response to medication.

The lesions were photographed at baseline and at the end of the 3rd, 6th, 12th and 15th month. The study data was analyzed using Mann–Whitney U-test and Wilcoxon signed-rank tests with the SPSS software version 15.0 for windows (SPSS Inc., Chicago, IL, USA).

Twelve months after the beginning of the study (i.e. six months without treatment), the facial angiofibroma severity index scores were re-evaluated because some of the patients had relapse. The mean scores for the right and left sides were 5.67 ± 0.49 and 6.42 ± 0.79, respectively. This increase in score was statistically significant on both sides, which meant that the effect of topical sirolimus was transient.

Tuberous sclerosis complex is a genodermatosis with multisystem hamartomas. The skin is one of the most commonly affected organs. Angiofibromas, hypopigmented macules, shagreen patches and fibromas are frequently observed clinical findings. Among these, angiofibromas are the most common and cause considerable cosmetic and psychosocial problems.[17] Several methods have been used to remove these benign tumors, such as radiofrequency ablation, cryotherapy, electrocoagulation, dermabrasion, laser surgery and podophyllotoxin application. Some of these are expensive, whereas others are destructive and lead to scar formation.[18],[19],[20],[21],[22],[23]

Sirolimus is a member of the family of immunosuppressive and anti-cancer agents, known as mammalian target of rapamycin (mTOR) inhibitors. It inhibits cancer cell induced angiogenesis and proliferation. For this reason, it has been used for the treatment of angiomyolipomas, lymphangioleiomyomatosis and angiofibromas.[8],[10],[11],[28],[29] Haemel et al. reported the first case of facial angiofibromas treated with topical sirolimus.[30]

Although some authors applied the solution form of sirolimus directly to the skin, it caused irritation. Subsequently, the tablet form of this molecule was preferred.[31] The tablets are crushed and dispersed homogeneously in petrolatum. In our study, we used the tablet form (Rapamune 1 mg coated tablet, Pfizer Limited, United Kingdom), which were crushed and mixed in vaseline to a concentration of 0.1%.

Our results were similar to those of previous authors. After three months of application, the angiofibromas on the left side of the face were smaller and paler; this effect was staistically significant. After reversing the application side after three months, a similar beneficial effect was noted proving the efficacy of topical sirolimus.

Unlike previous studies, we were able to see and re-evaluate the patients after a treatment-free interval. Unfortunately, recurrence of the lesions was a consistent finding among all patients. The mean facial angiofibroma severity index on both sides of the faces was calculated again and was found to be significantly increased. This data showed that the effect of topical sirolimus is transient, as noted in previous studies. The patients were asked to restart topical sirolimus, and apply it on both sides of the face for another three months. The statistically significant improvement on repeat application shows that such usage is possible with good results. We were unable to find any previous studies that reported on the efficacy of repeated applications of topical sirolimus.

Some authors noted that younger patients responded better to treatment, as early lesions mainly consist of a vascular component.[5] However, our results were different. We divided the patients into two groups according to age (≤10 years and >10 years old) and found no statistical difference between both groups with respect to treatment response.

Considering the side effects (including scar formation, post-inflammatory hyperpigmentation, and pain) seen with the conventional treatment options, topical sirolimus seems to be a fairly well tolerated choice. Previous reports observed no side effects with topical sirolimus, or minimal side effects such as erythema and minor bleeding. Only two patients were reported to have detectable blood levels of sirolimus, and even those were far below the conventional immunosuppressive levels.[27] In our study, three patients had redness and irritation, which disappeared in a few days with the application of hydrocortisone cream once daily. A limitation of our study was that we were unable to measure the blood levels of sirolimus.

Topical sirolimus seems to be a promising treatment option for facial angiofibromas. As it has few side effects and is easy to apply, more physicians will use it in the future. We found that topical sirolimus was effective when used in a repeat treatment protocol for angifibromas that recurred after stopping therapy.