A 42-year-old male diagnosed with acquired immunodeficiency syndrome (AIDS) since 5 years and currently on combined antiretroviral therapy (cART) with tenofovir, lamivudine, and efavirenz, presented with nail lesions of 4 years duration. The patient first noticed brownish-black pigmentation of all the nails of the left hand, and over time there was thickening of the nails with the surface turning rough. During the next 3 years, the toenails also developed similar features.

On examination, the fingernails of the left hand showed dystrophic changes characterized by brownish black pigmentation, rough surface of the nail plate, and subungual hyperkeratosis [Figure - 1]. There was an ill-defined ulcer (traumatic) of the left middle finger partly destroying the nail [Figure - 2]. The lateral and posterior nail folds were normal. The big toe and little toes of the feet showed similar dystrophic changes [Figure - 3]. A total of 9 nails were involved. The rest of the skin and mucous membrane were normal. Systemic examination showed HIV wasting disease and cART-induced lipodystrophy. There was no hepatosplenomegaly, and respiratory system was normal.

The patient's hemogram, renal, and liver function tests were within normal limits. Serological tests for syphilis, hepatitis B and C, and herpes simplex 1 and 2 were negative. Current CD4 count was 97 cells/mm3. The ulcer of the left finger was negative for bacteria, acid fast bacilli, and fungal culture. Culture of the sputum and bronchial-alveolar lavage were negative for acid fast bacilli, fungus, and protozoans. Nail clippings for fungus in 20% KOH showed fungal hyphae. The nail clippings were sent for fungal culture. Culture was done separately for 3 finger nails, 2 big toenails, and 2 little toenails. Thus, a total of 7 nails were cultured separately. A positive culture was repeated two more times a week apart. Repeated fungal cultures of the finger and toe nails in Sabouraud's dextrose agar with gentamycin and actidione at 22°C after 1 week showed greenish-velvetty colonies with red pigment diffusion [Figure - 4]. Staining of the fungal growth with lactophenol cotton blue showed thin, hyaline hyphae, with erect conidiophores bearing metulae with secondary branching phialides with a “paint brush” appearance, bearing ovoid unicellular conidia, which were diagnostic of T. marneffei [Figure - 5]. Subculture in Sabouraud's dextrose agar at 37°C and staining with gram stain showed round to oval septate yeast forms, diagnostic of the dimorphic pathogenic T. marneffei [Figure - 6]. We made a final diagnosis of total dystrophic onychomycosis caused by T. marneffei and the patient was put on systemic fluconazole (400 mg weekly) because he could not afford amphotericin or itraconazole. The response to fluconazole was modest. There was only slight decrease in the thickness of the nails.

Our AIDS patient with a CD4 count of 97 cells/mm3 presented with clinical features of total dystrophic onychomycosis. A positive nail clipping for fungus, positive culture for T. marneffei, characteristic morphology with lactophenol cotton blue, and subculture at 37°C showing septate yeast forms indicated dimorphic pathogenic strain, which is the conversion of the mycelial form seen at 22°C to the yeast form seen at 37°C. This enabled us to make a diagnosis of onychomycosis caused by T. marneffei. The presence of septate yeast forms in subculture in tissues is characteristic of pathogenic strains of T. marneffei because it is a dimorphic fungus which is never seen in cases of contamination. A positive culture for this fungus was seen in all the 7 nails cultured separately. A repeat culture done twice, 1 week apart, also showed growth of the same species. No dermatophyte species were grown in culture. The above features definitely satisfies the criteria laid by English and Summerbell et al. for nondermatophyte species causing onychomycosis as a pathogenic strain and not as a contaminant.[2] Moreover, even though common penicillium and mould species are known to be environmental contaminants, this fungus is not known to be a contaminant, and though the source is believed to be soil, evidence is lacking. In tissue specimens, the round to oval yeast forms of this fungus may resemble histoplasmosis.[2] T. marneffei usually caused severe systemic disease in AIDS patients, presenting with pulmonary symptoms, anemia, lymphadenopathy, and hepatosplenomegaly. However, our patient had no systemic involvement clinically or with investigations. The cutaneous manifestations of this fungus are molluscum contagiosum like lesions, acniform papules, necrotic papules, and mucosal ulcers, none of which were seen in our patient. The lack of cutaneous and systemic involvement and only nail involvement by this fungus in an AIDS patient with low CD4 count on combined antiretrovital therapy is the unique feature of this case. Moreover, this fungus is not endemic in our state. Our patient has also not been in any area where this fungus is endemic. However, cutaneous and systemic Talaromyces infection has been reported in AIDS patients with very low CD4 counts in regions where this fungi is not endemic. The list of fungi rarely causing onychomycosis in patients is given in [Table - 1].[3],[4],[5],[6],[7],[8] Failure of early diagnosis of systemic Talaromyces infection and delay in treatment usually causes mortality in AIDS patients. Talaromyces causing onchomycosis has been reported in India, however, these reports have not followed the stringent criteria which we have followed for diagnosing nondermatophytosis onychomycosis, and in such cases raises the doubt of being a contaminant.[9],[10] Intravenous amphotericin (0.6 mg/kg) followed by itraconazole (400 mg/day) are the first line drugs for Talaromyces causing systemic or cutaneous involvement, whereas posaconazole, voriconazole, terbinafine, and fluconazole are alternatives. 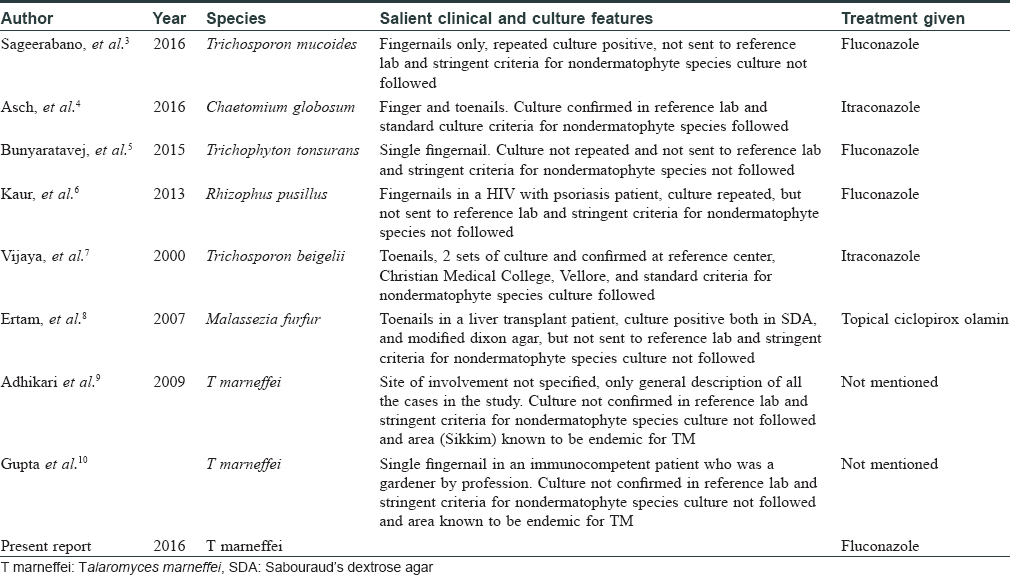 We are reporting a very rare case of onychomycosis caused by T. marneffei in the absence of systemic involvement in an AIDS patient on combined antiretroviral therapy.