Dermoepidermal junction is the most complex structural and functional microscopic zone of the skin that enables both epidermal and dermal units to interact in many complex ways in order to perform various functions. Elimination of exogenous foreign substances or altered dermal constituents from dermis to the skin surface via epidermal channel is one of the functions of this zone which has been the mainstay in the pathogenesis of various perforating dermatoses.

The first case of perforating dermatosis was described by Josef Kyrle[1] in 1916 who termed it as “hyperkeratosis follicularis et parafollicularis in cutem penetrans.” In 1927, Fisher[2] described a patient with circinate papular eruption on neck containing perforating amorphous plugs but he did not elaborate further and considered it as an atypical presentation of what Kyrle had described before. The phenomenon of expulsion of such materials via epidermis was first observed in detail by Freudenthal[3] in 1930 who identified it as amyloid in his own case. In the subsequent years, many such cases were reported and then in 1958, the term “elastosis perforans serpiginosa” was given for a particular variant of perforating disorder by Dammert and Putkonen.[4] Mehregan[5] also described a similar perforating disorder and coined them as “reactive perforating collagenosis.” In 1968, Mehregan described a series of 11 cases of “elastosis perforans serpiginosa” and based on such descriptions, he first proposed the concept of “transepidermal elimination” in 1970.[6],[7]

Transepidermal elimination is a purposeful, pathologic, dermoepidermal reactive phenomenon incited by exogenous substances or altered dermal constituents (of inflammatory, metabolic or neoplastic origin) and characterized by pseudoepitheliomatous hyperplasia of epidermis and/or follicular epithelium and formation of multiple transepithelial perforating channels, facilitating the extrusion of the altered dermal material or foreign substances to the exterior.

Concept of Transepidermal Elimination and Pathogenesis

During the conceptual formulation of transepidermal elimination, Mehregan described three types of epidermal reaction to foreign materials in the dermis.[7] Those were:

Without going into the detail of each example of transepidermal elimination, the sequence of pathological events can be generalized and summarized. It starts with the binding of foreign or altered dermal constituents to a receptor which is still unidentified. It incites a dermal reaction releasing some chemical mediators leading to epidermal hyperplasia and formation of multiple transepidermal perforating channels. The foreign substances get surrounded and phagocytosed by the epidermal cells of these perforating channels and are subsequently moved upward to the surface.[8] Recently, the receptor for advanced glycation endproducts has been suggested to play a role in the pathogenesis of acquired reactive perforating collagenosis by modulating the collagen–keratinocyte interaction and keratinocyte migration.[9]

Some authors have described yet another type of transepidermal elimination where necrotic and altered dermal material gets incorporated in the follicular lumen, followed by slow elimination to the surface. This process is the hallmark of perforating folliculitis, but may also be seen in infective and noninfective granulomatous conditions such as lupus vulgaris and Jorge Lobo's disease (through infundibular epithelium), respectively.[10],[11]

Of note, the process of transepidermal elimination has also been reported to occur through eccrine duct opening in one case of cutaneous leishmaniasis in human immunodeficiency virus (HIV) positive patient wherein amastigotes were found within the epithelial cells of secretory eccrine glands and ducts indicating the feasibility of elimination through eccrine duct opening.[12]

There are two chief prerequisites for transepidermal elimination. These are:

Nature of the inciting dermal stimulus

Stimulus should not be very irritant, otherwise epidermal necrosis would occur. Neither should it be inert, or else there would be no dermal reaction. Hence, stimulus should be irritant enough to induce inflammation and reactive hyperplasia of epidermis without any major structural alteration or necrosis.[13]

Location of the dermal stimulus

Clinical and histopathologic features of these four perforating conditions have been summarized in [Table - 2].[15] 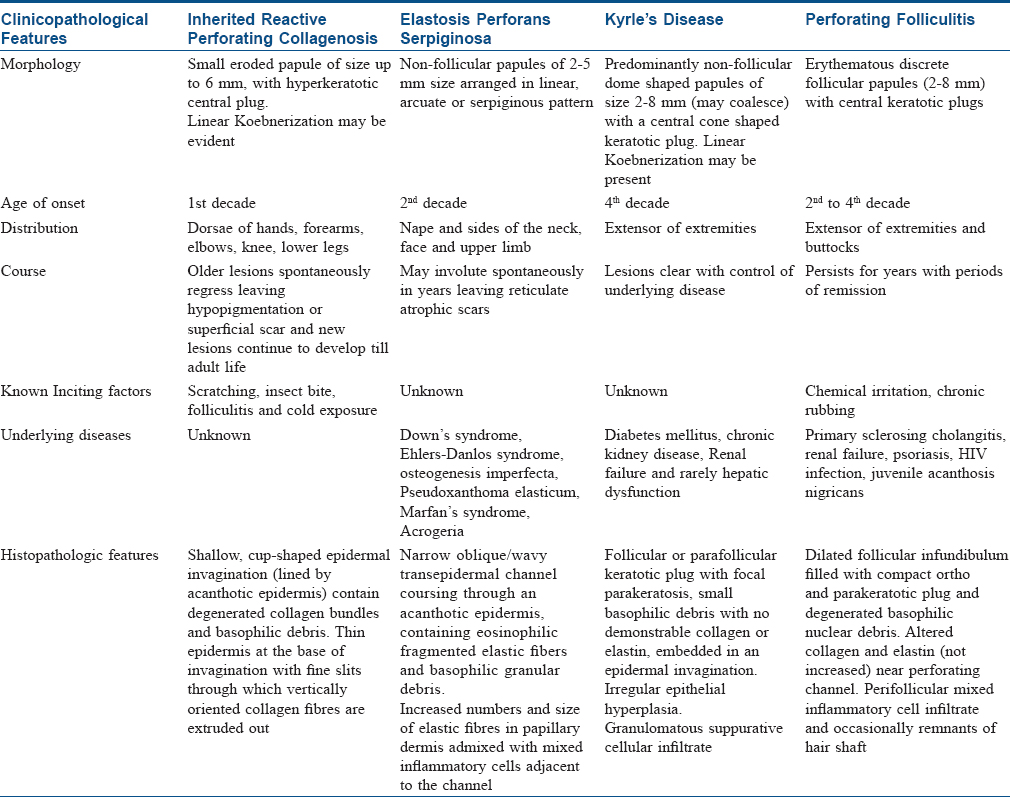