Tuberous sclerosis, also known as Bourneville′s disease, is an autosomal dominant genetic disorder classically characterized by the triad of mental retardation, seizures and facial angiofibromas. Neurological presentation of tuberous sclerosis occurs typically in children with seizures and intellectual impairment. However, approximately 50% of patients who fulfill the diagnostic criteria have normal intellect and 15% remain free from seizures. Genetic studies have shown that two-thirds of cases do not have affected parents, and in such cases the disease results from a new dominant mutation either in the tuberous sclerosis 1 [TSC1] gene on chromosome 9q34 or the tuberous sclerosis 2 [TSC2] gene on chromosome 16p13.3, with the latter accounting for an estimated 78% of cases. [1]

A 65-year-old man from Maharashtra developed a single episode of generalized tonic-clonic seizure one day prior to presentation. There was no preceding history of fever, cough, diarrhea or fall. He gave no history of seizures in the past. He was referred to the dermatology department for skin lesions on the face, which were present since childhood. There was no history of similar skin findings or associated symptoms in siblings or parents. On examination, he was found to have facial angiofibromas [Figure - 1]a and b, forehead plaques [Figure - 1]c, hypopigmented plaques over lower back and gluteal region suggestive of shagreen patch [Figure - 1]d. He also had coarse pits on the teeth, longitudinal grooves over toe nails of both feet and a few periungual fibromas [Figure - 2]a. He also had an incidental finding of nevus sebaceous [Figure - 2]b on the right side of scalp present since childhood. Genital examination revealed skin colored to erythematous, asymptomatic, sessile and pedunculated lesions over scrotum, which was present since childhood [Figure - 3]. Ophthalmological evaluation was normal. He was admitted and treated with phenytoin orally.

Investigations revealed normal hemogram, liver function tests and blood sugar level. However, deranged renal function with a serum creatinine level of 1.8 mg/dl was detected. Computed tomography (CT) scan brain revealed subependymal calcified nodules while that of the abdomen showed bilateral renal cysts. Echocardiography of the heart was essentially within normal limits. Detailed evaluation of other systems revealed no other abnormalities. The serological test for human immunodeficiency virus (HIV) was negative. No evidence for any other cause for epilepsy was detected. Histopathology of the scrotal lesions revealed coarse collagen bundles around proliferating dilated blood vessels, consistent with angiofibroma [Figure - 4].Since creatinine levels were not very high as to require dialysis, only a low protein diet was advised.

Bourneville′s disease (tuberous sclerosis) is clinically characterized by the triad of refractory epilepsy, mental retardation (sometimes severe) and angiofibromas of the face (typical for 70-90% of the patients), along with other types of cutaneous lesions. In the brain, there are hamartomas and calcified tubers/nodules (cortical brain stones), which cause refractory epilepsy and hydrocephalus. Angiofibromata (formerly misnamed adenoma sebaceum) consist of a proliferation of fibroblasts around blood vessels. Other lesions include angiolieomyomas of the kidneys, liver, testis, adrenal gland, rhabdomyomas of the heart and retinal glial nodules. Subependymal calcified nodules are typical of subependymal hamartomas associated with tuberous sclerosis. They are found mostly along the lateral ventricles. In 10-15% of patients, subependymal nodules can transform into giant cell astrocytomas. They also frequently calcify with increasing age and can cause obstructive hydrocephalus.

Our patient met the modified criteria for the diagnosis of tuberous sclerosis [Table - 1]. The characteristic features of the syndrome are skin lesions, mental retardation and epilepsy, but these show very wide variation in age of onset and severity. Onset before the age of 5 years with cutaneous changes or with epilepsy is usual, although the disease may remain latent until adolescence or adult life. [2],[3] Late onset epilepsy has been described as late as 59 years. [4] However, occurrence of the first episode of seizure at 65 years in our patient is probably one of the latest ages at which it has been described. The seizures are most likely due to the calcified subependymal nodules, probably astrocytomas, The patient is being treated with antiepileptics and is under consideration for surgery/oral rapamycin. 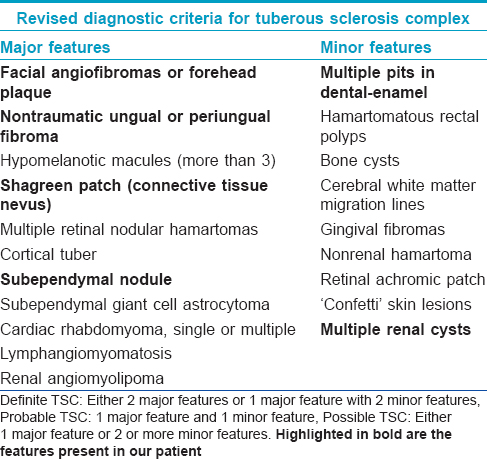 Skin lesions are found in 60-70% of cases. Lesions of four types are pathognomonic, angiofibromas, periungual fibromas (Koenen′s tumours), shagreen patch, and white ovoid or ash-leaf-shaped macules. Angiofibromas have been described on face and vulva. However, we were unable to find any previous reports of scrotal angiofibromas. Acrochordon-like angiofibromas on the scrotum appears to be a novel finding.

Rapamycin is an immunosuppressant which forms a inhibitory complex with immunophilin FKBP12, and binds to and inhibits mammalian target of rapamycin (mTOR). It prevents activation of T and B cells by inhibiting their response to interleukin 2. It also has anti-neoplastic effects exerted through the downregulation of angiogenesis and the correction of aberrant growth signals. It has opened up new therapeutic options in tuberous sclerosis and has been found to reduce associated tumors in the brain, skin, and kidneys. [5] It is poorly water soluble, limiting its bioavailability. Rapamycin exhibits linear pharmacokinetics over the dose range of 1-25 mg. Peak plasma levels are generally reached 0.5-2 h after an infusion. A total of 85% of the drug is bound to plasma protein and the half-life is 55 h. Elimination occurs primarily through the feces with only a small portion found in the urine. It is available in the market in two formulations: oral solution (60 mg per 60 ml) and tablets of 1 and 2 mg. Rapamycin for systemic manifestations is usually initiated at 0.2 mg/kg/day (1 mg/day) and titrated with adverse effects to as high as 5 mg/day. Serum levels of 11 and 13 ng/ml are to be maintained during the course. Everolimus, a derivative and prodrug for rapamycin has been Food and Drug Administration (FDA) approved for subependymal giant cell astrocytoma not amenable to surgery. It is also proposed as an antiepileptic medication in cases of epileptogenic cortical dysplasia and has been shown to reduce seizures and cognitive defects. This makes the early diagnosis of tuberous sclerosis even more important in the present day world.

Rapamycin also has a role in reducing skin lesions, especially facial angiofibromas. [6] Inhibition of mTOR pathway by topical rapamycin decreases the output of vascular endothelial growth factor (VEGF) by inhibiting hypoxia-inducible factor (HIF) expression and by directly repressing endothelial cell proliferation. Presently, rapamycin is only available as pharmacy made preparations of 0.1% in white soft paraffin ointment for facial angiofibromas. Rapamycin tablet crushed into 30 ml of 1% ointment or oral solution of rapamycin (1 mg/ml) are the usual methods employed for topical use.