Tumor necrosis factor-alpha inhibitors for the treatment of psoriasis patients with liver cirrhosis: A report of four cases with a literature review

Patients with psoriasis are at an increased risk of developing liver disease due to various factors. The existing data regarding the treatment of psoriasis patients with associated liver cirrhosis is limited. We report four patients of psoriasis with liver cirrhosis who were treated with TNF-alpha inhibitors for a mean duration of 35.4 months. Two patients were treated with etanercept, one with adalimumab and one was treated with both infliximab and etanercept. Three patients tolerated the treatment well without any deterioration of liver disease whereas one died of progressive liver disease. Although large-scale, controlled studies are needed, this case series provides insights regarding the long-term safety of TNF-alpha inhibitors in patients with psoriasis and liver cirrhosis.
Keywords: Adalimumab, cirrhosis, etanercept, infliximab, psoriasis, TNF-alpha inhibitors

Psoriasis patients are at a higher risk of developing liver disease due to various reasons. They are at an increased risk of non-alcoholic fatty liver disease, one of the main causes of liver cirrhosis.[1],[2] Another factor is the over-consumption of alcohol which is common among psoriatics. It is the most common cause of liver cirrhosis in the Western world.[3] Finally, most systemic agents used for the treatment of psoriasis are hepatotoxic, especially methotrexate.[4] Although relatively safer in terms of liver injury, TNF-alpha inhibitors have also been reported to be hepatotoxic.[4],[5] Therefore, current guidelines suggest regular monitoring of all psoriasis patients using systemic therapy for signs of liver toxicity.[6],[7]

A 63-year-old man with severe generalized plaque psoriasis was treated with topical corticosteroids and emollients for six years. His medical history was not significant except for chronic obstructive pulmonary disease. Laboratory tests including complete blood count, prothrombin time, liver transaminases, serum bilirubin, electrolytes, lipids and creatinine were within the normal range. He had upper gastrointestinal bleeding, and abdominal ultrasound revealed liver changes consistent with cirrhosis. Gastroscopy revealed portal gastropathy and grade I and II esophageal varices. Markers of autoimmune hepatitis, hepatitis A, B and C were negative. As investigations did not identify the cause of cirrhosis, he was labelled to have cryptogenic cirrhosis. He was treated with etanercept, 50 mg twice weekly following which his skin condition significantly improved. A PASI 75 response was achieved by the end of the third month of therapy. During the two years of follow-up, his serum albumin levels had only marginally increased. Serum transaminases were assessed monthly and remained within the normal range. The patient was in remission during this entire period [Table - 1]. 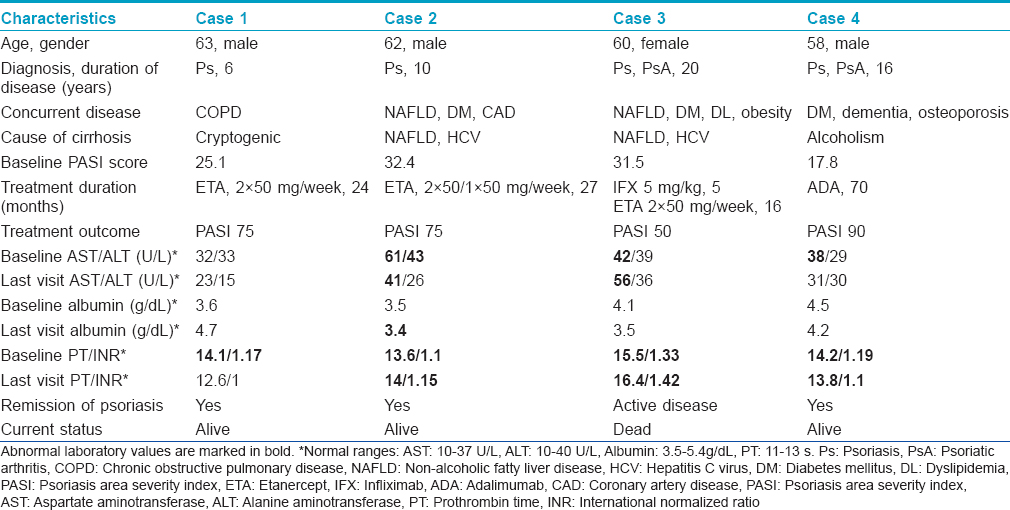 Table 1: Demographic features, treatment and outcome of the cases

A 62-year-old man had a ten-year history of psoriasis and past infection with hepatitis C virus. He also had diabetes mellitus, coronary artery disease and liver cirrhosis. The cirrhosis was probably related to non-alcoholic fatty liver disease secondary to hepatitis C virus infection. His previous treatments included methotrexate, acitretin, psoralen and ultraviolet A and narrow-band ultraviolet B phototherapy over the course of the disease. We started treatment with etanercept, 50 mg twice weekly. He achieved a PASI 50 response after four months of therapy. However, he had elevated liver transaminases (five times the upper normal limit) after about one year of treatment. He was diagnosed to have etanercept induced liver toxicity. Viral and autoimmune hepatitis was excluded by extensive workup and etanercept was stopped. The liver transaminases gradually returned to normal within a month and topical treatment was initiated. Etanercept was restarted after six months as his psoriasis worsened during follow-up. He is currently being treated with etanercept, 50 mg once weekly with psoriasis in remission and no deterioration in liver condition for 27 months.

A 60-year-old woman with a history of psoriasis since twenty years also had psoriatic arthritis, diabetes, hyperlipidemia, obesity and non-alcoholic fatty liver disease. Herprevious treatments included methotrexate, acitretin, cyclosporine and phototherapy. She had a liver biopsy which was consistent with chronic hepatitis C virus infection and grade III fibrosis. As the hepatitis C virus RNA levels were undetectable, she was not given interferon therapy. She was treated with infliximab in a dose of 5 mg/kg body weight. A PASI 50 response was achieved after the third infusion but secondary unresponsiveness developed at the end of five months. We then decided to switch to etanercept. Repeat screening tests revealed positive hepatitis C antibodies and positive hepatitis C virus RNA. She had mild thrombocytopenia, hypoalbuminemia, hyperbilirubinemia and a Child-Pugh's score of 5. No interferon therapy was given to prevent probable liver failure.[14] Etanercept was initiated in a dose of 50 mg, twice weekly for severe psoriasis and psoriatic arthritis, without any additional antiviral therapy. Besides the significant improvement of her psoriasis and arthritis, hepatitis C virus RNA became negative within six months. Etanercept was later discontinued due to non-compliance. Following this, her liver functions progressively worsened and she developed ascites and jaundice. She died a year later with hepatitis C virus infection and non-alcoholic fatty liver disease - induced liver failure as the cause of death. Her hepatitis C virus RNA was negative at the time of death.

A 58-year-old man with chronic alcoholism had psoriasis and psoriatic arthritis for 16 years. He also had diabetes mellitus, osteoporosis and dementia. His previous treatments included topical corticosteroids, vitamin D analogues, narrow band ultraviolet B, psoralen and ultraviolet A and methotrexate. He was diagnosed to have liver cirrhosis due to alcoholism. He was treated with adalimumab following which a PASI 90 response was achieved in two months. He is still in remission after 70 months of therapy and does not have any deterioration in liver function. His prothrombin time was shorter compared to the pre-treatment value. This may be attributable to abstinence from alcohol or relief of inflammation with treatment.[15],[16]

The literature on treatment of psoriasis with TNF-alpha inhibitors in the setting of cirrhosis is limited. Using a PubMed search with the keywords “liver cirrhosis, psoriasis and psoriasis treatment,” we found three publications.[8],[9],[10] These were from the same center in Germany and each publication reported one patient. These patients had common features such as psoriatic arthritis, diabetes and hereditary alpha-1 antitrypsin deficiency that led to histologically proven micronodular liver cirrhosis. The successful use of infliximab in a 52-year-old man with normal liver enzymes was reported by them.[8] Another case report was of a 53-year-old man with a stable course of liver enzymes during the twelve weeks of treatment with etanercept. That patient was previously treated with infliximab but it had to be stopped due to monetary constraints.[9] The last publication described the safe use of adalimumab in a psoriasis patient who had stable liver enzymes during the eight months of therapy.[10]

Liver cirrhosis is an advanced stage of liver fibrosis due to chronic liver injury. The most common causes are alcoholism, viral hepatitis, autoimmune hepatitis and non-alcoholic fatty liver disease.[17],[18],[19] Psoriasis patients have multiple risk factors for cirrhosis such as alcoholism, non-alcoholic fatty liver disease and drug-induced toxic hepatitis.[2],[3] Three of our patients had similar findings while one case was diagnosed to have cryptogenic liver cirrhosis.

We report four cases with severe psoriasis and liver cirrhosis successfully treated with TNF-alpha inhibitors. The mean duration of treatment was 35.4 months. No clinical or laboratory signs of deteriorating liver function was seen in three cases during the course of treatment. However, progressive liver disease led to death in one case. In that particular case, TNF-alpha inhibitors were initiated when the patient had mild cirrhosis (Child-Pugh score 5) and non-replicative hepatitis C virus infection. The prior use of other hepatotoxic agents (methotrexate and acitretin), poorly controlled diabetes, non-alcoholic steatohepatitis and hepatitis C virus infection may have precipitated fatal liver failure. Their impact on the outcome could not be determined separately.

Most systemic anti-psoriatic agents are hepatotoxic to some extent. Methotrexate is the most significant and causes fibrosis in 4% of cases.[20] Cyclosporine causes cholestasis due to intrahepatic vasoconstriction.[21] Acitretin causes transient and reversible elevation of liver enzymes in up to 15% of patients and there are a few reports of severe hepatotoxic reaction progressing to liver cirrhosis.[22] All three TNF-alpha inhibitors approved for the treatment of psoriasis can cause hepatotoxicity. With infliximab, liver toxicity is rare and reported in about one case per 16,500 treated people per year.[23] Hepatotoxicity can manifest as drug-induced hepatitis, autoimmune hepatitis, cholestatic liver injury, reactivation of hepatitis B virus or hepatitis C virus and fulminant hepatic failure.[24],[25]

Two of our cases had hepatitis C virus infection. However, it is not a contraindication to TNF-alpha inhibitor therapy as these agents do not increase transaminase levels or viral load in the short-term. Long-term data is lacking.[24],[26] Recently, an improvement in liver function and viral load during TNF-alpha inhibitor therapy has been reported in two out of 15 patients who had replicative hepatitis C virus infection and psoriatic arthritis. The inhibition of hepatitis C virus- related apoptotic cell death and the suppression of viral replication mediated by inflammatory cytokines including TNF-alpha may explain the positive effect of these drugs on liver function tests.[27],[28]

According to a recent guideline on systemic anti-psoriatic therapy, conventional drugs including methotrexate, acitretin and cyclosporine are contraindicated in patients with severe liver disease whereas TNF-alpha inhibitors and ustekinumab are not.[6] Apart from psoriasis, TNF-alpha inhibitors have been used in patients with inflammatory bowel disease and cirrhosis and also in primary biliary cirrhosis.[11],[12],[13],[29],[30],[31] The literature regarding the safety of TNF-alpha inhibitors in the presence of cirrhosis with either psoriasis or inflammatory bowel disease is sparse and limited to case reports. Similarly, the data on the safety of ustekinumab in the setting of cirrhosis is lacking and it may cause reactivation of hepatitis B virus and hepatitis C virus infection.[32]

Any patient with liver disease should be referred to a gastroenterologist before initiating TNF-alpha inhibitor therapy. As the available information provides limited data on safety, the possible risks and benefits of using these drugs in patients with cirrhosis should be evaluated on an individualized basis before initiating treatment. Special attention must be paid to infectious adverse effects as these patients are at a higher risk. They should be regularly followed up and closely monitored with good collaboration between the dermatologist and gastroenterologist.

The present case series provides data on the long-term use of TNF-alpha inhibitors in patients cirrhosis with. Although large-scale, controlled studies are necessary to assess the long-term safety and efficacy, it is difficult to design such studies due to ethical concerns. Post-marketing surveillance data may provide more information on this topic.