Ultrasound assessment of enthesis thickness in psoriasis and psoriatic arthritis: A cross-sectional study

Enthesitis is an inflammation at the insertion of ligaments, tendons, or joint capsules to bone. It is a typical feature of spondyloarthritis (SpA), a family of inflammatory rheumatic diseases including psoriatic arthritis that share common clinical features as dactylitis, peripheral arthritis, and involvement of spine joints.[1],[2]

Enthesitis is the earliest event in the course of psoriatic arthritis and could be the only clinical manifestation of the disease.[1] Enthesitis has been hypothesized to be the result of an exaggerated innate immunity response that plays a pivotal role in directing the subsequent adaptive immune response.[3] The clinical assessment of enthesitis is predominantly performed by eliciting tenderness at the entheses' sites. Specific clinical tools have been validated to assess enthesitis such as the Leeds Enthesitis Index (LEI) and the Maastricht Ankylosing Spondylitis Enthesitis Score (MASES).[4],[5]

However, an entheseal involvement is often misdiagnosed and undertreated in many psoriasis patients.[6]

Musculoskeletal ultrasound in combination with power Doppler is a valid and reliable technique for the diagnosis and follow-up of patients with psoriatic arthritis with enthesis involvement.[7],[8],[9]

Methodological complexity and inter-observer variability are the main factors that limit the use of the above cited scores in clinical practice. Furthermore there is no clarity on the meaning to be attributed to each elemental lesion, and which of these best discriminate between inflammatory and degenerative processes affecting the osteotendinous junction.[7],[9],[11],[12],[13]

In our experience, the ultrasound measurement of the enthesis thickness represents the best tool for the assessment of enthesitis for several reasons: (i) the thickening may be considered an early sign of inflammation compared to the presence of hypervascularization, calcifications, and erosions; (ii) it is an operator-independent method; and (iii) finally it is reliable and easy to use.[14],[15]

Aim of the study

The aim of the present study was to compare the ultrasound measurement of the thickness of 8 enthesis sites between patients with psoriatic arthritis, only skin psoriasis, and healthy controls, to verify if it is an effective and reliable tool for improving diagnostic accuracy, especially in patients without clear clinical signs of enthesitis. Our ultrasound assessment included the evaluation of two sites never considered so far: (i) the lateral epicondyle of the elbow and (ii) the medial epicondyle of femur.

This was a cross-sectional study conducted in a cohort of patients attending our outpatient dermatology clinic for psoriasis in Rome.

The study was approved by the local ethics committee and was conducted in accordance with the ethical principles of the Declaration of Helsinki.

Demographical, clinical, and treatment-related characteristics of the study population are shown in [Table - 1]. 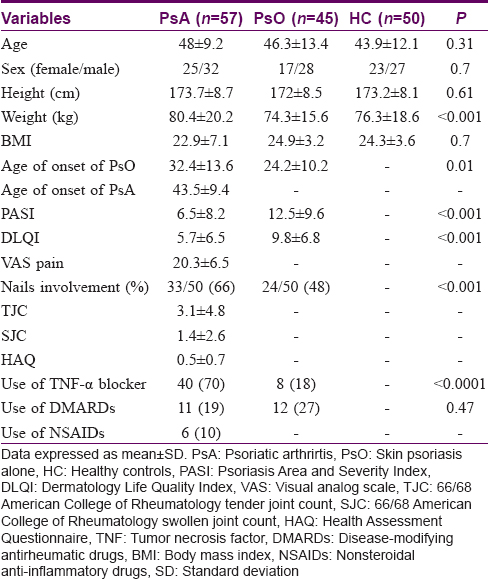 Table 1: Characteristics of the study population

Forty-five consecutive patients with only skin psoriasis and 57 with psoriatic arthritis (without clinical signs of active enthesitis) were examined between December 2014 and December 2015. The diagnosis of inflammatory arthritis was made by the consultant rheumatologists (GD and CMS) based on detailed history and physical examination. Patients were classified as affected by psoriatic arthritis in agreement with CASPAR criteria.[16] The diagnosis of skin psoriasis was confirmed by a trained dermatologist (BC).

All patients with psoriatic arthritis were under systemic therapy at the time of ultrasound examination – 40 with biologic DMARDs, 11 with conventional DMARDs, and 6 with NSAIDs.

Twenty of 45 only skin psoriasis patients were under systemic treatment, and the others were treated only with topical medications or UVB.

Patients with clinically active enthesitis (defined as tenderness and/or swelling at the site of an enthesis) were excluded to better explore subclinical entheseal involvement.

Fifty age and sex-matched individuals selected from the hospital staff served as healthy controls. All participants gave their signed informed consent before inclusion in the study.

All ultrasound examinations and entheses thickness measurements were performed by a rheumatologist, blinded to clinical diagnosis, (DG) using a MyLab70 (EsaoteSpA, Genoa, Italy) equipped with a 6–18 MHz broadband linear transducer.

Entheseal thickness was measured at the point of maximal thickness, 2 mm proximal to the bone insertion, and the sum of the thickness of the 8 entheses of each patient was calculated and stored (thickness total score).

The presence of enthesophytes was assessed using a semi-quantitative score from 1 to 3 for each enthesis according to previous studies and the total obtained for each patient yielded a calcification score.[6],[9]

Bone erosion was defined as an interruption of the cortical bone assessed in both longitudinal and transverse planes.

The normal ultrasound features and thickness of the entheses examined have been previously described.[7],[9],[17],[18]

Power Doppler settings were standardized with a Doppler frequency of 8 MHz and pulse repetition frequency of 0.5 kHz.

The sample was not sized for a powerful statistical analysis so, results should be interpreted cautiously. Continuous variables were described as median (range) or mean ± SD according to the distribution. Comparisons among different groups were carried out using Kruskal Wallis analysis (KW), the Mann–Whitney U-test and Pearson's Chi-square as necessary. Pearson coefficient was used for correlations. In all statistical analyses, significance was defined as P < 0.05. Statistical analyses were performed using the GraphPad Prism 5.02 version (GraphPad software Inc, La Jolla, CA, USA).

Differences in enthesis thickness across the groups

The respective differences in enthesis thickness have been summarized in [Table - 2]. 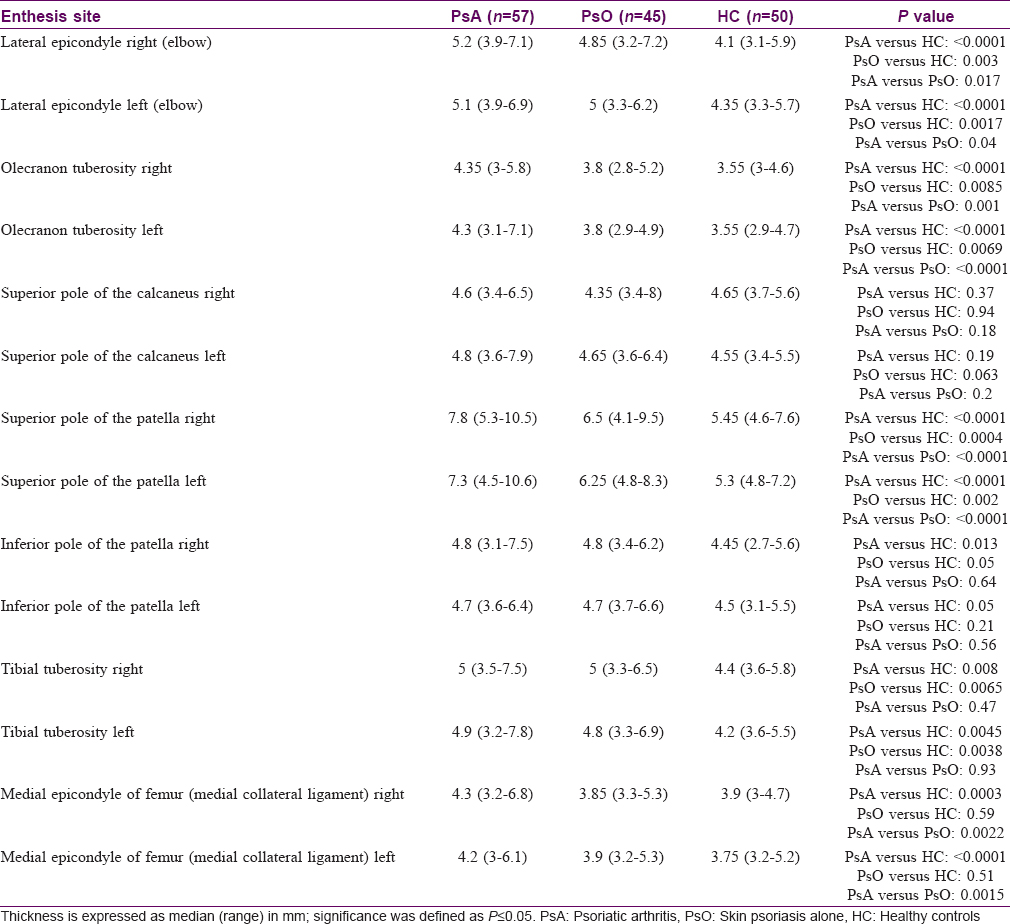 The comparative analysis of the calcification score across the three groups and the bone erosion count is summarized in [Table - 3].

It is important to note that the average thickness of the entheses affected by bone erosions increased compared to the normal values [Table - 4].

Ultrasound has a relevant role in the diagnosis and management of psoriatic arthritis mainly owing to its capacity to diagnose clinically undetectable arthritis and enthesitis. Moreover, previous reports have indicated the usefulness of ultrasound in detecting signs of enthesitis in only skin psoriasis patients without clinical signs of inflammatory arthritis.[8],[9],[10],[13]

The purpose of our study was to clarify whether ultrasound measurement of enthesis thickness allows differentiation of patients with only skin psoriasis from psoriatic arthritis patients with asymptomatic enthesitis.

In our opinion, the thickness measurement represents the most reproducible method for assessing the inflammatory enthesitis. In fact, the power Doppler signal may not be detected even during the course of inflammation, especially in the very early stages of the disease. On the contrary, findings such as calcifications or erosions are expression of chronic inflammation and irreversible damage.[11],[12],[19]

Our analysis showed (for the first time), that the major differences in thickness between psoriasis cases with and without psoriatic arthritis were at the following enthesis sites: (i) olecranon tuberosity and (ii) superior pole of the patella [Table - 2]. Therefore, these two should be regarded as critical when scanning for enthesitis by ultrasound in psoriatic patients. Regarding the comparative analysis of the entheseal thickness between only skin psoriasis and healthy controls, we found statistically significant differences at the lateral and medial entheses of the elbow at the level of the superior pole of the patella and at the tibial insertion of the patellar tendon.

Our data is consistent with the hypothesis suggested by recent studies that a subclinical involvement of tendons and entheses is present in these patients.[10],[14]

From a histopathological viewpoint, the tendon thickening detected by ultrasound may be explained by the disorganization of the normal fibrillar architecture, which is already present in the very early stages of the disease, as reported in recent studies.[2]

Another novel finding of the present study was the measurement of the thickness of the medial collateral ligament at the site of the femoral origin. Although the clinical relevance of the above-mentioned site is emphasized by the fact that it is included in the Leeds score, it has never been investigated by ultrasound in either only skin psoriasis or psoriatic arthritis. Our ultrasound data shows that the thickness of enthesis at this site is increased in psoriatic arthritis, but not in only skin psoriasis and healthy controls [Table - 2]. It may be noted that this site was the only one where there were no thickness differences between only skin psoriasis and healthy controls [Table - 2]. The significance of this last finding is at present unknown.

In particular, in psoriatic arthritis patients the highest enthesis thickness was seen in areas where bone erosions were also present. These findings together with the data of a correlation between the enthesis thickness and the degree of calcification may indicate that thickening is an alteration closely linked to damage of the enthesis [Figure - 1].

Once again, the medial epicondyle of femur was the commonest site of involvement in psoriatic arthritis because erosive changes were seen in 50% of the patients studied [Figure - 2].

The most important limitation of our study was the small sample of patients studied. In addition, the results do not include a comparative analysis with data from patients with clinically evident signs of enthesitis. This reinforces the need of longitudinal studies aimed to validate our preliminary observations.

Our results clearly demonstrate the existence of significant differences in the enthesis thickness between psoriatic arthritis and only skin psoriasis, even in sites never considered previously.

The present study confirms that the ultrasound measurement of enthesis thickness is a reliable and accurate method to evaluate in clinical practice; the degree of enthesis involvement in psoriasis patients especially in absence of clear signs of enthesitis detectable on clinical examination.