Ultraviolet-A1 phototherapy in Asian skin: A review of 159 cases in Singapore

Background: Ultraviolet-A1 phototherapy has been used to treat many inflammatory dermatoses.
Aims: To determine the efficacy and safety of ultraviolet-A1 phototherapy in Asian skin.
Materials and Methods: We performed a review of records of patients undergoing ultraviolet-A1 phototherapy at our dermatology unit in Singapore from January 2007 to January 2011. Their electronic medical records were reviewed and a standardized questionnaire was filled up for data collection and tabulation. Chi-square or Fisher's exact tests were used to compare the difference in response between various groups for each characteristic. P value of < 0.05 was considered statistically significant.
Results: Our study comprised of 159 patients, of which 103 were patients with hand and foot eczema, 21 with atopic dermatitis, 17 with scleroderma and the remaining with miscellaneous dermatoses. Of these patients, 47.6% of patients with hand and feet eczema had good response after 10 sessions, which increased to 75% after 20 sessions and to 84.6% after 30 sessions. After 10 sessions, 47.6% of patients with atopic dermatitis had good response, which increased to 66.7% after 20 sessions. After 30 sessions, all the three remaining patients with atopic dermatitis experienced good response. For patients with scleroderma, only 11.8 and 10% had good response after 10 and 20 sessions, respectively, which increased to 40% after 30 sessions.
Limitations: Limitations of our study include its retrospective design and, consequently, the lack of standardized treatment protocol, as well as subjective assessment in terms of clinical improvement.
Conclusions: Ultraviolet-A1 phototherapy appears to be efficacious for the treatment of hand and foot eczema as well as atopic dermatitis. However, in patients with scleroderma, the response was partial and needed a longer duration of treatment.

Action of ultraviolet-A1 phototherapy is thought to be mediated through activation of various cellular pathways, including induction of apoptosis of B and T lymphocytes, suppression of proinflammatory cytokines such as interleukin 12 and tumor necrosis factor-alpha, increased levels of collagenase expression in fibroblasts, activation of light-dependent mechanism of DNA repair, as well as modification of endothelial regulation and transformation resulting in neovascularization.[26],[27],[28],[29],[30]

We performed a review of all patients who received ultraviolet A1 phototherapy at our center over a 4-year period from January 2007 to January 2011. Their electronic medical records were reviewed and a standardized questionnaire was filled up for data collection and tabulation. The following information was collected and analyzed: patient demographics including age, sex, race and Fitzpatrick skin type; disease characteristics including diagnosis, duration of the disease and prior treatment received; treatment factors including duration of ultraviolet A1 phototherapy, initial frequency of treatment, starting and final doses of ultraviolet A1, number of sessions before improvement seen, cumulative dose, total number of sessions received, any concomitant therapy received as well as adverse effects experienced. Clinical photographs were reviewed if available [Figure - 1] and [Figure - 2]. This study was approved by the Institutional Review Board.

Patients were treated with low dose (<50 J/cm2), medium dose (50–90 J/cm2) or high dose (100–130 J/cm2) ultraviolet A1 phototherapy; frequency of treatment varying from once to thrice weekly. Frequency, duration and cumulative dose of ultraviolet A1 treatment were determined by the skin condition based on a standardized dosimetry protocol. Irradiation source used was Daavlin SL3000 (Daavlin, Bryan, OH, USA). Ultraviolet radiation spectrum was between 340 and 440 nm with a peak at 375 nm.

Clinical response after 10, 20 and 30 sessions of ultraviolet A phototherapy was categorized into two groups for analysis: poor to fair (0–50% improvement) and moderate to good (50–100%). Bivariate analyses using Chi-square or Fisher's exact tests (for cell count <5) were used to compare the difference in response between various groups for each characteristic. P value of < 0.05 was considered statistically significant. Statistical analysis was performed using STATA® version 14.

A total of 199 patients received ultraviolet A1 phototherapy during this period for various skin diseases. Of these, 40 patients (20.1%) were lost to follow-up or discontinued treatment after completing less than 10 treatment sessions for reasons other than worsening of their skin disease and were excluded from the study. The reasons for defaulting were lack of time (n = 8), distance constraints (n = 3), poor response (n = 4), switching to a different treatment modality (n = 4), itching experienced during phototherapy (n = 2) and side effect of skin-tanning (n = 1). Eighteen patients defaulted due to unknown reasons. Patients who stopped after <10 treatment sessions owing to worsening of their skin disease were included. The patient cohort comprised the remaining 159 (79.9%) patients. 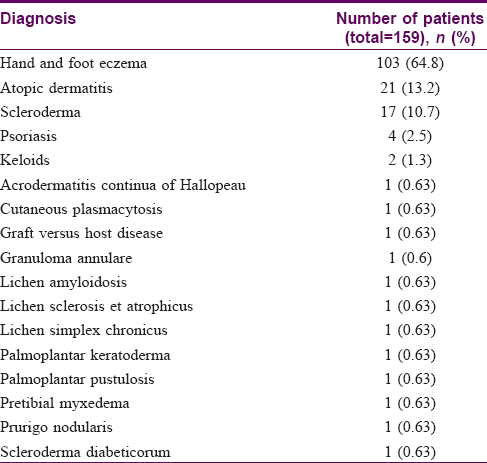 The median duration of treatment was 15 weeks (range 3–188 weeks) with a median cumulative ultraviolet-A1 dosage of 1345 J/cm2 (range 210–18300 J/cm2). Based on our center's standardized dosimetry protocol, almost all patients (n = 156, 98.1%) were started at low dose of ultraviolet-A1 phototherapy (<50 J/cm2). The initial frequency of treatment was twice-weekly for the majority of patients (n = 121, 76.1%), once per week for four patients (2.5%), three times per week for 31 patients (19.5%), four times per week for one patient (0.63%) and five times per week for two patients (1.26%). We titrated the ultraviolet-A dose received based on response and adverse effects from therapy. Assessments of response and adverse effects from therapy were made before each treatment session by a trained nurse at the phototherapy unit and at three-monthly intervals by a trained dermatologist. Adjustments to the ultraviolet-A dose received were performed. Twenty four patients (15.1%) had low (<50 J/cm2), eighty seven patients (54.7%) had medium (50–90 J/cm2) and 49 patients (30.2%) had a high (100–130 J/cm2) final dose. The ultraviolet-A1 dosimetry used is summarized in [Table - 2]. 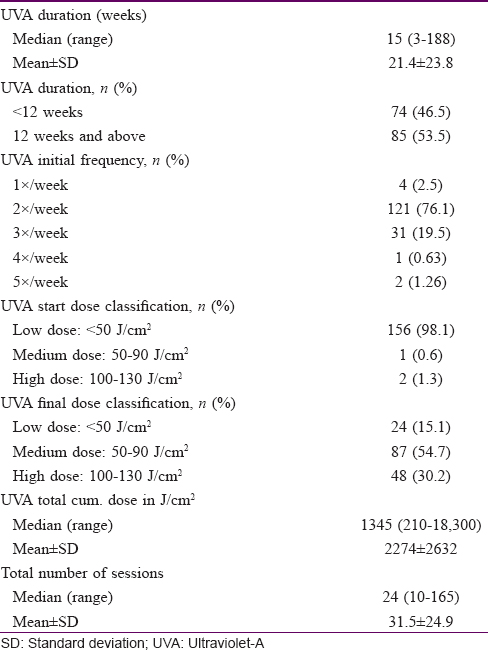 The clinical response to ultraviolet-A1 phototherapy is summarized in [Table - 3].

As patients with hand and foot eczema was the group most commonly treated with ultraviolet-A1 in our study, further analysis was carried out to determine their response to different dosing regimens.

Results of ultraviolet-A1 treatment in other skin conditions

The response of other cutaneous disorders to ultraviolet-A1 treatment was more variable. As we had only two patients receiving ultraviolet-A1 treatment for keloids and one patient in each of the other disease categories, we are unable to make definitive conclusions regarding the efficacy of ultraviolet-A1 phototherapy in these diseases. Of the two patients with keloids, only one had fair response after 18 sessions whereas the other had poor response after 32 sessions. Poor response was also seen in patients with lichen amyloidosis, lichen sclerosus et atrophicus, prurigo nodularis, graft versus host disease, pretibial myxedema and cutaneous plasmacytosis. The patient with acrodermatitis of Hallopeau showed fair response. A moderate response was seen in the patient with palmoplantar pustulosis, whereas one patient with palmoplantar keratoderma and another with lichen simplex chronicus showed a good response.

The most common indications for treatment with ultraviolet-A1 phototherapy in our study were hand and foot eczema, atopic dermatitis and scleroderma. In terms of patient composition, the majority of our patients (64.8%) received ultraviolet-A1 phototherapy for hand and foot eczema. This was in contrast to earlier studies published from the United States and Europe, where the majority of patients had morphea and atopic dermatitis, respectively.[31],[32]

Ultraviolet-A1 phototherapy was generally well tolerated in our study. The most common adverse effect experienced in our study cohort was itching, which occurred in about 66.7% of patients and led to discontinuation of the study in two patients. The proportion of patients experiencing pruritus was more in our study, compared with the study by Tuchinda et al.(15%).,[32] We postulate that one possible reason could be the hotter and more humid environment in Singapore. Other adverse effects experienced by patients in our study included erythema (21.4%), tanning (6.3%), as well as pain (8.2%). During the course of the study, no serious adverse side effects such as skin malignancies were observed, a finding that is consistent with previous studies.[5],[32],[40],[41]

To the authors' knowledge, this study is the largest retrospective study that used ultraviolet-A1 phototherapy in an Asian cohort. Our study limitations include its retrospective design and consequently the lack of standardized treatment protocol, as well as subjective assessment in terms of clinical improvement. There was also a substantial number of patients who were lost to follow-up, leading to difficulties in analyzing the impact of treatment duration on clinical improvement. We attempted to mitigate this impact by analyzing the clinical response of these patients before discontinuation of therapy. Besides hand and foot eczema, atopic dermatitis, scleroderma and psoriasis, our study included very few patients with other dermatoses to draw meaningful conclusions. Studies involving larger number of patients will be required to ascertain the effectiveness of ultraviolet-A1 phototherapy in those conditions.

Our study demonstrated the efficacy of ultraviolet-A1 phototherapy in hand and foot eczema, atopic dermatitis and scleroderma. In hand and foot eczema, clinical response seems to be relatively independent of dose, though a longer duration of treatment correlates with increased treatment efficacy. In atopic dermatitis, a higher dosage of phototherapy may produce a better clinical response. For scleroderma, a longer duration of treatment appears to be required to achieve treatment efficacy.