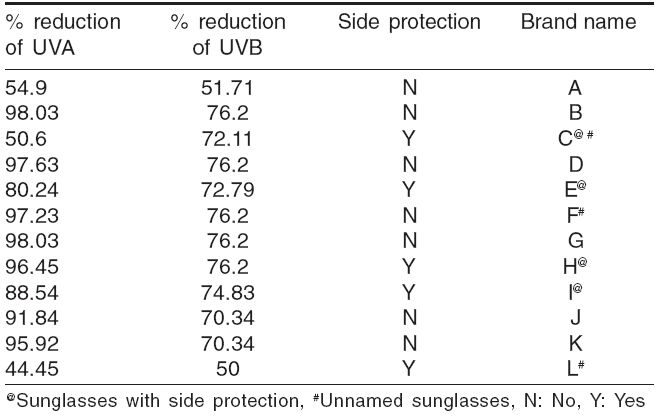 Ultraviolet (UV) rays are known to cause ocular damage, which may be acute, with immediate signs and symptoms. Cumulative UV exposure can cause cataract and damage the retina. Prolonged ocular exposure to UVB is known to cause posterior subcapsular and cortical cataract, pterygium, climatic droplet keratopathy and photokeratitis.[1]

Phototherapy and photochemotherapy are widely used to treat psoriasis, vitiligo and many other dermatoses. Patients receiving PUVA/PUVASOL or UVB therapy are exposed to UV rays for prolonged periods, increasing the risk of eye damage. To protect against this, UV blocking sunglasses are advised during and after UV exposure. While branded and unbranded ultraviolet protective sunglasses (UVPS) are available in the Indian market, most patients use unbranded locally made sunglasses. However, the quality of UV protection they provide from UV rays has not been studied nor is such information available from manufacturers or suppliers.

We studied the efficacy of 16 types of unbranded and branded UV protective sunglasses available in the Indian market in providing protection from UV rays.

Samples of UVPS, both branded and unbranded, available at two representative opticians in Mumbai were collected. Their details, such as brand name, manufacturer′s particulars, price and whether provided with side shields, were noted.

Taking due precautions, one of the authors (AD) measured the baseline UV irradiance with a UV photometer (Lutron-TaiwanTM product nos. L 983506, L 983538 for UVB and UVA respectively). The UV photometer was kept in the center of a UVA and a UVB chamber at a distance of 17 inches from the UV light source. The UVB chamber was a narrow band, full body chamber supplied by M/s DermaIndiaTM (Spiegel UVB 24 series), while the UVA chamber was an octagonal full body chamber supplied by M/s Dermtech InstrumentsTM. Five such readings were noted at various angles in the chamber, each time after exposing the UV photometer to UV rays for 30 seconds and by choosing the maximum constant UV photometer reading. Their average was calculated to arrive at the baseline UV irradiance.

The photosensitive probe of the UV photometer (both UVA and UVB meters were used sequentially) was then covered with each of the UV protective sunglasses to be tested taking care that there was no gap between the probe window and the lens. An average of five such readings, were taken for each sunglasses. Such readings were taken for both UVA and UVB (narrow band) chambers. The percentage reduction of UV rays was calculated. The percentage reduction in UV irradiance was compared by tabulating the results. The results were summarized using statistical measures of dispersion.

Of the 16 UV protective sunglasses studied, four were manufactured by well-known companies, while twelve were locally made, including three unnamed ones. Five of the sunglasses had side protection.

Since 8-methoxypsoralen (8-MOP) remains not only in the skin but also in the lens of the eye after PUVA treatment, wearing protective sunglasses only during UV irradiation is not sufficient; patients have to wear them outdoors as well.[1] Sunlight and PUVA bulbs have a similar irradiance in the UVA waveband.[2]

Both tinted and clear UVPS are available for protection against UV rays. Wearing tinted UVPS may be inconvenient because they can interfere with color perception, reduce definition in conditions of low background light and may be cosmetically unacceptable.[3] Nearly all the commercially available UVPS in India are colored, thus reducing the intensity of visible light entering the eye; hence, the pupils remain dilated, resulting in more UVA rays reaching the lens, which would not happen with uncolored or untinted sunglasses.

The efficacy of sunglasses in protecting against UV rays depends on their size, shape, wearing position and reflection from the posterior lens surface.[4] Small sunglasses may not offer ideal UV protection. Similarly, fancy shapes that allow light to enter from the sides or ill-fitting sunglasses afford poor protection. Internationally, the Australian Sunglass Standard, first published in 1971, recommended that UVPS should be made of materials that are not flammable and with an optical quality similar to that of prescription spectacles. The European Sunglass Standard is followed in European countries.

In a study of 32 pairs of inexpensive UVPS, Rosenthal et al . found the transmission of UVB rays through these sunglasses to be less than 2%.[5] However, in measurements performed with mannikins wearing the UVPS, up to 14.1% of the incident UVR had passed through the eyes. Moreover, when the UVPS were moved 6mm from the forehead, the percentage of light reaching the eyes increased alarmingly up to as much as three-fold.[5] These facts indicate that the UV protection provided by UVPS is not absolute and that the eyes should be closed at all times during exposure in a UV chamber.

These findings are similar to those of Leow et al . from the National Skin Centre, Singapore, who, in a study of 34 pairs of UVPS, found that expensive brands do not guarantee optimal UVA protection.[6] Similarly, Semes et al . found no association between UVA absorbance and lens material or cost.[7] Velpandian et al . studied the UV protective properties of sunglasses available in the Indian market and concluded that 75% of them did not satisfy the protection criteria laid down by the US FDA.[8]

Hence, it can be concluded that both branded and unbranded sunglasses may be used during phototherapy. Branding is no proof of protection from UV rays. The efficacy of these sunglasses should be assessed by the simple method using a photometer that we have mentioned. With practice, the readings and calculation for one pair of UVPS take only 5 min.

The variability in the UV protection properties of the UVPS examined in this study is alarming. This indicates a need for developing a mechanism for certification of standards of quality of these sunglasses for purposes of phototherapy. The United States, the United Kingdom, Germany, Australia and France have standards for UVPS. AS/NZS 1067 is the only mandatory sunglass standard in the world. The Australian Radiation Protection and Nuclear Safety Agency (ARPANSA) developed an eye protection factor (EPF) where UVPS that comply with AS/NZS 1067:2003 can be assigned an EPF rating from 1 to 10. The UVPS with EPF values of 9 and 10 transmit almost no UVR. The Bureau of Indian Standards has standards only for eye protection gear for miners. We recommend that they add guidelines for the quality of UVPS and offer certification for it[9].