Unilateral nevoid hyperkeratosis of the nipple: A report of two cases 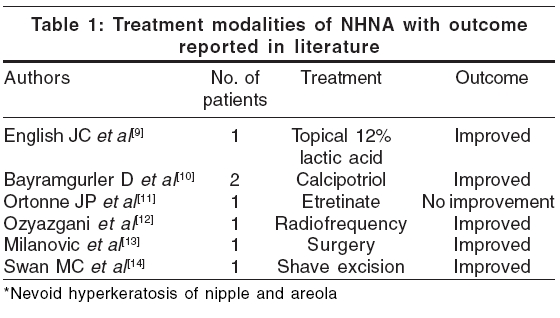 Nevoid hyperkeratosis of nipple and areola (NHNA) is a rare condition, in which the skin of the nipple and/or areola becomes diffusely thickened, hyperpigmented, and covered with filiform or papular warty excrescences.[1] We report two female patients with this rare condition.

Case 1 A 31-year-old married woman noted a change in the appearance of the left nipple since 2 years, accompanied initially by mild itching. There was no history of discharge from the nipple. She had delivered a baby boy a year ago. Despite difficulty in breastfeeding from the affected side, she had continued to breast-feed the baby for nine months after the delivery. She was not taking estrogen preparations. She had applied topical steroids and antifungal agents without any improvement.

On examination, the left nipple showed a warty surface and mild scaling [Figure - 1]. There was minimal induration, and no tenderness. There was no discharge or lymphadenopathy. There were no changes in the areola. Breast examination was normal. The right nipple was normal. A skin biopsy taken from the left nipple showed hyperkeratosis, acanthosis, papillomatosis, and keratotic plugging [Figure - 2]. She was treated with topical tretinoin 0.025% cream at night, and an emollient in the morning, without any significant change at the end of one month.

On examination, there was a brown warty, indurated plaque on the left nipple [Figure - 3]. There was no tenderness, discharge, or lymphadenopathy. Breast examination was normal. The right nipple was normal. A skin biopsy was taken from the left nipple, and showed irregular acanthosis, papillomatosis, hyperkeratosis, and focal hypergranulosis. There was a dense lymphocytic infiltrate in the dermis. The patient was treated with topical 0.05% tretinoin cream, but there was no significant improvement after one month.

In 1938, Levy and Frankel described three distinct types of hyperkeratosis of the nipple and areola.[1],[2] Type I was hyperkeratosis as an extension of an epidermal nevus, type II was hyperkeratosis associated with other dermatoses (e.g., acanthosis nigricans, icthyosis, lymphoma, chronic eczema, seborrhoeic keratosis or Darier′s disease), while type III was nevoid hyperkeratosis, not associated with an epidermal nevus or other dermatoses.[2] Perez-Izquierdo suggested an alternative classification of two types: idiopathic or nevoid, and secondary. The latter is due to local factors like acanthosis nigricans, verrucous nevus, seborrheic keratosis; ichthyosis, Darier′s disease, chronic eczema or systemic factors like lymphomas, or drug related e.g., diethylstilbestrol and spironolactone.[1] Mehanna et al . suggested that the term ′nevoid′ should be replaced by ′idiopathic.′[3]

Nevoid hyperkeratosis of the nipple or areola is a rare, idiopathic disorder with approximately 50 reported cases. Although it affects both men and women, approximately 80% of cases occur in women.[4] It presents as hyperkeratotic, hyperpigmented plaques of the nipple and areola. It may also present as a verrucous lesion.[4] There are several reports of unilateral nevoid hyperkeratosis,[5] but the lesions are often bilateral. They may involve the nipple, areola, or both. Of the 45 cases of nevoid hyperkeratosis reviewed by Kubota et al , 17% involved the nipple, 25% the areola, and 58% both the nipple and the areola.[7] The lesions are generally asymptomatic, but occasionally they may be itchy.[5] Difficulty in breast-feeding has been reported.[6]

The etiology of NHNA is not known. A change in estrogen levels has been thought to precipitate this condition.[8] The histopathological changes include orthokeratotic hyperkeratosis, papillomatosis, acanthosis, keratotic plugging, and mild perivascular lymphocytic infiltrate in the dermis.[2] The differential diagnosis of NHNA includes epidermal nevus, acanthosis nigricans, chronic eczema, atopic eczema, seborrheic keratosis, Darrier′s disease, Paget′s disease, basal cell carcinoma, dermatophytosis, and Bowen′s disease.[2] There is no definite treatment for this condition. Various modalities such as topical corticosteroids,[2] tretinoin, keratolytics,[9] calcipotriol,[10] etretinate,[11] radiofrequency,[12] surgery,[13] and shave exicision[14] have been tried [Table - 1].

We made the diagnosis of unilateral nevoid hyperkeratosis of nipple, based on clinical and histopathological features. Though the nipple shows minimal changes, the changes were significant when compared with the normal right nipple. Prolonged friction and rubbing of nipple can induce thickening and hyperkeratosis (jogger′s or cyclist′s nipple).[1] This can mimic NHNA. However, our patients had minimal itching in the initial stage, and there was no history of chronic scratching or rubbing of the nipple. There had been no response to the application of a topical corticosteroid in the past. In both patients, histopathology showed benign epidermal hyperproliferative changes; there was no evidence of pre-malignant or malignant changes. Treatment with topical tretinoin had no effect on the lesion.

We report these two patients of nevoid hyperkeratosis of the nipple and areola for the rarity of this condition. Although there is only one case of NHNA reported from India,[15] the condition may be under-reported because of lack of awareness.