We report a 3-year-old girl born with fair complexion which became darker. The color change was insidious in onset at the age of 5 months, asymptomatic and progressive involving the entire body surface. Histopathology revealed increased pigmentation of the epidermal basal layer. Universal acquired melanosis is a rare form of hypermelanosis which was synonymously referred to as "Carbon baby". This is a rare presentation with only one earlier case report.
Keywords: Carbon baby, Progressive pigmentation, Universal acquired melanosis 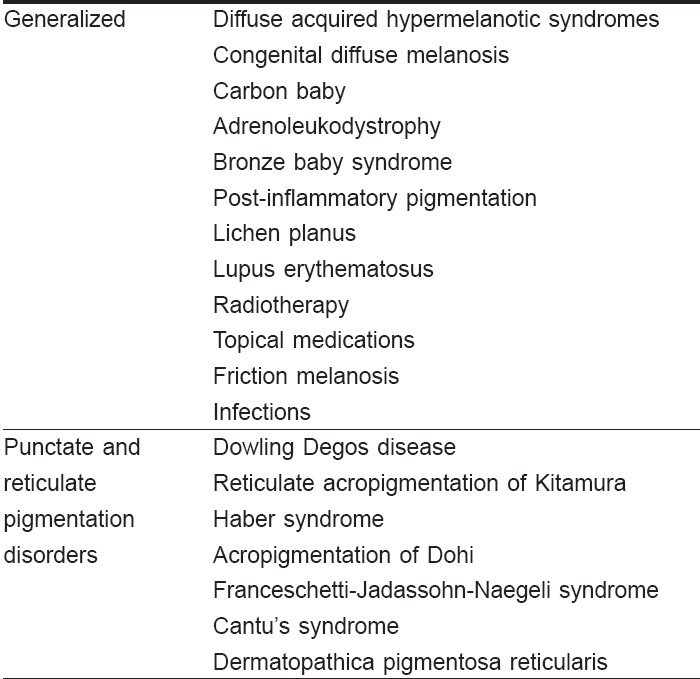 Melanin production normally is not maximal in the newborn skin. As a result, all babies, irrespective of race, may look slightly tanned or red in color at birth. Within the first few weeks racial color becomes more evident because melanin production is stimulated by exposure to light. Our patient presented with diffuse hyperpigmentation which was progressive from the age of 5 months. There was no family history of a similar problem. This case is presented for its unusual occurrence.

A 3-year-old female child born to non-consanguineous parents was brought to the dermatology department with history of generalized increase in pigmentation. Her mother had an uneventful prenatal, natal and postnatal period. The darkening of skin was first noticed over the feet and face at the age of 5 months and gradually progressed to involve the entire body. There was no history of drug intake prior to the onset of skin lesions, no history of discoloration of urine or photosensitivity. Past and family history was unremarkable, the elder sibling who was six years old, was normal.

On examination the child had generalized, diffuse, dark-black hyperpigmentation of the skin [Figure - 1]. Palms and soles showed mild grayish discoloration. Pigmentation was also present over the oral and buccal mucosa, sparing genital mucosa. Face showed patchy areas of normal skin. The hair was normally pigmented with thick straight terminal hairs and did not show color or shaft abnormalities. The sun-exposed areas were darker than sun-protected areas. The skin texture and sweat secretion were normal. There was no other evidence of primary or secondary skin changes. Growth parameters and milestones were within normal limits. The physical and mental development was normal. Ophthalmological examination did not reveal evidence of melanosis oculi or conjunctiva and the fundus was normal. Systemic examination was also within normal limits.

Routine investigations including urine for amino acids did not reveal any abnormality. Liver function tests were within normal limits. Serum adrenocorticotropin hormone (ACTH) was 37 ngm/liters at 08.00 hours and 37 ngm/liters at 18 hours. Beta melanocyte stimulating hormone was 0.5 ng/dl. Thyroid function tests were normal. Skin biopsy was done from hyperpigmented skin on the thigh, which revealed excessive melanin pigmentation of the basal and supra-basal layers of the epidermis with melanophages in the dermis. There was no alteration in the shape or size of melanocytes for this site. The number of melanocytes were calculated and found to be approximately was 3880/mm 2 . Chromosomal studies could not be carried out for want of facilities. On the basis of clinico-histopathological features a diagnosis of "carbon baby" was made.

There are multiple causes of diffuse hyperpigmentation of the skin in infancy [Table - 1]. Classifications based on both clinical and histological findings increase the accuracy of diagnosis. [1],[2]

Generalized pigmentation in a child may be seen in a variety of disorders which can be clinically differentiated.

Ruiz-Maldonado described a single case of a striking variant of progressive hyperpigmentation in which a child developed pigmentation at the age of three months and was jet black over his entire body by the age of 4 years, prompting the authors to name him "carbon baby". Histological examination of this patient revealed heavy melanin deposition throughout the epidermis with minimal dermal pigmentation. There was no increase in melanocyte number, thus there was extraordinary melanin production by this normal-appearing melanocytes. [3] Our patient also developed pigmentation at the age of five months and developed progressive pigmentation in another 2 years. Skin biopsy revealed excessive melanin pigmentation of basal and supra-basal layers apart from melanophages in the dermis.

Furuya and Mishima reported a Japanese child with progressive pigmentary disorder. This child developed hyperpigmentation at the age of 3 months. At 4 years of age the child was mentally retarded with partial hyperpigmentation of the body. Biopsy revealed hyperkeratosis, papillomatosis and proliferation of melanocytes. [4] Our patient shared the clinical features of progressive pigmentation as that of the above report, but in our patient pigmentation developed faster and was not associated with mental retardation. Histopathology also did not reveal hyperkeratosis and papillomatosis.

Kint et al., described two cases of congenital diffuse melanosis in which the patients developed hyperpigmentation shortly after birth which invaded progressively the trunk and limbs. The pigmentation was diffuse on the abdomen but reticulated on the neck and groin. On electron microscopy they found the melanosomes were not grouped within the keratinocytes but dispersed within the cytoplasm of the epidermal cells. [6] Our patient developed pigmentation later in childhood and there was no reticulate pigmentation which excludes this condition.

Adrenoleukodystrophy is an X-linked acquired generalized hyperpigmentary disorder, which has been described in association with a slowly progressive disease of the brain and adrenals of affected children. Patient develops uniform macular hyperpigmentation which spares the palms and groin area. This disease is characterized by the accumulation of unsaturated fatty acids with a chain of 24-30 carbons, particularly hexacosanoate in the adrenal cortex and in certain sphingolipids of the brain. Bronze baby syndrome is a rare acquired generalized pigmentary disorder which occurs in the neonates. It is characterized by gray-brown discoloration which occurs in patients with hepatocellular dysfunction undergoing phototherapy. Porphyrin compound undergoes photo destruction which results in a brown substance that is deposited in the skin. [7]

Our patient did not have any evidence of inflammatory condition and hence postinflammatory causes were not entertained. We also excluded systemic conditions like Addison′s disease, heavy metal toxicity and hemo-chromatosis from the history, clinical features and laboratory findings. Among the punctate and reticulate disorders, Dowling Degos disease presents as an autosomal dominant disorder in adult life. Wilson Jones described it as ′demonstrating dusky dappled disfigurements and dark dot depressions, and disclosing digitate down growths delving dermally′. [8]

In reticulate acropigmentation of Kitamura freckle-like pigmentation appears on the dorsa of hands which spreads all over the body later. It manifests in the first two decades of life. In Haber′s syndrome there is rosacea-like eruption with keratotic plaques and pitted scars. Acropigmentation of Dohi shows symmetrical dyschromatosis of extremities. Franceschetti-Jadassohn-Naegeli syndrome starts as reticulate pigmentation during the second or third year associated with palmo plantar keratoderma and hypohidrosis with intolerance to heat. In Cantu′s syndrome brown macules develop in adolescence on the face, forearms and feet along with hyperkeratosis of palms and soles. In dermatopathica pigmentosa reticularis there is widespread reticulate pigmentation with pigmentary incontinence in histopathology. All these syndromes were ruled out as the pigmentation was not reticulate or punctate in character.

The etiology of pigmentation in our case is as yet unknown. The following hypothesis can be proposed for its occurrence. The role of excessive production of β melanocytes-stimulating hormone, abnormal sensitivity of melanocytes towards normal or abnormal endocrine or nervous stimuli and finally to a genetic mutation, which is not yet detected at the chromosomal level. We are treating our patient symptomatically with sunscreens to protect from UV light.