Use of patch testing for identifying allergen causing chronic urticaria

Background and Aims: The aim of this present study was to evaluate the role of patch testing for the etiological diagnosis of chronic urticaria (CU) by using the Indian standard battery of patch test allergens approved by Contact and Occupational Dermatitis Forum of India (CODFI). Methods: A total of 57 cases with chronic urticaria were tested with the Indian standard battery of allergens. All those cases that showed allergy to patch test allergens were advised to avoid contact with the allergen(s) to whom they had allergy; they were also advised to avoid/restrict allergens in the diet. This avoidance/restriction was advised for a period of six weeks. During this period, clinical improvement of each patient was evaluated and recorded at weekly intervals. Results: Out of the 57 cases of CU, 11 patients showed positive reactions to one or more patch test allergens. Nine out of eleven showed complete disappearance of CU by 2-3 weeks on avoidance of the allergen and this improvement continued till the end of six weeks. The remaining two cases showed partial recovery from CU during the same period. Conclusion: Patch testing is a safe, simple and inexpensive alternative that can be used for the etiological diagnosis of chronic urticaria before undertaking expensive investigations.
Keywords: Contact allergy, Nickel, Patch test, Sensitizer, Urticaria 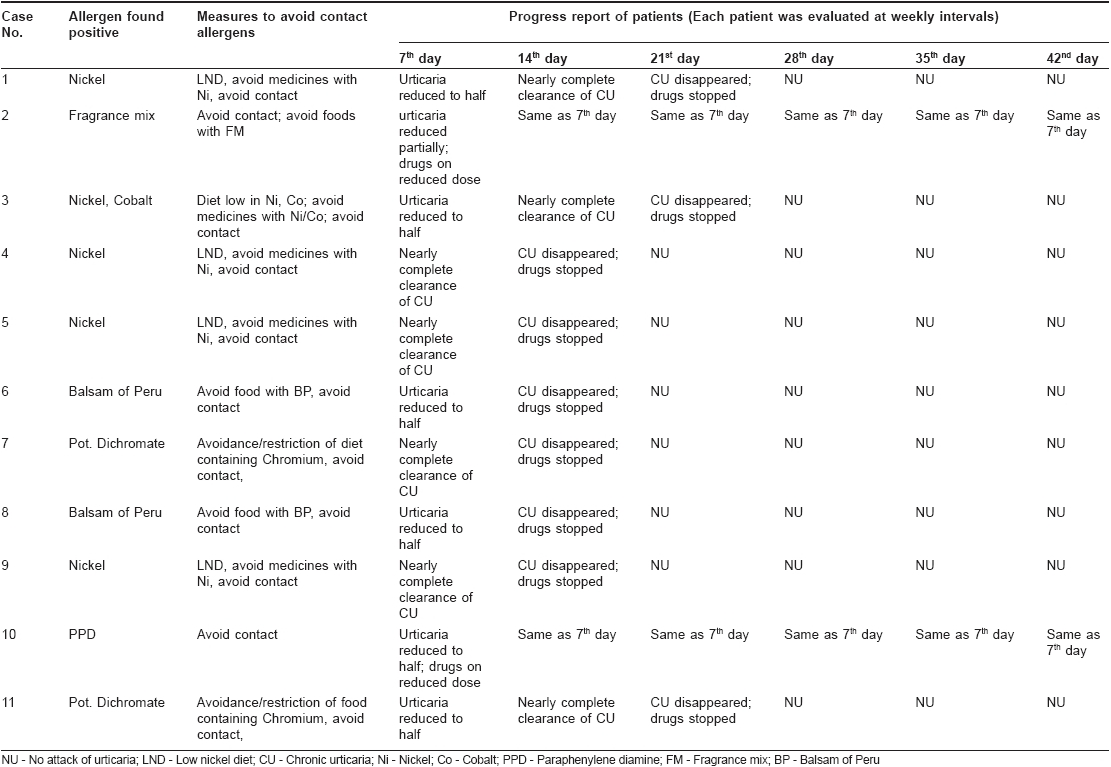 The present study evaluated the role of patch testing for the etiological diagnosis of chronic urticaria by using the Indian standard battery of patch test allergens approved by the ′Contact and Occupational Dermatoses Forum of India (CODFI).

A total of 57 cases with chronic urticaria were included in this study after taking history and clinical examination. Patients with CU associated with physical urticarias and atopic dermatitis and pregnant and lactating women were not included in this study. It was a clinic-based study conducted over a period of five months. A valid written consent was obtained from each patient. Detailed history was taken for possible provocative factors. In addition, inquiries about attacks of contact eczema in the past, any surgical implants/pace maker/dental braces were also made.

The patients were tested with the Indian standard battery of allergens. Patches were applied to the upper back using aluminum patch-test chambers mounted on a micropore tape. All patches were reopened carefully one hour after initial application and examined carefully for the sign of contact urticaria and the patches subsequently reapplied. They were finally removed after two days and readings were taken on days 2, 3 and 4. Grading of the reactions was performed based on the International Contact Dermatitis Research Group (ICDRG) guidelines and only those reactions that persisted till day 3 and beyond were considered to be positive.

All those cases that showed allergy to patch test allergens were advised to avoid contact with the relevant allergen(s) and were also advised to avoid/restrict the allergens in the diet. This avoidance/restriction was advised for a period of six weeks. During this period, clinical improvement of each patient was evaluated and recorded at weekly intervals. All patients were advised to use oral antihistaminic/topical soothing lotion on SOS basis. While designing the diet for these patients, several books/journal/websites were consulted. Amongst these sources, the two most important books were -"The Nutritional Trace Metals" by Conor Reilly and "Management of Positive Patch Test Reactions" edited by Maibach et al. [8],[9]

Out of the 57 cases, there were 22 male and 35 female participants in this study. The youngest patient was an eighteen year-old male and the oldest patient was a 45 year-old housewife. Almost all of them had been extensively investigated for urticaria by different clinicians in the past. All of them had been tested for routine blood count, stool and urine; most of them for blood sugar profile and some of them for liver function. Nine patients were tested for serum Ig E levels and seven patients were tested for thyroid hormone profile (serum IgE and thyroid hormone levels were within normal limits in those tested patients). However, none of these patients had been advised allergy tests like skin prick test and autologous serum skin test for their problem. None of these patients had undergone patch testing for chronic urticaria. These patients had been treated mostly with oral corticosteroids and antihistamines with frequent remissions and relapses. Many of them had also received antibiotics, antihelminthics and topical soothing agents in addition.

None of the 57 cases had experienced any attack of contact eczema in the past. Nor had any of them got any surgical implants/pacemaker/dental braces. During the patch test procedure, all were thoroughly examined for the physical sign of contact urticaria; however none of them had any. Out of the 57 cases of chronic urticaria, 11 patients showed positive reactions to the patch test allergens. Allergy to metals was noted in seven cases; to balsam of Peru in two cases, to paraphenylene diamine (PPD) in one case and to Fragrance mix in another case. Nickel was the most common allergen in this study; five out of 11 cases tested positive with nickel. Only one patient showed contact allergy to multiple allergens (nickel and cobalt) in this series [Table - 1].

Out of the 11 patients who tested positive, five cases experienced exaggeration of urticaria during the period of patch testing. On avoidance of allergen(s), nine out of 11 patients showed complete disappearance of chronic urticaria by 2-3 weeks and this improvement continued till the end of six weeks. The remaining two cases showed partial recovery from chronic urticaria as observed at the end of the 1 st week; no additional improvement was noted in the remaining five weeks. This may be due to allergy to multiple allergens, which were not included in this series or to the co-existence of autoimmune urticaria or to the presence of other provoking factor(s). It was observed that all 11 patients experienced quick relapse of their skin problem as soon as they returned to their normal life style and diet.

Chronic idiopathic urticaria (CIU) could be an extremely disabling and difficult-to-treat condition. The cause being unknown, the management of such CIU is often frustrating. Recent studies in this field have shown that contact allergy can play a role in the etiopathogenesis of chronic urticaria; this has opened a new era in the field of investigation for CIU. Guerra et al. [2] studied and patch-tested 121 patients with chronic urticaria and found 50 of them to be positive (metals: 20; chemicals: 16; stabilizer/accelerators: 5). Measures to avoid contact allergens led to a remission of CU between ten days and one month. It is important to note that of those 50 patients, none had any signs of contact eczema.

In a French study, [3] 21 patients with chronic urticaria were patch-tested and all were found to have nickel allergy; 15 out of the 21 patients developed symptoms after an oral challenge with a nickel salt. A low nickel diet was effective in 11 out of the 15 and it was possible to stop drug treatment in nine patients. In addition, four patients who had nickel-containing dental materials in their mouths had these materials removed and also followed a nickel-avoidance diet. In two out of the four cases, the chronic urticaria disappeared.