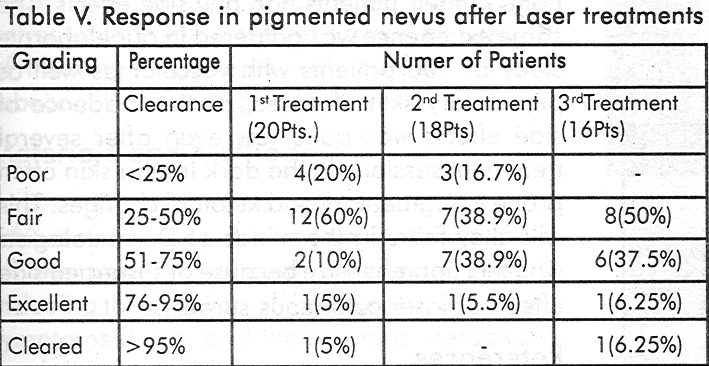 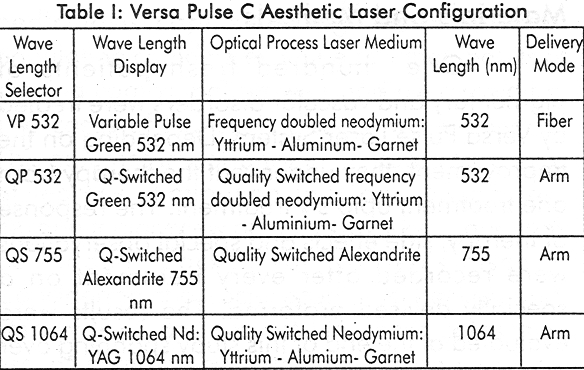 Ever since the discovery of loser by Schalow and Townes in 1958[1] and later Maiman in 1960[2] nearly four decades ago, the laser therapy has revolutionized the therapy of innumerable disorders, in the field of Medicine and Surgery. Newer applications of laser are being reported every day in medical literature. Many diseases till now untreatable, are showing good results. In the field of Dermatology, laser treatment has given hope for treatment of several disorders for which no satisfactory approach was available some years ago. Its efficacy in the treatment of vascular and pigmented skin lesions has revolutionized cosmetic surgery. Chromophores present in the skin absorb most of the laser light falling on the skin. The high energy laser light absorbed by a chromophore generates excess thermal reaction which causes destruction of the light absorbing tissue- a selective thermolysis. Skin lesions can, therefore be treated by a laser emitting a wave length corresponding to the absorption peak of the chromophore contained in the lesion. Length of the time for which the target tissue is exposed to laser light-pulse duration-is very important. Pulse duration should usually be less than the thermal relaxation time. Thermal relaxation time, the time taken for laser light irradiated tissue to lose 50 percent of its incident heat without conducting heat to surrounding tissue, is primarily affected by the diameter of the target tissue.[3],[4],[5]

After acquiring the ultramodern Versa Pulse C Aesthetic Laser System, we have treated and followed up 100 patients of vascular and pigmentary skin disorders, the observations form the contents of this communication.

One hundred fresh patients of pigmentary and vascular disorders were treated by Versa Pulse Laser System. Depending on the improvement, they underwent the therapy from one treatment upto six treatment. The response of therapy, side effects and special observations were recorded after every treatment on a specially devised proforma. The results were evaluated at the end of this study spanning over one year of time. This included those patients as well as who received only one treatment, as the evaluation was recorded after each treatment. However, evaluation of side effects was recorded only in those patients who received no further treatment or refused to pursue therapy.

The Versa Pulse C Aesthetic laser system combines four lasers in one system. It is primarily used to treat vascular and pigmented lesions and tattoos of all colours. It is complete multiple wavelength cutaneous Laser system with an instant selection of three proven Q-switched lasers for pigmented lesions and all tattoo colours. The versa spot QS hand piece is used with all three Q-switched wave- lengths. One can quickly change wavelengths to provide the best treatment for each patient. It also has a new variable pulse width green laser which selectively treats a wide variety of vascular conditions with minimal purpura. The chilled tip delivery actively cools the skin during vascular treatments, reducing or eliminating epidermal thermal damage. Both hand pieces have a unique spot size feature, which automatically adjusts fluence whenever the spot size is changed. Blue/black and green chromophores are best treated with Q- switched Alexandrite (755nm) and Q-switched Nd: YAG (1064 nm) laser, while red and orange chromophores are best treated by Q- switched frequency doubled Nd: YAG (532 nm) laser. Pigment chromophores can be treated with any of the above Q- switched wavelengths. Haemoglobin chromophore requires Variable Pulse Width frequency doubled Nd:YAG (532 nm) laser [Table - 1].

After proper patient selection and priming, the patient was prepared for laser surgery by re-explaining to him or her everything about the procedure and its expected results and side effects. An informed consent of the patient was taken in writing with signature. If an anesthetic cream was applied, it was completely removed with soap and water. Safety goggles were worn by treating personnel and the patient. Hairs were protected with wet gauze or headband.

The haemangiomas were treated with variable pulse width frequency doubled Nd: YAG Laser, using a Variable 1.5 to 10mm spot size, the larger size requires fewer laser pulses in each session and vessels are affected. Initial average densities range from 1.5 to 2.2 J/cm2 with a 8 to 10mm spot size, and for superficial and smaller vessel 2 to 3 mm spot size and 18 to 24J/cm2 and pulse width of 20 ms was used. Q- Switched Nd: YAG laser was used to treat nevus of Ota. Fluences of 3.8-4-4 J/cm2 were used with a 3 mm spot size at 6-8 weeks intervals. An ash- white tissue response is observed on laser impact. Epidermal pigmented lesions are usually initiated at is also effective. Epidermal pigmented lesions are usally initiated at 1.5J/cm2 using non overlaping 5mm laser spots, which produces an immediate ash- white tissue response. If pinpoint bleeding or epidermal rupture occurred on laser impact, the fluence was decreased by 0.02 J/cm2 or more until the desired ash-white response was observed. Q- Switched Alexandrite laser with average energy of 4-5 J/cm2 with a 3 mm spot size are used for common tattoos. The treatment can be modified according to the response of the lesion to different lasers. The repeat treatments are done at the interval of 4 to 8 weeks.

The response of patients with haemangioma who received 1 to 4 treatments is recorded in [Table - 2].

Of the 35 patients of nevus of Ota, only 12 were followed upto 4th treatment [Table - 1]. At the time of recording this article, 2 of them have cleared completely after 6th treatment.

The response in melasma was dramatic in 1 patient who completely cleared after first treatment [Table - 4].

The response in pigmented nevus is given in [Table - 5].

The response to laser treatment in tattoos is given in [Table - 6].

Ever since the advent of laser, research workers[1],[2],[3],[4],[5],[6] have extensively used it in the field of Medicine and Surgery. Versa Pulse Laser system is one of the advanced laser machines which combines 4 lasers in one for optimum benefit in skin laser surgery. These 4 lasers produce laser light which is absorbed, reflected or scattered depending on the wavelength and target tissue. The shorter Variable Pulse Green and Q-Switched Green wavelengths are

selectively absorbed by pigmented tissues, primarily oxyhaemoglobin, haemoglobin, epidermal melanin and tattoo pigments. The oxyhaemoglobin and haemoglobin pigments have strong absorption peak in the ultra violet, blue, green and yellow colour band, making the 532 nm wave length effective in treatment of vascular lesions. The haemoglobin pigment absorbs laser light, resulting in selective photocoagulation reaction of the tissue. On the other, Q- Switched Alexandrite (near infrared) and the Q-Switched Nd: YAG (infrared) wavelength penetrate tissues at greater depths. Thus they escape absorption by epidermal melanin and can treat tattoo pigment, nevus of Ota etc. present in the dermis very effectively in contrast to the previous lasers which can′t reach that deep.

The FD Nd: YAG wavelength is specifically indicated for the treatment of vascular lesions viz angioma and haemangioma (portwine, cavernous, cherry and spider). The achievable aim include haemostasis, colour lightening, blanching, flattening and reduction in lesion size. The Q- Switched FD Nd:YAG wavelength is specifically indicated for the removal of light coloured tattoos (yellow, green and red), treatment of cutaneous lesions, and treatment of benign pigmented lesions viz naevi, lentigenes (solar and senile), chloasma, cafe au lait macules, verrucae, skin tag, keratosis and plaque etc. The Q- Switched Alexandrite wavelength is indicated for the treatment of epidermal and dermal pigmented lesions including nevus of Ota/ ]to, and therapy of multicoloured tattoos (black, blue and green). The Q- Switched Nd: YAG wavelength is specific for the removal of dark coloured tattoos (blue, black), and treatment of pigmented lesions. An epidermal chiller tip accessory is intended for use only with the FD Nd: YAG wavelength to cool or chill the epidermis prior to and during laser treatment of vascular lesions to minimise the thermal injury to nonvascular structures. [Figure - 1]

General contraindications include the preceding history of scarring and keloid formation, indentation and post inflammatory hypo or hyperpigmentation. As not all lesions respond positively to laser treatment, it is advisable to treat a small representative area of the lesion as a test patch and evaluate its results prior to proceeding to full laser treatment. Initial priming of patient with topical agents such as retinoic acid can often improve the results.

Tissue damage can occur due to incurred energy, repitition rate, spot diameter, exposure duration or power application. So an amateur should initially use lowest effective energy setting for the intended application till he or she is able to comprehend the capabilities of the instrument.

The data on the effect of Q- Switched Alexandrite laser in treating 197 cases of Asian skin with freckles by Jang et al[5] revealed that more than 75% patients required an average of 1.5 treatment sessions with 7 J/cm.[2] Significantly, none of their patients had any side effects. The same experience was gathered in our elaborate study of 100 patients with vascular as well as pigmentary skin diseases, as the incidence of side effects was quite low even after several treatment sessions in the dark Indian skin often prone to pigmentary and keloidal changes. This will allay fears in the minds of Dermatologists who feel apprehensive because of suspected side effects of laser cutaneous surgery.