Vitiligo: A part of a systemic autoimmune process

Background : Recent clinical and animal experimental studies postulate that the pathogenetic mechanisms of vitiligo could be of systemic origin as vitiligo is associated with ocular and auditory abnormalities as well as other autoimmune disorders.Hence, we studied genetic factors, systemic associations, ocular and auditory abnormalities of vitiligo. Methods: The study group included 150 new cases of various types of vitiligo. One hundred age- and sex-matched nonvitiligo cases were included as controls in the study. A complete family history was taken for all patients. Examination was carried out taking note of the type of vitiligo and approximate percentage of body surface involved. All relevant laboratory investigations, a thorough audiological examination including pure tone audiometry and a complete ophthalmologic examination were carried out in all patients and controls. Statistical analysis was done using the Chi square test. Results: Fifty-four vitiligo patients (36%) had a family history of vitiligo. Anemia was present in 30 (20%) vitiligo patients but only in five (5%) controls, a difference that was statistically significant (c2 = 15.8, P < 0.001). Diabetes mellitus was present in 24 (16%) vitiligo patients and only 2 (2%) of controls (Chi square, c2 = 12.4, P < 0.001). Hypothyroidism and alopecia areata were present in 18 (12%) and 11 (7.4%) vitiligo patients respectively and none of the controls. Hypoacusis was seen in 30 (20%) vitiligo patients and two (2%) controls (c2 = 8.19, P < 0.005). Twenty-four vitiligo patients (16%) and five controls (5%) had specific ocular abnormalities like uveitis, iris and retinal pigmentary abnormalities (c2 = 7.39, P < 0.001). Conclusion: This study demonstrates statistically significant clinical evidence confirming that vitiligo is a part of systemic autoimmune process.
Keywords: Systemic disease, Vitiligo, Autoimmune

Table 4: Relationship of type of vitiligo with ocular abnormalties

Table 4: Relationship of type of vitiligo with ocular abnormalties 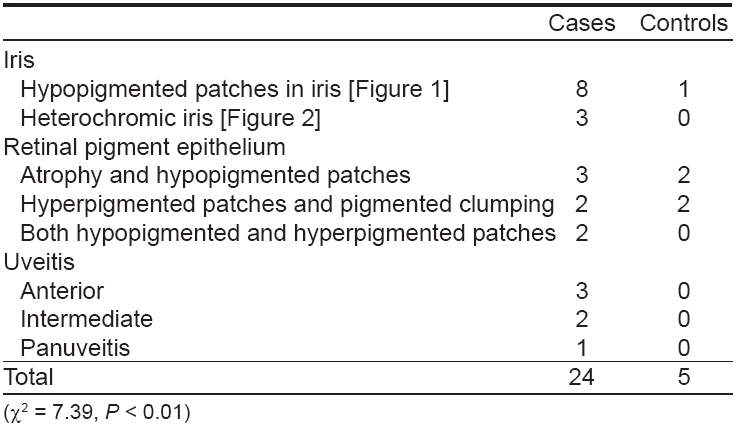 Vitiligo is an idiopathic disease that causes destruction of melanocytes in the skin, mucous membranes, eyes, inner ear, leptomeninges and hair bulbs. [1],[2] Various recent clinical and animal experimental studies [3],[4],[5] support the premise that the pathogenetic mechanisms of vitiligo could be systemic events as vitiligo is associated with ocular [6],[7],[8],[9],[10],[11],[12] and auditory abnormalities [13],[14] and other autoimmune disorders. [2],[3],[12],[15],[16] There have been few studies in India on the ocular and otic abnormalities and the presence of other autoimmune disorders in association with vitiligo. [6],[7],[14] Hence, we undertook a study of the genetic factors, systemic associations as well as ocular and auditory abnormalities of vitiligo.

This study was conducted in the Department of Dermatology, King George Hospital Andhra Medical College, Visakhapatnam between April 2004 and December 2004. The study group included 150 new cases of various types of vitiligo attending the dermatology department. One hundred age- and sex-matched nonvitiligo cases were included as controls in the study . Informed consent from all patients and controls was obtained prior to the study. A complete history was taken including age of onset, duration and family history of vitiligo, genetic pedigree and personal or family history of systemic diseases associated with vitiligo such as anemia, diabetes mellitus, hypothyroidism and alopecia areata from all patients.

A thorough dermatological examination was done and the vitiligo patients were classified into four groups: focal, segmental, acrofacial and generalized vitiligo. Approximate percentage of the body surface involved was calculated using the ′rule of nine′. Presence of cutaneous associations of vitiligo including halo nevi, poliosis of scalp hair or eyebrows, premature graying of hair and K φbner′s phenomenon was noted. All relevant investigations like complete hemogram, serum biochemistry profile, fasting and postprandial blood sugar levels and thyroid profile were carried out in all patients and controls. In all patients and controls, a complete otoscopic examination was done for both ears and the results of tuning fork tests including Rinne′s test, Weber′s test and absolute bone conduction test were recorded.

Pure tone audiometry (PTA) was done using an audiometer equipped to carry out both air conduction and bone conduction tests (Arphi 900© digital audiometer). Pure tone thresholds were estimated for each ear separately at the frequencies of 0.125, 0.250, 0.500, 1.0, 2.0, 4.0, 8.0 KHz for air conduction and between 0.25 and 4.0 KHz for bone conduction. The scale of hearing impairment was assessed according to the 1964 international standard organization hearing threshold parameters, i.e ., normal: inability to hear at minus 10-20 decibels (db), mild deafness: inability to hear at 21-40 db and moderate deafness: inability to hear at 41-55 db. All patients and controls had a standard ophthalmologic examination.

The best corrected visual acuity was obtained for each eye and the complete external examination of the eye was done. The anterior segments of the eye were examined with the slit lamp biomicroscope. Intraocular pressure was measured with an applanation tonometer. The pupils were then dilated with tropicamide (1% eye drops) and phenylephrine hydrochloride (10% eye drops). The ocular fundi were examined in all patients by direct and indirect ophthalmoscopy. The findings in various parts of the eye including conjunctiva, cornea, sclera, iris, ciliary body, lens, vitreous body, choroid and retina were noted. The same examiner carried out all examinations. Chi square test (c2 ) and Fisher′s exact probability test were used for statistical analysis.

Out of the 150 vitiligo patients, 81 were males and 69 were females. The age of the patients varied from 10-55 years, the mean age being 23 years. Peak age of onset of vitiligo was between 11 and 20 years. The duration of the disease ranged from 15 days to 31 years with a mean duration of 3.6 years. Duration of vitiligo was < 5 years for 106 patients and ≥ 5 years for 44 patients. Twenty-four patients had focal vitiligo, 20 had segmental vitiligo, 34 had acrofacial vitiligo and 72 had generalized vitiligo.

The results of ocular examination in patients and controls are given in [Table - 3]. Twenty-four (16%) vitiligo patients and five (5%) controls had specific ocular abnormalities like uveitis, iris pigmentary abnormalities including hypopigmented patches on the iris [Figure - 1], heterochromic iris [Figure - 2] and retinal pigmentary abnormalities which were statistically significant (c2 = 7.39, P < 0.001). Eleven patients had visual acuity of 20/40 or worse. Twenty-one (19.8%) patients of generalized vitiligo and 3 (9.8%) patients with localized vitiligo had ocular abnormalities, this difference being statistically significant (c2 = 3.89, P < 0.05) [Table - 4].

Although the precise etiology of vitiligo is not known, it has become quite clear in recent times that complex genetic, immunological, neural and self-destructive mechanisms are involved in its pathogenesis. Whatever the primary injury, trigger or aberration may be, autoantibodies directed against antigens of the melanocyte system were found to be ultimately destructive to the melanocytes in a vast majority of patients with vitiligo. [2],[3],[6],[15] Since melanocytes are distributed not only in the skin but also in the eyes, the inner ear and the leptomeninges, it became increasingly clear that the mechanisms responsible for melanocyte destruction in the skin affect melanocytes at other locations as well.

This was not surprising because of the well known association of vitiligo with ocular and auditory disturbances in diseases such as Vogt-Koyanagi-Harada syndrome, sympathetic ophthalmia, Alezzandrini′s syndrome, Waardenburg syndrome etc. [2],[6],[15] Patients with vitiligo have an increased incidence of uveitis and subclinical inflammatory fundus depigmentation. [7],[8],[9],[10],[11] Similarly, specific otic changes like hypoacusis have been reported in vitiligo. In our study, although none of the patients complained of visual impairment, specific ocular abnormalities occurred in 24 (16%) vitiligo patients and in five out of 100 controls, this difference being statistically significant (c2 = 7.39, P < 0.001). Many authors reported similar ocular changes like iris pigmentary abnormalities, uveitis and retinal pigmentary abnormalities in vitiligo patients in previous studies. [7],[9],[11]

Even though none of the patients complained of hearing impairment, findings of a thorough audiological examination of our patients were consistent with those of previous studies, revealing hypoacusis in 30 (20%) vitiligo patients and in only two (2%) controls (c2 = 8.19, P < 0.005). [13],[14] There was a high incidence of poliosis (18%), premature graying (6.6%) and K φbner′s phenomenon (7.4%) in the present study. All these findings suggest that the process of melanocyte destruction is extensive and not limited to the vitiliginous skin. Patients with vitiligo have an increased risk of developing autoimmune diseases such thyroid disease, Addison′s disease, pernicious anemia, diabetes mellitus and alopecia areata. [2],[3],[12],[16] In the present study also, there was a high incidence of other autoimmune disorders like alopecia areata (7.4%), hypothyroidism (12%) and diabetes mellitus (16%).

In our study, 54 (36%) patients had a positive family history of vitiligo. This finding establishes that vitiligo is a genetically determined disease. [2],[17],[18] Recently, many studies have reported that oxidative stress and accumulation of free radicals in the epidermal layers of the affected skin [19],[20] and blood of vitiligo patients [21],[22] play an important role in the pathogenesis of vitiligo as in any other systemic metabolic disease. [19],[20],[21],[22] These findings in conjunction with ours clearly establish that the pathophysiology of vitiligo is complex and systemic rather than focal.