What is the structure of the steroid molecule?

All steroids are composed of cyclopentano-perhydro-phenanthrene ring. It is composed of three 3C rings and one 5C ring.

To increase the potency of topical steroid, the structural modifications done are:

Where would one preferentially use low-potent steroids?

In conditions and areas where higher absorption of topical steroids can occur, it is preferable to use low-potent steroids.

Hence, in the above situations, a low-potency steroid application is preferred. In addition, use of oral therapy and early use of steroid-sparing agents, wherever applicable, helps to avoid the side effects of topical steroids.

Considering a diagnosis of palmar psoriasis, a class I superpotent steroid-like clobetasol propionate 0.05% in combination with 3% salicylic acid in an ointment base will be preferred to be applied 2 times a day only on the affected area.

How can one optimize the use of topical steroids?

Enumerate the side effects of topical corticosteroids

The side effects of topical corticosteroids are as enumerated in Box 1. 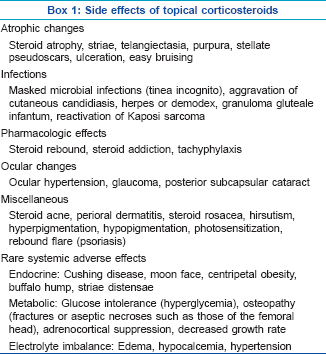 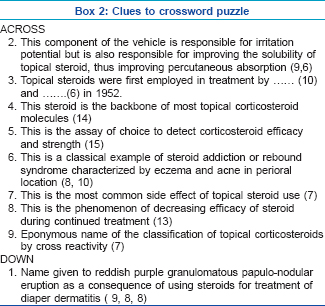 When does one suspect contact hypersensitivity to topical steroids?

Contact hypersensitivity to topical steroids is suspected when there is persistence or worsening of skin disease on topical steroids. The risk increases when there is prolonged exposure to the drug. Non-fluorinated corticosteroids (e.g., hydrocortisone, hydrocortisone 17-butyrate and budesonide) result in higher prevalence of corticosteroid contact allergy in comparison to fluorinated compounds. This has to be distinguished from hypersensitivity to other constituents, for example, lanolin and preservatives such as parabens and antibiotics.

A classification scheme based on structural relation of the steroid molecule has been devised for cross-reactivity. This scheme with the representative agents hydrocortisone (group A), triamcinolone acetonide (group B), betamethasone (group C) and hydrocortisone butyrate (group D) is useful for clinical tests of contact allergy to corticosteroids.

Dermatophytoma appears as linear, single, or multiple white or yellow bands on the nail plate and can be easily diagnosed from external appearances. It is characterized by abundant fungal filaments, large spores, or both, compacted and forming a fungal ball. Biofilm development is proposed for the pathogenesis of this infection. The fungal mass firmly attaches to the nail plate and produces an extracellular polysaccharide and this leads to decreased antifungal penetration making the condition resistant to standard antifungal therapy.

Definitive diagnosis is made microscopically by observation of this fungal conglomerate via direct potassium hydroxide or chlorazol black E examination of nail samples from patients with suspected onychomycosis. Oral antifungal treatment alone is not enough to treat this condition and either chemical or physical debridement is essential to eliminate dermatophytoma.

What is livedoid vasculopathy?

Livedoid vasculopathy is a chronic, recurrent, occlusive vasculopathy of small dermal vessels characterized by recurrent, painful, slowly healing ulcerations on the lower extremities resulting in porcelain-white, stellate, atrophic scars surrounded by hyperpigmentation and telangiectasias, referred as "atrophie blanche of Milian." It predominantly affects young and middle-aged women. Focal, painful, purpuric macules and/or papules on the legs may be seen in early cases.

What are the other names for this condition?

Why is the condition called livedoid vasculopathy and not "vasculitis?"

The histopathology shows segmental hyalinizing vascular involvement of thickened dermal blood vessels, endothelial proliferation and focal thrombosis without leukocytoclasia. No true vasculitis is evident. Direct immunofluorescence study reveals immunoglobulin and complement components in the superficial, mid-dermal and deep dermal vessels, but this is merely the result of sponge-like absorption of nonpathogenic immune components in the thickened vessels. Pathogenesis involves hyalinization and thrombosis rather than leukocytoclastic vasculitis.

What are the factors causing livedoid vasculopathy?

What are the causative organisms of cutaneous cryptococcosis?

What is disseminated cryptococcosis?

What is the mode of acquisition of cutaneous cryptococcosis?

Cutaneous cryptococcosis can be either primary or secondary.

Direct inoculation into the skin usually results in a solitary lesion on the uncovered parts with primary lymph node involvement.

Lung is the most common site of primary involvement and 90% of cases can be localized here. Hematogenous spread can cause multicentric lesions involving the covered body parts with deep dermal or subcutaneous lesions. Lesions may resemble molluscum contagiosum, or appear acneiform, nodular, herpetiform, cellulitic, or keloid-like.

What are the investigations for the diagnosis of cutaneous cryptococcosis?

Investigations in a case of cutaneous cryptococcosis include:

What is the treatment of cutaneous cryptococcosis?

In immunosuppressed patients, the initial treatment is similar but lifelong maintenance treatment with fluconazole may be required. Primary cutaneous disease can be treated with oral fluconazole or itraconazole.

What is the mechanism of action of finasteride and dutasteride?

What is the dosage of finasteride used in patterned hair loss in men and women?

Finasteride has been tried in several doses ranging from 0.2 to 5 mg, but 1 mg/day is the optimal dose for male pattern hair loss. Oral finasteride in doses of 2.5 mg/day or more may be effective for the treatment of female pattern hair loss in postmenopausal women, in the absence of clinical or laboratory signs of hyperandrogenism.

The dose of dutasteride varies from 0.15 to 0.5 mg in different studies of patterned hair loss.

What are the sexual adverse effects of finasteride?

Sexual adverse effects with finasteride occur at the rate of 2.1-3.8% (comparable to placebo). Erectile dysfunction is the most common side effect followed by ejaculatory dysfunction and loss of libido. These effects commonly occur early in therapy and are reversible, they return to normal on stoppage of the drug or with continual use of the drug over a period of time. Very few studies have reported prolonged sexual adverse effects and alterations in sperm morphology.

In which subset of patients of patterned hair loss should finasteride be used with caution?

Finasteride should be used with caution or avoided in patients who have had a history of oligospermia or infertility, particularly if they are newly married and trying to raise a family. A patient who is anxious and expresses reservations about taking the drug may also be offered other treatments.

What is the effect of finasteride on prostate-specific antigen levels?

Erythema gyratum repens is a figurate erythema with a characteristic wood grain pattern and rapid peripheral spread. Polycyclic scaly erythematous plaques which produce concentric, figurate erythematous eruptions are characteristic and these migrate by 1 cm daily. The scales are usually present at the trailing edge and itching is usually present. Ichthyosis or bullae may be seen. Palmar hyperkeratosis may be present.

What is the pathogenesis of erythema gyratum repens?

Erythema gyratum repens has a strong association with internal malignancy in over 80% of cases. It is considered as an immunologically driven skin disease, however, its etiology is poorly understood. The three hypotheses regarding its pathogenesis include:

Enumerate the diseases which are associated with erythema gyratum repens?

Erythema gyratum repens is considered to be paraneoplastic and is commonly associated with lung cancer; other malignancies include cancers of esophagus, breast, bowel, uterus, cervix, kidney, pancreas and hematological neoplasia. Some non-parneoplastic cases may be idiopathic or have been reported in association with tuberculosis, cryptogenic pneumonia and CREST syndrome.

The four classical annular erythemas include:

What are the four stages of gout?

Gout is a systemic disorder caused due to abnormal uric acid metabolism. Uric acid crystallizes and gets deposited in the joints resulting in recurrent arthritis. There are four stages of gout: asymptomatic hyperuricemia, gouty arthritis, inter-critical period and chronic gouty arthritis.

What are gouty tophi?

Chronic cutaneous gout is characterized by firm, erythematous nodules called tophi which are present intradermally or in the subcutis. They usually occur in avascular tissue on the ears, olecranon and prepatellar bursae, or on acral areas around the joints.

What are the microscopic findings seen in gouty tophi?

On histopathology, gouty tophi are seen as amorphous, pinkish, crystalline material in the dermis surrounded by granulomatous inflammation. These can also be seen under polarized light microscopy which shows negatively birefringent urate crystals with typical needle-like shapes.

Enumerate the differential diagnosis of gout

What is vulvovaginal gingival syndrome?

It is characterized by erosions and desquamation of the vulval, vaginal and gingival mucosae and can result in scarring and the formation of strictures. Rarely, conjunctivae, lacrimal glands, auditory canal and esophagus can also be involved. Other findings include scarring alopecia and nail changes, cutaneous lesions may be associated in some cases. The probability of malignancy in these cases is 0.5-5%.