What are the causes of acquired palmoplantar keratoderma?

The causes of acquired palmoplantar keratoderma are outlined in [Box 1]. 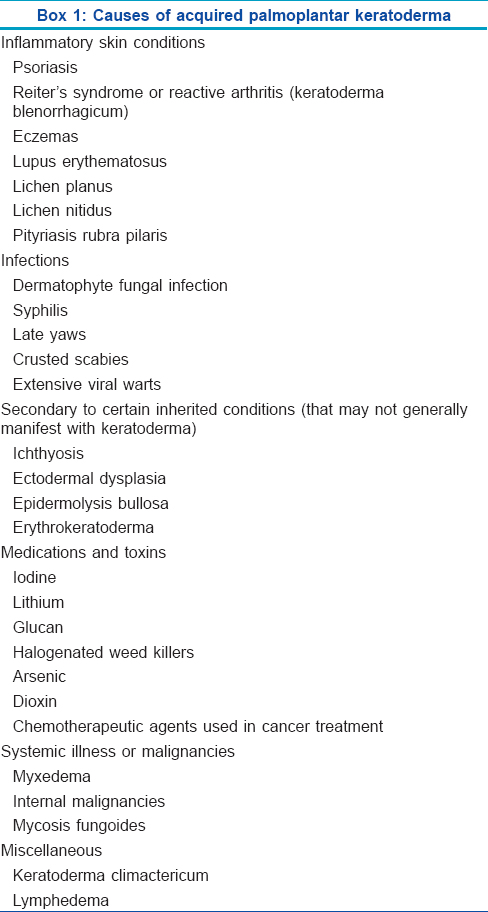 A 56-year-old obese hypertensive woman presented with painful, hyperkeratotic, erythematous, fissured plaques on the ball of the foot and heel for one year with aggravation of the symptoms in winter. She also gave a history of similar lesions appearing on the center of the palm for the past 2 months. Rest of the cutaneous examination including the scalp and nails are normal. There are no associated systemic symptoms.

There are two possibilities that one can consider in this case of acquired palmoplantar keratoderma.

The first possibility is keratoderma climactericum (climacteric = menopause in females). It is seen in obese, postmenopausal females and presents with erythematous hyperkeratotic painful fissured plaques on the pressure-dependent areas that tend to become confluent with time with similar lesions appearing on the palms. These patients give a history of worsening in winter. Treatment consists of weight reduction, topical keratolytics, estradiol and oral retinoids.

The second possibility is palmoplantar psoriasis. It can occur in identical circumstances, but the absence of lesions elsewhere (other classical sites of psoriasis, nails, scalp and arthritis) makes it less likely. Diffuse gross and centripalmar hyperkeratotic plaques are seen. Scalloped margins (Festonne) and depressed plaques (Caro-Seaner) on the sides of the fingers and involvement of knuckles suggest the diagnosis. Different morphologies can be seen in palmoplantar psoriasis. There can be hyperkeratotic plaques (resembling chronic hyperkeratotic eczema), erythematous patches or plaques studded with minute superficial pustules and discrete scaly plaques or patches.

How does palmoplantar psoriasis differ from hyperkeratotic eczema?

Palmoplantar psoriasis is very difficult to differentiate from hyperkeratotic hand and foot eczema and they may at times alternate. A sharply defined edge at the wrist, forearm or palm; absence of vesiculation and dull red thickening of the skin on the knuckles are useful pointers toward a psoriatic etiology.

Use the clues provided in [Box 2] to complete the crossword on acquired palmoplantar keratoderma in [Figure - 1]. Answers are provided on page number.

What are the most common sites of a trophic ulcer on the foot?

Trophic ulcers result due to an injury to an area which is compromised due to disease, vascular insufficiency or sensory loss. In leprosy, it can occur due to injury through a fissure in the skin or it commonly occurs due to the breakdown of tissue from within on account of intrinsic muscle paralysis. Hence, the front part of sole (ball of the foot) in the metatarso-phalangeal joint region is the most common site of ulceration in leprosy patients in 80% of the cases. The mid-lateral part of the sole underlying the region of the cubo-metatarsal joint and heel is the next common site comprising 5–10% of the cases.

Describe the stages of trophic ulceration?

The various stages of trophic ulcer, pathogenesis, clinical features and management are outlined in [Table - 1]. 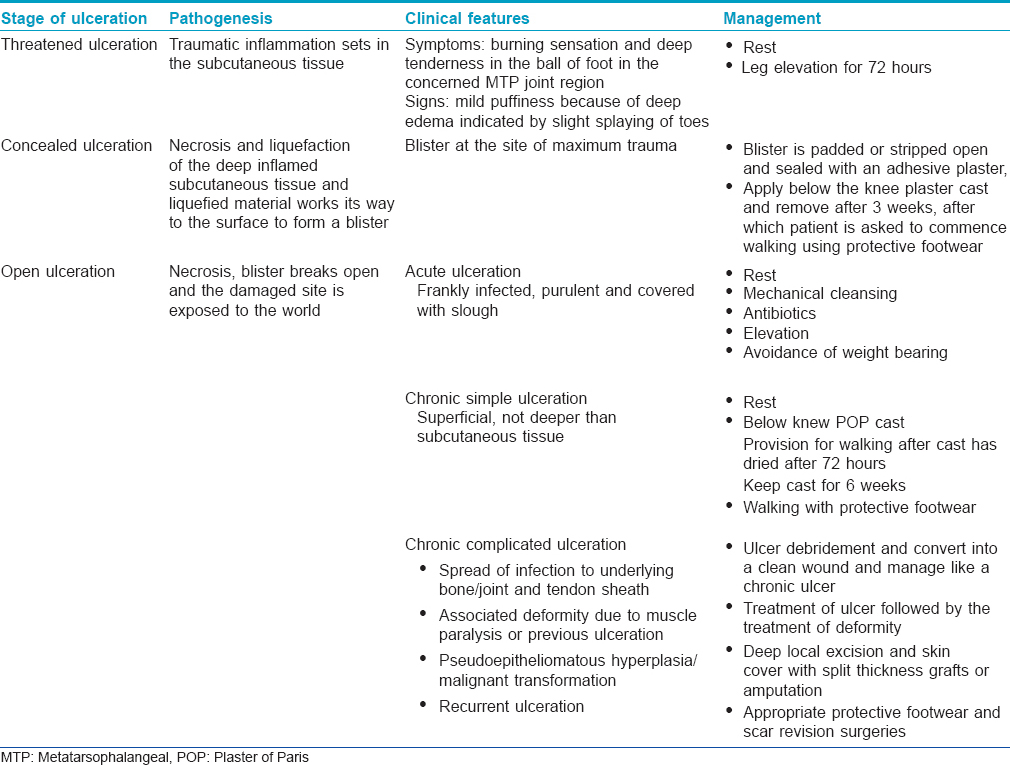 What are the methods of prevention of trophic ulceration?

The methods for the prevention of trophic ulceration include education, self-care procedures and protective footwear.

Describe the type of footwear used in trophic ulceration

The footwear used by patients with trophic ulceration is designed to minimize further trauma and to decrease pressure at vulnerable sites. The structure of footwear with its relevant function is outlined in [Table - 2].

Modifications in footwear can be done based on patient needs.

What are the offloading measures in trophic ulceration?

Offloading pressure off the ulcer is the key to successful management of a trophic ulcer. Once the ulcer heals, in the early phase (6–8 weeks), it is still liable to breakdown, and more restrictive types of offloading devices need to be used before the patient can graduate to specialized footwear. The modalities of offloading include:

Enumerate the Food and Drug Administration-approved uses of imatinib

Enumerate the cutaneous side effects of imatinib

The most common toxicities with imatinib are nausea, myalgia, skin rashes and edema.

Pigmentary changes are common and usually manifest as hypopigmentation; however, hyperpigmentation may also be seen. Hypopigmentation may manifest as generalized skin lightening, vitiligo-like lesions and hair graying; it is common since the drug inhibits melanogenesis via inhibition of the binding of ligands to c-kit receptors. Hyperpigmentation is uncommon and may be seen on the skin, palatal mucosa, nails, teeth, hair and gums. Melasma-like pigmentation has also been recently described. Hyperpigmentation is attributed to the formation of a drug-melanin metabolite; other theories include drug-induced cytotoxic response to epidermal “neoantigen” and the presence of a specific KIT mutation and its interaction with other receptors.

What is epidermodysplasia verruciformis?

What are the clinical features of epidermodysplasia verruciformis?

The disease manifests as two main phenotypes which differ with respect to the potential for malignant transformation. The benign lesions manifest as flat, wart-like, hypopigmented or hyperpigmented papules that may coalesce to form scaly patches or plaques with irregular borders resembling tinea versicolor. These lesions are most prevalent on the trunk, neck and extremities. The lesions with malignant potential manifest as verrucous and seborrheic keratosis-like lesions and occur more frequently on photo-exposed sites including face, hands and feet.

Enumerate the treatment options and malignancies associated with epidermodysplasia verruciformis

Photoprotection should be strictly advised and patients should be kept under observation for the development of premalignant and malignant tumors. Treatment options include systemic retinoids, interferons, cimetidine and topical imiquimod, immunotherapy and vitamin D analogs.

About 30–60% of the patients develop skin malignancies, mostly in the fourth and fifth decades. The common malignancies are squamous cell carcinoma and Bowen's disease. Adnexal carcinoma is uncommonly reported.

What is the mechanism of the action of itolizumab?

Itolizumab is a novel humanized monoclonal antibody developed in India for moderate/severe chronic plaque psoriasis. It inhibits T-cell proliferation induced by activated leukocyte cell adhesion molecules and interleukin-2 by binding to the extracellular scavenger receptor cysteine-rich distal domain 1 of CD6. It downregulates the phosphorylation of intracellular proteins and also reduces the production of interferon-γ, interleukin-6 and tumor necrosis factor-α.

What is the dosage regimen for itolizumab in psoriasis?

Itolizumab is administered as an intravenous infusion at a dose of 1.6 mg/kg in 250 ml of normal saline over 3 h. The recommended dosage for psoriasis is 1.6 mg/kg body weight, once every 2 weeks for 12 weeks and 1.6 mg/kg once in 4 weeks until 24 weeks have elapsed.

Why are infections less commonly encountered with itolizumab in comparison to other biologicals?

Itolizumab binds to CD6, a highly glycosylated membrane protein predominantly expressed on lymphocytes. The CD6 co-stimulatory pathway contributes to Th1 activation and differentiation of T-cells, promoting a pro-inflammatory response. The immunomodulatory effects are thus not produced by inhibiting ligand binding and inducing T-cell depletion. They are effected by turning receptor binding nonproductive, either by inhibiting new receptor formation or by stimulating the loss of existing receptors or by causing a blockage followed by internalization or downregulation of receptors. Hence, no significant alteration of the lymphocyte count or signs of immunosuppression is documented at any dose of itolizumab monotherapy. Thus, the infection rates with itolizumab (18%) are lowest in phase III trials in comparison to other biologicals (ustekinumab, 22–31%; etanercept, 27%, adalimumab, 29% and infliximab, 42%).

Which are the important species and the commonly affected geographic areas for lymphatic filariasis?

Lymphatic filariasis is endemic worldwide and nearly 1.4 billion people are estimated to be at risk globally. Asia, Africa, Pacific Islands, South America and the Caribbean basin are the most affected geographic areas. In India, the endemic states are Bihar with the highest endemicity (over 17%), Kerala (15.7%) and Uttar Pradesh (14.6%).

What are the clinical manifestations of lymphatic filariasis?

Which are the non-invasive techniques of diagnosing lymphatic filariasis?

Non-invasive methods for the diagnosis of lymphatic filariasis include the following:

Species identification can be done by the use of immunochromatographic and deoxyribonucleic acid probes using polymerase chain reaction.

What are the treatment modalities for lymphatic filariasis?

Treatment modalities include diethylcarbamazine at 6 mg/kg single dose or daily for 12 days in divided doses, oral ivermectin 200 μg/kg and albendazole 400 mg twice daily for 2 weeks. In endemic countries, mass administration of a single annual dose of oral albendazole 400 mg and diethylcarbamazine 6 mg/kg of body weight is recommended for the prevention of transmission.