The ectoparasite belongs to Demodex species, an obligate human ectoparasite which is commonly found at or near the pilosebaceous units.

The two species of dermatological importance include Demodex folliculorum and Demodex brevis. The characteristic differentiating features of these species are outlined in [Table - 1].

What are the sites of predilection for Demodex infestation?

The sites of predilection for Demodex infestation are as follows:

What are the methods to detect Demodex?

When is infestation with Demodex mites of significance?

Mere presence of Demodex does not indicate pathogenicity. Penetration of Demodex into the dermis or, more commonly, an increase in the number of mites in the pilosebaceous unit of >5/cm 2 is believed to cause inflammation. Some authors consider the density of >5 mites per follicle as a pathogenic criterion.

What are the predisposing factors for demodicosis?

What are the dermatological conditions in which Demodex has been implicated?

There are various dermatological conditions in which there is an increase in Demodex mite density.[1]

Recently, a new classification of demodicosis has been proposed as primary and secondary forms based on clinical manifestations.[2]

There is an abnormal increase in mite colonization in the absence of preexisting or concurrent inflammatory dermatoses such as acne, rosacea or perioral dermatitis. Remission of the disease occurs only after topical or systemic acaricides but not with antibiotics possessing anti-inflammatory effects such as doxycycline or macrolides. This form is characterized by late-onset disease and is usually asymptomatic or may present with mildly pruritic lesions commonly seen on the face and especially the periorificial areas. Variants include spinulate demodicosis, Demodex folliculitis, ocular and auricular demodicosis.

It can occur as a part of known skin or systemic diseases such as human immunodeficiency virus infection, leukemia or chronic renal failure. Associations include perioral dermatitis, papulopustular rosacea, seborrheic dermatitis and tumors such as eyelid basal cell carcinoma or mycosis fungoides. It may be seen in patients on topical or systemic steroids, topical calcineurin inhibitors, phototherapy and epidermal growth factor inhibitors. This form is characterized by an early onset with more diffuse facial distribution or truncal involvement with more extensive inflammation.

Outline the preventive and therapeutic modalities for demodicosis

Preventive measures include regular facial cleansing with avoidance of oil-based cleansers and greasy cosmetics. Therapeutic modalities for demodicidosis include:

What is ichthyosis follicularis, alopecia and photophobia (IFAP) syndrome?

It is a syndrome of ichthyosis follicularis, atrichia and photophobia. It is an X-linked recessive condition caused by missense mutations in membrane-bound transcription factor protease site 2 gene causing impaired cholesterol homeostasis and ability to cope with endoplasmic reticulum stress.

What are the clinical features of ichthyosis follicularis, alopecia and photophobia syndrome?

A 25-year-old unmarried sexually active man presents with symptoms of dysuria with mild whitish urethral discharge for the past 1 week. There is a positive history of unprotected exposure with a commercial sex worker 15 days before the onset of symptoms.

What is the likely diagnosis?

The prior history of unprotected sexual exposure accompanied by dysuria and urethral discharge in a man points to a diagnosis of urethritis. The presence of scanty mucoid urethral discharge would go more in favor of non-gonococcal urethritis though the final diagnosis could be confirmed after the demonstration of the organism on smear/culture.

Enumerate the differences between gonococcal and non-gonococcal urethritis

There are certain differences between gonococcal and non-gonococcal urethritis [Table - 2]. 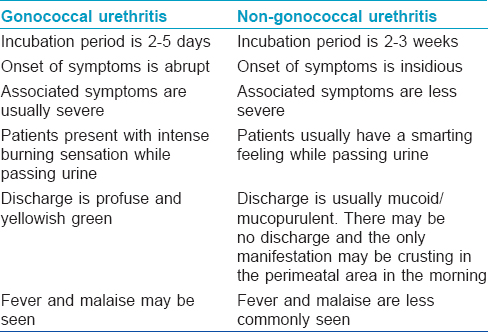 Which is the bedside investigation for diagnosing the origin of urethral discharge?

A simple bedside investigation that can be done to know the origin of the urethral discharge (from anterior/posterior urethra or bladder) is a two-glass and three-glass urine test. (Though this is not done as a routine and is an outdated test, this can be posed as a viva question).

In this test, the patient is asked to pass urine in two separate glasses.

For better accuracy, one can perform the three-glass urine test. Here, the anterior urethra is irrigated with a colorless antiseptic (1:8000 oxycyanide of mercury) until washings in the first glass are clear. Then, patient is asked to pass urine in two glasses. If the first sample contains pus, the infection lies in the posterior urethra and if the second glass contains pus, the infection lies in the bladder.

How can a diagnosis be confirmed in the above case scenario?

To confirm the diagnosis, urethral material needs to be obtained using meatal or intraurethral swabs by milking the penis from base to the glans (since in this case, the discharge is very scanty). Patient should be asked not to pass urine for 2 hours prior to the test. The swab is introduced for 2–3 cm inside the urethra and then withdrawn gradually. This smear is then stained with Gram stain.

Chlamydia trachomatis is the most common cause of non-gonococcal urethritis. Other pathogens are Trichomonas vaginalis, Mycoplasma hominis, Ureaplasma urealyticum. For a more specific diagnosis of C. trachomatis, the sample can be sent for culture (HeLa 229 and McCoy cell lines). Other non-culture, non-invasive diagnostic tests are included under a broad classification as antigen detection tests/nucleic acid hybridization/nucleic acid amplification/urethral lymphocyte isolation.

How will you manage a case of non-gonococcal urethritis?

The patient should be screened for other treatable sexually transmitted infections and should be offered counseling and serologic testing for human immunodeficiency virus. An effort should be made to identify and treat the infected partner.

The treatment of non-gonococcal urethritis would include azithromycin 1 g as a single dose, orally or doxycycline 100 mg twice daily for 7 days or alternatively, erythromycin stearate 500 mg 4 times a day can be prescribed. The patient should be instructed to abstain from sex for 7 days after therapy, even after treatment with a single dose of azithromycin.

Clinically, porokeratotic eccrine ostial and dermal duct nevus has punctate pits with comedo-like plugs typically localized to palms and soles. However, lesions at other sites as well as blaschkoid and systemized patterns have been reported. Lesions may become verrucous, especially on hair-bearing skin beyond the palms and soles.

Histopathological examination shows the characteristic cornoid lamella (epidermal acanthosis and a deep epidermal invagination of a parakeratotic column with underlying absence of granular layer) and a dilated acrosyringium beneath the cornoid lamella.

What are the pathogenic mechanisms for development of porokeratotic eccrine ostial and dermal duct nevus?

A keratinization defect with abnormally dilated parakeratotically plugged acrosyringium and increased proliferation of basal keratinocytes may be the pathogenic mechanism. Lack of carcinoembryonic antigen expression, genetic mosaicism and somatic gene mutation are other proposed theories.

What are the therapeutic modalities for porokeratotic eccrine ostial and dermal duct nevus?

Enumerate the components of metabolic syndrome?

The diagnosis of metabolic syndrome is based on the presence of ≥3 criteria of the modified National Cholesterol Education Program's Adult Treatment Panel:

Which dermatological conditions can be associated with metabolic syndrome?

What are the co-morbidities associated with psoriasis?

The comorbidities associated with psoriasis are outlined in [Box 1].[3] 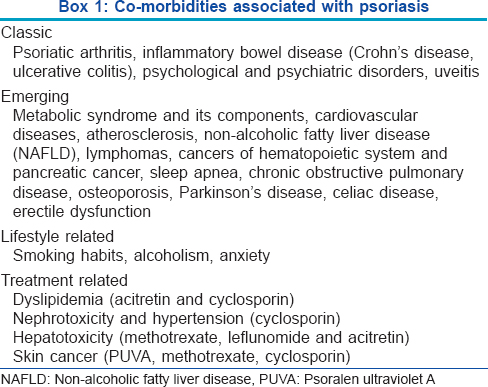 Angioma serpiginosum is a rare, benign, acquired, vascular nevoid, mosaic condition of unknown etiology. It is a progressive anomaly that starts in early childhood, stabilizes in adults and may partially involute with time. It has a female preponderance and chiefly involves the lower extremities and buttocks. The lesions are copper to bright red, punctate, non-blanchable or partially blanchable, grouped macules that may develop into papules with a background of erythema. Lesions enlarge by developing new lesions at the periphery with clearing of lesions in the center and this leads to a serpiginous or gyrate or ring-like morphology.

What are the dermatoscopic and histological characteristics of angioma serpiginosum?

Dermatoscopy reveals the characteristic presence of round to oval red lagoons.

What is giant cell arteritis?

Giant cell arteritis is a rare systemic immune-mediated vasculitis that affects the elderly, characterized by a pan-arteritis of medium and large arteries, especially the extracranial branches of the carotid artery. The synonyms are temporal arteritis or cranial arteritis. It may be associated with the HLA-DR4 haplotype with a genetic predisposition. Other studies suggest a possible association with chlamydia pneumonia, parvovirus B19 or herpes zoster infection.

High-dose corticosteroids are the treatment of choice. Additional immunosuppressive therapy, such as azathioprine, mycophenolate mofetil or methotrexate may be needed. A newer modality, humanized monoclonal anti-interleukin-6-receptor antibody, tocilizumab has shown good response in some cases. Aspirin may be recommended if there are no contraindications.

What are the synonyms of livedoid vasculopathy?

The various conditions which can be associated with livedoid vasculopathy include:

Lesions are distributed symmetrically on dorsa of the feet, ankles and lower legs. The initial lesions are purpuric macules, papules or ecchymotic net-like streaks which develop due to abnormal perfusion of the cutaneous microcirculation.

Burning pain precedes the ulceration; painful, necrotic ulcers are classically located asymmetrically on the ankle extending to the dorsum of the foot and up to distal leg. The ulcers are characteristically small, irregular, painful and recurrent and rarely may coalesce to form big ulcers. Ulcers develop due to thrombotic ischemia.

These are porcelain-white stellate scars usually surrounded by telangiectasias and hyperpigmentation and represent irreversible infarction.

Enumerate the causes of atrophie blanche

The causes of atrophie blanche include:

Histopathological findings depend on the stage of the disease. Examination of the ulcers is diagnostic. It is important to include the borders of the ulcer while doing a biopsy rather than taking only the base.

Characteristic fibrin occlusion and thrombus formation involving the upper and mid-dermal capillaries are seen in the early stage. Perivascular infiltrate is minimal and predominantly lymphocytic. Extravasation of red blood cells results from vessel wall damage and there is endothelial proliferation. Leukocytoclasia is usually absent and if neutrophils are found, it is usually secondary to the necrotizing ulcerative process. In the stage of atrophie blanche, there is hyalinization of dermis and capillary walls.

Treatment modalities depend on the associated condition and stage of presentation. Anticoagulants, antiplatelet agents, fibrinolytics, vasodilators, anti-inflammatory drugs and immunosuppressants form the mainstay. Intravenous immunoglobulin, hyperbaric oxygen, psoralen ultraviolet A therapy (PUVA) and supplements can be used. Supportive measures such as rest, leg elevation and compression stockings are important.