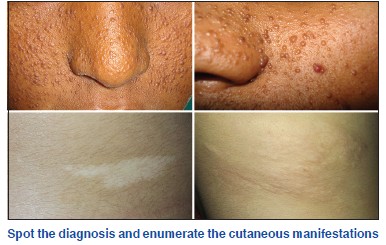 What are the other names for tuberous sclerosis?

What is the inheritance of tuberous sclerosis?

Inheritance is autosomal dominant with variable expression and approximately 60-70% of tuberous sclerosis complex (TSC) is attributable to a new mutation.

What are the cutaneous features of tuberous sclerosis?

F. Other dermatological features include

What are the criteria for diagnosis of tuberous sclerosis?

International TSC Consensus Conference Revised Diagnostic criteria for tuberous sclerosis complex laid out in 2012 are as in Box 1. 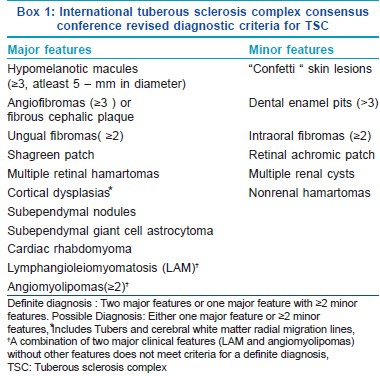 How has the name tuberous sclerosis been derived?

The name is derived from Latin tuber and the Greek skleros (hard). Tubers are potato-like nodules of glial proliferation and are characteristic central nervous system lesions of tuberous sclerosis complex. They may occur anywhere in the cerebral cortex, basal ganglia and ventricular walls (subependymal nodules) and their number and size correlate with the clinical features of seizures and mental retardation. Cortical tubers are often isodense with normal brain tissue and are best detected by magnetic resonance imaging. Subependymal nodules may calcify and are readily detectable with computerized tomography scanning. Fifty percent of plain skull X-rays taken in later childhood reveal bilateral areas of calcification in the brain.

What is the role of mammalian target of rapamycin inhibitors in tuberous sclerosis complex?

Tuberous sclerosis is an autosomal dominant tumor syndrome that results from mutations in the tumor suppressor hamartin (TSC1) or tuberin (TSC2). Hamartin and tuberin normally suppress mTOR, which increases cell cycle progression when it is released from negative regulation. The loss of tumor suppressive function in tuberous sclerosis complex leads to the formation of multiple tumors of the internal organs and skin.

Rapamycin or sirolimus belongs to a novel group of molecules known as mTOR inhibitors and is approved for use in renal transplantation and drug-eluting stents in United States. Two derivates of rapamycin, everolimus and temsirolimus are in clinical development for similar indications. Rapamycin forms an inhibitory complex with the immunophilin FKBP12 and corrects the aberrant signaling in a variety of pathways that regulate cell growth and apoptosis. It also inhibits vascular endothelial growth factor which is a proangiogenic molecule. Oral rapamycin can improve the renal, brain and skin lesions in tuberous sclerosis complex. Topical rapamycin has been shown to be effective in the treatment of facial angiofibromas without significant adverse effects.

What is the etiopathogenesis of acrodermatitis enteropathica?

Acrodermatitis enteropathica is a rare, autosomal recessive disorder classically characterized by zinc deficiency due to defective absorption. It is associated with ocular, gastrointestinal, and mucocutaneous symptoms with variable frequency, and can be fatal without zinc therapy.

What are the clinical features of acrodermatitis enteropathica?

Infants with acrodermatitis enteropathica present with the classic triad of diarrhea, skin rash with alopecia and extreme irritability with depression. It is common in premature babies due to insufficient body stores of zinc as well as high zinc requirements at the time of weaning. It is rare in breastfeeding infants because of zinc binding ligand in breast milk which generally protects breastfed infants against this condition by increasing zinc bioavailability. Onset is approximately 1-2 weeks after weaning or 4-10 weeks of age in bottle-fed infants. Infants with acrodermatitis enteropathica have a classical erythematous, scaly, psoriasiform and sometimes vesiculo-erosive eruption located periorificially (i.e. around the mouth, eyes and genital area). Refractory diaper dermatitis may be the presenting complaint. Nail changes consisting of paronychia as well as dystrophy of the nail plate may occur. Superadded staphylococcal and candidal infections are very common, and candida may not respond to topical therapy until zinc deficiency is corrected.

How is acrodermatitis enteropathica diagnosed?

What is the treatment for acrodermatitis enteropathica?

Treatment is with oral zinc, 3-5 mg/kg/day. Life-long zinc supplementation is required with a diet rich in zinc in the form of unmilled cereals, beans, cheese, whole wheat bread and animal proteins like lean red meat is necessary to prevent recurrences.

What are the clinical patterns of parthenium dermatitis?

What are the conditions in dermatology where we see comedones?

What are the salient features of genetic disorders commonly associated with photosensitivity?

The genetic disorders commonly associated with photosensitivity include:

The salient clinical features are outlined in [Table - 1]. 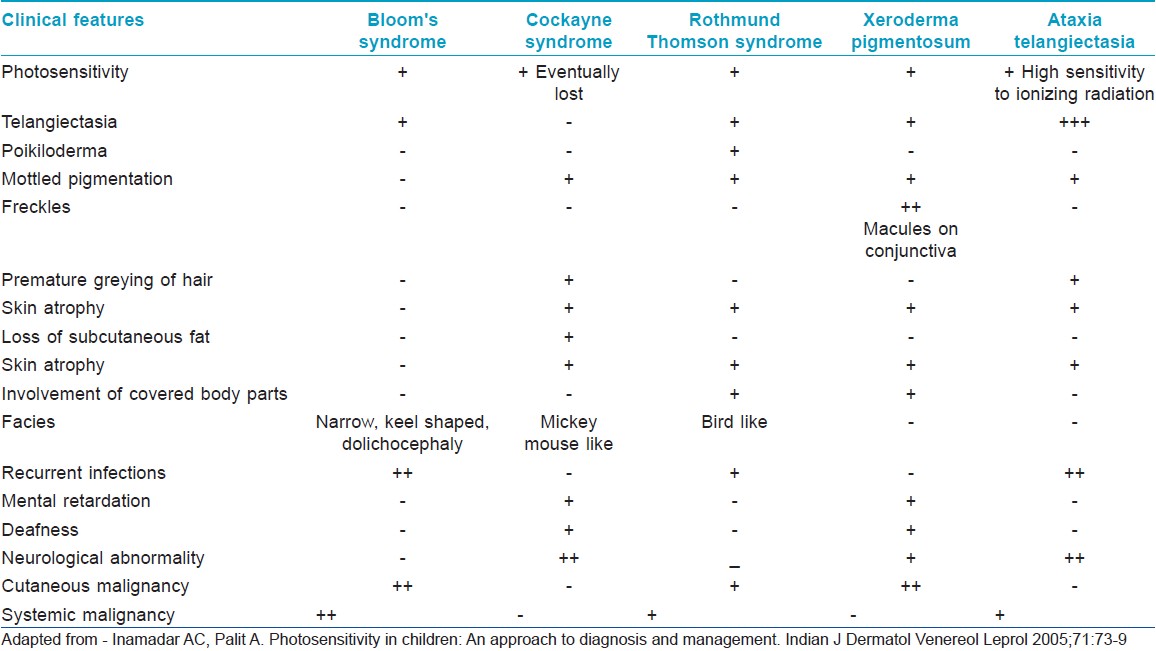 What is the inheritance pattern in xeroderma pigmentosum?

Which tumors are associated with xeroderma pigmentosum?

What are the treatment options in xeroderma pigmentosum?

Strict photoprotection (clothing, hats, sunscreens) and care of eyes (artificial tears, sunglasses) is mandatory. Early and adequate excision of all tumors is essential. Topical 5-fluorouracil may be useful for early or premalignant lesions. Chemical peeling and dermabrasion can be done. Prophylactic therapy with systemic retinoids may reduce the onset of skin cancers. The microbial enzyme T4 endonuclease V regularly applied as a topical liposome lotion has also been reported to be useful.

The lines of Blaschko represent a form of "mosaicism." They represent the routes of ectodermal cell migration from the neural crest.

These lines are in the form of transverse bands on the trunk, S-shaped on the lateral trunk and V-shaped in the middle of the back. The lesions follow lines parallel with the axis of the limb on the arms and legs. They are spiral shaped on the scalp, vertical in the mid-face, and extend laterally from the angles of the mouth. The lines do not cross the anterior truncal midline but run along it. Most epidermal nevi follow Blaschko′s lines.

Enumerate the uses of interferons in dermatology

Angiokeratomas are classified into either localized or diffuse forms. The localized form includes: (1) solitary papular type, which can manifest on any body part as a single lesion; (2) Fordyce type, which occurs on the scrotum or the vulva; (3) Mibelli type, which presents as hyperkeratotic vascular lesions over the bony prominences of the hands and feet; and (4) angiokeratoma circumscriptum neviforme, which is a congenital unilateral zosteriform verrucous lesion of the lower extremities.

What is the other name of Fox-Fordyce disease? Describe the clinical features.

Fox-Fordyce disease is also known as apocrine miliaria. It is a rare condition seen in adolescent women, over the apocrine gland-bearing areas, like the axillae, groin, areolae and inframammary creases in decreasing order of frequency. There may be intense itching that may be aggravated by emotional stimuli. Itching is common in the axillae. Clinical manifestations are in the form of skin-coloured, or slightly pigmented, dome-shaped, follicular papules. It may be followed by hair loss in the axillae. The disease has a prolonged course; it may remit in pregnancy or persist until menopause.

What are the treatment options for Fox-Fordyces disease?