What is the mechanism of action of methotrexate?

Methotrexate (MTX) is an analog of folate.

It competitively and reversibly inhibits dihydrofolate reductase (DHFR) enzyme and hence prevents the conversion of dihydrofolate to tetrahydrofolate. Tetrahydrofolate is a necessary co factor in the production of one carbon units, which are critical for the synthesis of thymidilate and purine nucleotides needed for RNA and DNA synthesis. It acts on the S phase of mitosis

It also inhibits aminoimidazole carboxamide ribonucleoside tranformylase, thereby increasing the local concentration of adenosine, which has a potent anti-inflammatory action

It causes suppression of lymphoid cells hundred times more than the suppression of proliferating keratinocytes and hence is efficacious in psoriasis.

What are the routes of administration of methotrexate?

Methotrexate may be administered by the oral, intramuscular, intravenous, subcutaneous and intrathecal routes.

What are the dosing regimens for methotrexate?

What are the indications of methotrexate in psoriasis?

Extensive, severe plaque type psoriasis that is not responsive to conventional therapy

Lack of response to PUVA/UVB or systemic retinoids.

What are the contraindications to methotrexate administration?

Absolute contraindications include pregnancy (as it may cause miscarriage or birth defects), moderate to severe hepatic or renal compromise, blood dyscrasias and active peptic ulcer disease.

It is to be avoided or used with caution in patients with human immunodeficiency virus infection.

What are the risk factors for methotrexate-induced hepatotoxicity?

Risk factors for hepatic toxicity are:

How do we monitor a patient for hepatotoxicity induced by methotrexate?

For monitoring toxicity, the patients are divided into high and low risk groups according to presence or absence of risk factors [Box 1]. 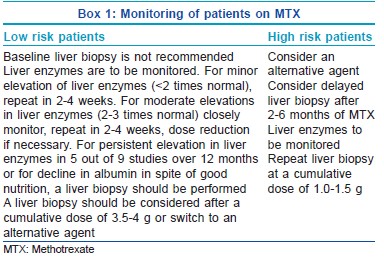 According to the Manchester guidelines for monitoring long-term toxicity, baseline assays of amino terminal of procollagen III N-terminal propeptide (PIIINP) level should be performed before starting methotrexalte wherever possible and should be repeated every 2-3 months while on therapy. Liver biopsy is indicated if of the pretreatment PIIINP is >8.0 μg/L, there are three abnormal PIIINP levels (>4.2 μg/L) over a 12-month period and lastly if there are elevated PIIINP levels above 8.0 μg/L in two consecutive samples. 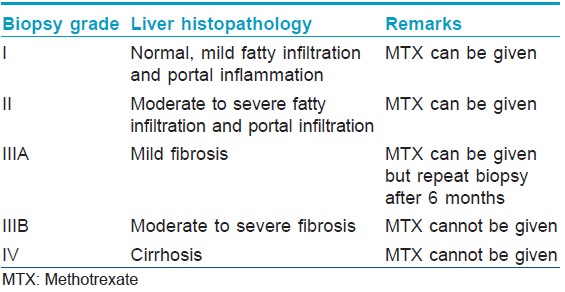 Table 1: Interpretation of liver biopsy findings and administration of MTX

What are the noninvasive methods to detect methotrexate-induced hepatotoxicity?

Though liver biopsy is the gold standard, noninvasive tests to detect methotrexate toxicity are:

Determination of PIIINP. Levels more than 4.2 ng/ml in Orion assay indicate hepatotoxicity. The test is nonspecific as regards to the site which is undergoing the fibrosis and hence not useful in patients who have psoriatic arthritis.

What are the advantages of administration of folic acid with methotrexate therapy?

Supplementation of folic acid reduces the gastrointestinal side effects of methotrexate. It also decreases the chances of pancytopenia and helps to counteract macrocytic anemia. It prevents the increase in liver enzymes without decreasing efficacy.

Options for folate supplementation include folic acid 1 mg daily or 5 mg for three doses every 12 h, once weekly, with the first dose given 12 h after the dose of methotrexate.

What are the reproductive side effects of methotrexate?

What are the manifestations of methotrexate toxicity?

Methotrexate toxicity manifests itself in several forms. The manifestations are hepatotoxicity, pulmonary toxicity, acute renal failure, stomatitis, ulcerations or erosions of the gastrointestinal tract and pancytopenia. Other rare cutaneous adverse effects are burning sensation over the skin, sloughing over the pressure points, severe mucositis, Stevens-Johnson syndrome, burning sensation, pain and ulceration of the psoriatic plaques.

What are the drugs that increase methotrexate toxicity?

The drugs that increase methotrexate toxicity do so

What is the treatment of methotrexate toxicity?

Folinic acid (leucovorin) is an antagonist of methotrexate as it bypasses the DHFR enzyme pathway for DNA synthesis. Folinic acid is metabloised in vivo to tetrahydrofolate in the absence of DHFR providing an alternative supply of DNA and RNA precursors. It should be administered within 24-36 h of the last dose of methotrexate. The dose required depends on serum methotrexate concentration. Folinic acid itself has very little toxicity. Therefore an oral dose of 10 mg/m 2 should be given on the first suspicion without waiting for a serum assay. Peroral or parenteral doses are continued every 6 h until the serum concentration of methotrexate falls to <10−8 M. When a serum assay is unavailable, 15-25 mg of folinic acid may be given by mouth every 6 h for 6-10 doses

Adequate hydration is essential to ensure maximal renal elimination; in case of renal impairment, alkalinization of urine with sodium bicarbonate may be required to avoid precipitation of methotrexate in the renal tubules.

The mnemonic FOCAL can be used to remember some of the key features of this syndrome: Female sex; Osteopathia striata; Coloboma; Absent ectodermis-, mesodermis-, and neurodermis-derived elements; and Lobster claw deformity. This eponym should not be confused with Gorlin syndrome or Gorlin-Goltz syndrome, which is the nevoid basal cell carcinoma syndrome).

Goltz syndrome is associated with at least 80 different mutations in PORCN gene on chromosome X.

The salient features are shown in Box 2. 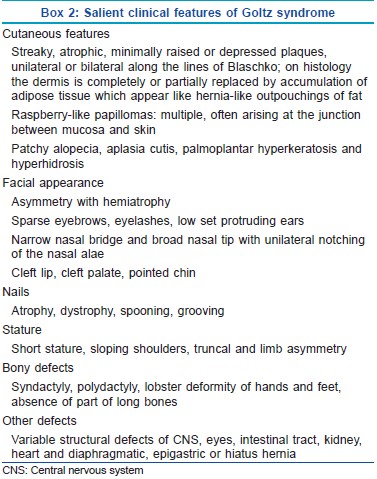 Mutations of RECQL4 gene on chromosome 8q24 which encodes for RECQ DNA helicase. It is a genetic instability syndrome due to a defect in DNA damage repair to which an enhanced predisposition of these patients for skin cancers is ascribed.

It can present in early infancy or early childhood. Photosensitivity is the hallmark feature (mild to intense erythema, edema, blistering after brief sun exposure) and tends to decrease with age but may persist till adult life. Poikilodermatous changes over the light exposed areas of skin, face and extremities are seen at 3-6 months or as late as 2 years of life. Lesions tend to be generalized with advancing age.

What is radiation recall phenomenon?

It is defined as recalling by skin of previous radiation exposure in response to administration of certain drugs. It is an acute inflammatory reaction confined to the previously irradiated areas, described in connection with actinomycin D and commonly seen with chemotherapeutic drugs, UV and megavoltage radiation therapy. The time interval between radiation therapy and occurrence of radiation dermatitis may range from 7 days to 15 years.

What are the dermatological side effects of epidermal growth factor receptor inhibitors?

Epidermal growth factor receptor (EGFR) inhibitors are a group of targeted chemotherapeutic agents, which are currently used in the treatment of many solid organ and hematological malignancies. EGFR normally plays a significant role in the control of cell growth and differentiation.

These targeted agents are associated with a wide spectrum of dermatological toxicities because they not only target tumor-related growth factors, but also target growth factors in the skin and its appendages. The constellation of cutaneous side-effects of EGFR inhibitors has been termed under the acronym PRIDE, papulopustules and/or paronychia, regulatory abnormalities of hair growth, itching, and dryness. Cutaneous side-effects include a characteristic follicular eruption, toxicity of the nails and distal digits, generalized xerosis, desquamation, pruritus without rash, hyperpigmentation, erythema, oral and nasal mucosal aphthae, skin hyperpigmentation, vaginal dryness and pruritus, blepharitis, ingrown eyelashes, trichomegaly, mild ocular irritation, alopecia, fine, brittle, and curlier hair, and a seborrheic dermatitis-like facial eruption. Follicular eruption is the most clinically significant of the cutaneous toxicities, as it is a potential marker of response to therapy.

What is the other name of pilomatricoma? Describe its histopathological features?

Pilomatricoma was first described by Malherbe and Chenatais in 1880 as a "calcified epithelioma of Malherbe." It is benign and considered to be a hamartoma of the hair matrix; it is composed of cells resembling those of the hair matrix and cortex and inner root sheath.

It has a unique histopathology consisting of basaloid cells and shadow or ghost cells. The tumor is well circumscribed and situated in the dermis. The outer cells are small with scanty cytoplasm and indistinct cell margins, and their rounded nuclei crowded together make this region deeply basophilic. Toward the center of the tumor, the cytoplasm is abundant and eosinophilic. The nuclear outline persists, but the chromatin is sparse and clumped in dark granules; finally all basophilic material disappears, and a "ghost cell" or shadow cell remains. The central areas may calcify. In older lesions, the basophilic cells may disappear.

Describe the clinical signs in pilomatricoma

Tent sign: Multiple facets and angles on stretching of the skin over the tumor is a pathognomonic sign

Teeter-totter sign: Pressing on one edge of the lesion leading to protrusion of the opposite edge from the skin

Skin crease sign: A central longitudinal crease is elicited within a lesion when it is squeezed lightly along its margins, perpendicular with the skin tension line, using the thumbnail of each hand.

What are the general recommendations for phototherapy in mycosis fungoides?

Narrow band UVB (NB-UVB) should be preferentially used in patients with patches and thin plaques, and PUVA should be reserved for patients with thick plaques and those who relapse after initial response to UVB. For inducing remission, three treatment sessions per week of PUVA phototherapy or three sessions per week of NB-UVB phototherapy may be advised till the patient achieves complete remission. There is no consensus regarding the use of maintenance therapy with phototherapy once remission is achieved. Maintenance therapy should not be employed for PUVA as a routine and may be reserved for patients who experience an early relapse after an initial course of phototherapy.

Blue nevi are melanocytic neoplasias of pigmented spindle and/or epithelioid melanocytes in the mid-dermis. They appear blue, blue-gray or blue-black and may be congenital or acquired. The blue-gray color is due to the optical effect, named the Tyndall effect.

Describe the principle of photodynamic therapy

Photodynamic therapy (PDT) is based on the principle of phototoxic reaction which is caused by a photosensitizer that is activated by light to form reactive oxygen species. Further cell death is caused by apoptosis and inflammatory response leading to direct cytotoxicity. For treating skin diseases, PDT is performed by using topical precursor molecules of the biosynthetic pathway of heme such as 5-aminolevulinic acid or its methyl ester, methyl aminolevulinate.

Enumerate the uses of topical photodynamic therapy in dermatology

In dermatology, topical PDT is used for:

Diseases caused by human papillomavirus (HPV) infection, including various warts and epidermodysplasia verruciformis. It has also been used in Bowenoid papulosis. It is effective for the treatment of superficial lesions as well as latent HPV infections, which may due to its antiviral properties

Acne (with red or blue light) and photorejuvenation treatments.

Sweet′s syndrome or acute febrile neutrophilic dermatoses are characterized by fever, leukocytosis, and tender erythematous plaques and nodules with pseudo-vesiculation. The three main clinical types include: