The diagnosis is pyoderma gangrenosum: (a) ulcerative and (b) vegetative or superficial granulomatous spreading type.

Pyoderma gangrenosum has varied clinical presentations. These include:

Pyoderma gangrenosum in infants and children

What is pathergy phenomenon?

This is characterized by the localization of pyoderma gangrenosum to the sites of skin damaged by trauma, surgery or venipuncture. It possibly represents a localized, misdirected host-mediated effector cell response to cutaneous tissue which is antigenically changed by trauma in a patient with altered immune reactivity.

What are the types of pathergy test?

There are two types of pathergy test: oral and cutaneous.

It can be performed by pricking the mucosa of the lower lip using a 20-gauge blunt disposable needle and taking readings after 48 h. A pustule or an ulcer at the site of trauma is considered to be positive. It is less sensitive as compared to the ordinary skin pathergy test but easier to assess.

It is usually performed on the flexor aspect of the forearm with a 20-gauge needle inserted vertically or diagonally at an angle of 45° at a depth of 3–5 mm to reach the dermis. About 1–2 mm papule with an erythematous halo or its transformation into 1–5 mm pustule is considered to be positive.

As an alternative, injection of intradermal saline/monosodium urate crystals/streptococcal antigens has been used. Other routes of pathergy testing in addition to the intradermal are subcutaneous and intravenous routes.

What are the conditions that exhibit a positive pathergy test?

The conditions that exhibit a positive pathergy test include:

What are the associations of pyoderma gangrenosum?

The diseases which can be associated with pyoderma gangrenosum are as follows:

What are the criteria for the diagnosis of pyoderma gangrenosum?

The diagnostic criteria for pyoderma gangrenosum as suggested by W.P. Daniel Su et al. are as follows:

What are the treatment options for pyoderma gangrenosum? 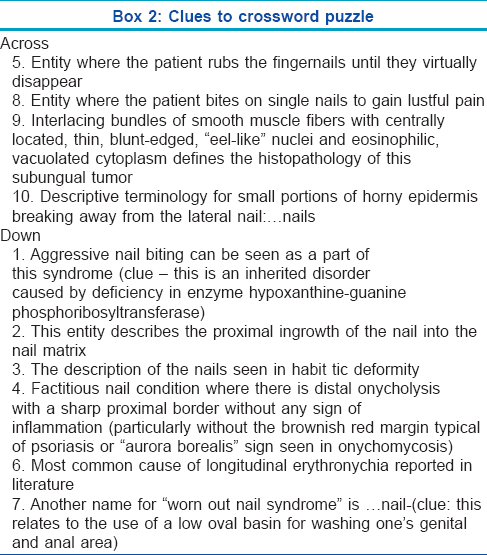 Answers to the crossword puzzle are provided in [Figure - 3].

How do you classify palmoplantar keratodermas?

Palmoplantar keratodermas can be classified on the basis of history or clinical pattern.

What are the specific clinical features seen in keratodermas?

The keratodermas may show certain specific clinical features. These include:

Enumerate the various types of diffuse and focal keratodermas?

The various types of diffuse and focal keratodermas are outlined in [Box 3]. 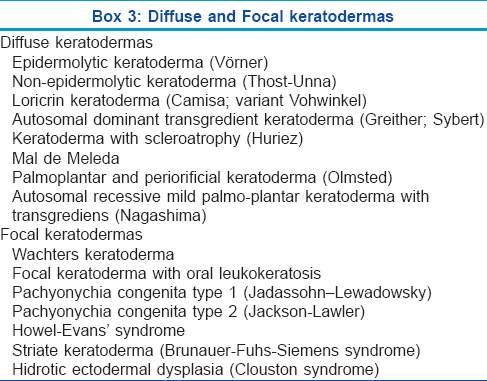 Which are the keratodermas with extracutaneous features?

The keratodermas with extracutaneous features include:

Which are the keratodermas associated with carcinoma?

The keratodermas associated with carcinomas include:

Which are the keratodermas associated with hearing impairment?

The keratodermas associated with hearing impairment include:

Due to the defect in connexin function, hereditary keratodermas are associated with hearing loss.

What is non-pigmented fixed drug eruption?

The concept of non-pigmenting fixed drug eruption was popularized by Shelley and Shelley in 1987. Unlike fixed drug eruption in which residual pigmentation is a hallmark, this variant is rare and the drug-induced lesions resolve without leaving any residual pigmentation. It has been postulated that the likely site of the drug-induced hypersensitivity response is the dermis rather than the epidermis. Hence, there is absence of pigment incontinence and no pigmentary sequelae are seen after the initial lesions subside.

Which are the drugs causing fixed drug eruption?

Which are the drugs causing non-pigmented fixed drug eruption?

What is the cause of reactivation at the same site in fixed drug eruptions?

It is believed to be due to a delayed-type hypersensitivity reaction mediated by CD8+ T-cells. Epidermal CD8+ memory T-cells which are retained in the lesions get reactivated on rechallenge.

What are the histopathological findings in fixed drug eruption?

Histopathology shows interface dermatitis with vacuolar degeneration of basal keratinocytes, dermal edema and a perivascular lymphocytic infiltrate of the upper dermis along with eosinophils in early lesions whereas melanophages in the upper dermis are characteristic of resolving or healed lesions.

What are pearly penile papules?

Pearly penile papules are common anatomical variations seen on the male genitalia. Clinically, these present as multiple, 1–2 mm, smooth, dome-shaped, skin-colored or pinkish papules in a single or double row along the corona of the glans penis. They may be rarely seen on the glans in rows or rings or ectopic lesions may be seen on the shaft of the penis.

What are the histological and dermatoscopic findings of pearly penile papules?

How can the condition be treated?

Reassurance and counseling regarding the benign nature is sufficient. In anxious patients desiring treatment, cryotherapy or lasers can be effective.

What is ultraviolet A-1 phototherapy and enumerate the various dosing regimens?

Ultraviolet A-1 phototherapy is used at varying doses including high-dosage (>60 J/cm 2), medium-dosage (30–60 J/cm 2), low-dosage (10–20 J/cm 2) and very low-dosage (<10 J/cm 2) regimens. Therapy can be delivered either with low irradiance lamps (such as Philips TL-10) or from metal halide portable or whole body ultraviolet A-1 units.

What are the uses of ultraviolet A-1 phototherapy?

Ultraviolet A-1 phototherapy has been effective in a variety of inflammatory, sclerosing and neoplastic skin diseases that are characterized by dermal infiltrates rich in T-lymphocytes. The common cutaneous disorders in which ultraviolet A-1 has been tried include:

What is fish tank granuloma?

Fish tank granuloma is an atypical mycobacterial infection due to Mycobacterium marinum (formerly Mycobacterium balnei). The organism is an environmental, non-tuberculous mycobacterium that causes disease in fresh and salt water fish and rarely in humans. They are mainly aquarium related or the result of fish or shellfish injuries in swimming pools and other freshwater sources. Hence, infection with M. marinum has been named as “fish tank granuloma.” Recently, opportunistic M. marinum skin infections have also been reported in patients receiving anti-tumor necrosis factor agents.

The disease begins as a violaceous papule or nodule and can also present as a psoriasiform or verrucous plaque, usually on the hands, feet, elbows or knees. Lesions develop at the site of trauma about 2 or 3 weeks after inoculation. These may be solitary but are often multiple and occasionally, sporotrichoid spread occurs. The lesions may ulcerate or frequently heal spontaneously within 1–2 years with residual scarring. Sometimes, penetration to the underlying structures may occur and complications include tenosynovitis, osteomyelitis, bursitis and septic arthritis.

What are the treatment options for Mycobacterium marinum infections?

M. marinum is often resistant, both in vitro and in vivo, to several antibiotics and there are few documented therapeutic studies, hence there is no established therapy of choice.

In superficial skin infections, clarithromycin, minocycline, doxycycline and trimethoprim-sulfamethoxazole are used as monotherapy. Combined therapy with two or more drugs may be needed due to drug resistance. In severe infections, a combination of rifampicin and ethambutol has been recommended. Treatment should be given for at least 6 weeks and for up to 12 months, depending on the clinical evolution of the lesion. Debridement is generally not recommended and is only indicated in cases that are refractory to antibiotic therapy. Cryotherapy, laser and photodynamic therapy have been reported as effective choices but there are few studies evaluating the efficacy of these methods.