Air-borne contact dermatitis to Parthenium hysterophorus (Parthenium dermatitis), is the most common type of airborne contact dermatitis in India, [1] and is a cause of significant dermatological morbidity in our country. [2] Corticosteroids have been the mainstay of treatment for this condition [2] but owing to its chronic nature, the long term use of corticosteroids often causes severe and sometimes, irreversible side effects. [3],[4] Azathioprine, an immunosuppressive drug, which acts by inhibiting the activated T lymphocytes, has emerged as an effective and safe alternative. [5] In earlier studies, we demonstrated that azathioprine 100 mg daily was effective, [6],[7],[8] safe for long-term use, and could induce lasting remissions in Parthenium dermatitis. [9] In a small open study, we also demonstrated that 300 mg weekly pulse doses of azathioprine was not only effective and safe in the treatment of Parthenium dermatitis, but reduced the cost of treatment by 60% and encouraged compliance (since only four doses of the drug were taken in a month). [10] We designed this non-inferiority trial to compare the effectiveness and safety of weekly pulse with daily doses of azathioprine in patients with air-borne contact dermatitis to Parthenium.

Patients with a clinical diagnosis of Parthenium induced air-borne contact  dermatitis attending the dermatology outpatient department of the All India Institute of Medical Sciences, New Delhi, India between September 2006 and August 2010 were selected for the study. The study was approved by the Institutional Ethics Committee. Patients below the age of 15 years, pregnant and lactating women, or those with abnormal baseline hematological, liver, or renal function tests were excluded. Written informed consent was taken from all patients. A random allocation sequence was generated using a random number table. Identical sealed brown paper packets containing either 60 or 24 tablets of azathioprine (50 mg) were numbered according to the allocation sequence. Patients were randomly assigned to treatment with azathioprine weekly pulse with 6 tablets every week (weekly azathioprine group) or azathioprine 2 tablets daily (daily azathioprine group), for 6 months in a blinded manner. Antihistamines (cetrizine hydrochloride, 10 mg) once daily orally and clobetasol propionate (0.05% w/w) cream topically were given to all the patients for symptomatic relief initially.

No other drugs (including medications of alternative systems) were permitted. All patients were counseled to use protective clothing and frequently wash the exposed areas with soap and water.

A detailed clinical evaluation was undertaken in each patient. Disease severity was assessed by the clinical severity score (CSS) based on (a) itching, (b) erythema, (c) morphology of skin lesions, and (d) area of involvement. Itching and erythema were graded on a scale of 0 to 3 (0: Nil; 1: Mild; 2: Moderate; and 3: Severe) and morphology was graded on a scale of 0-5 (0: No lesions; 1: Papules; 2: Plaques; 3: Lichenified papules; 4: Lichenified plaques; 5: Exudative lesion). The area of involvement, was graded using a method described by us earlier. [10] Patch testing with a standardized aqueous extract of the plant antigen [11] was performed to confirm the diagnosis. Tenfold aqueous dilutions of the standard extract from 1:10 to 1:100,000 dilutions were used to determine the titer of contact hypersensitivity (TCH). [12] The maximum dilution, which produced a definite dermatitic reaction at the patch test site, was taken as the titer of contact hypersensitivity in that patient. Laboratory investigations including hemoglobin, total blood count, differential count, platelets, serum bilirubin, alkaline phosphatase, transaminases, creatinine, electrolytes, fasting blood sugar, blood urea, urine routine and microscopy, stool examination for occult blood, chest X-ray, and electrocardiogram (ECG) were carried out at the start of therapy and at each subsequent visit. Blood pressure and weight were recorded, and clinical photographs of each patient were taken. Thiopurine methyltransferase (TPMT) enzyme activity was not estimated owing to lack of facilities.

Patients were evaluated monthly to assess the response and adverse effects of the therapy. At each visit the clinical severity score, flattening and healing of the lesions, occurrence of new lesions and overall improvement were assessed. After 6 months, treatment was stopped and the final response to treatment was assessed in both groups. The response was considered to be excellent if the overall improvement was 75-100%; good, if it was 50-75%; and poor, if it was below 50%. The patients in both the groups were followed-up every month for 6 months after stopping the treatment to determine any relapse of the disease. The disease was considered to have relapsed if the clinical severity score increased to more than 50% of the pretreatment level.

Statistical analysis was carried with a data analysis and statistical software (STATA 9.0; College station, Texas, USA). Baseline characteristics were presented as number (%) or medium (range) as appropriate and compared between the two groups using Student′s ′t′ test/Wilcoxon ranksum test or Chi-square test as appropriate. The primary outcome was analyzed by both intention-to-treat (ITT) and per-protocol method. Missing values were replaced by the worst case scenario in the ITT method. Non-inferiority was tested using confidence interval (one sided) approach. The results were presented as absolute difference (95% CI). The relative risk (95% CI) was also calculated.

Of the 72 patients with Parthenium dermatitis who were screened, 60 (43 males and 17 females; mean age 50.9 years (range 30 and 72 years); mean disease duration 7.9 yrs (range 1-30 years)) were included in the study. Forty seven patients (33 males and 14 females) completed the study. There were 25 patients in the WAP group and 22 in the daily azathioprine group [Figure - 1]. The baseline demographic characteristics of the patients in the two groups were comparable [Table - 1]. Five patients (3 in Group A and 2 in Group B) were lost to follow-up; of these, one patient consulted a local doctor for treatment, but reasons for not following up was not known for the rest. Six patients (3 in each group) were withdrawn from the study. In 5 of these 6 patients severe azathioprine induced nausea/vomiting, diarrhea and abdominal pain (3 and 2 patients each in WAP and daily azathioprine groups respectively) lead to discontinuation of treatment and 1 patient in Group B was diagnosed to have pulmonary tuberculosis. Two patients were excluded from the final analysis, 1 patient in Group B failed to follow-up at the 5 th month, while the other from Group A discontinued therapy after developing chickenpox.

Table 1: Baseline characteristics of the patients between the two groups

ITT and per-protocol analysis were performed to compare the treatment outcomes. The primary endpoint was ≥50% change in clinical severity score from baseline to 6 months (excellent to good response) with a non-inferiority margin (∆) of −15%. The rate of excellent to good responses was 81.3% and 89.3% in Group A and Group B, respectively (a difference of −8.0% (−22.0% to 6.8%), which is not statistically significant).

Table 2: Response to treatment as per protocol and intention to treat analysis

The changes in titer of contact hypersensitivity were comparable in both the groups. It decreased in 11 and 14 patients in Group A and Group B respectively, and became negative in 1 patient in each of the groups. The titer increased in 8 and 5 patients respectively in Groups A and B. 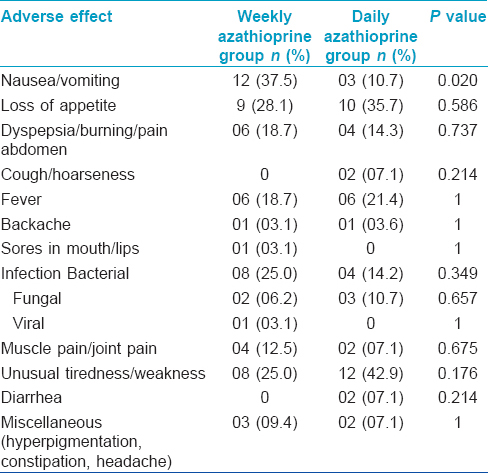 Parthenium dermatitis is a common chronic allergic disease which affects a large number of patients attending the contact dermatitis clinics in our country. The disease is more severe during summer and monsoon due to the presence of large amount of air-borne allergens, sweating and increased skin exposure to environment due to light clothing etc. Corticosteroids are the first-line drugs used in the treatment of Parthenium dermatitis. However owing to its chronicity, these patients require prolonged treatment with corticosteroids which often leads to corticosteroids induced side effects, some of which could be severe and irreversible. [3],[4]

Azathioprine, a 6-mercaptopurine derivative, is a strong immunosuppressive agent which acts by inhibiting activated T-lymphocytes and also has a potent anti-inflammatory effect. It has been demonstrated to be very effective in the treatment of Parthenium dermatitis [7],[8] due to its profound effect on T-lymphocytes, [5] the cells mainly responsible for causing dermatitis. The safety and toxicity of azathioprine have been well studied and the drug has been found to be safe even on long term use without significant side effects. [9]

In a study by Verma et al., 95% patients of Parthenium dermatitis had excellent response with daily doses of azathioprine and there was a decrease in clinical severity score from 64.5 ± 16.3 to 4.3 ± 5.57 (P = 0.01). [8] Similarly in another study, azathioprine weekly pulse dose showed an excellent response in 58% (7/12) patients and good response in 42% (5/12) patients with a reduction in clinical severity score from 40.40 ± 7.95 to 10.9 ± 8.43 (P = 0.002) which was statistically highly significant and the therapy was well tolerated without any significant side effects. [10] There were no significant changes in the laboratory parameters in any of these patients. [10] In the present study the response to treatment with two regimens i.e. azathioprine weekly pulse and azathioprine daily dose are comparable with the earlier studies. [8],[10] Gastrointestinal side effects were, however, more frequently observed in azathioprine weekly pulse group (P = 0.02) [Table - 3] which were managed conservatively without stopping therapy in any patient. Also there were no significant changes in titer of contact hypersensitivity value in either group which is consistent with our earlier observations, showing no correlation between the titer of contact hypersensitivity and severity of disease and/or response to treatment. [13] Therefore, determination of titer of contact hypersensitivity is probably not helpful to assess the treatment response and is not recommended. Transient changes in hematological and biochemical parameters were seen in some patients in both the groups which were comparable and statistically not significant (P ≥ 0.05). The changes returned to normal during the follow-up while continuing therapy.

The thiopurine methyltransferase (TPMT) estimation prior to starting these patients on azathioprine was not done due to lack of laboratory facilities. Moreover it has been shown that the prospective estimation of TPMT enzyme activity does not predict azathioprine induced adverse effects. [14] Also the study by Benkov et al. does not recommend routine TPMT estimation in such patients. [15] A routine monitoring with haematological and biochemical tests is considered adequate.

In conclusion, the present study has demonstrated that azathioprine administered as 300 mg weekly pulse is as effective as azathioprine 100 mg daily in the treatment of Parthenium dermatitis. Additionally, the cost of the therapy is reduced by 60% with this regimen and compliance to treatment is expected to be better even on long-term use owing to the convenient once weekly dose. The only significant adverse effect was nausea/vomiting.

However, our study has the following limitations: (i) small sample size (ii) exact amount of topical clobetasol propionate used by each patient was not determined. The latter is unlikely to have affected the results since the mean pretreatment clinical severity score were similar in both groups and hence the patients in both the groups would be expected to use comparable amounts of the drug. Larger studies, however, are required to confirm our results.